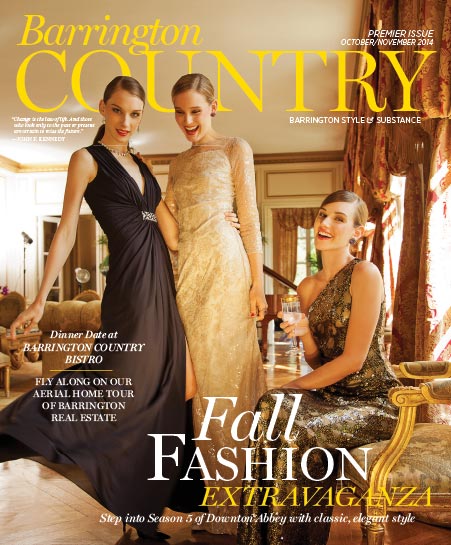 Since our debut in the Barrington area, Country has sought to bring readers the essence of life well lived in our communities. We’ve featured many generous and passionate philanthropic people that pay it forward every day, social events spotlighting the who’s who among us, teens who are making a difference, artists from all walks of life, our community’s rich history, ambitious entrepreneurs, and thriving local businesses—many who partner with us to support our magazine. We hope you enjoy this look back at some of our covers over the past five years—where they were then and what they are doing now. We look forward to the next five years, and beyond. 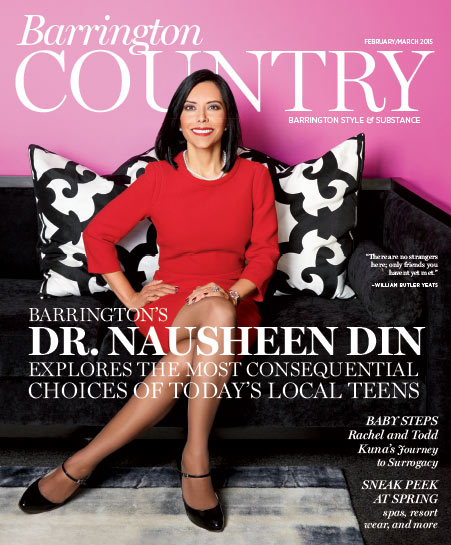 When she appeared on our cover in February 2015, Nausheen Din, MD, was raising awareness of the dangers of “teen sexting,” working on a book, and growing her practice as a psychiatrist working with children and adolescents. Since then, her two children have gone off to college, she relocated her residence to Chicago and added a practice there, and she expanded her work to individuals and organizations across the country. Dr. Din’s focus on her clients’ wellbeing, healing, recovery, and growth is unwavering. She builds on the premise that psychiatric struggles must be understood as an illness no different than cancers, dementia, or a fractured femur. She supports various causes, including Bear Necessities, National Alliance on Mental Illness, and Prevent Child Abuse America. Most recently, Dr. Din has been invited by a major university system to contribute as an advisor for a documentary series, and to educational institutions and Greek systems. Not surprisingly, rather than slowing down or cutting back, she sees this decade as an invitation for personal and professional growth. 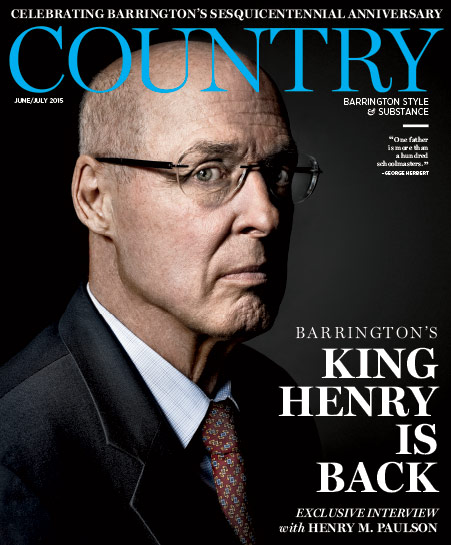 In June 2015, Henry M. “Hank” Paulson (former U.S. Secretary of the Treasury) had just released his book, Dealing with China: An Insider Unmasks the New Economic Superpower. He continues in his role as Chairman of The Paulson Institute, a non-partisan, independent “think and do tank” dedicated to fostering a U.S.–China relationship that serves to maintain global order in a rapidly evolving world. The institute recently announced the launch of a new Green Finance Center, marking a significant step forward in its efforts to promote sustainable economic growth and environmental protection in China and the United States. Paulson is also featured in the 2018 HBO documentary, Panic: The Untold Story of the 2008 Financial Crisis. He was raised in Barrington and maintains a home here with his wife, Wendy. 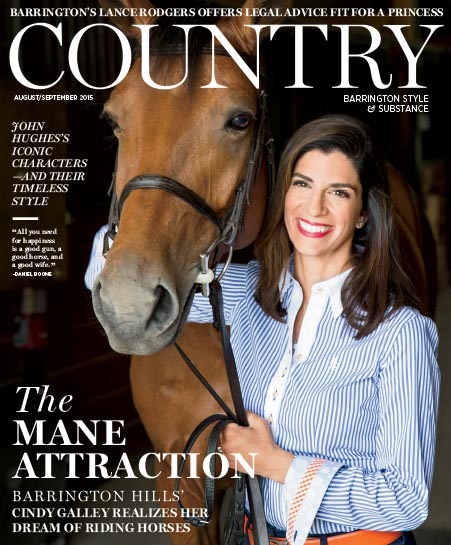 Back in August 2015, Cindy Galley and her daughters were just learning to ride horses and navigate the equestrian world. They had moved from Chicago a few years earlier to Barrington Hills where they built their house and established their family home. Since then, Galley has become fully immersed in the community and the horse competition circuit. She says her own riding has taken a back seat as she plays the role of “horse show mom” with both daughters riding and competing as well as hockey mom. After serving on the board of Barrington Junior Women’s Club for some time, Galley currently serves on the auxiliary board of Barrington Youth & Family Services, chairing its upcoming gala on. She also serves on the board for Barrington Area Conservation Trust and is involved in the Little Garden Club. Galley continues to be a good friend and neighbor to her community and Country Magazine. 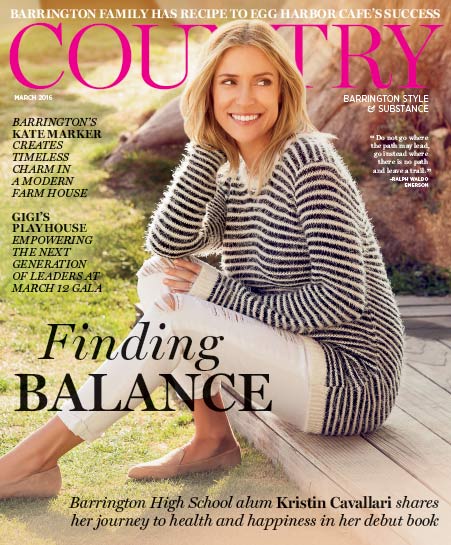 It was March 2016 when Laguna Beach and The Hills star Kristin Cavallari (who spent her junior high freshman high school years in Barrington) had just released her book, Balancing in Heels, which became a New York Times bestseller. Cavallari and her three children now live in Nashville. In the spring of 2018, she released her second book, True Roots: A Mindful Kitchen with more than 100 Recipes Free of Gluten, Dairy, and Refined Sugar. And, in the summer of 2018, Cavallari’s E! reality show, Very Cavallari, premiered. Now in its third season, the show follows Cavallari starting with the opening of her flagship store and Nashville headquarters of her rapidly growing fashion and lifestyle brand, Uncommon James. The brand now has retail locations in Chicago and Los Angeles. We’ll keep our eyes on our own hometown girl for what’s next. 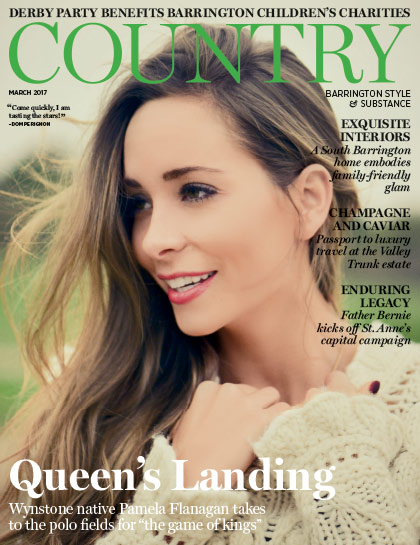 Equestrian, polo goddess, and downright nice person Pamela Flanagan appeared on our cover in March 2017. It was clear this passionate young lady who described herself as “horse crazy” was going places. The Wynstone (Barrington) native, who was on her way to law school at Southern Methodist University’s Dedman School of Law, had already helped start a polo team at SMU and attracted the attention of the U.S. Polo Association to be a model for the iconic U.S.P.A. clothing line. Since then, Flanagan became a lawyer and joined the family firm, specializing in property tax appeals. She is cofounder and president of Women’s International Polo Network, dedicated to elevating women and helping them gain exposure in the world of polo. And she remains passionate about advocating for rescue horses. In fact, two of her own rescue horses— Stella and Nala—competed in the U.S. Women’s Open polo matches in March 2019, which Flanagan’s team won. In October 2019, she became the youngest person ever elected to the board of governors for the U.S. Polo Association. Flanagan recently relocated to Denver with boyfriend and Argentinian professional polo player, Lindor Novillo Corvalan, and is slated to enter the 2020 U.S. Open competition with a team sponsored by Hawaii Polo Life. We’ll be rooting for her and her team. 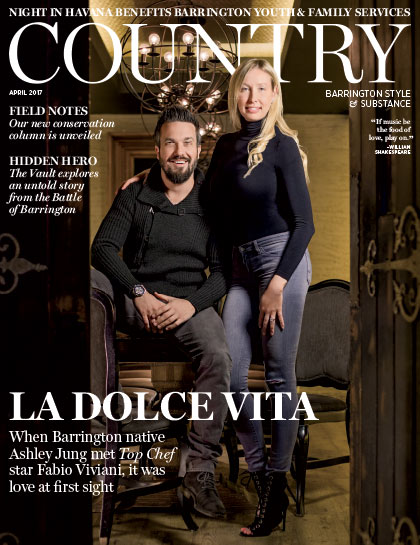 Husband and wife Fabio Viviani and Ashley Jung appeared on our cover in April 2017. The Italian chef, restaurateur, Top Chef contestant, and cookbook author had recently married Barrington Hills native Jung after falling head over heals for the “tall, beautiful blonde.” He had relocated to Barrington that year; the couple had a son named Gage (now 4); and Viviani was building his empire, both in the Chicago area and across the country. By the end of 2019, Viviani had expanded into hotel management and food and beverage, opening a total of 40 restaurants, including several in Chicago (Sienna Tavern, Bar Siena, Prime & Provisions, and Mercato) and the suburbs (Osteria in Downers Grove) to date. He has plans to open 12 more in 2020. Best news to report, Viviani is in negotiations with the Arboretum of South Barrington to open a restaurant right here in our community. Keep your fingers crossed and stay tuned. 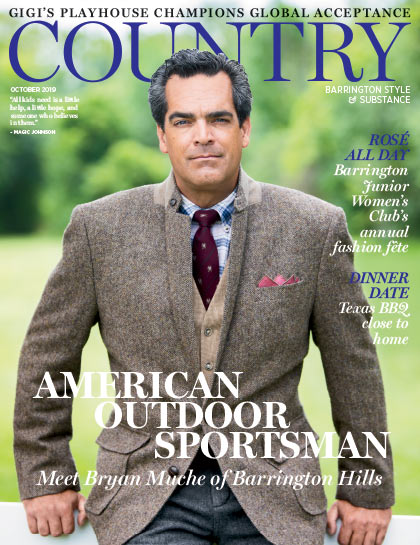 Just last fall, Bryan Muche of Barrington Hills appeared on our cover, sharing his passion for the time-honored tradition of duck hunting, duck conservation, and related philanthropic causes. Since then, Muche has embarked on several new exciting opportunities and projects. In October, he coordinated and led his annual Delta Marsh waterfowl hunt that raises funds for conservation efforts—this time with no electricity or heat in the remote cabin in Portage La Prairie, Canada. Muche has also been delighted to dabble in acting. He’s worked in the background on several movies and television shows filmed on location and at Cinespace Chicago Film Studios, including roles in Empire, Fargo, and new shows for 2020 including Utopia, Channel 11, and Next. He just completed producing a pilot episode for a proposed TV series titled American Sporting Life, a program that celebrates the heritage and culture of an outdoor lifestyle. Muche hopes it will be picked up nationally, by PBS, a cable network, or a digital streaming platform to introduce outdoor experiences to new audiences. Entrepreneurially, he has been working on developing a new approach to matching caregivers and care recipients based upon their shared spiritual beliefs in a senior home care service business (livingcaretoday.com). And, he continues to market and sell his own invention—eco-friendly and humane Catch A Mouse mousetraps, a mouse solution ideal for those with children or pets in their homes (greenbottleusa.com). We can’t wait to see what the dynamic and ever-curious Muche will be up to next.