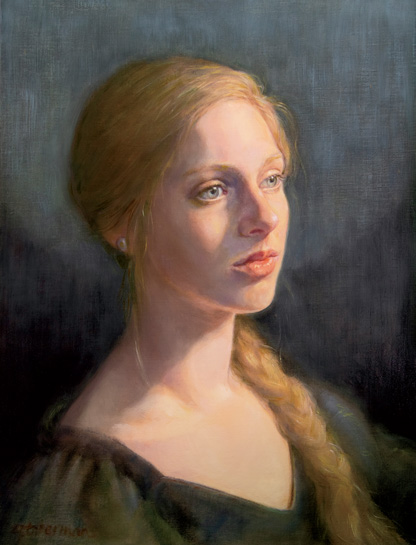 When she was just 7 years old, portrait and figurative artist Anna Toberman submitted her first pencil drawing of the “Draw Winky” cartoon from a contest on the back cover of TV Guide. While she received a polite rejection letter, the die was already cast for her creative life.

“I was always interested in drawing people’s faces,” says Toberman, who grew up in Kansas City. “My parents were proud of my artwork, but they knew that my education should prepare me for a ‘real job’.”

She continued to study art, winning high school art contests, and also loved writing stories for the school newspaper. So, with a full academic scholarship, she double majored in fine art and journalism at the University of Missouri-Columbia, graduating with a bachelor’s degree in fine arts (drawing and painting) and a bachelors in journalism (magazine sequence). This combination of art and journalism led Toberman to a career in publication design. 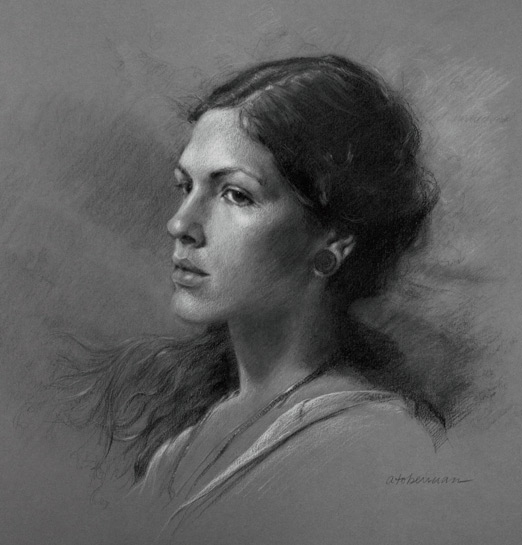 “Undeterred” was also drawn in charcoal and was published in the “Figurative Realism” issue of PoetsArtists magazine.

After graduation, she moved to the Chicago area and became a senior designer for large corporations, which involved more publication design and also art direction of illustration and photography for annual reports and marketing materials.

“This was during the time that computers began to dominate the production process, and I realized that I missed doing hands-on art,” she recalls. “I needed a way to express myself that was unrelated to any business objective, so I started taking classes at the School of the Art Institute and with a private instructor.”

But as many artists find, her art journey was put on hold for a while after she married and started a family. Still, her need to create—to draw—was strong and she found time to take figure drawing classes one evening per week at Harper College for several years.

“I have always believed that drawing is the foundation of art, and that class allowed me to gain practice working from life,” she says. “Over time, I realized I needed to improve my skills and learn to work in color, so I found an evening class at the Palette and Chisel Academy in Chicago. It was taught by Romel de la Torre, an artist whose work I greatly admired. And, it turned out that Romel also taught from his own studio in Arlington Heights, just 5 minutes from my house! I was very lucky to study with Romel, a master artist whose paintings are full of luminous color.”

It was in large part Toberman’s commitment—to elevate her art skills by studying with master artists—that helped her realize her creative vision of a realistic style that expresses more than accurate representation. It also laid the foundation for becoming a sought-after and award-winning working artist.

“Winter Memory,” started from a life model. The model was a Barrington resident, who reminded Toberman of a character in Dr. Zhivago.

Along the way, Toberman founded her own business, Redrock Design Company, in 1997, which allowed her to assist other companies with marketing, presentations, and publications while continuing to draw and paint. In time, she established Anna Toberman Fine Art, an art business focused on portraiture. She works with patrons who commission portraits as family heirlooms, and she also creates personal works that reflect an interest in the human condition and spiritual development.

“My greatest interest continues to be portraits in a realistic style,” she explains. “I love to learn about the people who pose for me and then communicate something about their inner life in the portraits.” Toberman works in charcoal, color chalks/pastels, and oil paint from both photographs and life. “Working from life is best, but if I am able to capture detailed photos, I can finish a portrait from these reference pictures.” 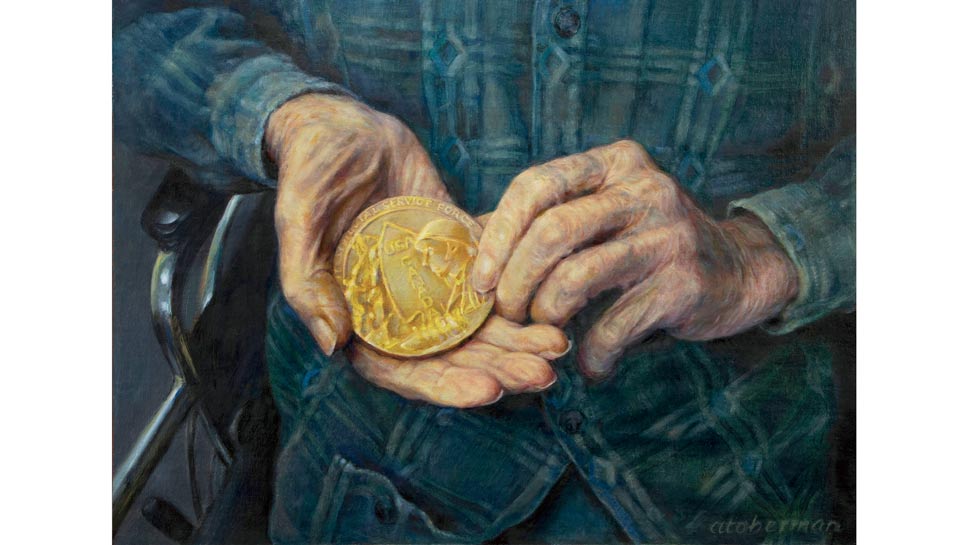 “Eli’s Medal,” oil painting of the artist’s father’s hands holding a Congressional Gold Medal for his service in WWII, as part of the First Special Service Force, Devil’s Brigade

And, she continues to learn and stay active in the art world, taking classes at Northlight Artists Studio in Arlington Heights and participating in open studios in the nearby suburbs whenever she can. She hopes to attend an oil painting workshop later this year as she was awarded a 2020 Shirl Smithson Memorial Scholarship by the Oil Painters of America for art education.

“Working from a live model is great training for the eye and something that must be done consistently, just as an athlete must work out to stay strong and improve their skills,” she says.

Toberman has belonged the Barrington Cultural Arts Center, which was very recently renamed to Barrington Area Artists Association (BAAA), for about 4 years. She participates in some of its group shows, such as the Deck the Walls festive holiday art exhibition at the Barrington’s White House as well as the group’s Life on the Back Nine portrait series a couple of years ago.

“The group invited active senior citizen models from the Barrington community to pose for portraits, and I am proud to have created three pastel drawings of these interesting, vibrant  people,” she adds.

In the coming months, Toberman will be lending her design talents to help BAAA redesign its logo, website, and other materials. Her painting, “Spellcaster,” was selected to show in the National Oil and Acrylic Painters’ Society Best of America Small Works 2020 in Annapolis, Maryland, and she’ll be an exhibitor at the Barrington Art Festival in May. 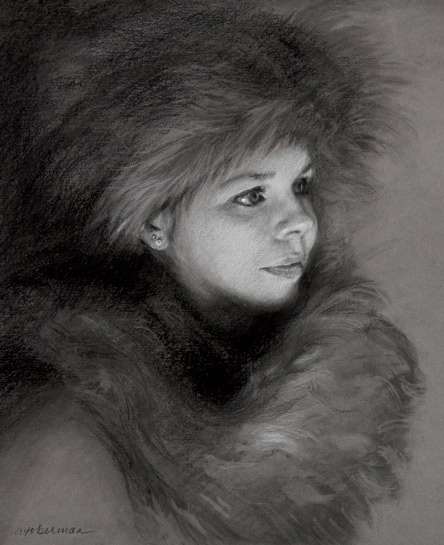 “Innocent”, a charcoal drawing, was a finalist in the FASO BoldBrush contest and was published in “Strokes of Genius – The Best of Drawing – Creative Discoveries”

Among her many awards, Toberman’s drawing “Innocent” was judged a finalist in the Fine Art Studios Online Bold-Brush competition by Shana Levenson and was also published in the book Strokes of Genius – The Best of Drawing – Creative Discoveries, by North Light Books in 2017 (editor Rachel Rubin Wolf). Her drawing “Undeterred” was published in Figurative Realism, the 100th issue of PoetsArtists magazine, curated by Dirk Dzirmirsky, in 2018. Her oil painting “Michael” was selected by judge Rick Delanty as an Emerging Artist “Gallery Rep” Finalist in the May 2019 Art Muse Contest. She has also been honored with several awards of excellence by the Artists Association of Elk Grove Village in its annual Art Centre juried shows.

“Beyond achieving a realistic likeness, my purpose is to discover and illuminate unique qualities about each person,” sums Toberman. “For portrait commissions, my job is to show the subjects as they wish to be seen for the current time and future generations. I am honored to be chosen for this important work.”