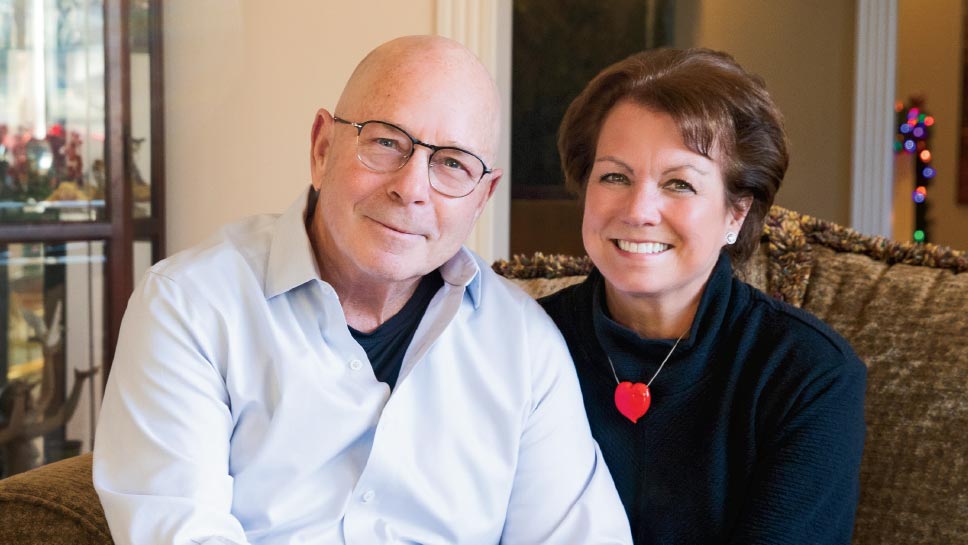 The year was 1996 and both Kelly and Mike had children involved in the BYFS (Then Barrington Youth Services) Rainbows program, a divorce support group for families. They each had three children. And both were determined to get their kids (and themselves) the support they needed to get through their respective divorces with positive coping and life skills. The couple had a few things in common.

And they were both single.

“When I saw Kelly there, it motivated me to come back the second time,” Mike recalls. “That second time, I walked up to her and said to her, ‘You’re not from around here, are you?’ to which Kelly replied, ‘Is that the best line you’ve got?’” He hadn’t done this in a long time. 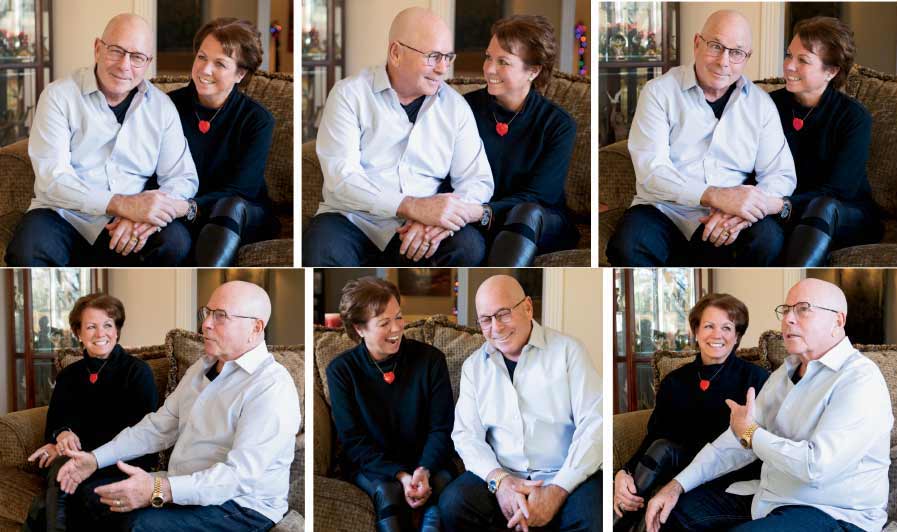 “It was a problem finding her phone number. It was unlisted, and I was nervous,” laughs Mike. “So I went to my daughter Lauren (now Klauer) who was 15 at the time. Her answer was, ‘You’ve got one of the biggest mouths in Barrington! What’s the worst she can do, say no?’” Mike, who served as president of District 220’s school board at the time, has a reputation for “knowing everyone around Barrington.”

What ensued between Mike and Kelly was a courtship and blending of families—their own Brady Bunch of sorts. Kelly relocated with her children from McHenry to the Village. After the couple married in 1999, the whole family moved to Mike’s home in South Barrington, where he has now lived for 38 years. The couple joined forces in both family and business, with Mike syndicating and developing real estate ventures since 1995.

But it would take hard work, patience, and the skills they’d learned at BYFS to make all of this work.

On the cusp of its annual gala, this year themed “The Greatest Show on Earth,” on April 18, it is an ideal time to reflect on BYFS’ many success stories and the services provided by this vital community organization. 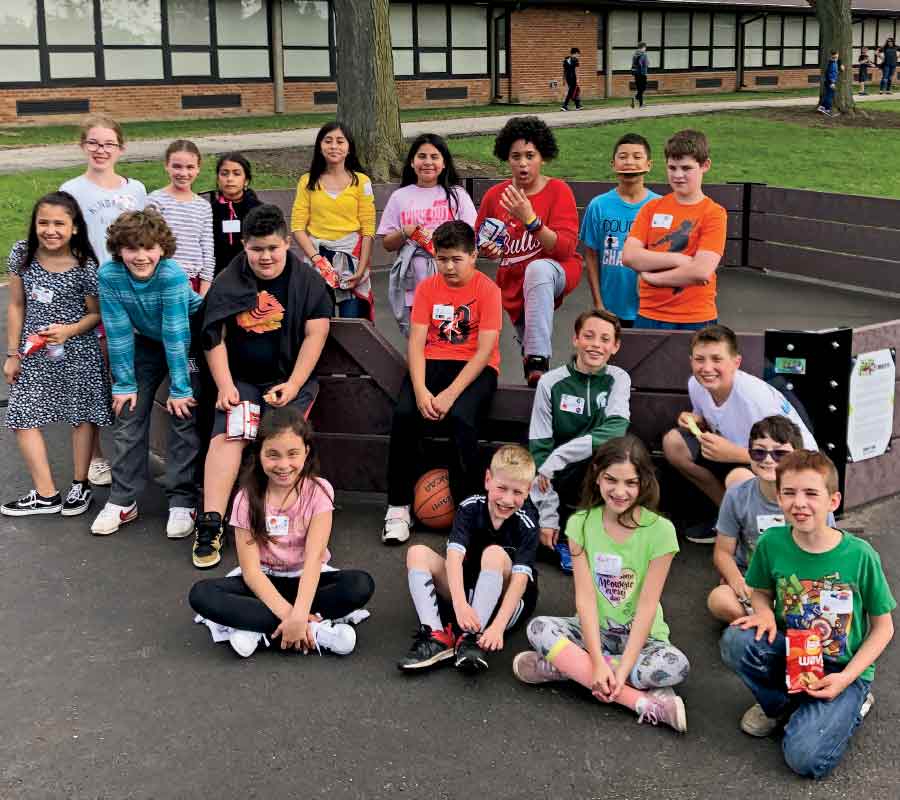 Founded in 1972, BYFS is the longest standing community resource in Barrington with a singular goal—to provide quality, compassionate counseling services and community outreach to support the social, emotional, and psychological well-being of youth and their families in the Barrington area. For some, it’s counseling through a crisis. For others, it’s a helping hand to get out of a challenging life situation. From depression and peer mentoring to issues related to parenting, substance abuse, or life transitions, the agency has been doing the heavy lifting of keeping our community strong for nearly five decades.

“Monies raised at the gala will go to fund advances, improvements and expansion of counseling services and prevention programming for the community,” says Betsy Wintringer, Executive Director of BYFS. “In addition, BYFS remains committed to offsetting the cost of delivering critical counseling services to anyone in need in the Barrington area regardless of their ability to pay.”

Funds are much needed and well used. More than 75 percent of those receiving services from BYFS do so on a subsidized basis. And, many of those utilizing these services might not receive the help they need otherwise. BYFS hopes to raise $250,000 at this year’s gala.

“BYFS’ educational and community-based programs and strategies are designed to reach people outside of traditional health care settings and often impact individuals and groups who would not typically seek out assistance through counseling services,” says event co-chair Cindy Galley. “BYFS responds to the needs of the community by ensuring that our organization is flexible and meets the changing needs of the community while removing the stigma associated with seeking assistance.”

Kelly and Mike Berkowitz did not let any perceived stigma stop them from seeking support for their children. The Rainbows program (now offered under a different program name based on demand) was designed for children with parents going through a divorce or for those who had lost a parent. The parents meet separately for their own support group.

Looking back, the Berkowitz’s can say that they’ve faced many challenges in their 23 years together. “We raised six kids here, who went through the Barrington school system,” says Mike. “We look back and realize that we thought it would be a lot easier to raise a blended family.” They both agree that the support they received and the communication and other skills they all learned at BYFS went a long way to getting them to where they are today.

Always paying it forward, Kelly volunteers with the Boys & Girls Club at Sunny Hill School, teaching there two days per week. “We wanted to do something to give back to the community by tutoring and mentoring kids in healthy eating habits,” she says. “It’s similar to Rainbows, helping kids transition and work on developing positive skills and making changes in their lives.”

As Noni and Pop to all of their grandkids (and their grandkids’ friends), their home is a happy gathering place for family get togethers. Mike built a Tiki bar (Kelly said yes when he proposed the idea) next to the built in pool in the backyard, and they’ll sometimes have upwards of 30 people sleeping and camping for family weekend reunions.

“Kelly and I feel very, very lucky to have picked Barrington as a home, because of all the giving that occurs among the people here,” Mike adds. The couple continues to spread the word and support the work at BYFS in whatever ways they can.

“With a really fun circus theme for our guests, we’re having a great time planning and designing this year’s gala,” says event co-chair Crystal Pepper. “We have some fun surprises in store for the evening and we’re anticipating a sold-out event again this year.”

When Berko met Kelly at Barrington Youth & Family Services, so many lives were positively impacted. 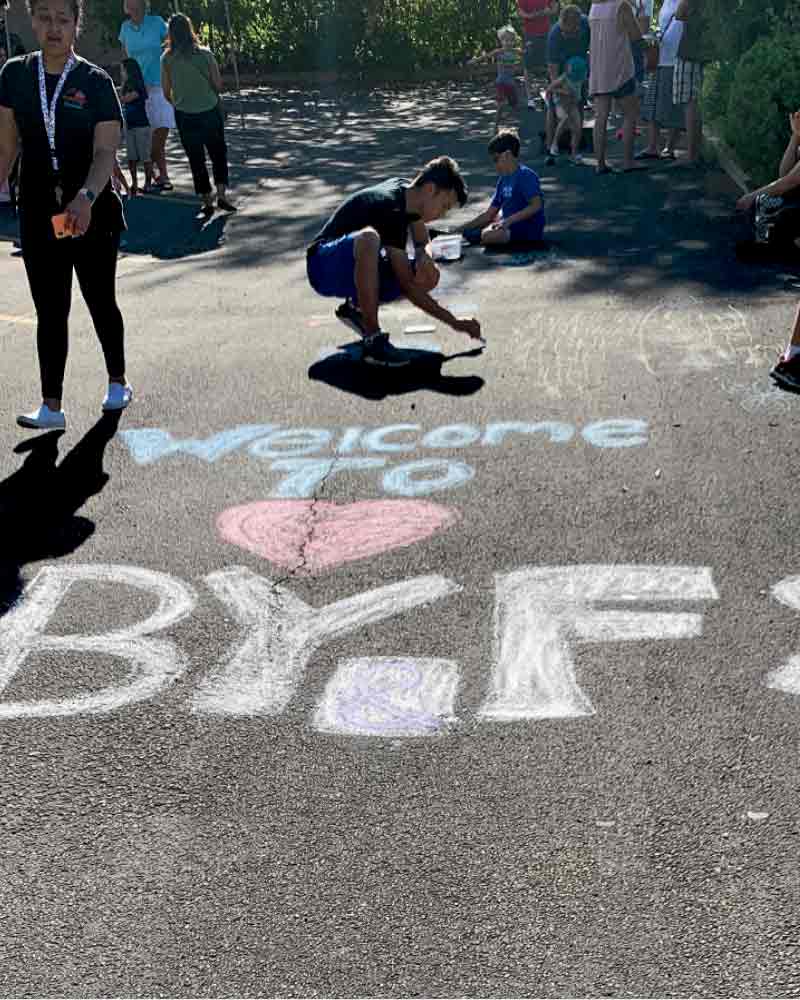 Jared’s mother knew he needed help, so they looked for places near them in the community and found Barrington Youth & Family Services. “I always kind of knew there was something off about me, so one day I decided to speak up. I was diagnosed with clinical depression,” he says. “My counselor and I instantly connected, so I felt like I could trust her. I was able to tell her anything on my mind without her judging me. And, because I was able to tell her anything, she helped me figure out what the “seed” was, if you will, to my other issues. It worked because she was an adult and I could trust enough to tell her anything; she helped me find a solution and coping mechanisms. I would say to others who think they need help not to be afraid! Getting help was the best decision I have ever made. I’m in a place in my life I never thought I would be if it wasn’t for me seeking help and the support I received from BYFS.”