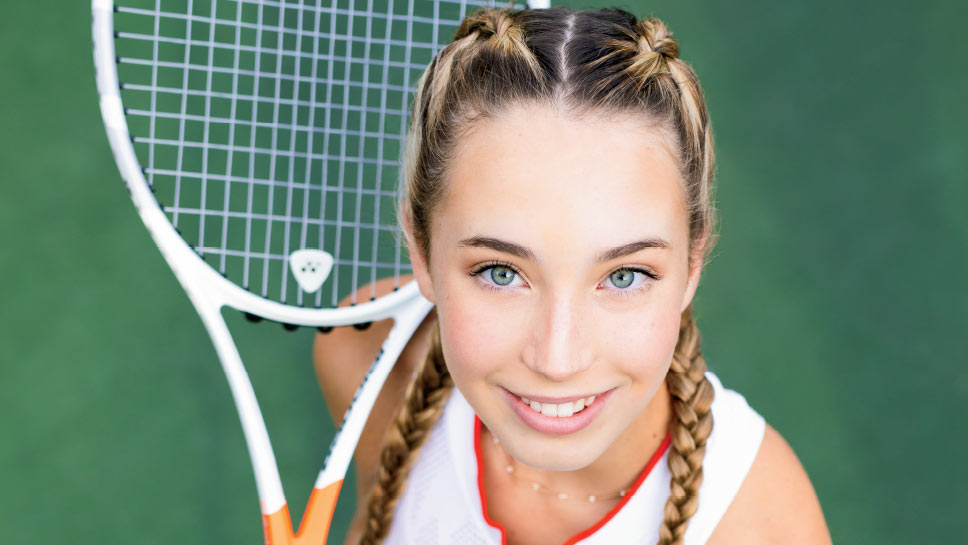 “I got lost on my first day,” a sheepish Hills, weeks later, recalls. “And I was late for a couple of classes. The teachers, thankfully, let it go.”

But Hills, a 5-foot-8 lefty, felt right at home on a BHS tennis court from the start. Her record at No. 1 singles for the Fillies’ varsity tennis team was a sparkling 29-4 for the fall season, with the setbacks coming against reigning Class 2A state singles champion Kiley Rabjohns of Lake Forest High School.

Hills’ tennis game features a wide variety of weapons, including a heavy, high-bounding serve with tons of spin, a hard-to-handle topspin forehand, an elegant slice backhand, and feathery touch near the net. Her arsenal, in a nutshell: potent potpourri.

“Madeline is certainly good at mixing it up in matches,” says first-year BHS tennis coach and math teacher Heather Graham, adding Hills embraces the challenge of facing the state’s elite netters. “What I also like about her game is, she’s always thinking in between points. At times, against a certain opponent, maybe a part of Madeline’s game isn’t working as well as it did against the girl she played last week. But that never gets her down; Madeline, who’s focused and driven and full of energy, figures it out, tries a different strategy.”

In mid-September, against Palatine High School’s top singles player, Hills’ eye-catching, all-court game was on full display. She constructed the points efficiently and effectively in the road match, picking the ideal moments to either unleash aggressive shots or strike safe shots. Hills’ service winners were loud, her drop shots peaceful. The Pirate on the other side of the net attempted desperately to settle into a rhythm, any kind of rhythm, but ended up scrambling here, and conceding there, instead.

Hills’ slice shots? Those stayed oh-so-low. Imagine wielding a racket and trying to hit a groundstroke while sprinting toward a worm-burning ground ball in baseball. You’d either pop it up or give up.

“I love to play with a lot of variety,” says a grinning Hills, who started playing tennis at the age of 4 or 5.

Get accustomed to Madeline Hills, the ace tennis player—and the consummate team player.

“Madeline,” Graham says, “is feeling more and more comfortable with the community aspect of playing for her high school and for her teammates. We’re making the transition to high school at the same time, since I taught math in middle school before this school year.”

Barrington High School’s No. 3 singles player, Olivia Paik, is another freshman on varsity. She always sits next to Hills on bus rides to road duals and weekend tournaments.

“We talk a lot, and our conversations aren’t just about tennis,” says Paik, who, like Hills, attended Barrington Middle School-Station Campus. “It’s nice being around Madeline, and she’s fun. On the court she’s calm and very consistent. That loopy forehand she hits, her backhand slice—it’s never easy, competing against her. She … does … not … miss.”

A hit soundtrack, to a grateful Hills, is the chorus of cheers she hears from her teammates after thwacking a clean winner down the line or cracking a no-doubt-about-it overhead smash. She then returns the favor after each of her matches, applauding for one teammate one moment and roaring for a BHS doubles team the next.

“It definitely helps, getting constant support from my teammates throughout my matches,” says Hills, the daughter of Tom and Darby Hills and the big sis to Tommy and Jack. “It motivates me, knowing they’re behind me and care about how I’m doing. Playing high school tennis is way less nerve-racking than playing a singles match in a USTA [United States Tennis Association] tournament during the summer, where there are few people there for you and it’s just you doing all you can to stay positive and pump up yourself.” Hills happens to be the IHSA 2A Sectionals’ No. 1 singles player and the Mid-Suburban League conference champ.

Barrington High School sophomore Nayana Ramesh, the Fillies’ No. 2 singles player on varsity, can never tell if the humble Hills is winning or losing a match. That’s a good thing, especially in a back-and-forth battle, because it means Hills is focusing hard on her game plan and thinking about the next point rather than stewing about something that didn’t go her way.

“Madeline concentrates when she competes,” says Ramesh, who got to know Hills at USTA tourneys. “When I watch her play, I notice her determination. She does not like to lose; none of us do. But what Madeline truly enjoys is every moment she gets to be a part of our team.”