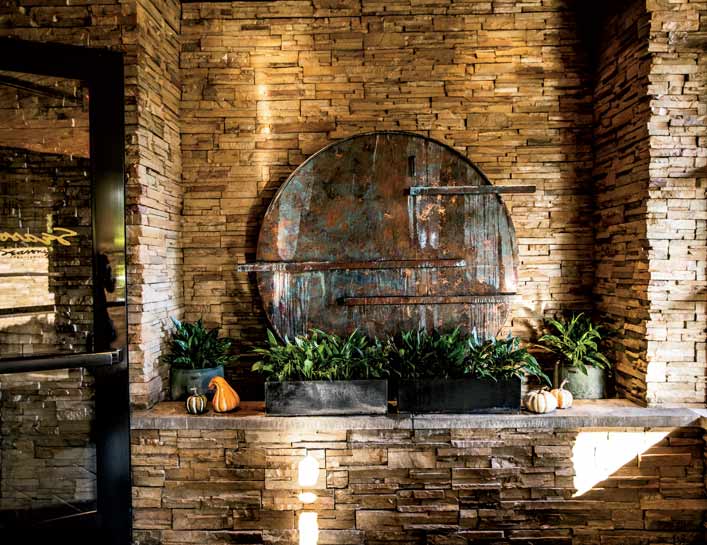 I can’t remember the last time I’ve paid any attention—let alone felt compelled to write about—a set of bar coasters, but the simple paper squares that were slipped under our drinks at Seasons 52 in Schaumburg say a great deal about its charming identity and enduring appeal.

In terms of material, they’re no different than your typical pulp paper table guards. In a room flush with enough Prairie style cherry-stained wood furnishings to make Frank Lloyd Wright’s head sing, they’re simply a good insurance policy against sweating cocktails and water stains. But in practice, they’re something more: a reminder of how much inspiration can be taken from the changing of each season.

Each coaster is illustrated with a charming still life drawing of an iconic fall fruit. A glistening green pear. A juicy lemon. And a bright red teacher’s apple that’s so perfect looking you’d swear it was sketched after a trip to the Garden of Eden.

Next to each of these illustration is a simple one-word title: Autumn. 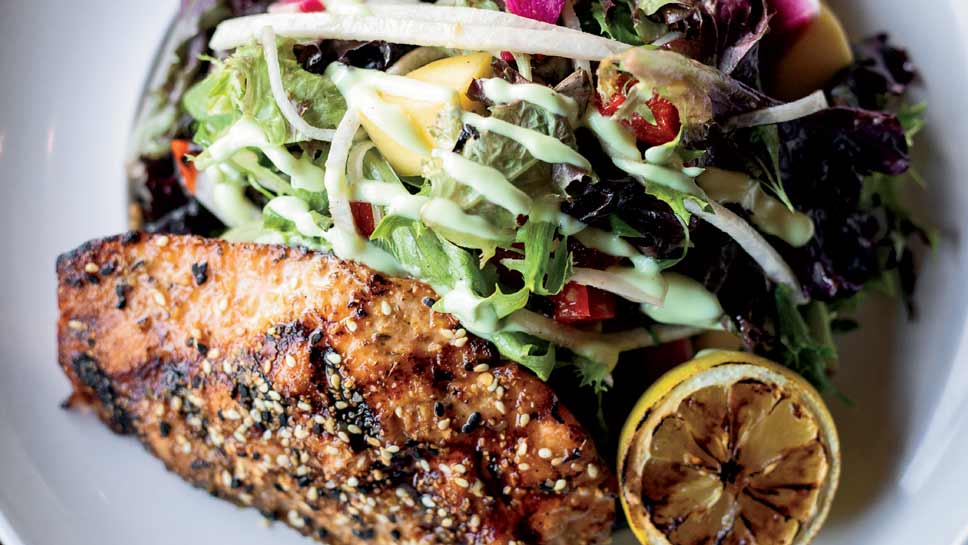 Since Seasons 52 is a sprawling restaurant chain, one might be tempted to assume this is pure marketing pablum. At this point, is there a chef in North America that doesn’t sing the praises of seasonal dining? Unfortunately, far too many chefs give lip service to seasonal cooking, then promptly head back to their kitchen and start squeezing sauces out of plastic pouches.

Truth is, I’ve been to expensive three-star chef-driven restaurants that couldn’t match the level of knowledge and pure old-fashioned charm of the waitstaff at Seasons 52, which spoke with such wisdom about the ingredients and the kitchen prep that we  allowed our server to guide our order.

The restaurant’s offerings change roughly every three months to align with what Mother Nature is nurturing. For the fall, that means apple slices are slipped into a baby kale salad topped with a fig-pistachio salad. Brussels sprouts come glazed with a sticky truffle-honey glaze, and the house-rolled lasagna is swirled with spinach leaves, butternut squash, and a variety of different mushrooms.

As evidenced by its coasters, there are all sorts of little things that Seasons 52 does right. Each menu description comes with a calorie count for the more health-conscious among us. The restaurant’s bargain $19 wine flights aren’t tasting portions of overpriced table wines but rather quality offerings from Caymus vineyards in Napa Valley. And its prices are downright affordable, including an $18 autumn-themed Root & Vine three-course tasting menu that runs through November 18. 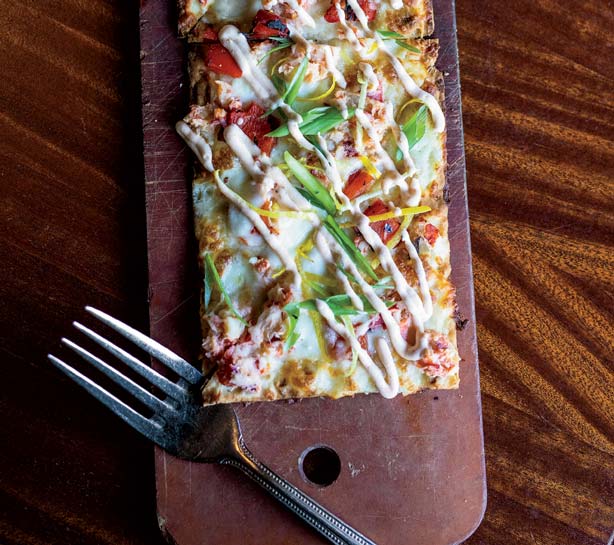 We were struck by how light and airy so many potentially heavy fall dishes proved to be. A lobster and mozzarella flatbread—made with a crust as thin as two sheets of phyllo dough—comes drizzled with a sauce that’s as light as olive oil but tastes like a lobster bisque. And a semi-sweet Korean-style short ribs app, is set under a blizzard of shaved scallions with little dollops of sriracha sauce.

You can sense, from these two appetizers alone, Seasons’ winning formula. Crisp seasonal greens, rich proteins, and manageable portions all buoyed by creative sauces and condiments. Take the house’s pitch-perfect preparation of our cedar-plank roasted salmon, which comes glazed in a dill mustard sauce that plays with fall tubers and vegetable notes the way honey mustards play with summertime sweetness. And a hearty portion of sea scallops are set atop a risotto made with goat cheese, which are more tart and earthy than you typical butter-chicken stock affairs. 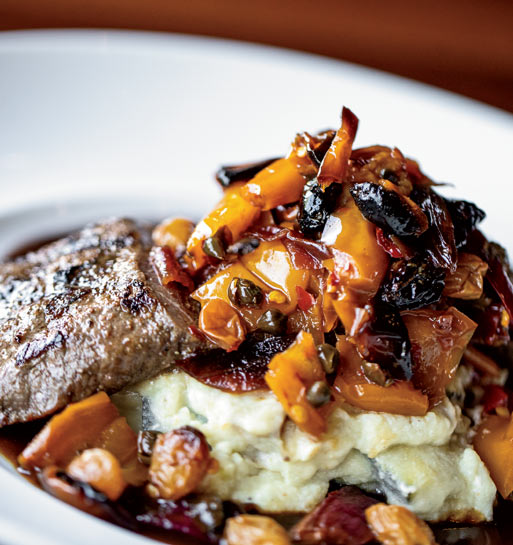 But the real triumph is the kitchen’s kona-roasted lamb loin, which we were told was the first bone-free lamb ever attempted at the restaurant.

It’s a keeper. The coffee crust mellows out what, in lesser hands, might be an overly gamey meat. Add the roasted pepper chutney, which leans on the Greek table’s love of raisin-y sweetness to create a classic Mediterranean aigre-doux—sugared, spicy and acidic—that’s an ideal pairing for an inspired zucchini potato mash. 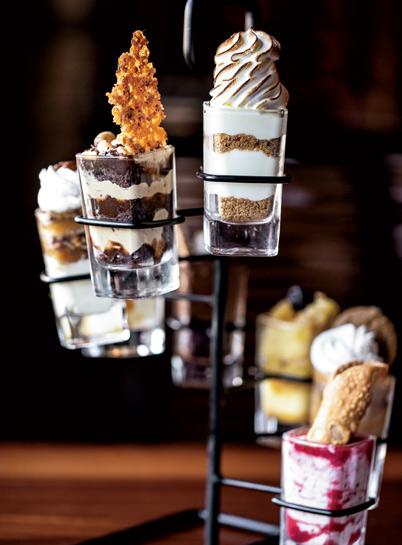 I think it’s rather brilliant, after all these carefully crafted calorie-controlled offerings, to find that Season’s iconic dessert flight is a “to-hell-with-it” splurge. Simply put, it’s one of the most Instagram-worthy desserts in the area. Eight tiny desserts are served in the dessert equivalent of shot glasses, each placed in wire-framed holder that looks like the giant winding staircase from Cinderella. It’s an edible fairy tale that plays with some of those very same fruit flavors that were on ours coaster: mini pumpkin pies, pecan pies, and key lime pies. As our server noted, it’s a pre-emptive strike on the holiday season, which reinforces not only the advantages of eating in time with Mother Nature’s schedule but dining at a restaurant that tastes great in any season.

You can go wrong with the 52 wine selections—thus the name Seasons 52—but the strikingly original and downright colorful cocktail list was built for autumn nights by the fire. 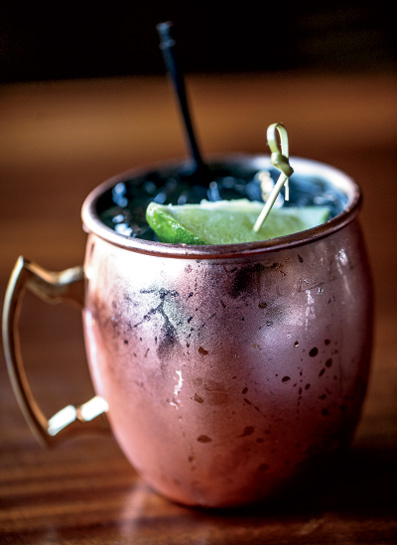 Forget those mules from Moscow. By adding a splash of apricot-scented Riesling to a heavy dose of Ketel One Peach and Orange blossom vodka delivers something approaching a Georgia mule: light, spritzy and blooming with citrus notes. 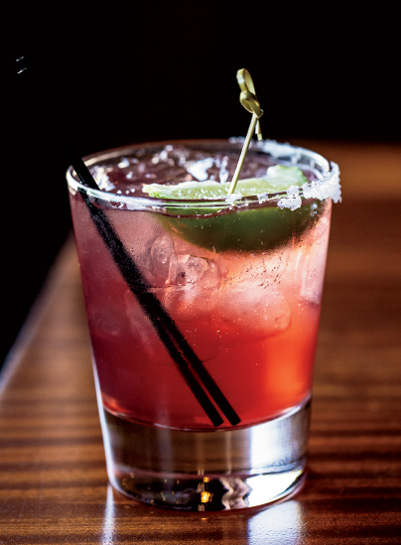 When in doubt ask your servers what they drink once the front doors are closed. This particularly smooth blend of Patron Citronage orange liquor, pomegranate and Chavo Malo tequila looks like smashed rose petals in the glass and has a wonderful, almost Middle Eastern flavor to it.