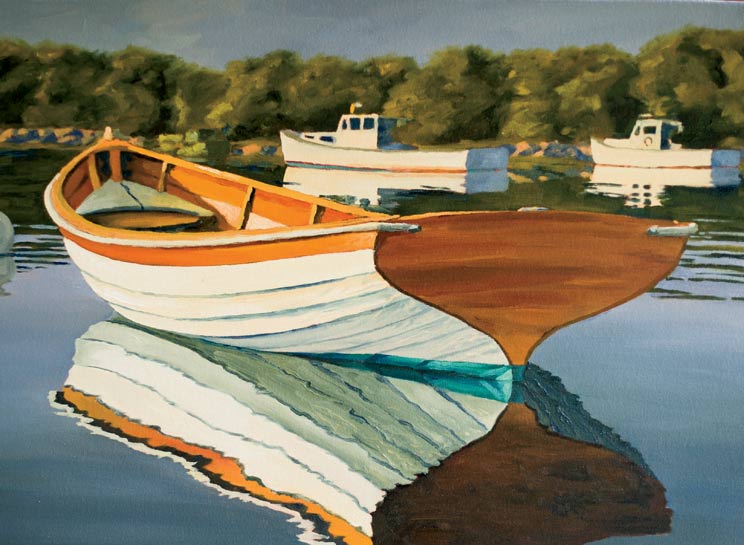 Indiana’s White River winds its way through the heart of the state, from near Spencer to the southwest, to where it peters out past Muncie to the northeast. Growing up in the middle, where the river flows through Indianapolis, Barrington-based artist James Root had an idyllic, water-filled childhood. Those early impressions of water, and the wide-open rural landscapes of the Midwest beyond, remain Root’s favorite subject matter as he paints.

“I literally had to run just 50 feet down the hill to be diving off the dock or into my boat,” Root recalls. “My best friend lived about a half mile down the river, so I’d go down to his house in my boat, or he’d get in a boat and come up to see me. It was almost a Huckleberry Finn and Tom Sawyer experience. Being in a boat was the ultimate freedom.”

Root’s river ramblings deepened his keen powers of observation, and his interest in the boats themselves. 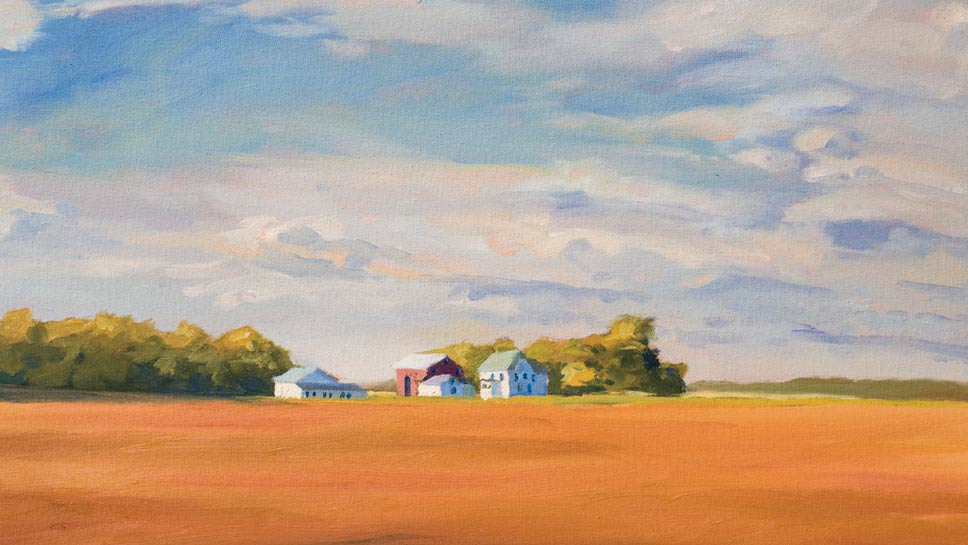 “I always had a boat,” he says. One was an old Canadian fishing boat with two cockpits. Another was a tiny fishing boat: just a little wooden runabout. I’d buy them with money I’d made cutting lawns and shoveling show. And then I’d fix them up and maintain them, sanding them down every year, and putting on a new coat of varnish.”

Root’s father, who spent years as a National Geographic photographer, and then public relations chief for a huge international firm, encouraged James as he started to capture the fleeting moments he saw with a camera, and then, in watercolor paintings.

“One of my favorite memories,” says Root, “is of the day I tied my boat up down river to paint a watercolor. There was this dilapidated old white clapboard building where they used to rent canoes long before I was born. I remember just sitting in my boat, dipping my brush in the water and painting the scene.” 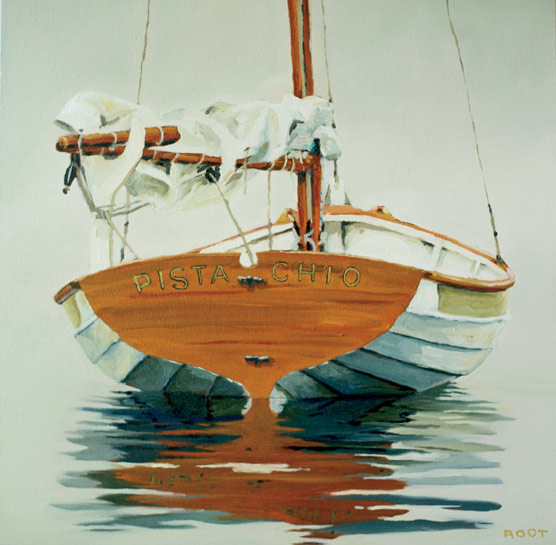 Although he can’t recall the specific moment he decided to be an artist, Root says he was always doodling, sketching, or painting something. And several of the Root family’s friends helped inform this natural inclination.

“One of our good family friends, George Bredewater, was a man who never finished high school yet rose through his artwork to become CEO of the Indianapolis Water Company. He was just a complete character who was very passionate about art and helped me realize that that was an OK thing for a grown-up,” Root recalls. 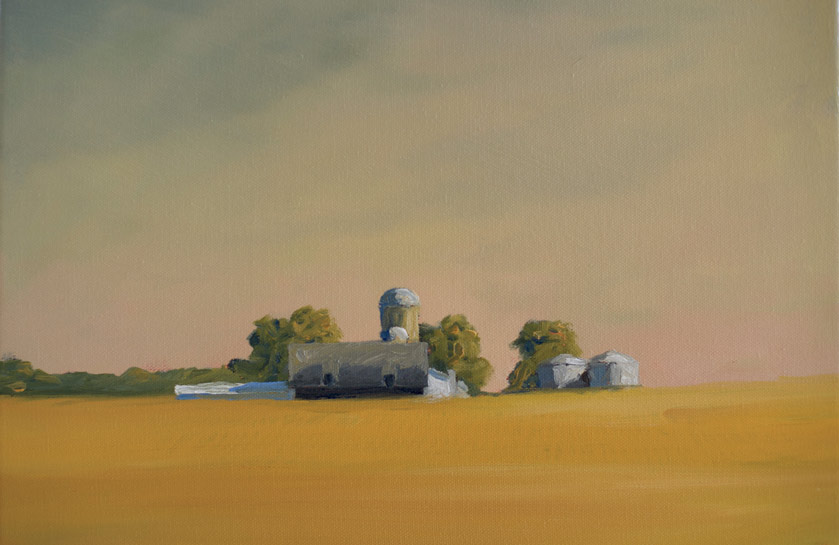 Root went to North Central High School in Indianapolis, an institution with a diverse art and trade curriculum that put music, theater, and fine art on equal footing with academics. While there, Root honed his skills as a photographer, developing his lifelong habit of using the camera to capture images and moments he would later develop into paintings. 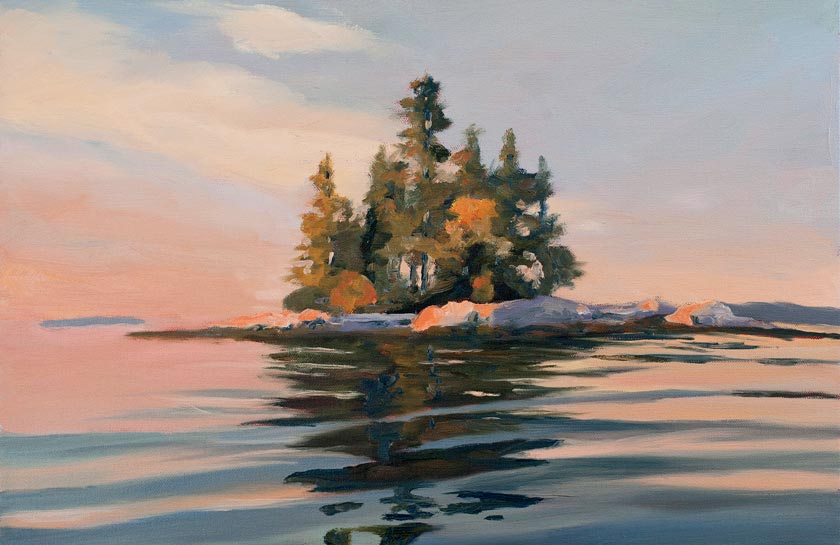 When it came time for college, “I chose only to apply to colleges with solid art programs and there was never any pushback from my parents,” says Root. “They never suggested I have a backup plan. I think they knew I really enjoyed being creative and artistic and would be happiest—and therefore successful—if I headed in that direction.”

Root studied graphic design at the University of Cincinnati, known for its Bauhaus-inspired design program, and its work study program. From the time they are sophomores, students there split their time between school and work, spending two quarters in one, and two quarters in the other.

For Root, that meant stints working for a graphic design studio, a commercial photographer, National Geographic’s children’s books and magazines division, and finally, an ad agency in Chicago.

Within two weeks of college graduation, Root married his college sweetheart Elizabeth and moved first to Evanston, and then Barrington, as he launched his career in advertising. This led him to work for several agencies, including J. Walter Thompson, Ogilvy and Mather, and Young & Rubicam before  he and his business partner Keith Condon formed their own agency, Condon+Root LLC.

Fourteen years ago, James and Elizabeth also purchased a home in Maine. Through it all, Root’s love for painting and photography endured.

“Advertising was extremely satisfying for me as an artist. I got to draw all day long, creating storyboards for TV spots or creating layouts. I was able to work with type, film, music, photography, illustration, animation, and so much more.”

And at home, “I continued to paint and draw on my own after hours,” says Root. “Painting was a place I could satisfy my need to create art and not worry about what a client thought.”

“The light in Maine has a quality that is pretty unique and really inspiring,” he says. “We’re surrounded by beautiful white vintage homes, a harbor full of vintage lobster boats and sailboats. The town landing bristles with dinghies of all shapes and colors. The water on the ocean has a silky quality that is very different from freshwater.”

To capture all of this, Root often heads out in his kayak before dawn, paddling to islands he knows he’d like to paint.

“I always carry a camera with me—it is my primary tool to capture images that are fleeting and allow me to come home and work from them. Being in a kayak also gives me a unique perspective. I’m basically at the same level as a duck and am able to move about to see perspectives that would be impossible to view any other way.”

Root also finds Midwest vistas inspiring. “I love the flatness, and the farms that dot the landscapes,” he explains. “When I paint a cluster of farm buildings amongst a sea of corn or soybeans, it’s very much like painting a small island on the water.”

Most recently, Root has been trying his hand at portraiture, using film slides his father took long ago. “My father’s old Kodachrome slides are a great trove of material for me to work from. Most are people and places that I grew up with and love.”

Root’s work has been shown at the former Tina Han gallery in Barrington and the Philippe Guillerm Gallery in Waldoboro, Maine. He will be featured at Barrington’s White House “3rd Thursday Art Night Out” on November 21 from 6 to 8 p.m., barringtonswhitehouse.com/events/. To view more of Root’s work, visit jamesrootart.com.