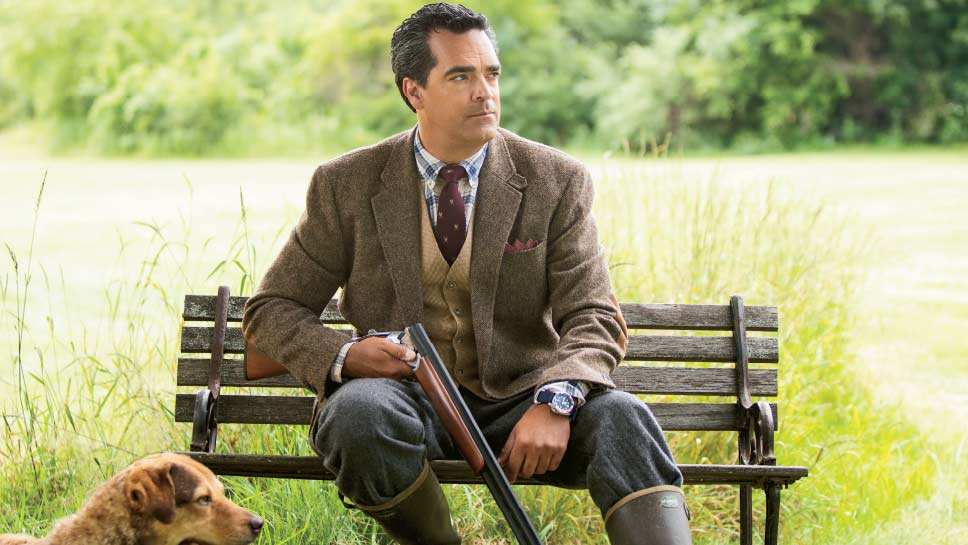 Bryan Muche’s earliest memories of adventure in legend and lore were found at the feet of the old duck hunters in their lively accounts of hunting the Horicon Marsh, an area designated as a wetland of international importance nestled in rural Wisconsin.

Raised in the hunting tradition as a young boy growing up in Elkhorn, Wisconsin, he made frequent trips with his father to hunt waterfowl with his grandfather, Walter Muche Sr., at Horicon—the largest freshwater cattail marsh in the United States. Now, more than three decades later, the Barrington Hills resident remains committed to his passion for hunting, the outdoors, and just as important, the conservation of wildlife, waterfowl, and the native habitats and wetlands where they live.

Times were different when Muche’s grandfather was living on his homestead bordering the marsh in Central Wisconsin in the early 20th century. He was an active hunter and fisherman out of necessity to put food on the table.

“Growing up, I heard stories from the old duck hunters, embellishing and telling great tales that kept me on the edge of my seat,” Muche says. “My grandfathers, uncles, and father together planted the seed—that the adventure to be had was in the outdoors.”

Muche set out to find his own outdoor adventure, participating in his first hunt at 12 years old with these mentors. “I’ve come to learn that it’s about the people you share these experiences with. For me it’s been generational.” While in his youth, he hunted whatever game was in season, Muche eventually honed in to focus solely on duck hunting. 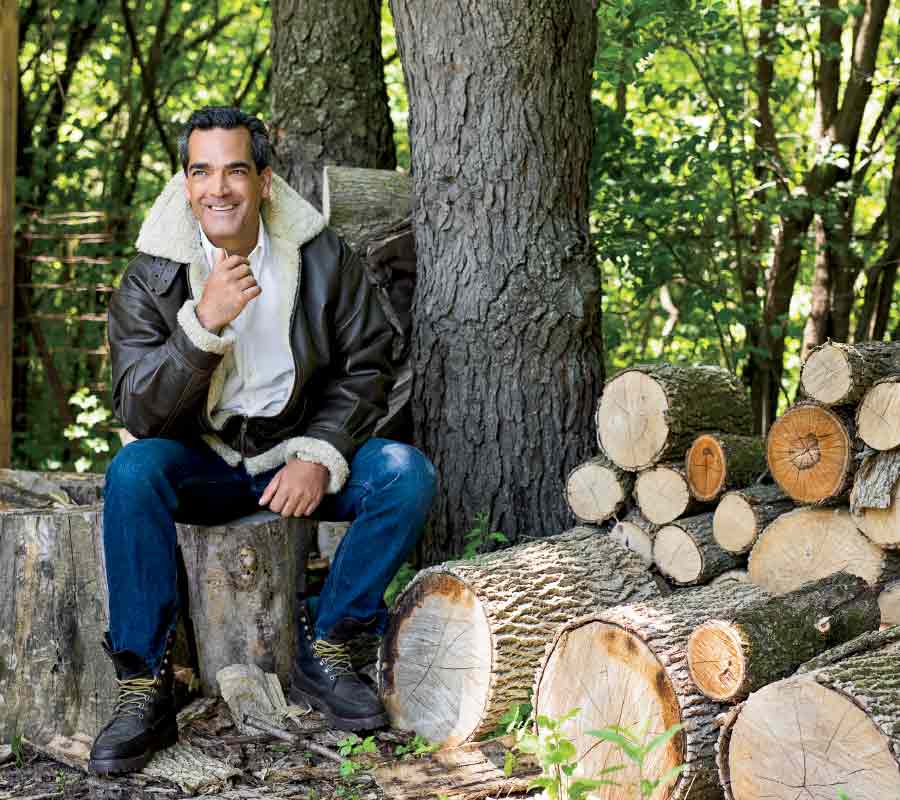 “Duck hunting is a pastime that can engage and endear multiple generations to the outdoors,” he says. “It is an activity unlike any other which intertwines one with nature, wildlife, and a closeness to the autumn passage of migration.”

Muche explains that the hunting experience and spending time outdoors in natural areas gives one a personal connection to the outdoors. “With that familiarity comes awareness and a bond of responsibility,” he says. “When taking a bird or animal, there is a connection and responsibility to that animal that makes your use of the meat more meaningful. I want to prepare it the best I can in respect to the life of the animal; and I enjoy sharing a wild game dinner with others to bring the experience full circle.”

Muche also comments that this honest connection to where your food comes from is lost in the processed, packaged meat we purchase on Styrofoam trays at the grocery store. “It’s good to be mindful that your dinner once flew or ran across the landscape,” he adds.

While it may at first seem a contradiction to support both the hunting and the conservation of the very species being hunted, Muche explains that one cannot exist without the other. “Sporting lifestyles are vital to sustaining North America’s model of conservation,” he says during our photo shoot on his Barrington Hills property, where he lives with his partner Katie Rose, who teaches riding at Oakwood Farm.

“The first hunting season restrictions and daily harvest limits in the United States were self-restricted, self-imposed limits set by hunters. The resulting formation of uniform state and federal regulations was led by the initiative of hunters,” says Muche. “In fact, it was in 1934 that the hunters themselves, who wanted to do something more to protect waterfowl populations and help create more habitat, whose leadership resulted in the enactment of the first Federal Duck Stamp.” 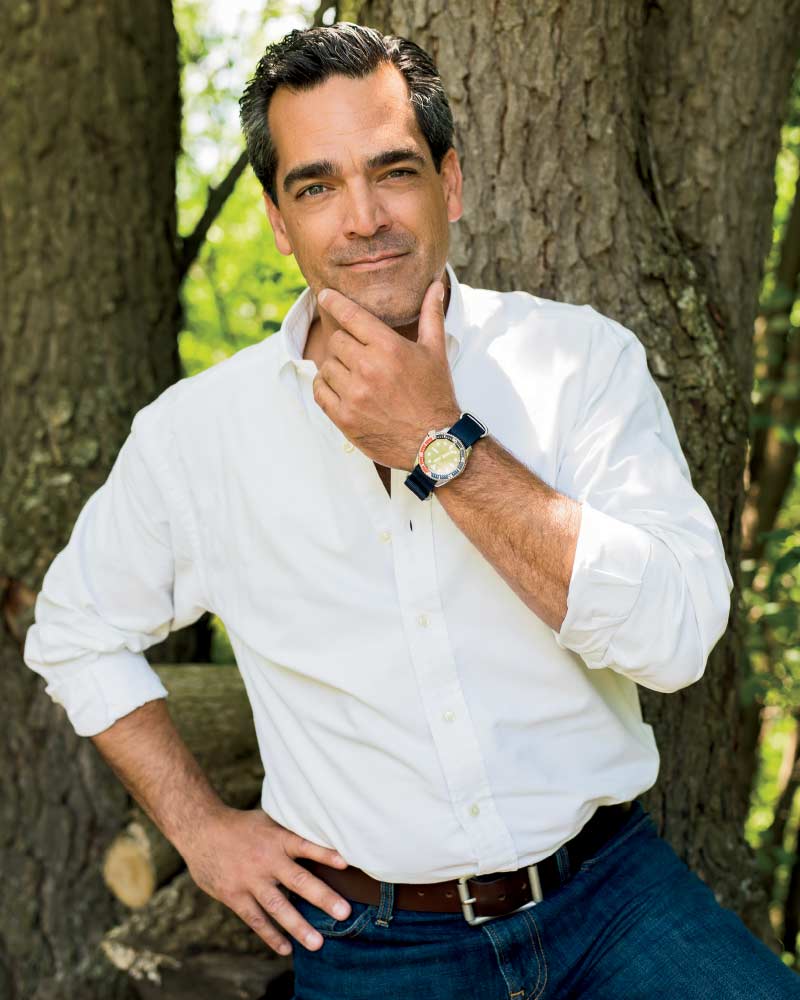 It’s this yin and yang that Muche wants people to understand—where seemingly opposing forces are actually complementary. Without one, you cannot have the other, and the whole is greater than the individual parts. That’s why conservation is vital.

Muche is a national sales and marketing manager for various consumer package goods companies (his “day job”). But in his “spare” time, he is devoted to hunting and the conservation efforts he tirelessly supports.

“In my opinion, the sportsman at his or her core is a true champion and protector of wildlife—in time, effort, and financial commitment” he says.

Spend an afternoon with Muche and it is evident that he is at one with nature as he strolls his country estate, with retriever dog Dutch at his heels. It’s clear that he is in his element as he educates us about the wood duck boxes along the pond adjacent to his property.

“Wood ducks are cavity nesters,” explains Muche. “By placing nesting boxes out there, you are reducing the chances of predation and increasing that duck’s chances for nesting success.” He encourages more people, who live near water, to help protect a nesting duck this spring by purchasing, building, and installing wood duck nesting boxes.

Also, as part in his conservation efforts, Muche is the founder and curator of Seasons 2 Remember, an online resource dedicated to creating a greater understanding and value for the outdoor sporting lifestyle. This includes collecting and sharing the cultural heritage of the American sportsman through stories of people, places, tradition, and adventure.

He also took up the baton of Thirsty the Duck last year. Thirsty is a drake mallard first created in 1960 to be the “spokes”-animal for a fledgling national nonprofit conservation organization, Wetlands for Wildlife—that dissolved after six years. But Thirsty’s mission was important to Muche, so after a 50-year hiatus he resurrected Thirsty the Duck and designed a full-size mallard costume, complete with duck head and webbed feet. As Thirsty (now 6 feet 1 inch tall and 200 pounds), Muche has been known to disappear into the costume to make appearances at sporting shows and other events in order to raise awareness of the need for more funds to preserve and protect vital wetlands and wildlife.

Thirsty’s mission today is to increase habitat management funding by increasing the number of waterfowl stamps sold via an increase in price of the Wisconsin Waterfowl Hunting Stamp. The price of the stamp, required of Wisconsin waterfowl hunters, has remained at $7 since 1997 (more than two decades). What many people don’t know is that 100 percent of funds raised through sales of the stamp go toward protecting, improving, and managing wetland habitats, with one-third going to natural breeding areas in Canada. While primarily only hunters purchase the stamp, anyone can support habitat management by buying a stamp.

“While federal ducks stamp dollars are used to purchase wetlands, both stamp programs benefit wildlife and protect habitat and natural resources that exist for the enjoyment of everyone, whether you are a hunter or not,” he says. Muche encourages everyone (even non-hunters) to purchase waterfowl duck stamps (here in Illinois, as well) to support these conservation efforts.

Also, to this end, the U.S. Fish and Wildlife Service conducts annual duck population surveys to measure the health of waterfowl populations on a continental scope. Survey data is used to determine hunting season length and to set limits on how many ducks one can shoot each day during hunting season, which is typically 60 days per year in October and November.

With such a full plate, Muche still finds as much time as possible to be outdoors and to hunt. He relishes the times he can get away to hunt in the Barrington area, at Horicon Marsh in Wisconsin, and for the past few years, up at the Delta Marsh, at the south end of Lake Manitoba in Canada. Hunts that he has hosted on Horicon and Delta have raised more than $50,000 for nonprofit organizations that promote public understanding, appreciation, and a sense of stewardship for the outdoors.

He explains that marshes are very important staging areas for waterfowl migration. But the great marshes are also areas where some species meet their mates. And the grasslands around these wetlands are places were nesting often occurs. Most ducks nest and breed in the prairie grasslands of the Dakota’s and Canada.

Muche says one reason he loves hunting historic areas like Horicon and Delta is their connections to the past. It is perhaps a self-perceived significance of joining along in the footsteps of past hunting pursuits that took place a hundred, or even a thousand, years ago. Places where the likes of royalty such as King Edward V (in 1901); celebrities including Ernest Hemingway, Clark Gable, Roy Rogers, Gary Cooper, and more recently,
Tom Selleck; and athletes like Babe Ruth and others, have ventured to hunt.

“Areas like the Delta Marsh are conduits tying us to the past and a rich legacy,” Muche says. “Experiencing a lot of the same things they did adds to the experience.

“And, there is something mystical about being out on the water, with decoys floating and bobbing, and the magical visitation of ducks coming down to decoy. You never know what you are going to see or what wildlife might appear; it’s never the same and it never disappoints.”

Out on the water in his vintage duck skiff, you’ll see Muche wearing old gear like duck canvas that he has carefully preserved. “Much of the clothing and gear I use is over 50 years old and lasting and performing well through a second or third generation of use.

“Maybe just wearing the old hunting coat and being surrounded by the old gear,” he muses, “with its worn canvas that holds so many stories … brings me a little closer to those memories afield where I once followed the fine gentlemen (now long gone) that mentored me in this outdoor lifestyle of a sportsman.”

But, while time may have changed the clothing and watercraft used by hunters into the chase of fall migration, Muche says that the heart and soul of the duck hunter from the late 1800s through today is very much the same.

“What is very important to me is ‘The How’ when hunting, to enter into the journey of pursuit in a way that honors the hunting tradition, a way that is respectful of wildlife and wild places, and in the conduct that exemplifies all that is good and pure in hunting,” he sums. “It’s on my watch now. And, I’m honored to carry the torch passed to me.”