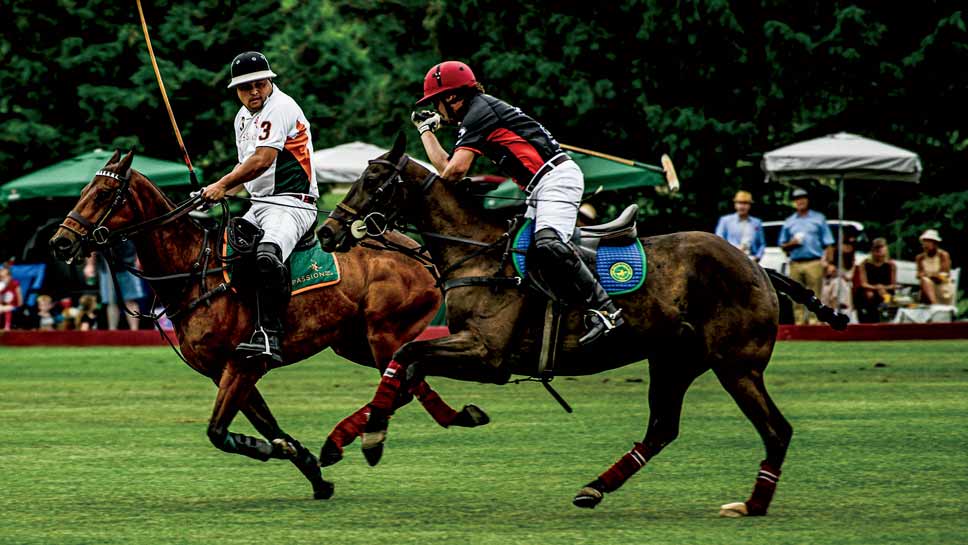 The logo at Barrington Hills Polo club is that it’s a sport to be enjoyed “among friends.” However, once that passion is ignited, as it was with our hometown Passion for Polo team, it can take you all over the Chicago area—and the world.

In Barrington Hills, polo is personal (and often, very private). This is horse country, after all. With our rolling fields and world class equestrian facilities comes a natural obsession with what may be one of the oldest sports in the world.

Scholars believe polo originated in China or Persia more than 2,000 years ago and was originally used for training cavalry. History’s first recorded polo match was played between the Turkomans and the Persians (the Turkomans won), and the game was also played from Constantinople to Ja- pan in the Middle Ages.

The largest polo club in the Central Circuit of the United States Polo Association (USPA) hap- pens to be in our backyard. Barrington Hills Polo Club boasts three grass polo fields in Barrington Hills and operates an arena facility in nearby Wauconda with a regulation, lighted outdoor arena plus a smaller indoor arena for winter play.

While neighboring organizations such as Oak Brook Polo Club are devoted to international competitions during the height of the summer season, the 49-year-old Barrington Hills Polo Club offers year-round polo and Chicago’s only nationally recognized polo school. It’s famously dedicated to polo that is accessible, af- fordable, and fun for people who love horses, good times, and each other’s company.

However, sometimes, seasoned polo players want to take the show on the road—or even across the pond. One such local team is Passion for Polo.
The story is one that lives up to his name. Barrington Hills residents (and native Germans) Frauke and Jan-Dirk Leuders recruited 5-goal polo player Anthony Garcia four years ago to teach them the game they were passionate to learn. As Garcia explains, they had never played before but took the steps to modify a tennis court to build a small polo ring on their Barrington Hills property.

Garcia personally trained them (morning and evening, six days per week) and today, the Leuders not only have 42 polo ponies on their property but Passion for Polo has become an international team—competing in Oak Brook as well as Asia, England, and Argentina.

“Passion for Polo has one of the nicest, privately owned, world-class, all weather, indoor-outdoor facilities in Midwest … maybe even in all of North America … and one the best horse collections,” says Garcia, explaining that part of the club’s mission is to teach polo to youth who would not other- wise have the opportunity—including the nonprofit polo edu- cation foundation he created in his native Philippines.

While there is some quiet rivalry with neighboring polo communities, Garcia says being able to play at Oak Brook Polo Club—where Barrington Hills resident Jim Drury leads a team of Argentinian superstars—is a positive thing.

“Oak Brook Polo has helped open a camaraderie among the different polo organizations in Illinois,” says Garcia. “It opened the opportunity for Passion for Polo to join that level of tournament, and it has been a privilege to play in a historic club.”

And historic, it is.

Those who follow the larger U.S. polo scene know the tale of how local businessman Paul Butler founded what would become Oak Brook Polo Club in 1922. Sweeping into the Chicago area at the height of the giddy roaring ’20s, it was a spectacle indeed.

Now regarded as one of the oldest polo clubs in the Unit- ed States, Oak Brook Polo Club’s grounds in Oak Brook served as home to the U.S. Open Polo Championship for 24 straight seasons and other prestigious international and national polo tournaments. For generations, it’s been a popular Sunday tradition and social scene known for entertaining Hollywood celebrities, dignitaries, royalty, and the most distinguished Chicago residents. And thanks to the efforts of local players like Drury, it’s going strong into the 21st century.

The Oak Brook Polo Club plays every summer on the Prince of Wales Field, which is adjacent to the Butler National Golf Course and The Drake Hotel in Oak Brook. Regal Sun-
day polo matches continue to attract thousands of spectators who marvel at the athleticism and majesty of this timeless sport.

“Oak Brook Polo is the birthplace of polo in the Midwest,” says Drury, who serves as captain of the Oak Brook Polo team with Marianno Gutierrez, Tomas Obregon, and Horatio Onetto. “Everything that happens throughout this region, including Barrington, is the result of polo existing in Chicago.”

What’s even more impressive is
the history of the sport found its way from Asia to Europe and today, North America.

Research provided by Oak Brook Polo Club Managing Director Danny O’Leary shows that the modern age of polo began when the British dis- covered the game in Manipur on the border of India and Burma, founding the world’s first polo club at Silchar. Many other clubs followed and, today, the Calcutta Club, which was founded in 1862, is the world’s oldest. Today, the oldest clubs outside of India include The Malta Polo Club, the All Ireland Polo Club in Dublin, England’s Monmouthshire Polo Club,and the Meadowbrook Polo Club on Long Island in New York.

From there, the sport headed south to Argentina and around the globe to Australia, making polo the international sport that it is today.

While the 2019 season is well underway at Oak Brook, there are still five big matches coming up— including the Butler Invitational Cup game against Wales on September 8, which is sponsored by Country magazine and JWC Media.

“We’re looking forward to a very exciting season and putting on a show,” adds Drury, who says that at the end of the day, polo is about bringing people together for one of the most amazing parties they’ve ever attended.

Garcia may be there, but not to play. His Passion for Polo solidly defeated Oak Brook Polo Club on June 9. An extra round of champagne may be in order. 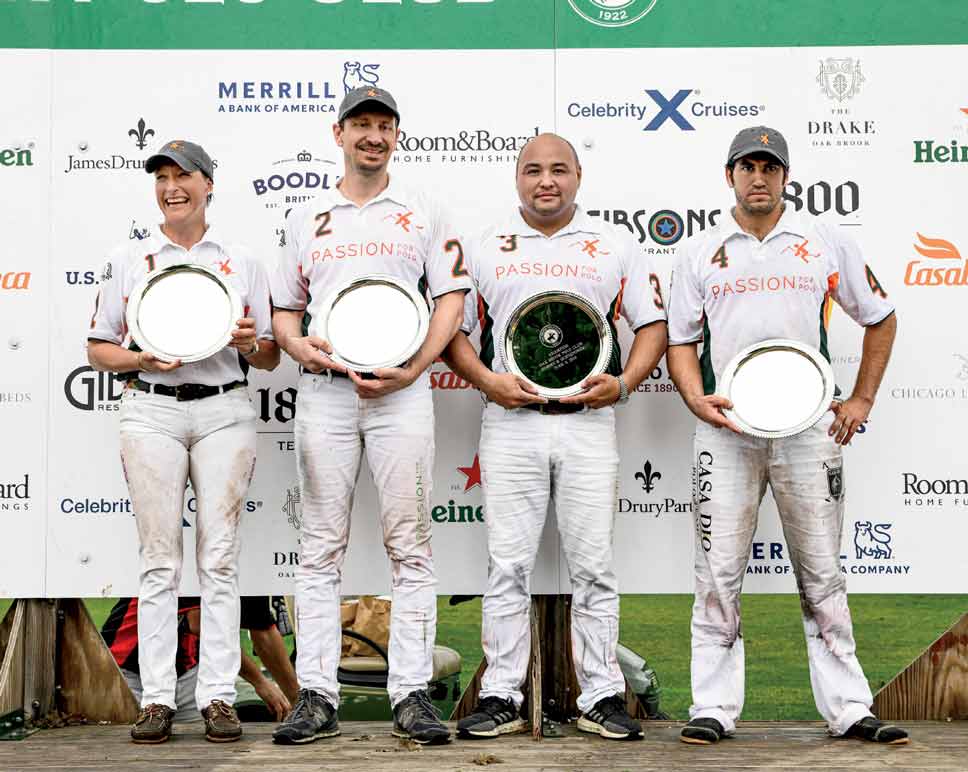 The Passion for Polo team 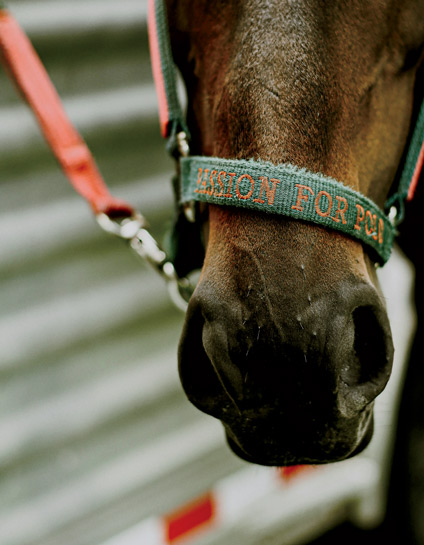