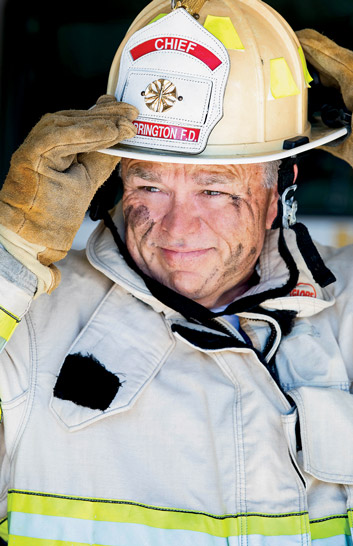 Chief Jim Arie knew he wanted to be a firefighter by the time he was in 8th grade, and he has never wavered in his dedication to that goal. He started his career at age 21 by filling a firefighter vacancy position in Champaign-Urbana, then went on to work in several fire departments around Illinois before coming to Barrington. He also taught for the Illinois Fire Service Institute for more than 25 years. Now, as he looks to retirement on the horizon, he reflects on a career that has culminated in his position for the past 16 years as Fire Chief for Barrington, the village he also calls home.Arie credits “hard work, dedication, perseverance, and never giving up” to accomplishing his goals. He also pays homage to the many “role models”—leaders in fire service he has had the privilege of working with, “who have demonstrated that being a Fire Chief is a position of great responsibility, a position of being a cheerleader, coach, and protector for the amazing firefighter/paramedics.” As Fire Chief, Arie wears many hats, as ambassador for public safety and advocate for public education, fire prevention, the best use of tax dollars, and working closely with neighboring fire departments, “who all share a genuine interest in providing the best possible service to our citizens.” He also serves as the village’s Emergency Management Coordinator, a seemingly impossible job of planning for any conceivable emergency situation.In his spare time, he donates blood in the apheresis program regularly, has been a member of the Barrington Noon Rotary since 2008, and plays golf at nearby Stonehenge Golf Club. He also tries to visit his son, Jim Arie—who currently serves as a Specialist in the U.S. Army, stationed at Fort Carson in Colorado Springs—as often as he can, and of whom he is very proud. Seems like serving the greater good runs in the family.“I have a great job and I get to work with wonderful people in an awesome community. Being the Barrington Fire Chief is a privilege, an honor, and a blessing.”

SEEING MY SON GET MARRIED “I got to go visit my son for Father’s Day recently, and it was the best dad’s day ever.”

RETIRING ON AUGUST 2, 2020 “I’ll eat at the Bread Basket or Egg Harbor or Chessie’s and play some golf.”

MAKING A HOLE IN ONE “Golf is one of my passions. It fills my humility bucket!”