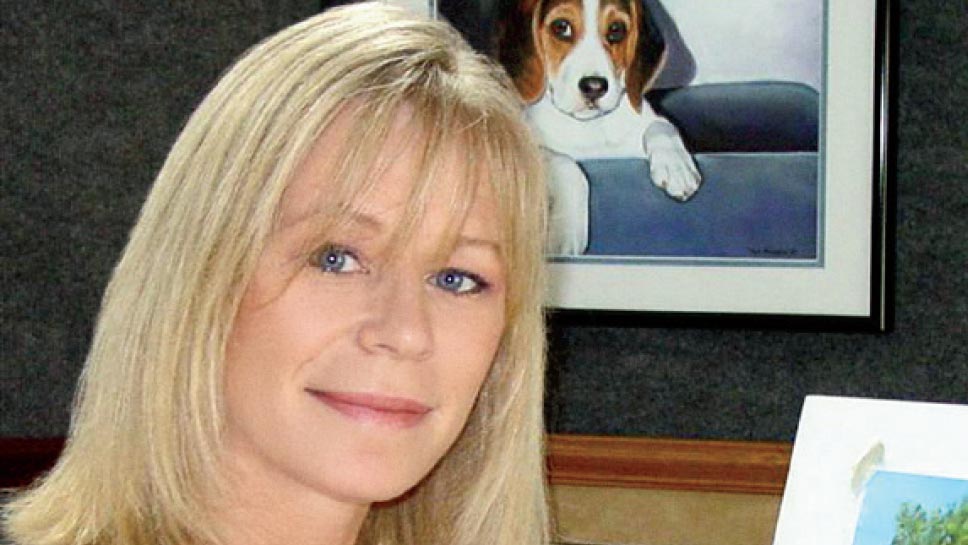 Barb Benstein shares her love of art, family, and a life well lived.

Barb Benstein’s life trajectory started to take shape early—when she was about 3 years old and fell in love with horses. Little did she know then that, years later, horses would become a favorite subject to sketch and paint.

Her current horse series focuses on cropped, detailed images of horses: “You can see the veins, the soft fur, the expressive eyes, and eyelashes,” Benstein says. That’s because she has learned to paint them in intricate detail.

She started sketching horses at a young age, learned to ride, and eventually bought her own filly, named Misty Heather, from the barn where she rode. Benstein was 17, and her mother said yes to the horse, but only if she could pay for her own board. So she got a job as a cashier at Burger King, finished high school, and went on to secretarial school at College of Lake County. “I didn’t think you could do art work for a living,” she says. It would take a while, but she would someday become a working artist. 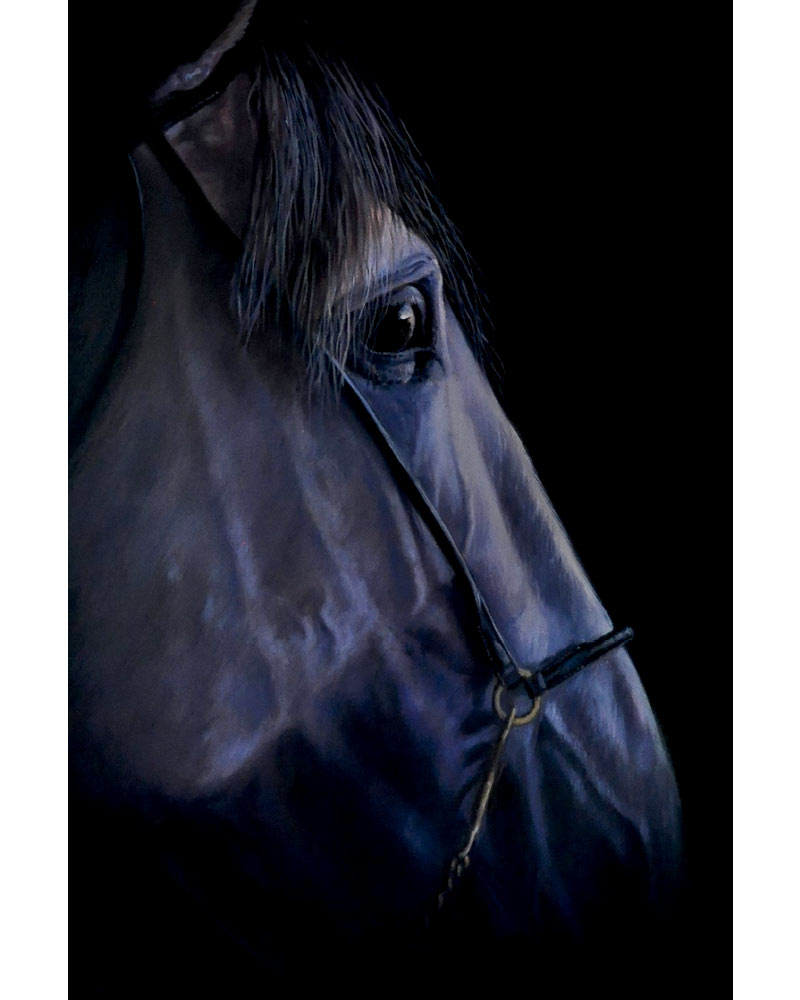 While growing up in Ingelside, Illinois, Benstein showed an interest and talent in art. “My mom says I was born with a crayon in my hand,” she says.

“From Kindergarten on, people saw I had talent,” Benstein says. “In Kindergarten, the parents were invited to see the Abraham Lincoln drawings we all did hanging in the classroom. My mom told me that she knew right away which Abe was mine, as I had done so much detail compared to the other kids’ stick figures.”

“Then, my 6th grade art teacher, Mrs. Kinirsh, taught me how to draw people,” she says.

While a student at Grant High School, Benstein took every art class offered until she literally ran out of classes to take. But, her art teacher, Dan Rendl, gave her more difficult projects to challenge her to expand her skills. She won the Art Award her senior year. “He taught me to draw what I see. It was really nice how teachers worked with me throughout my school years. They made an impression on me.” 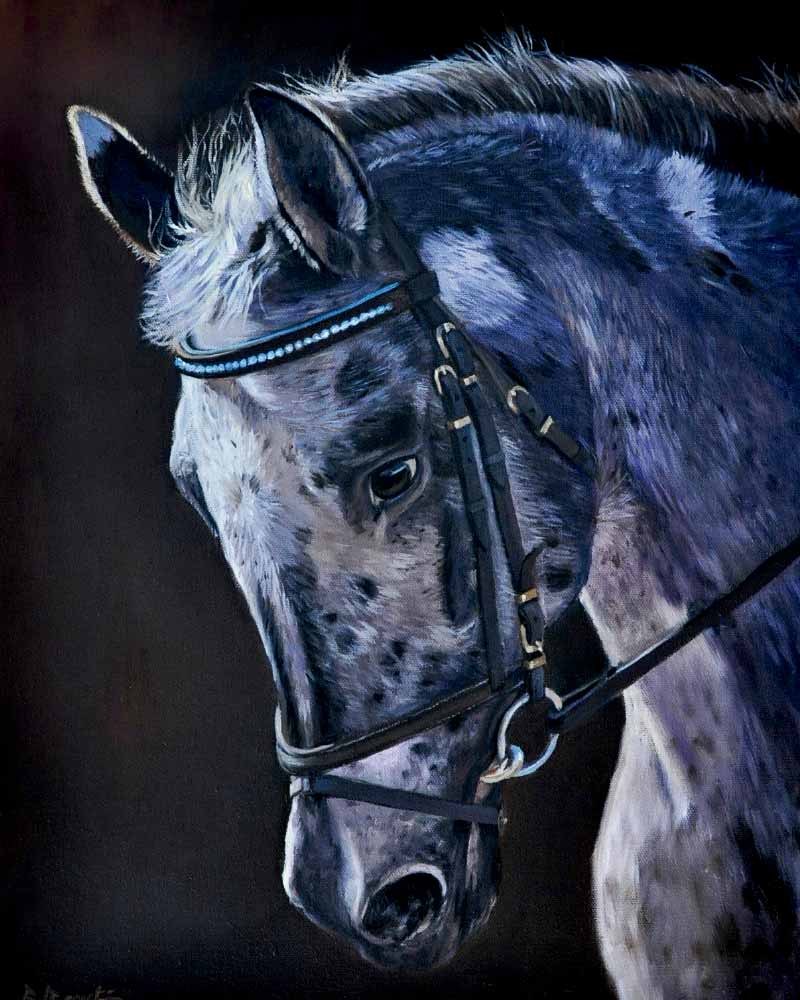 Benstein took that impression to heart, and much later, she was given the opportunity—by Frankie Johnson at Mainstreet Art—to teach art. Benstein said yes.

During those formative years, especially after she bought her own horse, Benstein often made sketches of Misty Heather when she wasn’t riding her.

“We did some horse shows for a while, but we both got bored going around in circles,” she laughs. “I’d sit outside while my horse was eating and I’d sketch. Oh, the adventures we had!” Benstein often took Misty Heather up to Wisconsin to ride, and even traveled with her to the Ozarks for a week, riding 100 miles.

“I believe a lot of my knowledge of horses came from many sketching and paintings I did of Misty Heather,” Benstein says of the beloved filly she owned and rode for nearly 30 years. 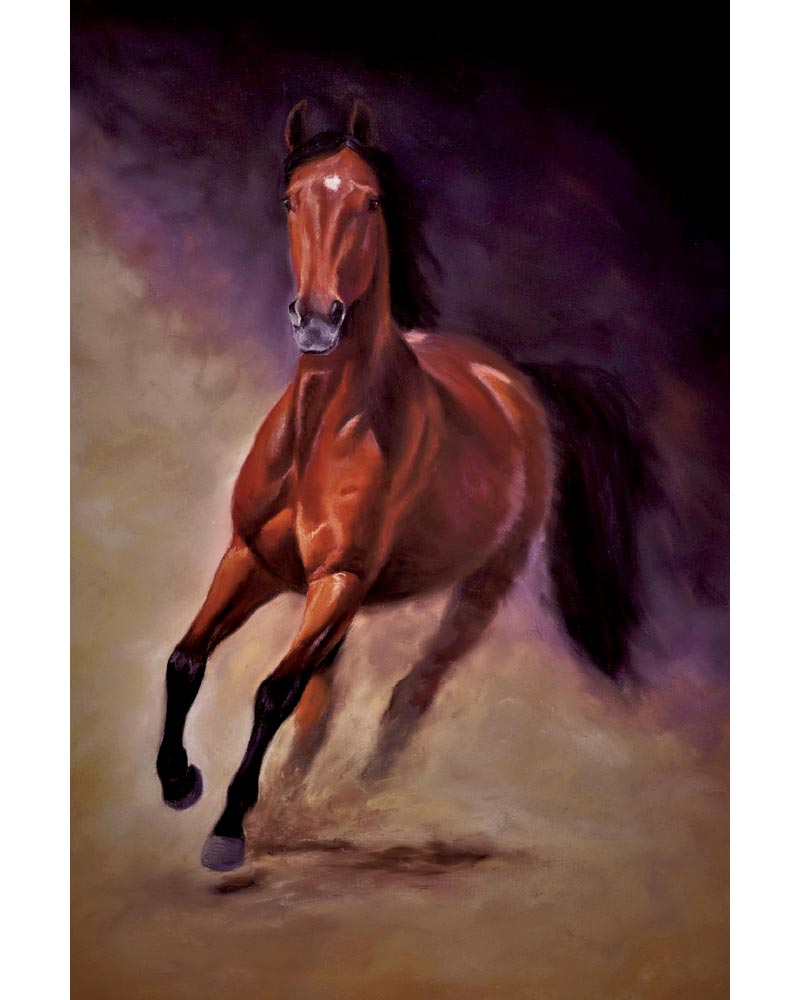 Along the way, Benstein met husband Michael, married, moved to Lake Zurich, and had their two daughters. Her secretarial jobs eventually led her to work as a graphic artist for 10 years before deciding to make art her full-time occupation in 1994. That’s around the same time that she started going to art shows.

At Ela Fesitval of Arts, she met both Barb Evans, who had started a co-op gallery called Arts in Action, and Frankie Johnson. “We had our art displayed, and from the connections I made at that show and others, I got repeat and referral business,” Benstein says.

Later, in 2008, Johnson asked Benstein if she would like to be an art instructor for 6 to 8-year olds. She grew into teaching older kids and then adults, while learning to paint in oil from Johnson. “I really took off from there and started doing workshops on specific techniques like how to paint details on animals and how to crop.” 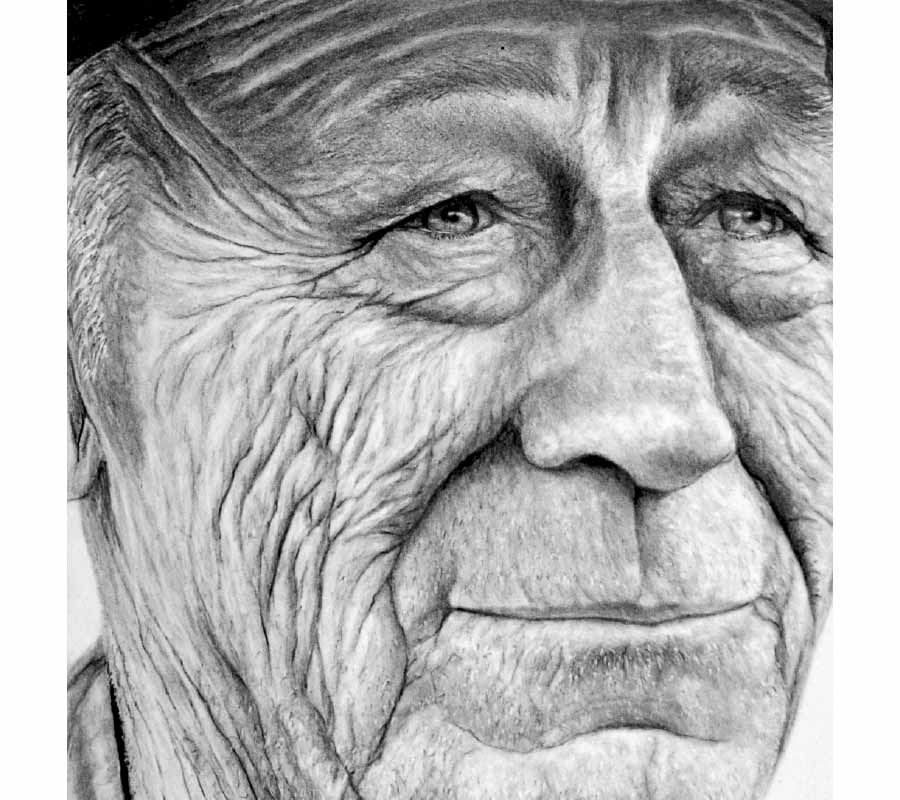 Benstein has done art demos at Lake County Art League and other area art guilds. She also offers painting parties at the library or at private homes. “I bring all the supplies, and people have a lot of fun.”

“This year marks my 25th year doing artwork full-time, specializing in people and pet portraits, as well as homes and landscapes in oil or pastel,” says Benstein. “Painting with pastels has always been my favorite medium. I love the vibrancy of the colors and the richness of the texture when applied to sand paper.”

Benstein says she also loves working in oil, “for the smoother, softer texture it adds to my work.”

Still, graphite and pencil drawing was her first love, and she still creates in this medium using her own acquired technique. “I layer hard to very soft graphite to create a rich blending of values,” she says to describe her process. “I also use an electric eraser to ‘draw in’ highlights and other details.” 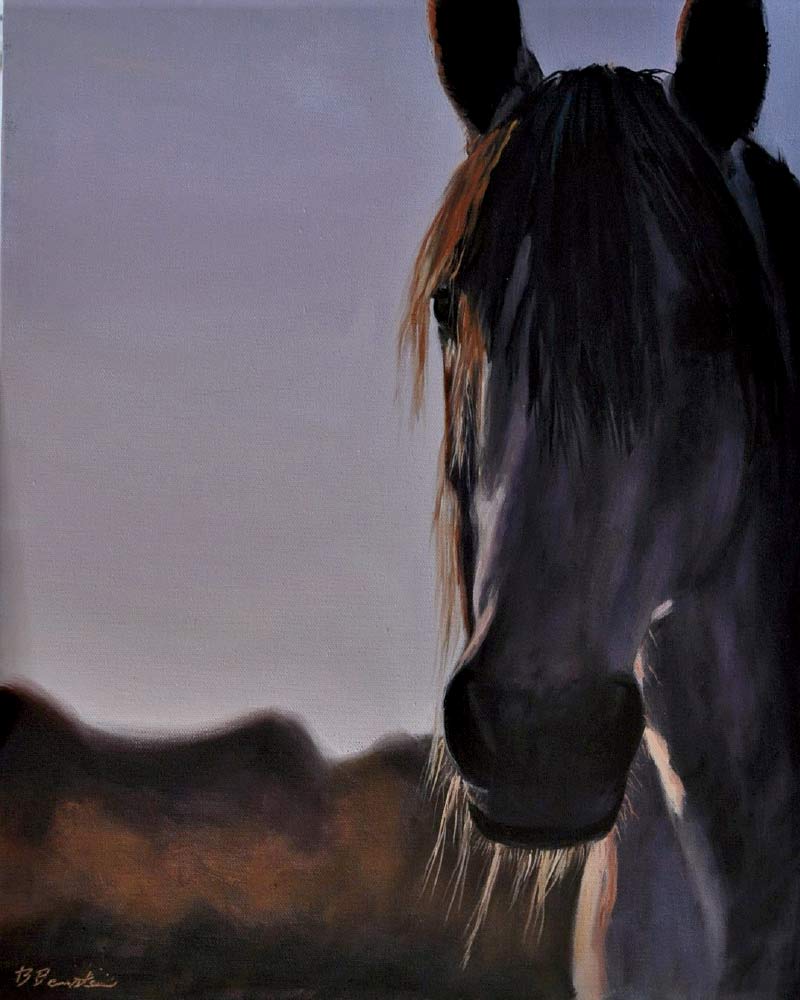 Now, much of Benstein’s work is commissioned. “I do commissions for anything a person wants,” she says. “You can paint anything once you learn to draw what you see, including people, homes, animals, boats, airplanes. Anything.”

“I like to do commission work when the painting has meaning to my client, such as a memorable vacation. It preserves the memories,” she explains. “Often, when clients see the painting, they’ll have tears in their eyes, especially if it is of a loved one who has passed or if there is some personal spiritual connections for them. I did one of my own dad for myself.”

Benstein often creates her paintings from photographs. “I’ll tell clients to take a picture at certain time of day, for example. My paintings are often better than a picture because I see more, and know more about complementary colors and creating atmosphere than a camera does.”

Her love of horses extends to her commitment to donate a portion of her equine art proceeds to local horse rescue, Hooved Animal Rescue & Protection Society (HARPS), based in Barrington Hills.

For Benstein, creating art is just one large part of the life she and her husband have made for themselves. “We are determined to live our lives to the best every day,” she says.

“When I’m not painting, which is pretty much every day, I’m riding horses, bicycling, reading, spending time with our children and grandchildren, or even going on a rag top ride with my husband,” she says. Michael surprised her with a red “growling” Mustang Convertible GT, complete with red leather interior, for a recent anniversary. They just celebrated 30 years of marriage last month.

“Many times we will pack an overnight bag and head out. We always use back roads and find these amazing Ma and Pa restaurants and meet some great people.” And while Misty Heather is no longer with her, Benstein has started going to a dude ranch called The BarW in Whitefish, Montana to spend a week riding all day every day.

“It doesn’t get any better than that,” she says. “While there, I’ve taken some beautiful photos of the area, which will eventually find their way as an oil or pastel painting; I’m even doing some for the lodge.”

She and Michael occasionally spend winters in Florida, where she does a lot of plein air painting. “Come summertime, our yard looks like a tropical paradise with flowers, bamboo, and a pool,” she says. They regularly walk to the lake to join friends for their “sunset club.” “I do a lot of paintings of the lake,” she says. “I’m working on my Sky Series.” She recently showed at the Barrington Art Festival and will be doing about 10 shows this summer.

“Being with family keeps me grounded … creating art makes me soar,” Benstein says.