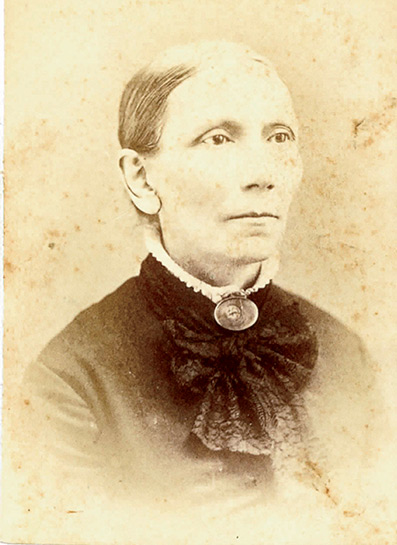 Elmina Caroline Phillips McIntosh has been found. At least her image has.

In it, her face is taut, tired, and her cheeks seem sunken. The image reflects a woman of advancing years. She is a frontier woman of Illinois. She is grim.

She has lived hard.

McIntosh helped carve a town out of the wilderness, and bore eight children, though only three lived to the advanced years she did. She was 84 in 1908 when she died.

But in truth, it’s not as if she has really been lost for 111 years, because no one was looking for her. She was missing, but not particularly lost.

That’s an indignity. She was an important personage who’s been snubbed by history. That’s the underlying story of Elmina Caroline Phillips McIntosh, and all the frontier women of Illinois. Vaultkeepers can make a good case that Elmina McIntosh was the very first “First Lady” of Barrington. She married fellow New Yorker Millius Benjamin “M.B.” McIntosh in 1846, and they hoofed it by Great Lakes ship to Chicago, and then to the barely nascent Barrington.

Hubby then became the first elected mayor of Barrington, the first head of public schools, the first financial bigwig with a lumberyard, and the first killer competitive croquet player.

By process of elimination, that makes Elmina Caroline Phillips McIntosh the “First Lady of Barrington.”

But what else was she? Therein lies the problem that various historical scholars have encountered when they attempted to profile the full role of Illinois’ frontier women. The historical cupboard is bare, almost as if the uniformly male historians who recorded 19th century events had decided women were irrelevant.

Indeed, that is the prevailing theory now.

Luckily for Barrington, the Vault is populated by inquisitive acquirers of antiquity. They look for the forgotten, but significant.

One of those acquisitive souls is Phyllis Brown who operates the Kentucky Kindred Genealogy Research Institute in Harrodsburg, Kentucky. She didn’t know Elmina McIntosh was famous when she stumbled over the rare photo. She found it accidentally last year just across the Ohio River in Cincinnati (at a sale of ancient items, knickknacks and bric-a-brac). As part of her self-appointed duties, Brown seeks out all old photos and saves them.

“One of the photographs we found while on our genealogy travels the end of March,” Brown says. “Don’t you love a photo that has, not only the name, but the maiden name, also. Elmina Caroline Phillips McIntosh—what a grand name, and with Elmina as a first name, not that ordinary! I put a search in ancestry.com and what did I find? Elmina, living in Barrington, Illinois, just as listed on the back of the photo.”

But there are no celebrations to honor her, or even any acknowledgement that she built old Barrington just as surely as “M.B.” did.

As Adade Mitchell Wheeler found in 1977 when she researched and wrote The roads they made: Women in Illinois History, frontier women in Illinois toiled in permanent obscurity.

“Women are treated as abstractions or symbols. Their real accomplishments are rarely recorded,” Wheeler wrote, and she looked everywhere for those records. “History books mention women so seldom that they seem to fade into the woodwork of the home. A woman is mentioned in her relationship to men and through the eyes of men. Her birth is recorded, if her father was prominent, or her marriage, if to an important man. At death, a minister will elaborate on what she meant to her family, especially if she was a ‘good mother’ or ‘gracious hostess.’ Women have been relegated to a subservient, secondary role, which in men’s estimation is not the stuff of which history is made.”

In this telling, Lines does not seem even to acknowledge there was someone else in the room when “he” had nine daughters. When he mentioned his grandmother in the historical profle, Lines called her only “Mrs. McIntosh.”

As Brown has found, Elmina was born March 16, 1824, to Reuel Phillips, Jr., and Sarah Landers. Reuel was from Connecticut, and Sarah from New York. In the 1850 Census, they are listed in Guilderland, Albany County, New York, but in the 1870 Census they are in Barrington, Cook County, Illinois, where they remained until their deaths.

When Brown found the image and posted it on website, a Washington State relative of Elmina Phillips asked if she could have it, as a family treasure. Of course, Brown consented.

So now the photo is lost again, at least to the people of Barrington. But at last, Elmina Caroline Phillips McIntosh has been somewhat memorialized here in our Vault.