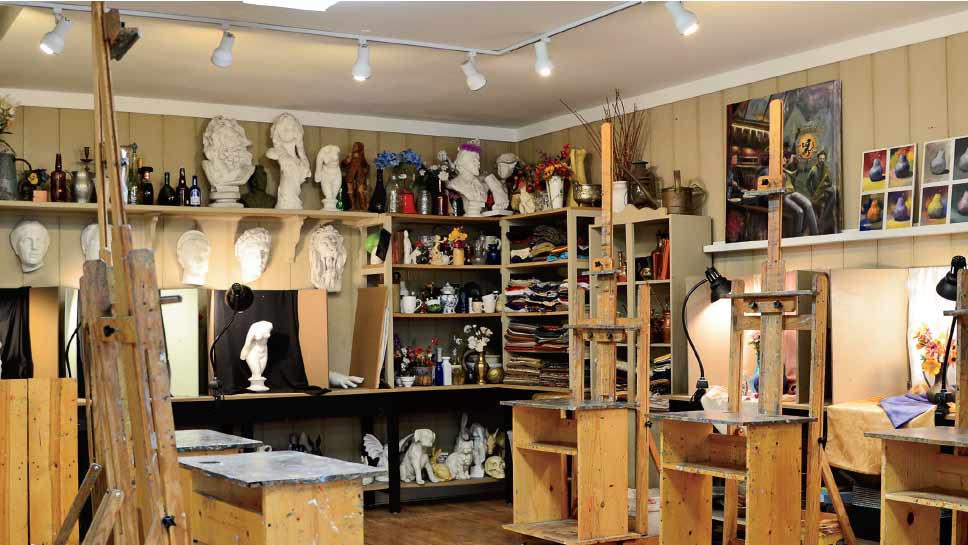 As one of nine siblings growing up in a busy family home in downstate Mattoon, Illinois, Frankie Johnson didn’t get much time to herself—until she found art.

“Mom always saved a corner for me somewhere to draw and put my pictures up,” says Johnson from her home in Lake Zurich. “I’ve been drawing since I was a very little girl, sitting at a chalk board and drawing cartoon characters from coloring books.”

When Johnson’s grandmother paid for her to have private painting classes when she was 10 years old, it cemented her passion for art—for life.

Johnson couldn’t have imagined then that she would someday open her own successful art studio—Mainstreet Art Center in downtown Lake Zurich—that celebrated its 25-year anniversary last month.

There would be other pivotal events and influential mentors along the way to lead Johnson on her artistic journey. After that first summer class, her teacher took Johnson to her first art show in Paris, Illinois, where she had her portrait painted by an artist at the fair. 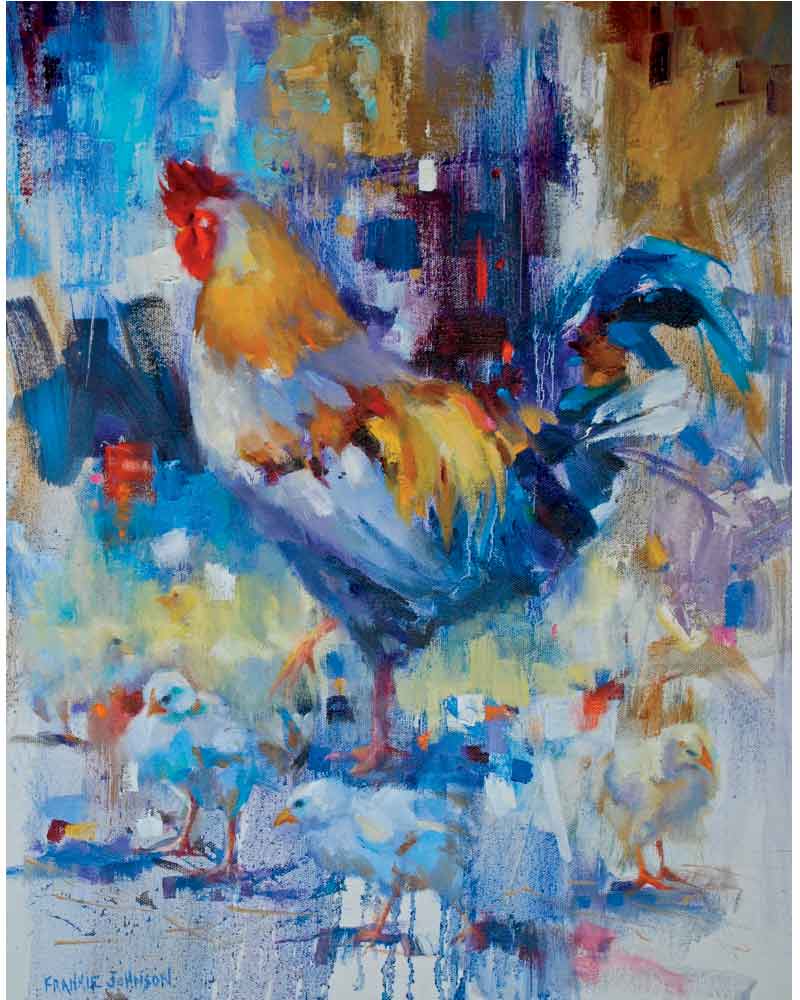 “I’ve never stopped painting since those classes,” she says. “Everything about that experience was so special to me. In our large family, we never had one-on-one attention, so to go alone with my teacher to an art show so far away for the whole day was very special.”

In high school, Johnson took art classes every year, and moved out on her own after graduation. She got a job, started working, and still painted in the evenings.

“A friend of mine kept telling me to go take classes at this place in Wauconda,” she recalls. “I called the school and the teacher told me to bring some paintings out so she assess my ability.” 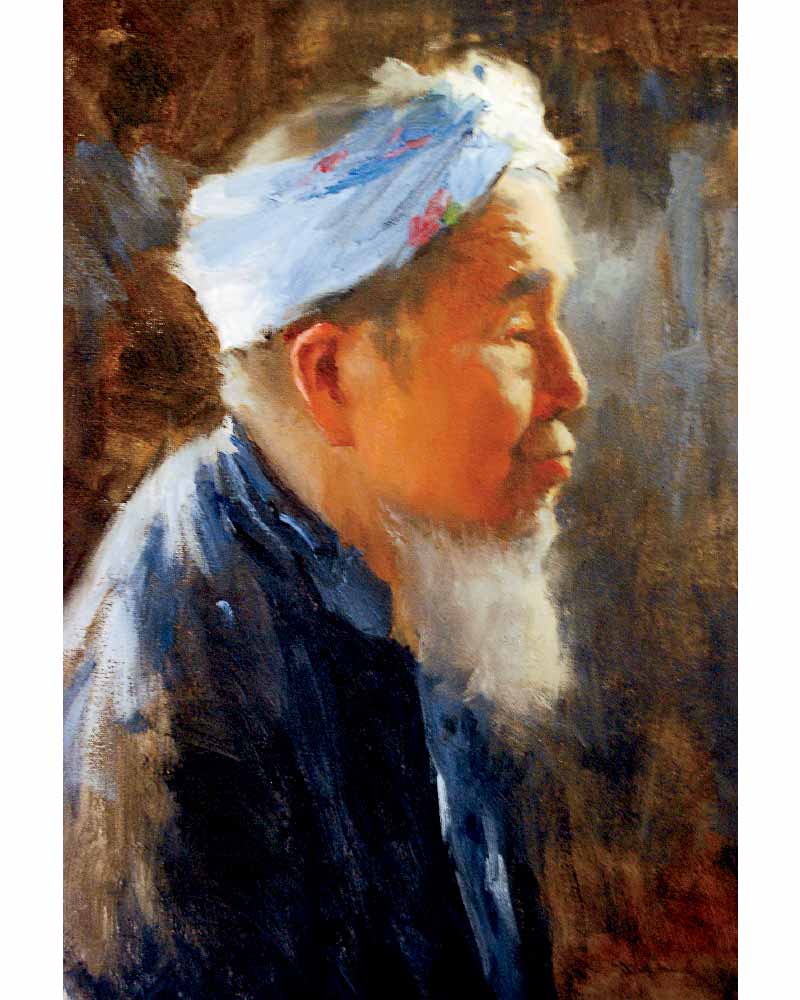 That teacher was Bonnie Anderson of Studio in the Woods, and she would shape Johnson’s art and future.

“Bonnie told me I had good understanding of mixing colors and values. But I was a very tight, detailed artist then. I’d paint every crack in the street, and the journey was not really fun,” she laughs by way of example. Bonnie told me that she could teach me how to have more fun painting.”

Anderson took Johnson under her wing. “She gave me all types of opportunities I would not have had without her guidance and support and help,” she says. “I took workshops with well-known artists around the country, normally for a discounted price. She opened up so many doors. She guided and educated me.” 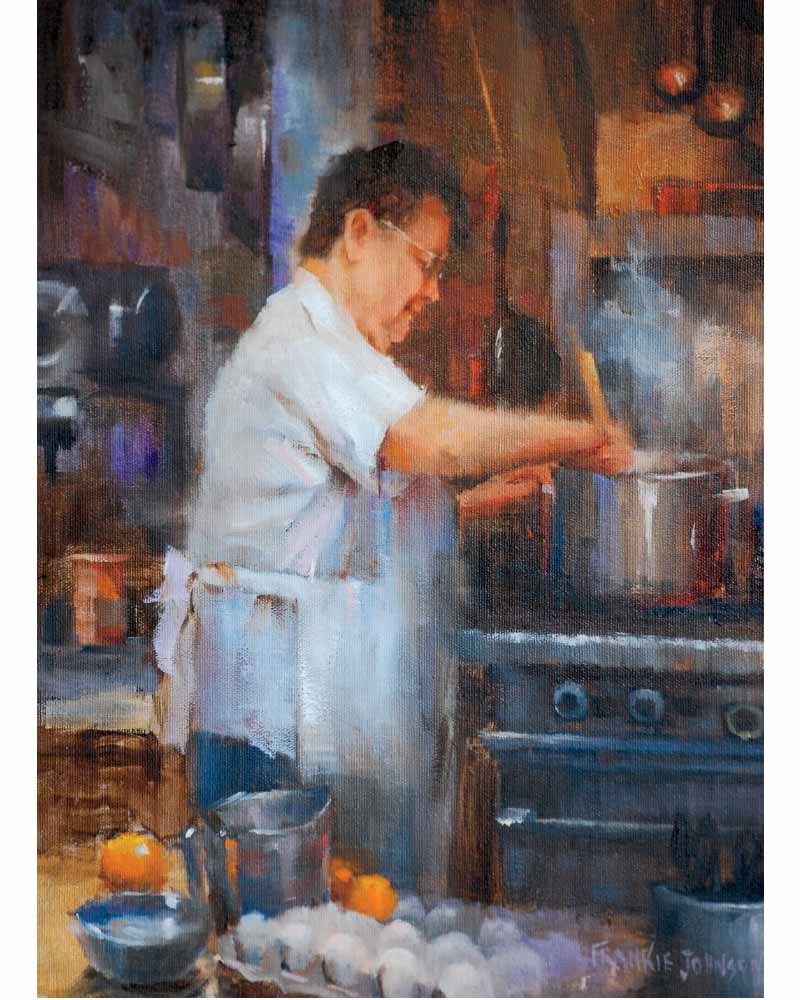 After high school she worked in a few jobs from the post office to graphic design positions at area companies. Johnson was in her early 20s and married to husband Jay when she found Studio in the Woods, where her art training took place, all before her three sons were born.

“After working with Bonnie for two years she asked me if I’d be interested to train, to become one of her teachers,” says Johnson, who trained for a couple more years in the classroom and eventually joined Anderson’s staff as a teacher. But Johnson credits Anderson for giving her much more than art skills.

“She taught me how to speak and do demonstrations in front of various groups, such as art guilds or women’s groups,” explains Johnson, who was understandably nervous in those early days. “She’d say to me, ‘I told them you’d be there, and you can do this.’” 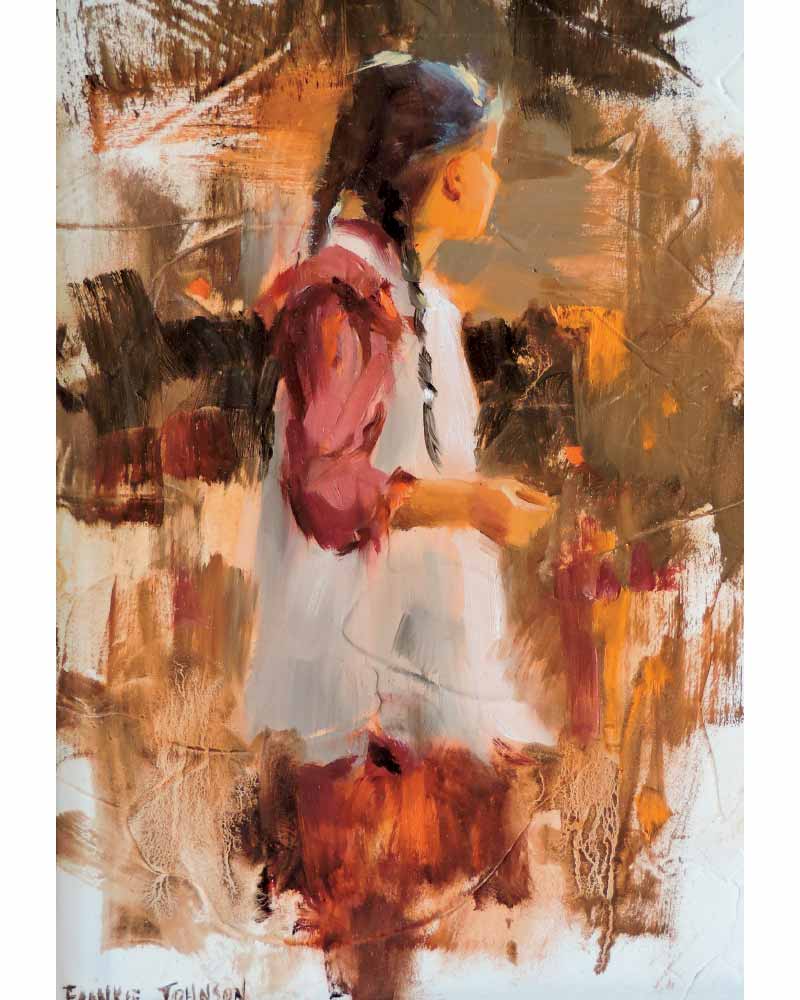 Anderson would watch from the back of the room, sending silent confidence Johnson’s way as she learned confidence in herself.

That confidence would be instrumental a few years later after Anderson sold her studio and a new owner took over. He then moved the studio to Long Grove, where the teachers and student body moved as well.

“A fellow teacher and I were afraid the new owner was going to close the school after a few years. He was more interested in running a gallery, that made more money for him,” recalls Johnson. “So we found this place in Lake Zurich and opened Mainstreet Art Center on April 1, 1994. We were partners for the first ten years together.” 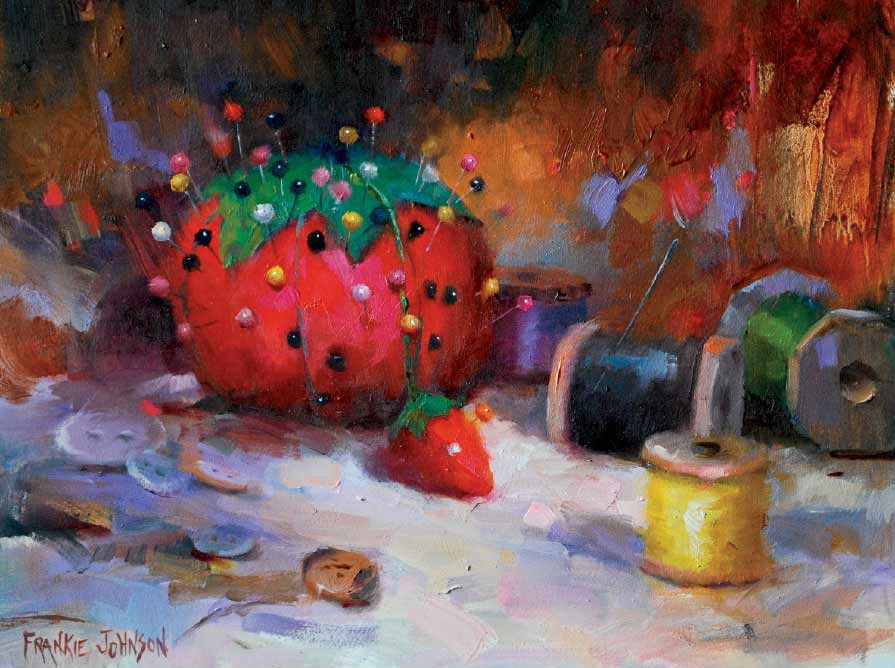 Johnson says that, to this day, she runs the school exactly the way Anderson did—offering classical art training to people of all ages.

“New students all start out doing charcoal, learning the fundamentals of drawing, before going into painting,” says Johnson. “It’s very important. Then they go on to painting exercises and color theory.”

Johnson imparts this same philosophy to every teacher before they are invited to work at Main Street Art. “Every teacher goes through the same training process so we all teach the same beginning skills and lessons,” she explains. 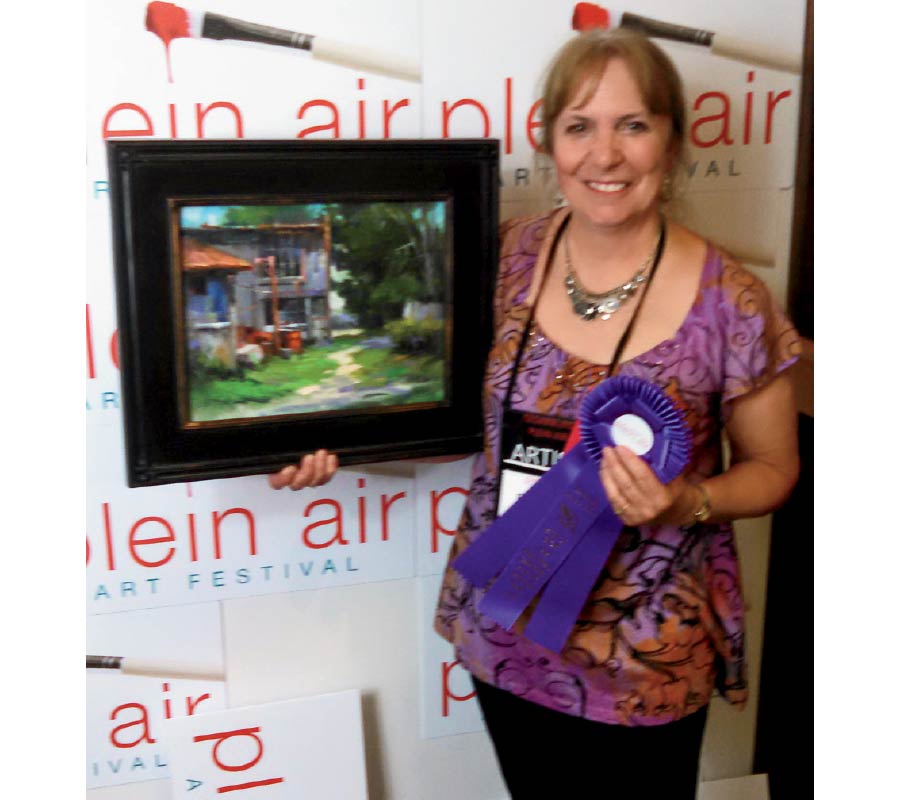 Many of the teachers (there are currently nine) and staff come up through the studio as students, according to Johnson. “I’m always looking at the skills and talent of the student body, and when I see potential, I may ask a student if they’d be interested to train as one of our teachers or office staff.”

Also like Anderson, Johnson offers workshops with visiting artists from around the world. “We cover all mediums and subject matter: oils, watercolor, pastels, portraits, still life, and plein air. The process of securing these artists to come in for a workshop can take up to two years.

Some notable artists who have visited Main Street include: 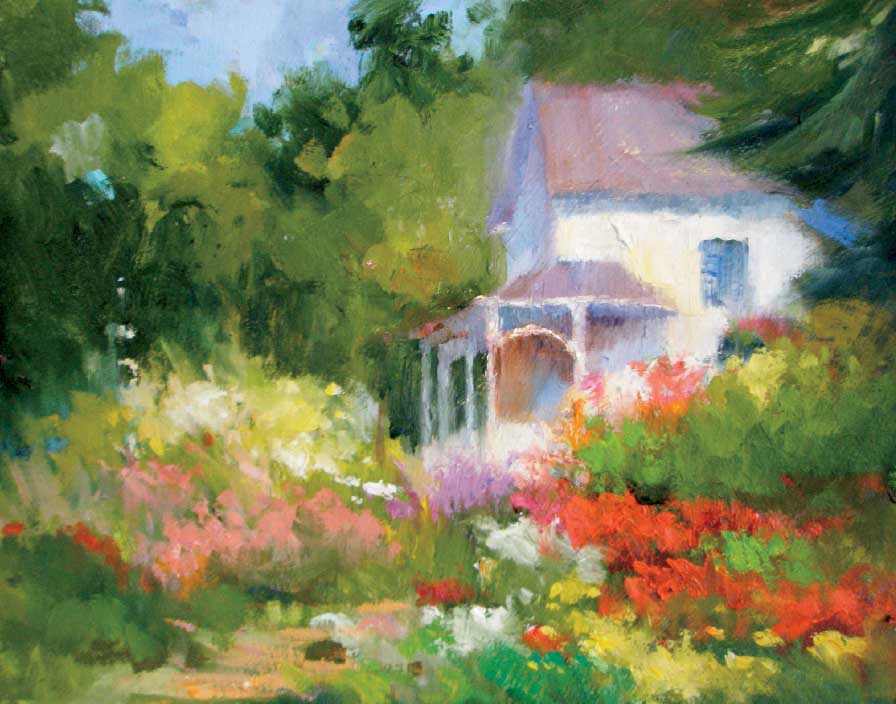 With no formal college or business training, it seems that Johnson has had an instinct for running a business. The art business in particular requires long hours, and many studios and galleries only make it the ten-year mark, according to Johnson.

“We are very busy,” she explains. “We have 300 students that come through weekly and we’re always planning for future workshops and working on schedules for classes and mini-workshops.” Mainstreet Art also sells ready made frames and art supplies so that new students can start classes with the supplies they need.”

It’s hard to imagine when she finds time to paint and create herself, but Johnson is a highly regarded artist in her own right, painting primarily with oil as well as some watercolor and pastel.

Johnson is a member of the American Impressionist Society and Oil Painters of America, winning an award of merit. She’s also a member of the Plein Air Painters of Chicago and Portrait Society of America. Johnson has won several awards in the competitions through the Richesons Art Gallery in Kimberly Wisconsin, as well as juried into several Plein Air competitions around the country. She is currently represented in two art galleries: Fine Line Design in Door County and The Castle Gallery in Fort Wayne, Indiana.

“I take almost all the workshops that we host. I’m interested in various approaches these artists take. The more I learn, the more I can share with our students, too.” She also teaches all subject matters, including portrait, plein air, still life, and florals; and she teaches workshops at The Clearing in Ellison Bay, Wisconsin and at The Dillman’s in Lac du Flambeau, Wisconsin. She does art demonstrations all over the suburbs of Wisconsin and Indiana.

Johnson is grateful to have Jay’s help these days. “Since my husband retired a year ago, he has been a great help to me, therefore giving me more time to paint. He finds it very rewarding and is a very good painter himself.” The Johnsons have gone on painting trips during summers to Sedona and along the coasts of Maine, Wisconsin, Michigan, Maryland, and Indiana. She has also traveled to China with a group of artists painting across the country for three weeks.

“It’s been a very rewarding experience,” says Johnson of owning Mainstreet Art. “It’s fascinating to see how many people are interested in learning to draw and paint. Many of our adult students keep coming every week for years. They find it to be part therapy, part social; they develop many new friends, continue to learn new things, and love the positive atmosphere.”
Seems that Johnson has found a little corner of the room for others who share her passion for art.