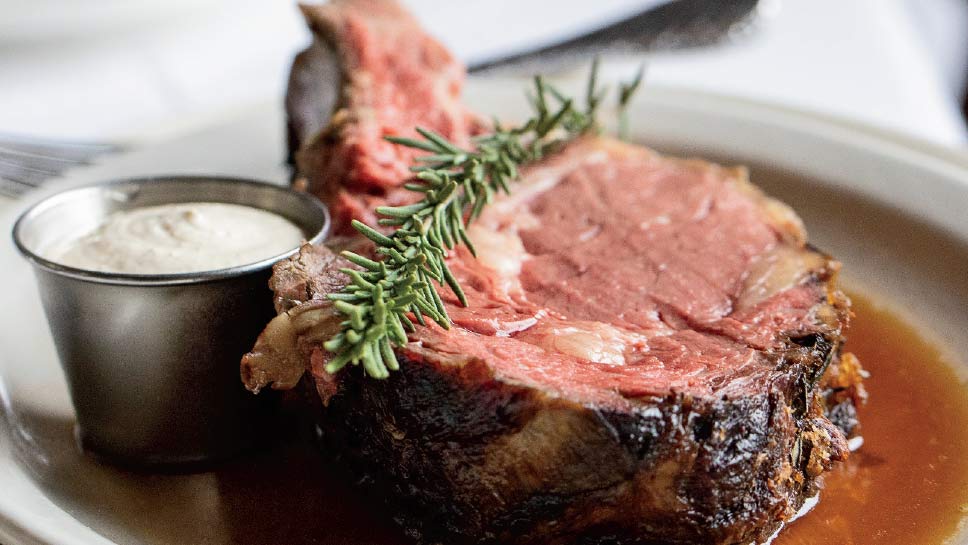 The difference between Chicago Prime Steakhouse in Schaumburg and just about every other beef-and-gin joint you’ve ever cut into over the years isn’t so much a particular cut of steak or some signature cocktail or some side that makes you go wow. It’s actually a man: the owner of the place, George John.

If you happen to make a reservation when he’s on duty, it’s impossible to miss him. The man has a mane of silver hair so striking it would make Richard Gere do a double take. He knows how to wear a suit: nattily but not ostentatiously. And walks the dining room like a Vegas pit boss, carefully monitoring the flow of food, the attention being shown to diners by his first-rate staff, and the general mood that each table is giving off. He looks and motions and occasionally, if the mood strikes him, slips into a booth or a chair and good-naturedly chats with his regulars.

Talk to the wait staff and they will tell you that 60 to 70 percent of Chicago Prime House’s customers are regulars. Once somebody finds Chicago Prime—it’s tucked rather inconspicuously into a commercial patch of real estate in Schaumburg—John figures his lifetime spent in the restaurant business will ensure they come back, not just once but at a regular clip. 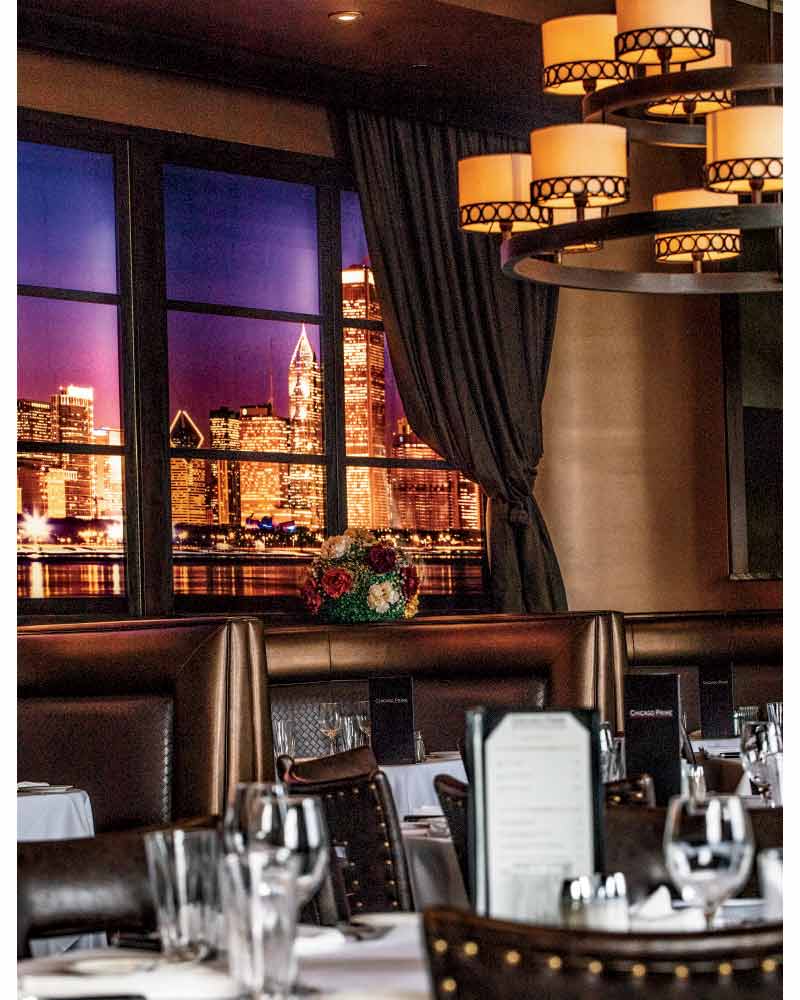 The result—at a time when chain restaurants seem to be outlasting so many family-run places—is a pure Chicago steakhouse experience that just happens to be located outside the city limits. Before you order, your waiter will effortlessly hoist a huge silver tray onto his wrist and show you all the steaks you’d come to expect at a place like this: all wet-aged USDA prime, which are butchered in house for a precise cut and then seared at almost 1,800 degrees in a broiler.

Filet mignon. Bone-in Kansas City strips. New York strips. A huge tomahawk chop for two. And our pick: the bone-in Cowboy cut rib-eye. You can dress them up with a number of topping—including a unique Cajun butter that’s been blackened into a deep espresso-like brew. But what impressed us the most was the precision of temperature—our steak was the platonic ideal of medium rare—as well as the rich au jus that moated the plate. 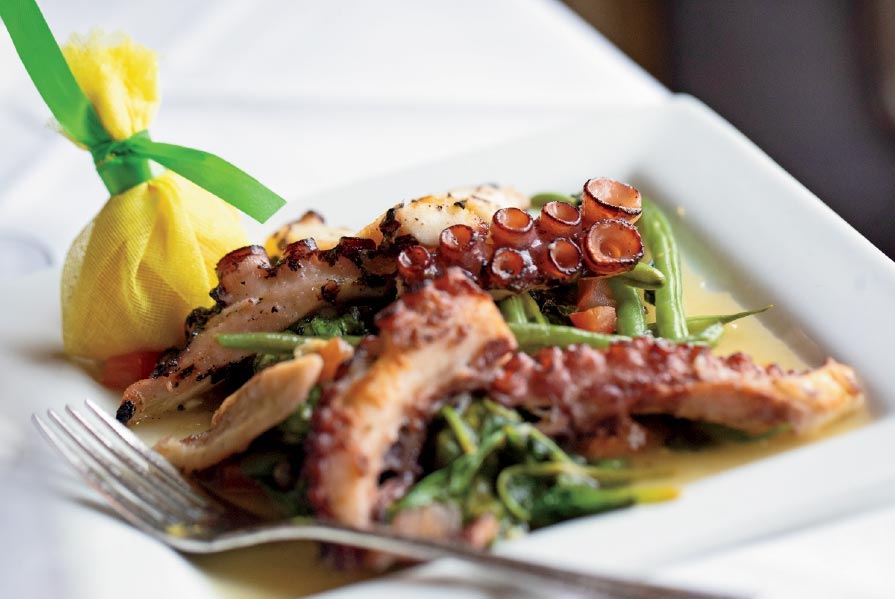 That’s a Chicago steakhouse for you: the notion that your beef might benefit for another layer of beef flavor. Truth is, it’s delicious: beef-on-beef happiness that you aren’t liable to find elsewhere.

The only thing more impressive may be the house’s prime rib offerings, which are prepped the old-fashioned way: packed with rosemary and thyme and slow roasted all night long and into the morning. If you want to know why prime ribs—once the pinnacle of steakhouse dining—has fallen out of favor of late it’s because virtually no one prepares them this skillfully anymore. George’s prime is as tender and rich as a lobe of foie gras—the marbling melted down into something like a compound butter—and served with a smart horseradish cream sauce.

That same old-school charm permeates Prime’s appetizer list, which is filled with subtle culinary tricks that only a guy who’s spent his life in the business would know to do. How many modern-day restaurants, for example, know that a little shot of anisette—the anise-flavored liquor—helps cut the earthiness of the spinach that blankets the house’s silver platter of Blue Pointe oysters Rockefeller. Or that a first-class shrimp de jonghe always has a slight undercurrent of sweetness?

The point, of course, is that George knows. And he’s been around long enough to realize that steakhouse fare blends rather well with some classic Greek staples. We were particularly charmed by what may—at first blush—have appeared to be a curious outlier: a beautiful appetizer of extremely tender octopus set in a creamy lemon sauce with tiny acidic caper grenades and lots of mild spinach. 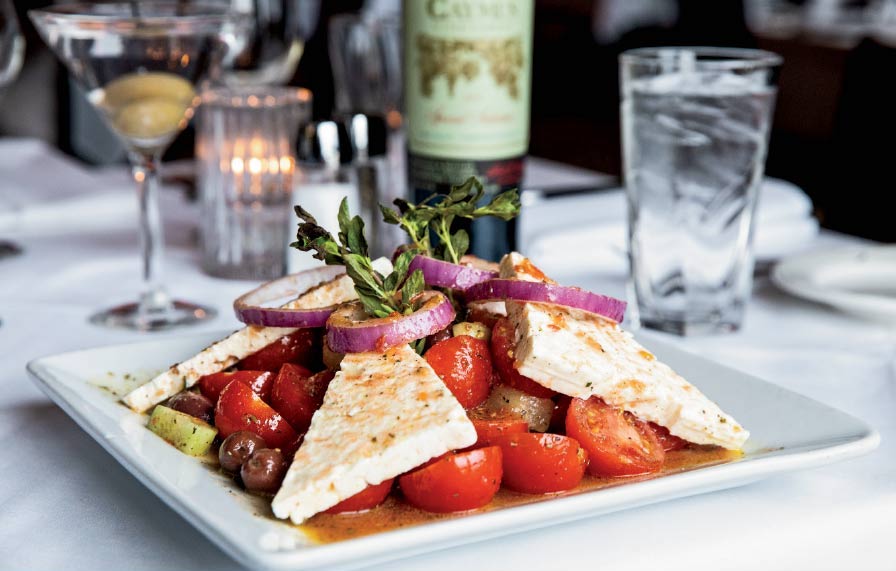 If, however, you follow along that line of thinking—offsetting the heftiness of traditional steak offerings with Mediterranean sides and salads—you’re going to be in for a distinctive experience. The house’s Mediterranean salad is a can’t miss offering: a refreshing, lettuce-free melange of tomatoes, olives, cucumber, red onion, and feta cheese set in brothy vinaigrette.

If that dish, an homage to the salads that George’s family prepared in his native Greece, tastes like summer to you it’s because George preserves a little bit of juice from in-season summer tomatoes and then drizzles into his vinaigrette adding a brightness you won’t expect to find this time of the year. 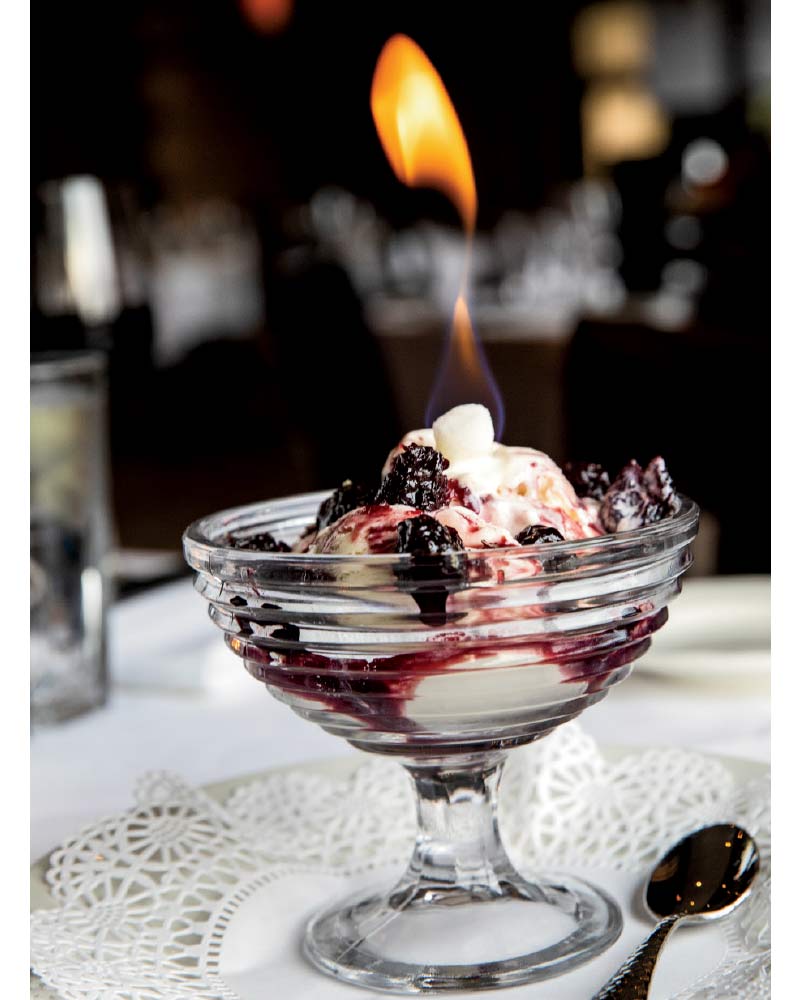 You’ll find that salad on the menu all year long, but occasionally George adds his signature cherries jubilee to the dessert list. It’s made for two—with a mountain full of Haagen-Dazs ice cream at its center—but the cherry-studded sauce is the real discovery: a citrusy delight (thanks to the orange and lemon peel) that manages to mix together brandy brown sugar and butter without feeling heavy. It’s smooth, brightly flavored and aromatic—an ice cream classic for all seasons.

Ditto, it must be said, for Chicago Prime Steakhouse, which proves that there’s nothing quite as timeless—or charming—as a family-run steakhouse that knows when to preserve tradition and when to cleverly subvert it.