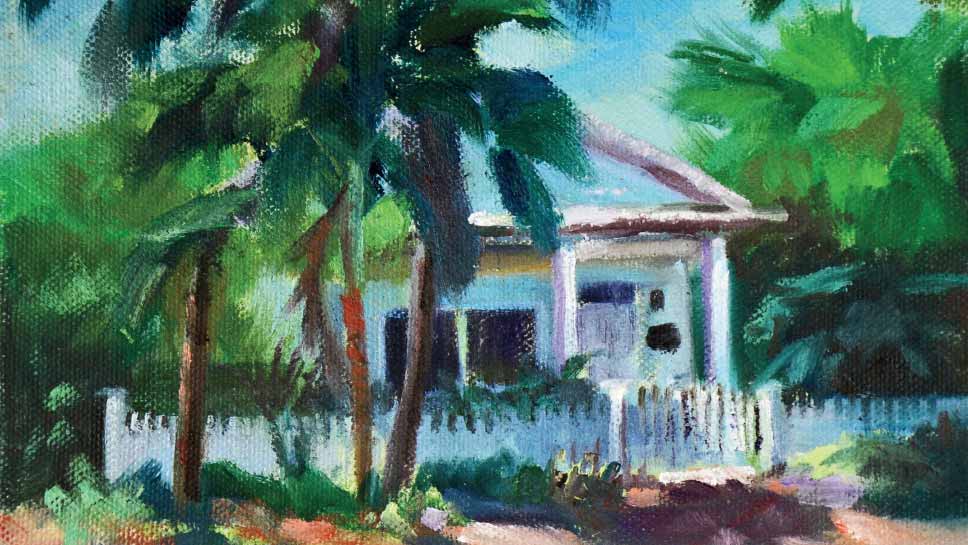 Barrington’s Sue Whitney reflects on adventure, setting goals, and the pursuit of an artistic life.

Sue Whitney knows that all good art should tell a story, and still treasures her first works of art—two wooden trivets she made as a little girl.

“I drew two simple scenes in crayon that my father varnished,” Whitney explains. “My favorite one is of a little bear near a tree, looking at a hole in the trunk, saying ‘honey!’”

It’s this optimism and zest for life, along with business acumen and a purpose-driven life that have allowed Whitney to chart her own fascinating journey. As a little girl growing up in Venetian Village area of Lake County, she recalls spending a lot of time playing sports in open fields, climbing trees, building forts, and swimming at Lake Miltmore during the summers. 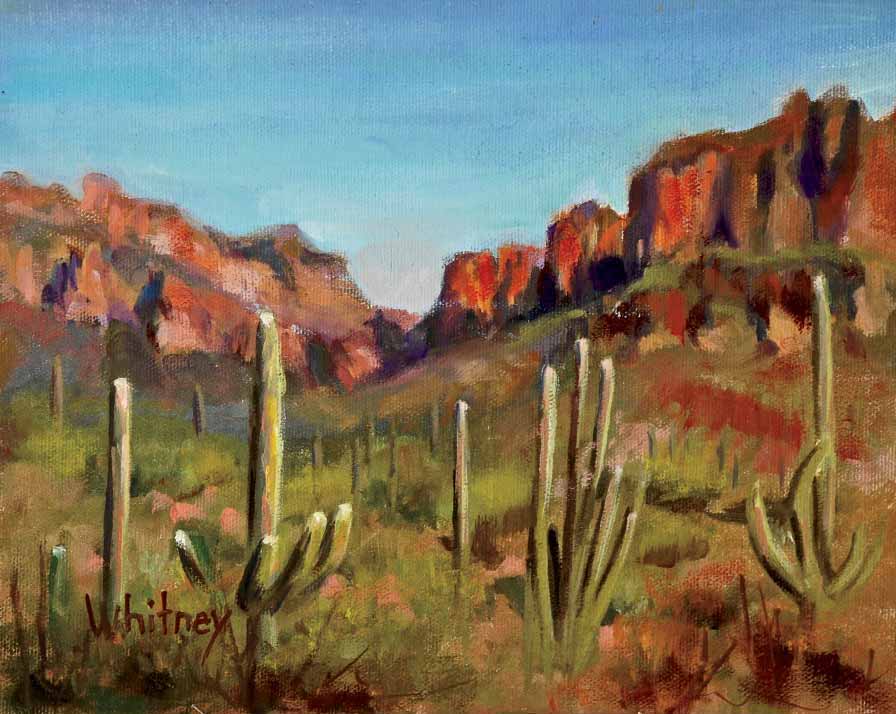 “On the Peralta Trail”

Then, as a high school student living in Libertyville, where her parents moved so she and her two brothers could take advantage of after-school activities, she played intramural sports, participated in French Club, Student Council, National Honor Society, theater, and flipped hamburgers at the local A&W. She also managed to take weekly art classes in drawing, pastel, and eventually oil painting at Adler Cultural Center.

These formative experiences would inform and shape her life over time, and allow her to embrace both an adventuresome spirit and her goal-oriented nature. “My pragmatic parents encouraged me to study something that I could support myself with,” she says. So she turned her eye to business, earning both her BA and MBA from Northern Illinois University. She squeezed in a few art electives in figure drawing and Art History. 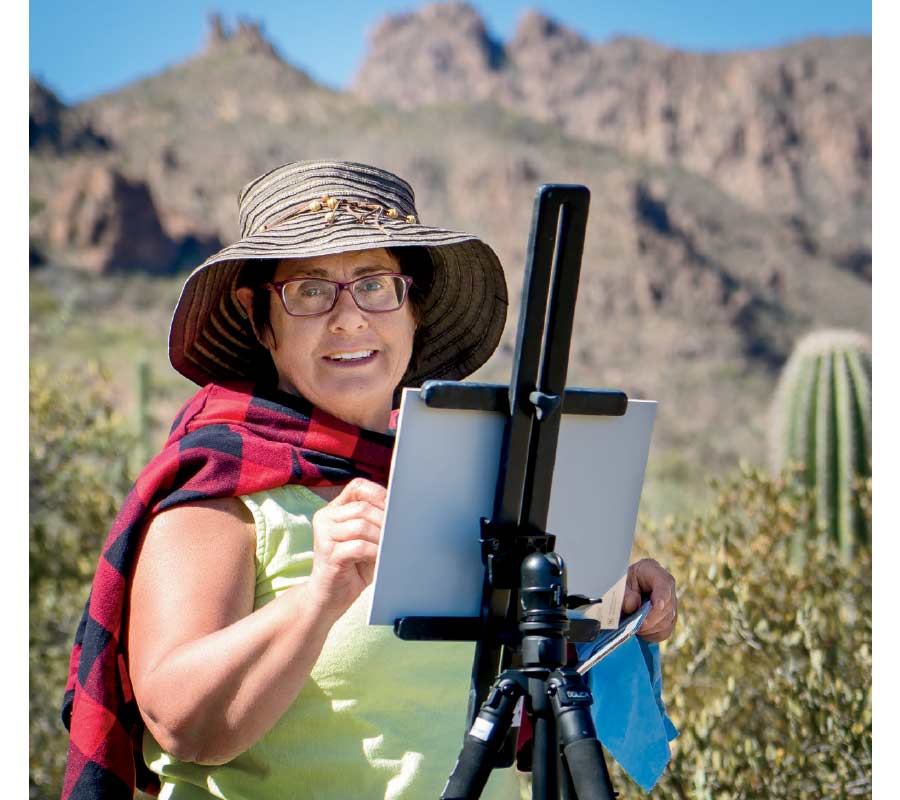 Thinking that she would teach, but not quite ready to jump into the work world, she and her husband Don (they met in high school, started dating as they began college, and married before graduating) traveled around Europe during a carefree time.

“We bought a Volvo and took delivery in Sweden so we could use it to travel and camp with our tent,” she says. “We had a heck of a good few months travelling all over Europe—from Sweden and Norway, up and over to England’s Cotswolds, back down to France and Paris, the Netherlands, German, and a last stop in Italy—before we decided it was time to go home and start working. It was nice to do this first while we were young and full of energy!”

Within a few years of graduation, Whitney began her 38-year career with Motorola. It would be a while before she could pour her efforts into painting, but she always knew she’d come back to it. 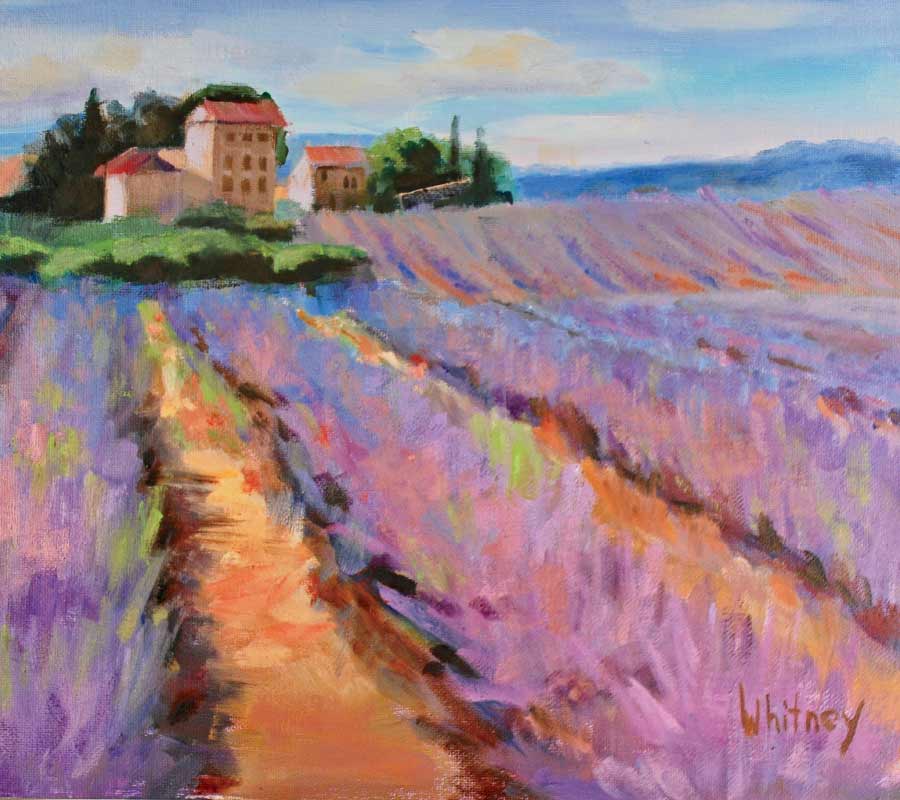 After starting in an entry-level marketing position, Whitney rose through the ranks, with her successful career culminating as director of software engineering tools and technology. In the business world, she took on opportunities that would challenge her, expand her knowledge and skills, and enable her to travel often to places like Asia, Europe, Australia, and Germany—making lifelong friends along the way. Her career, along with husband Don’s (he worked at Motorola in Schaumburg, as well), also prompted the couple’s move to Barrington, in the village not far from Roslyn School.

“We came here just after starting to work at Motorola, and Barrington was a good choice,” she says. “We wanted to be along a train route in a nice community, and we liked the openness and greenery around the village and the open fields, small lakes, and vistas that I see while driving from place to place.” 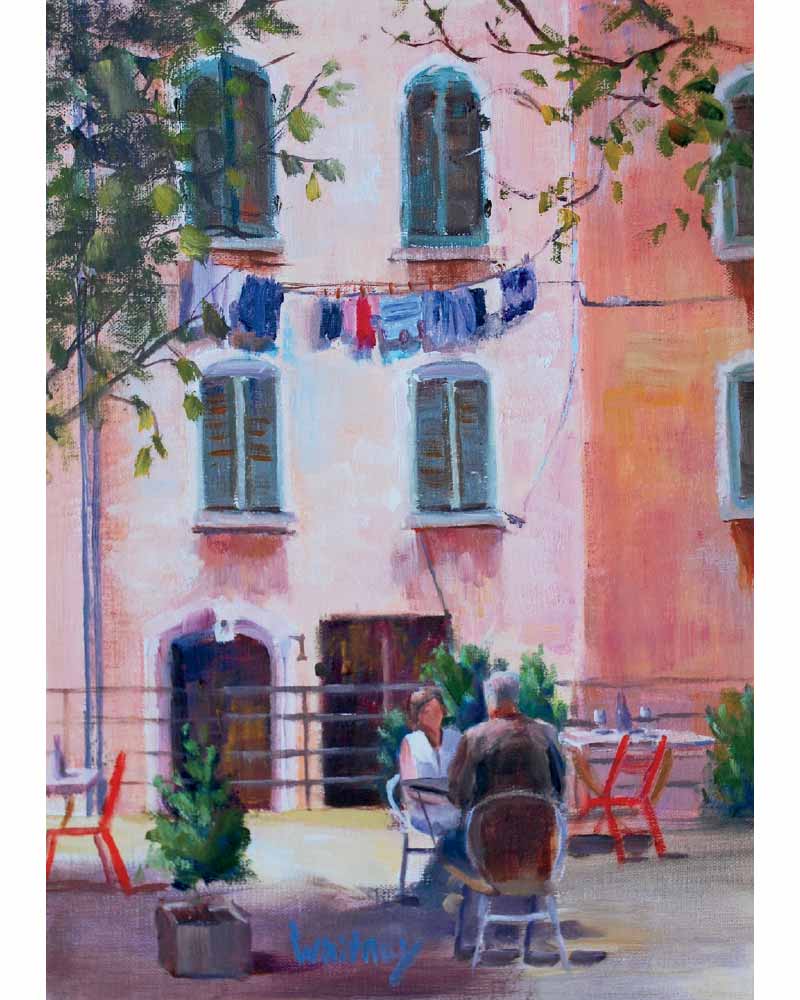 With all this working and living and traveling along the way (“Last count, I had been to 52 countries,” she says) Whitney also squirrelled away, in a very intentional way, a “vast array of photographic resources,” both with her mind and with her camera—to someday paint.

Someday came along around 1990 when Whitney decided to revive her interest in the medium. She started taking lessons with various teachers and local art institutions, including Kaleidoscope Art School in Barrington and with fine artist Veronica Potter.

She’s also taken watercolor painting workshops in Door County, at both Peninsula Art School and Washington Island Art League, and counts herself lucky to have studied with some notables there, such as Phil Austin, Jack Anderson, and Sharon Crosbie. Then, when she retired, she made painting one of the four goals she set for herself.

“Not surprisingly, with a business management background, I left my professional career with specific goals in mind. Artwork was on the top of the list,” she says, laughing about her penchant for setting, and achieving, goals throughout her life. “Life is not a rehearsal. I always said that I would return to the oil painting that I had enjoyed in my early days. I love watercolor, the way it finds its own way on a page, and chose watercolor at the time because it could fit into my busy, heavy work schedule better.” 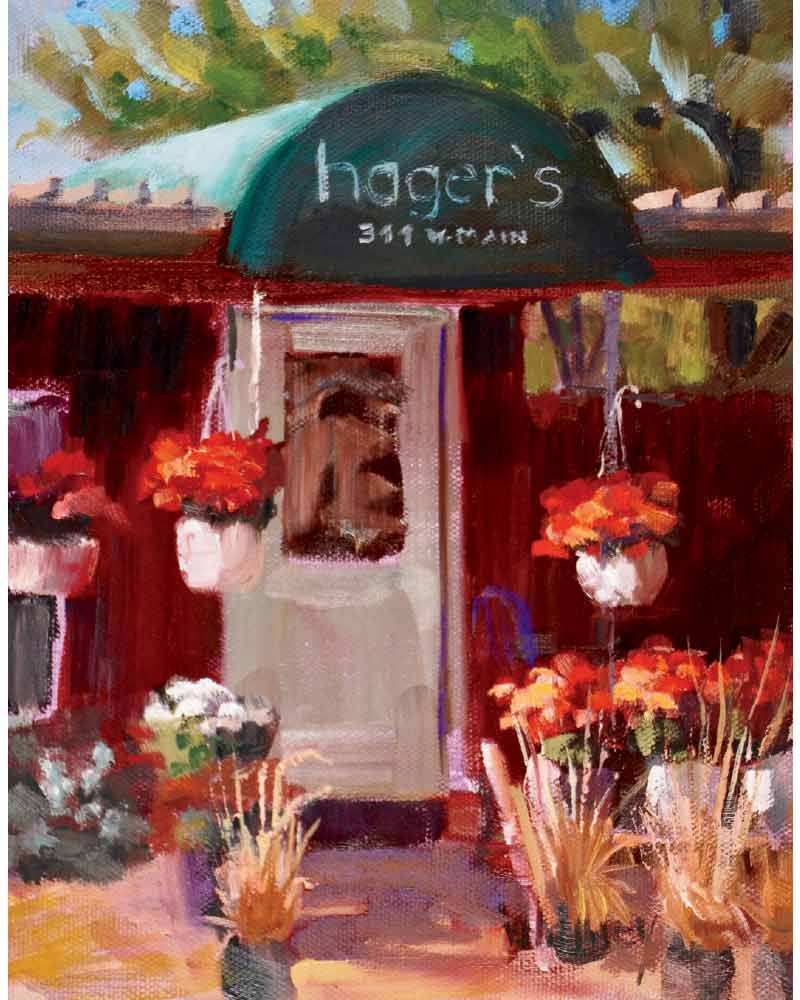 In fact, before she officially retired, Whitney dabbled in watercolors even on long international flights. “I discovered it was a perfect activity on those 15-hour flights to Dehli,” she says. “It just takes a cup of water, piece of paper, a few brushes, and a few pigment tubes.” While she enjoyed watercolors, the labor, and overhead required to frame and ship the pieces took time away from what she really wanted to do—paint. And she knew she’d want to get back to oil painting someday.

Now, she loves plein air oil painting most, and she does it anywhere she can. “It’s great because one can see much more variation in color than from a photograph, or even a digital image,” she explains. “There is also a different feel and emotion that comes to one’s senses outside … birds, rushing water sunsets, sand under my feet, and the swaying of palm fronds. This all plays a role in capturing the moment. I wish I had started plein air earlier.”

She says this is especially true on some of the annual backpacking and camping trips with her two brothers. This spring, they’ll venture among the cactus of the Arizona Sonora Desert. And she’ll paint. 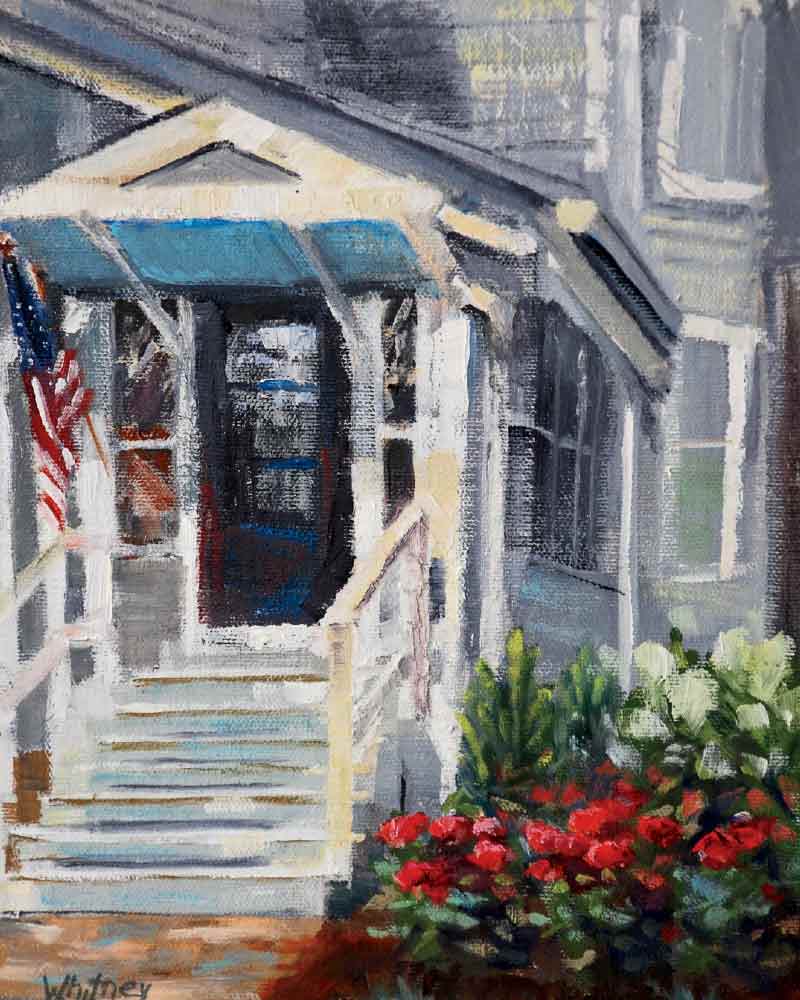 “Summertime in our Town”

And as her painting evolved into a business, she became a solo-prenueur. “This is the other side of my painting activity—the business side,” she says. She’s sold a number of paintings at galleries in Door County and is represented by the Cupola House Gallery in Egg Harbor, Wisconsin. She sells paintings at plein air events and shows, and to local individuals and businesses that discover and like her work. The Visitors Center in Long Grove commissioned prints and postcards of a nocturne of a Christmas scene she had painted. And, she sells her work on ETSY and EBay, through her blog, and via social media that attracts attention to her work.

Two of Whitney’s art pieces were selected for the Starline Gallery in Harvard, Illinois, and her work has been shown for several years at both Cedarburg Plein Air Festival, the Prairie Arts Center event in Schaumburg, and the Door County Plein Air Quick Paint as part of that Invitational. Locally, she shows at Barrington Area Library, and Barrington White House, as part of the Barrington Cultural Arts Center show.

In her spare time, as if she could possibly have any, and as one of her retirement goals, she gives back—mission trips with her church and donating her artwork to worthy organizations such as The United Way, the Illinois Art Education Association, and Walk On Farms.

She also still finds time to garden, growing hundreds of seedlings (many of which she sells for mission donations) and most of her own vegetables during summer. And, of course, she and Don continue to travel extensively as well. They spent five weeks “living” in Provence, France last year and hope to visit Argentina soon.

Stay tuned. We have a feeling Sue Whitney is just getting started.