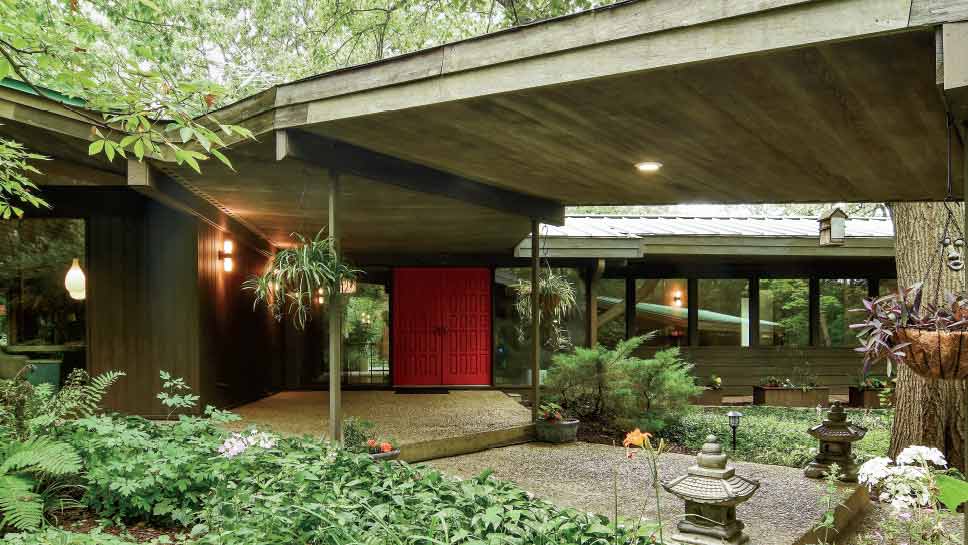 A single-owner, vintage home from 1965 is on the market and ready for its next owner. With a pedigree that includes ties to such architectural luminaries as Frank Lloyd Wright and Mies van der Rohe, the property in the Timberlake neighborhood of Barrington offers a perfectly preserved moment in time—and a few family memories to go with it.

Her father built cabinets and furniture for Frank Lloyd Wright. Her mother upholstered those high-end pieces for some of the most discriminating Gold Coast clients, and made custom draperies as well. Growing up in Riverside, where the historic landmark homes are as unique as the winding crisscross plan of the village, Rosemary Libby was almost destined for the life she would have someday in Barrington’s Timberlake community.

As her daughter, Julie Zamudio, explains, Rosemary was immersed in a world of design and art at one of the most extraordinary moments in Chicago’s architectural history. “She ended up becoming a legal secretary, but she grew up in that household with that flair for design,” says Zamudio, continuing to tell the story about how her mother met her father, Richard Libby, a young engineering student at IIT (studying at an institution led by another Chicago architecture luminary, Mies van der Rohe) in the early 1950s. 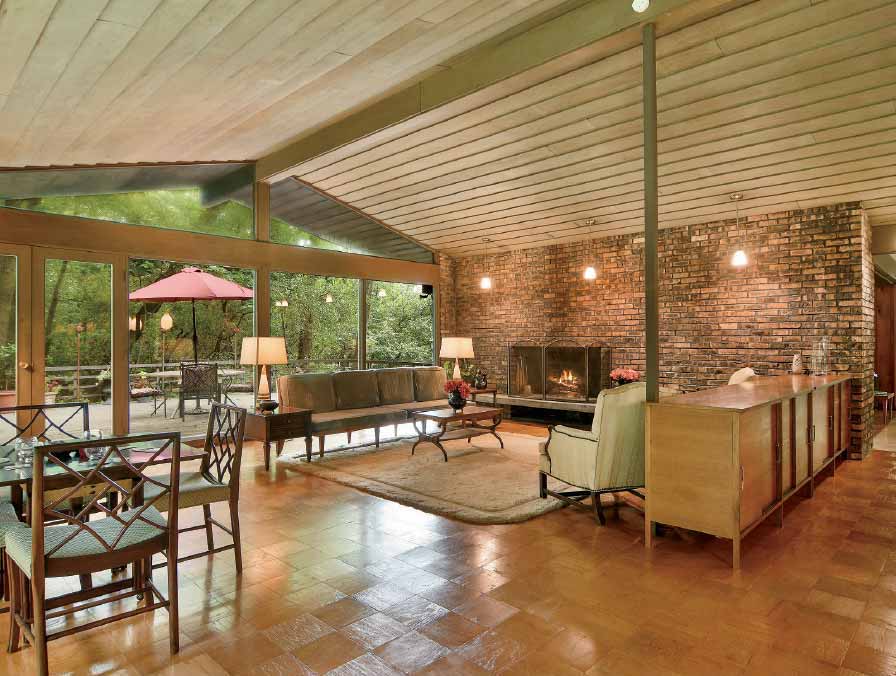 “The feeling of nature being one with the home, the open great room, dining and kitchen areas as one large gathering space…”

“My father was a World War II veteran. He came out and got a G.I. Bill to get a mechanical engineering degree at IIT,” she adds. “They met at his first job. They started dating and they both got fired from that job because they were fraternizing. But they were such a perfect match … my mom could envision things and he could make them happen. He could make all her dreams come true.”

Rosemary and Richard Libby (or “Rosie and Dick,” as they were known at St. Anne’s Catholic Church in Barrington) were married in 1952. A few years later, they discovered a burgeoning community called Timberlake and set out to build their first home together. 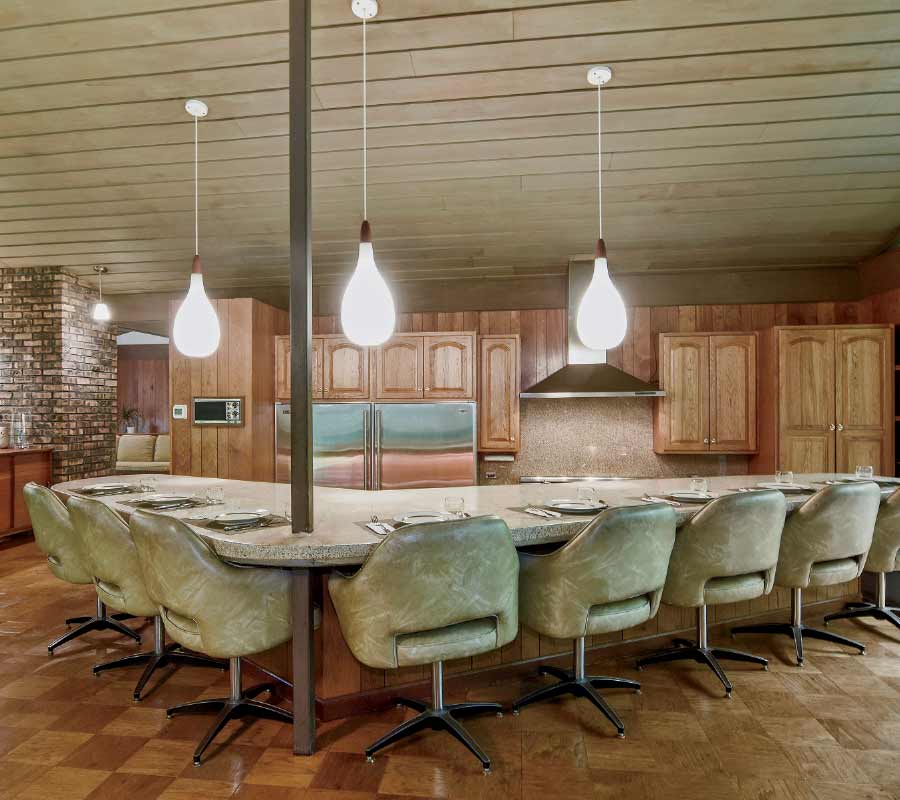 “They used panels from (World War II-era) barracks they were throwing away or giving away for that first house,” says Zamudio, who recently put her beloved family home on the market after the death of her parents. “The plan was to live in that 900-square-foot home until they had kids … and they ended up having six in that three-bedroom home.”

But Richard Libby was a visionary, and even though money was tight, he bought land with a dream of a bigger home for he and Rosie to raise their family in—right there in the same subdivision. By 1964, the house at 65 Timberlake Parkway was underway, with special features rare at that time in residential construction.

Not only did Richard design the home—building on his extensive understanding of mechanical design and construction—but he built it, with help and support from Rosemary.

“It took them two years to build because they did a lot of it themselves. We moved into the house in 1965,” Zamudio adds. “When my dad died last year at 92, he was the longest living resident in Timberlake. They loved Timberlake and that’s a big part of why they stayed there—the beach and the community. It’s one of the best subdivisions to grow up in because of the mixture of people they had there … it was not all elite people. There were people who built their own homes and were blue collar and people who were CEOs. My dad designed our house, a steel structure.” 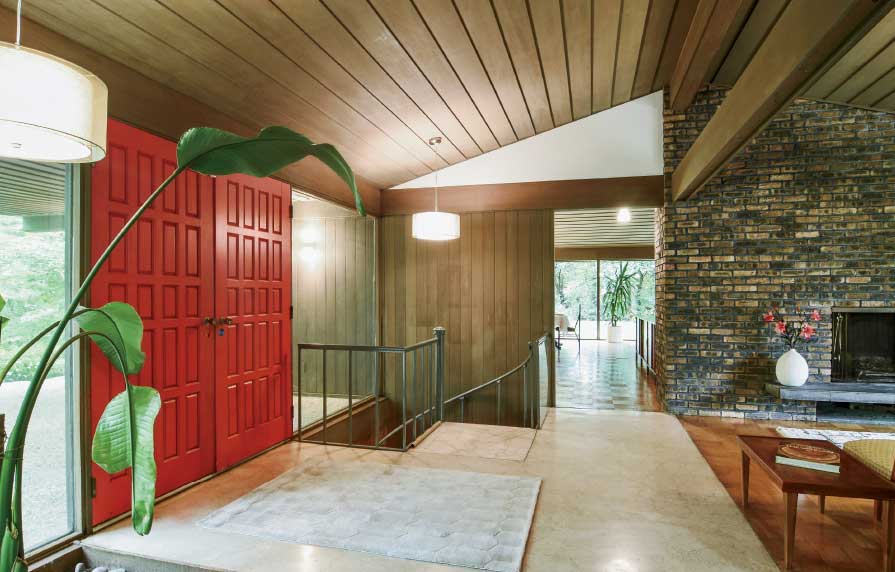 This is not your ordinary wood frame house. Designed with large landscape windows, vaulted ceilings, and natural light to bolster the connection between indoors and out, Zamudio’s childhood home—currently offered at $725,000—is a Mid-Century Modern classic.

The distinctive six-bedroom, walk-out ranch celebrates Wright’s open concept of fewer, larger rooms that flow perfectly and harmonize with both everyday life and gracious entertaining. A sun-drenched open great room concept offers a large fireplace, three seating areas, a full dining space, and a gourmet open state-of-the-art kitchen all leading to spacious decks and lush grounds. With hardwood floors and floor-to-ceiling windows throughout, all rooms have views of the park-like setting of the neighboring 46-acre lake with private beach.

“Because it’s a unique house, built like a commercial building with a steel structure, a lot of the issues you have with other homes, you will not have with this,” says Zamudio, who followed in her father’s footsteps to become a structural engineer and construction project manager. “In the great room there’s a beam that goes 53 feet long and that was all designed because that’s the largest beam you could put on a semi-truck, to get it delivered to the house. I think my father was immensely influenced by my grandfather and his experience working for Frank Lloyd Wright and all his high-end clients, in Oak Park, and in Lake Geneva.”

While Zamudio left the original parquet floors, paneling, and other vintage features, she used her construction know-how and upgraded the things she knew would be appealing to buyers, including an energy-efficient HVAC system, new water heater, and upgraded deck. Her father recently had invested in a new roof, so she thinks the Mid-Century gem is primed to endure for decades to come. 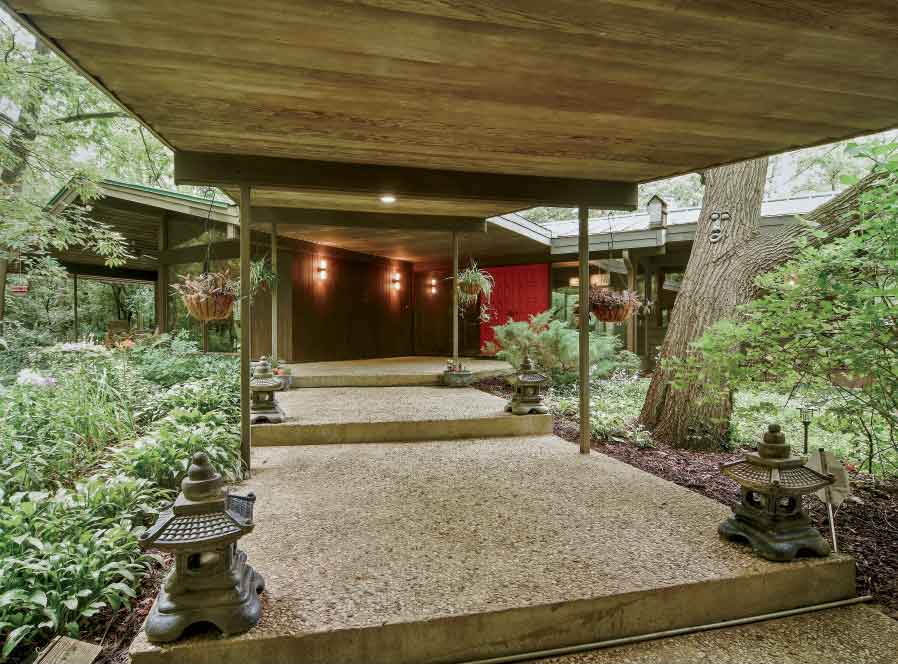 “The bones of the house are immaculate. I wasn’t going to change decor because what I chose might not be what other people choose,” she says. “The house is original. There’s very little that isn’t original. My parents updated the kitchen a while back, so there are stainless steel appliances—Subzero and Viking and Bosch—all the top-of-the-line everything.”

Heidi Seagren, the Realtor representing the property (and childhood friends of Zamudio’s realtor husband), says she not only fell in love with the home, but also its roots and connections to the Timberlake community.

“Julie’s husband was a childhood friend of mine from elementary school in Barrington. I hadn’t talked to him in years,” says Seagren, explaining that she was among several agents being interviewed. “Since I have loved houses since I was 4, I jumped at the chance to market and list a true Mid-Century Modern custom, one-owner home.”

However, Zamudio says that the decision to hire Seagren wasn’t about supporting an old friend. It was about hiring a Realtor who could appreciate how the home was built and designed—envisioning the potential to revive it to its original Mid-Century glory.

“My mom and dad had 55 years of clutter in that house, and she could see past it. Most other people couldn’t see past it,” she adds.
Staging the nearly 4,000 square foot home meant highlighting some of the original furniture that Richard Libby custom built for it, with guidance from his father-in-law and former Wright employee. Seagren says this is one of many things that makes the Timberlake property special.

“What stands out to me as a broker is that we have such a local pride in and connection to Frank Lloyd Wright in the Chicago area. People bandy about the term ‘Mid-Century Modern’ and ‘inspired by Frank Lloyd Wright’ to describe listings often. This is truly both,” she says. “The feeling of nature being one with the home, the open great room, dining and kitchen areas as one large gathering space, the red front door, the 53-foot beam support, and the green features of a home built in 1965 are definitively Mid-Century Modern. But my favorite part of the story of this home is the fact that the builder/owner’s parents worked directly for Frank Lloyd Wright … how more inspired by the influential architect can a home be?”

The listing has caught attention in the Chicago architectural community and the national design community as well, as recently featured in Dwell magazine.

To Zamudio, this is fulfilling not because of the potential profit on the home but because everything she’s done to get it this far has been a labor of love to honor two people who gave she and her siblings the very best start in life.

“They had six kids. They did all of this while they were raising their children … working on the house and raising us kids at the same time. They used their talents and they were risk takers. And they lived a wonderful life,” she says, adding that she and her four sisters all pursue technical or engineering degrees in an era when that was uncommon for women. “They struggled and persevered and the work ethic they instilled in all of us is amazing. They were fixtures in the community and this is my way to pay homage to everything they stood for.”