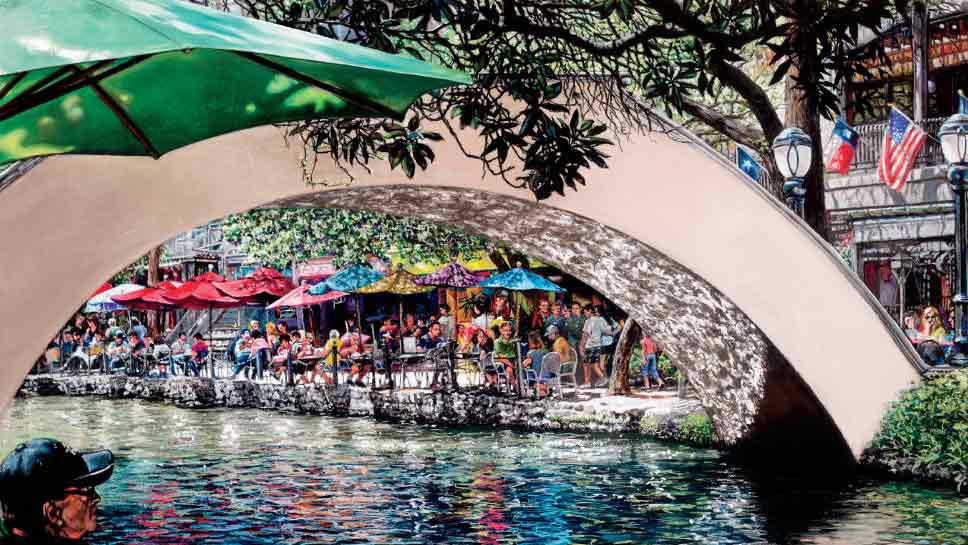 The multi-talented Chuck Sisson of Barrington shares his life’s journey through the arts.

Just recently, Chuck Sisson got a guest acting gig as a grouchy old man passenger in the backseat of a “rideshare” car. It was filmed in Downers Grove for a TV pilot with the working title Dryver. But the man who’s called Barrington home since 2007 is anything but grouchy. In fact, he approaches life with gusto and could be considered a jack-of-all-trades—in the arts, that is. He paints, draws, sketches, sings, acts, and has even done some improv.

“Once you are in the arts, it permeates your life,” says Sisson. “It comes from the same side of the brain.” The 71-year old retiree lives near Mckray Memorial Golf Club with wife Becky (his high school sweetheart) of 53 years.

Before he took his first painting class at age 61, Sisson made his living for many years in graphic design, illustration, and art directing with his own business, Chuck Sisson Design Inc., in Des Plaines. “Everything was mainly print,” he says. “In the early years, everything was done on a board. Later, we did computer drawing on the computer with a mouse and I felt that I was losing the dexterity of drawing with my hand.” 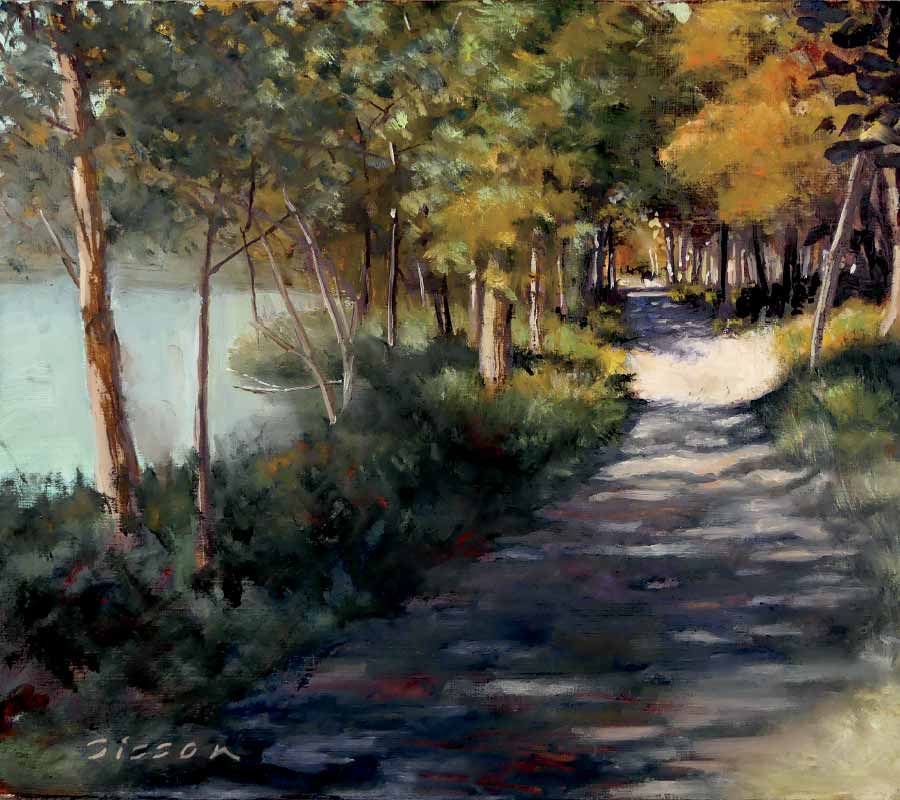 Autumn Walk by the Lake

Sisson created booklets and pamphlets for companies like Motorola “when the phone phase came along,” he says. He worked with other independent professionals including copy editors and account executives. “The work was all freelance. We had to go out and land the work, but it worked out for many years.”

In addition to his success in a creative business, Sisson always had the urge to explore other artistic outlets. “Back around 2000, I got the idea that I always wanted to act,” He remembers. “I ended up taking an 8-week course in Arlington Heights with Second City Improv at the Metropolis Performing Arts Centre.” That 8-weeks turned into a year. “I loved it so much, and our class stuck together.” 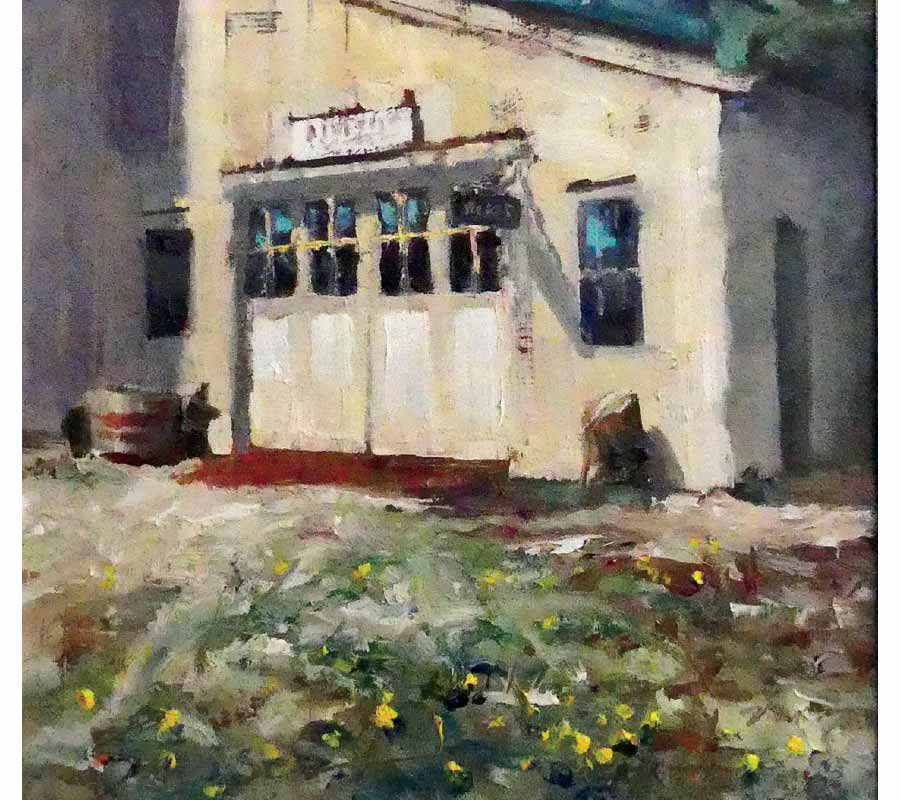 Sisson looked around for parts, auditioned, and played the lead role in The Baker’s Wife at the Village Players Performing Arts Center in Oak Park. “I was the baker,” he says matter of factly. He must’ve done something right because in 2012, Sisson took home the Jeff Award for Non-Equity Performer in Principal Role for that performance.

“I averaged five or six shows per year, and it was so much fun,” he adds. And, while many actors overlap shows, with rehearsals beginning for their next show before they’ve ended a run, Sisson says, “I like to end a show before I start a new one. I even did The Full Monty at Oak Park, shows at The Metropolis, and many shows at Cutting Hall Performing Arts Center in Palatine, presented by Music On Stage, as well as Theatre Nebula. In Chicago, he performed at Timeline Theatre Company and Porchlight Music Theatre. 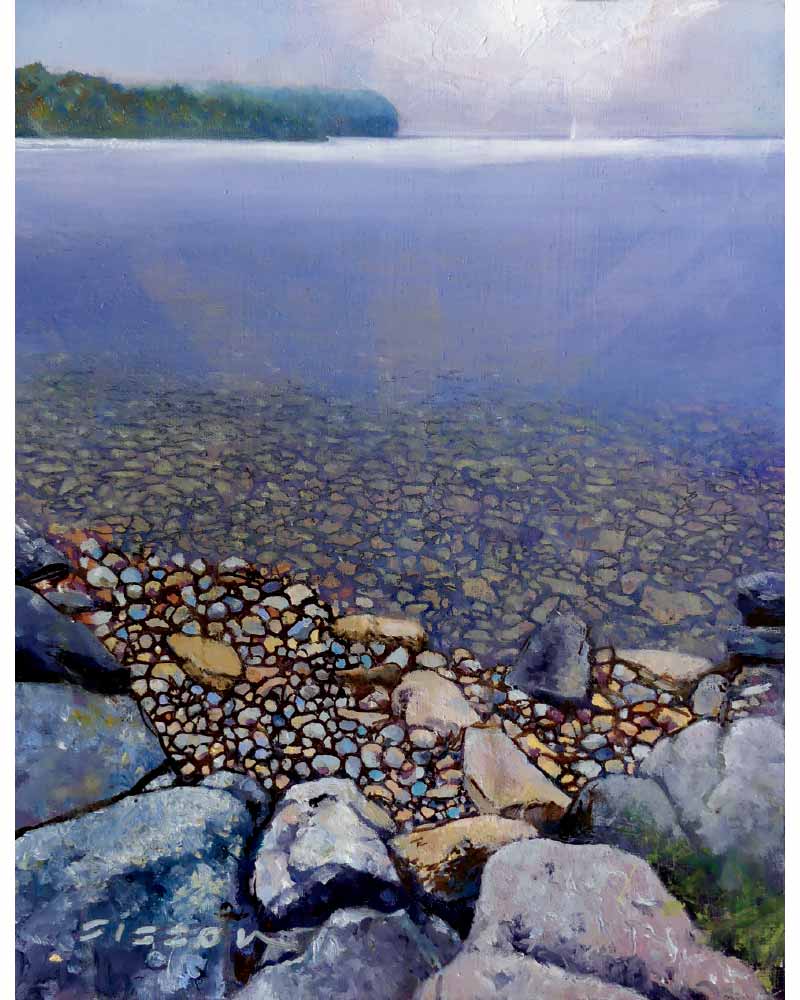 Which brings us to the music. Sisson has been singing for years, both as a actor performing roles in numerous musicals, and as part of choral groups, trios, and quartets, including a barbershop quartet, Chiefs of Staff, and the New Tradition Chorus (comprised of a 100 men) based in Northbrook. The Chiefs of Staff traveled around the world at one point, doing two shows per month all around the country, from the west coast to Maine, and also in New Zealand, Australia, Europe, Ireland, and Alaska. “We were named the International Quartette Champions in San Antonio,” adds Sisson.

When asked if he sings much these days, Sisson laughs, “Just for my own amazement! And if a part requires it, of course I sing.” He’s also slowed down on the acting. “For some reason, they only give me the old man parts,” he laughs. “Plus, I’m really trying to put an effort into my art work because that’s where my interest really lies now.” 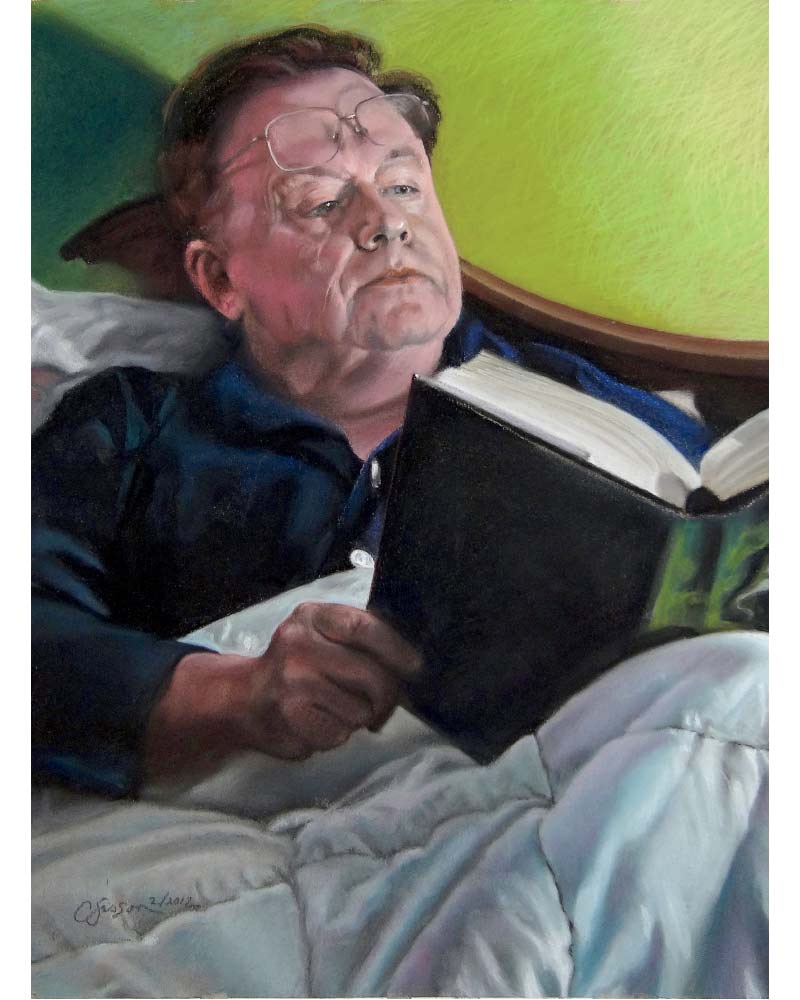 Sisson took up art after he retired five years ago while he was still doing quite a bit of acting in the greater Chicago area. “I was doing a show at Light Opera Works (now called Music Theater Works) and went downtown to pick up a script,” he recalls. “It was located in a building that houses the arts, and I saw an ad for a guy named Richard Halstead who taught portrait painting, so I took his class for a couple of years.” As he got more interested in still life and landscape painting, he moved into pastel and charcoal and worked his way up to oil painting. “I still work in all three mediums,” he adds.

An active member of Barrington Cultural Arts Center (BCAC), Sisson participated in “Faces and Places of Barrington” two years ago. “We did real portrait classes with local civic professionals, such as policemen, teachers, the mayor, sitting for us.” He also participated in “Life on the Back 9” with BCAC, and will be showing his work at the Barrington White House in December. He’s also active with Plein Air Painters of Chicago where he will be exhibiting his work, which will also be for sale, at the Palette and Chisel Academy of Fine Arts in Chicago from now until February.

Sisson and his wife moved out to Barrington in 2007 when their daughters, Franscine Sauber and Jodi Reich, had families of their own. “We love it here. If we want to go downtown, we can jump on the train and go in,” he says. And, Sisson is preparing to be a great grandfather. “My granddaughter is going to have a baby girl,” he says as if he can’t quite believe it himself.

It seems that being eternally curious about all things artistic is what keeps Sisson young at heart and happy. When asked if there is anything else he wants to share, Sisson delivers, deadpan, “I could make up some things, he laughs, but we’ll stick with the facts.”