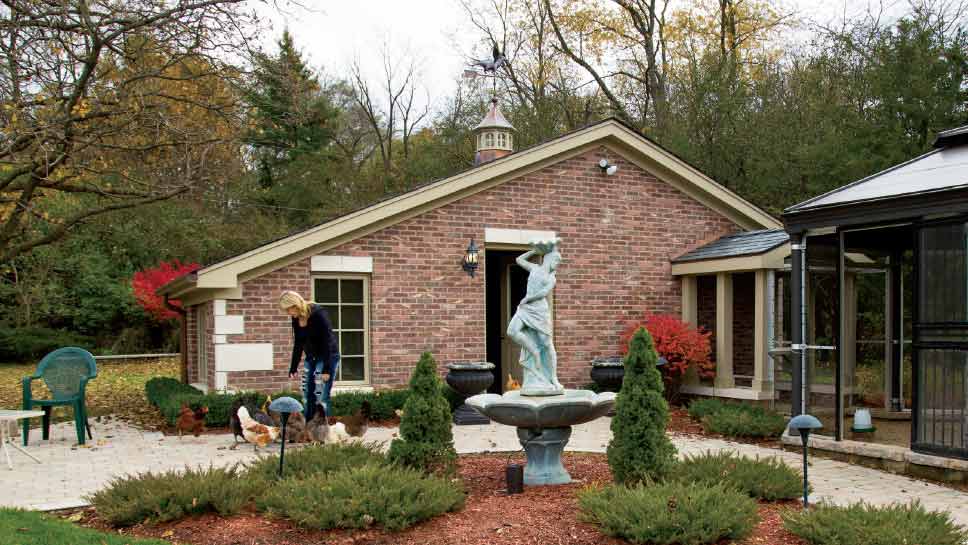 The backyard chicken trend is alive and well in the Barrington area, with more families than ever opting to have their own source of cage free eggs—along with a new kind of household pet. PHOTOGRAPHY BY MONICA KASS ROGERS

Chickens, chickens, and more chickens … big fat hens, nesting on a bright yellow background along with the message “3 BR/2 BA and Chicken Coop (We get you.)” have populated Chicago billboards, transit posters, digital, social media, and television ads in a rotation for much of 2018.

Garnering in excess of 175 million mass media impressions, the chicken-centered campaign from Baird & Warner was designed to communicate to the Chicago area that the realty company really gets what homebuyers want these days—including that backyard chicken coop.

“The whole premise revolves around trends we see in the marketplace, with some of the most fun being vinyl, chicken coops, and yoga rooms,” says Peter Papakyriacou, Baird & Warner’s senior vice president of marketing and communications. “It’s all about finding that perfect home for people, something an app or technology alone can’t do for them. And that’s the name of our campaign: ‘We get you’.” That Baird Warner has had enough requests from homeowners interested in raising backyard hens to hang a campaign on it, indicates that the trend has far from peaked. 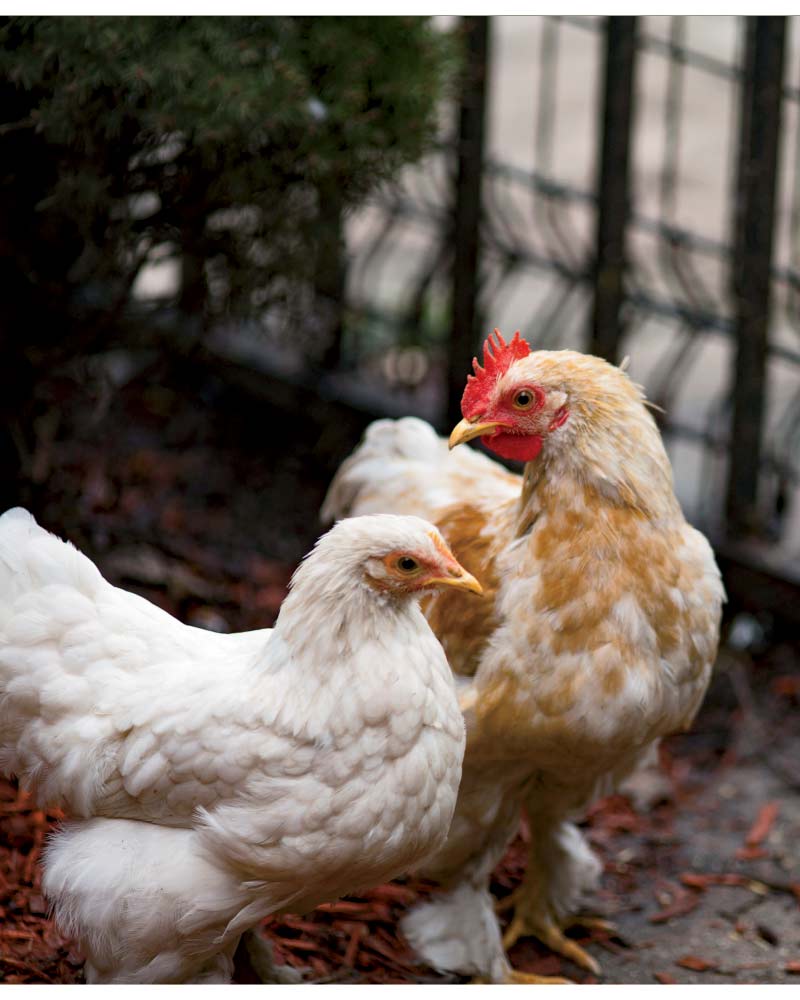 “Backyard chickens are part of a lifestyle choice,” she says, explaining that many of her chicken-consultation clients are urban and suburban families who view their backyards as ecosytems working in a natural loop. “Chickens eat the family’s kitchen scraps, as well as bugs and pests in the yard. Chicken waste enriches the soil and their eggs feed the families that care for them. It all works together.” 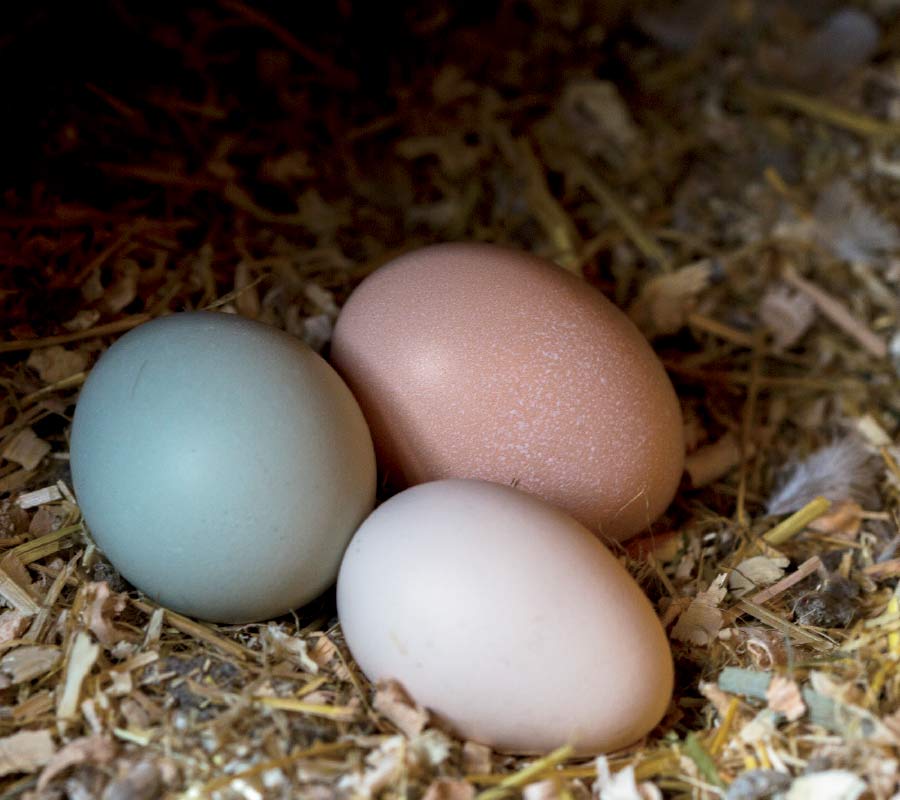 The continued ramping up of backyard chicken ownership has also fueled an attitudinal change toward the birds throughout Chicago, including Barrington. Owners see them as pets, rather than simply food providers. 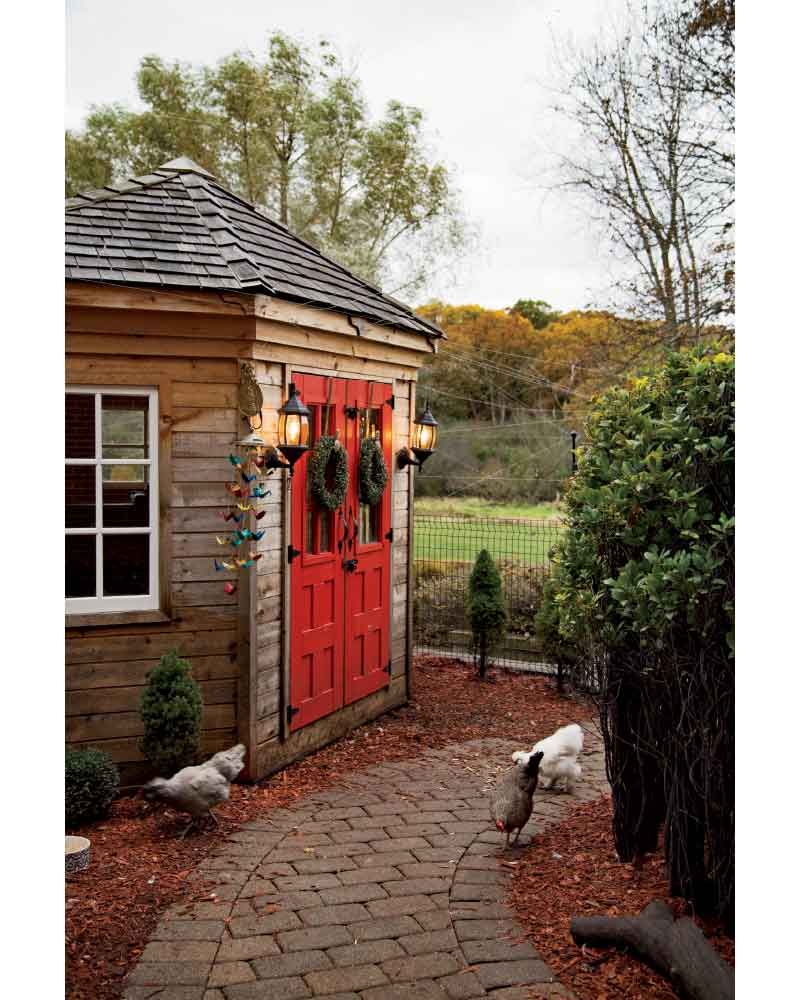 Chicken breeder Jim Konecny, owner of Lake Barrington Feed & Supply and co-host of the Barrington Chicken Club says some customers put as much research into choosing a chicken as they do in purchasing a puppy.

“Oh yes,” says Konecny. “People come in with their lists. Personality is a big one, with people wanting friendly birds such as the Buff Orpington or other docile English breeds. They’re also interested in the color of the eggs and exotic looks from breeds so rare you have to get on a waitlist.” 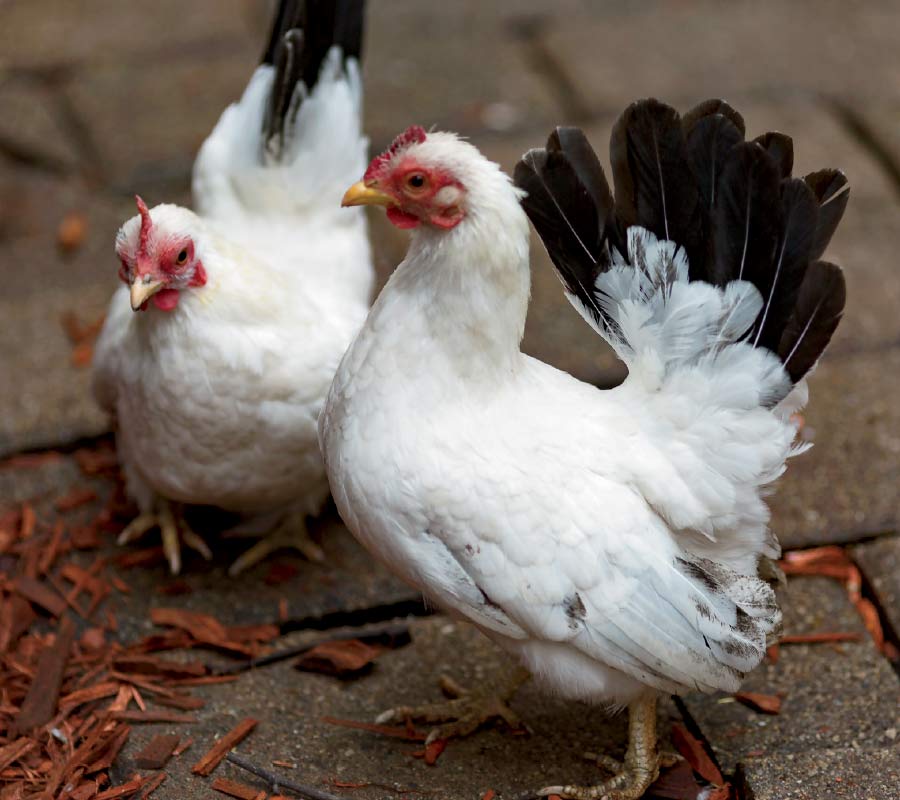 Ameraucana chickens are popular for their beautiful blue eggs. And the Black Copper Maran chicken (copper up top; black bottom) is a French breed that lays eggs with intensely copper hued shells. “Everybody wants the Black Copper Moran right now,” says Konecny, “but you can’t get it from the hatchery, it must be specially ordered.” And the more unusual breeds cost more—$20 to $100 apiece compared to $4 to $10 for a standard bird.

Practical issues in bird selection include winter hardiness, which Konecny says comes with any of the English or American breeds. 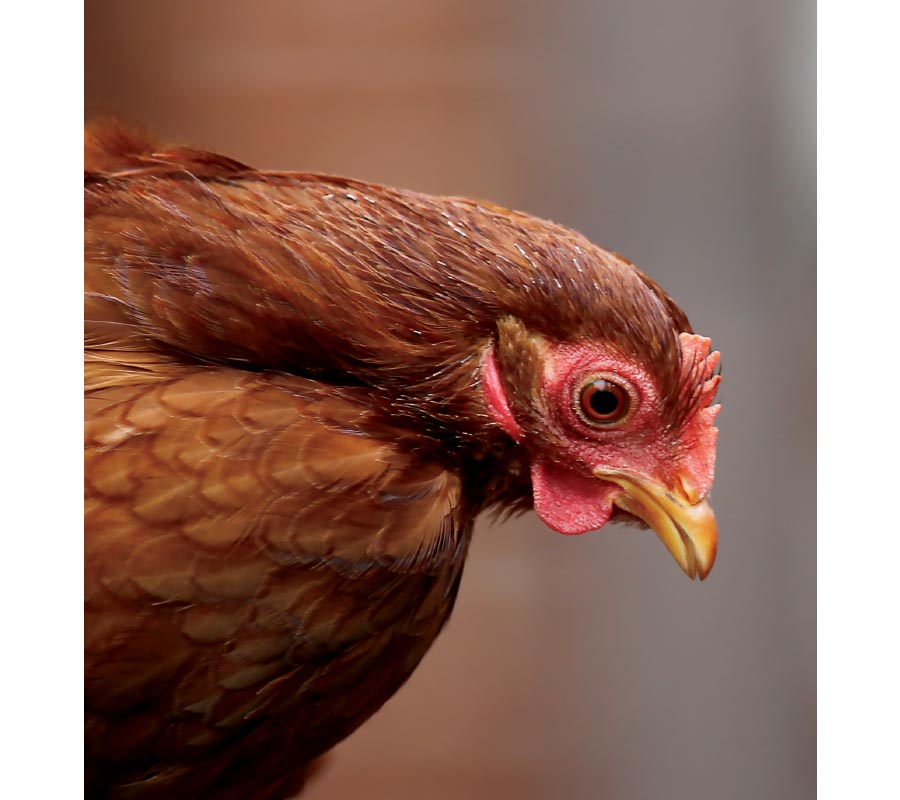 Contributing to chickens’ rise in pet status, with many backyard chicken owners raising their birds from chicks, Konecny explains that the imprinting that happens with daily handling of the baby birds bonds the chicken owners with their flock, making it much less likely that they will cull the chickens once they stop laying eggs. “I’d say about 85 percent of backyard chicken owners come to view their birds as companion animals, not just utility birds,” agrees Murtoff. “They keep their chickens long after they’ve stopped laying. They’ve named those birds and gotten to know their personalities and quirks and have bonded to them as backyard pets.”

“You really do learn a lot by talking to others who have chickens,” says Helen Sheyka, who has been raising chickens in Barrington Hills since 1994. To share what she learned over the years, and learn from others’ experiences Sheyka joined Konecny in hosting the chicken club. 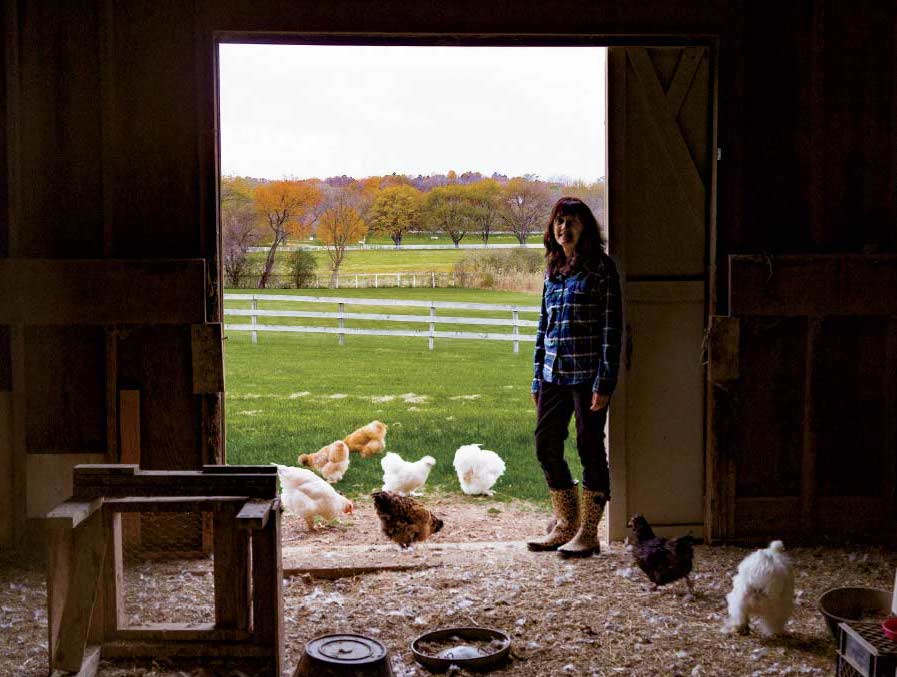 Helen Sheyka and her chickens

“We would all get together and bring an egg dish and talk chickens. It really grew fast,” says Sheyka. The group has more than 100 attendees now from around the North Shore and northwest suburbs.

Online groups such as the Chicago Chicken Enthusiasts are also helpful forums for information and connection, and Murtoff does house calls or phone calls as part of her business.

Part and parcel of the backyard chicken boom, there has been a ramping up of both the whimsical and the practical in chicken accoutrements, coops, and care.

There are chicken toys and chicken harnesses. Chicken swag (jewelry and clothing), and chicken treats with names like “Pecker Wrecker,” “Kitchen Chicken,” and “Meal Worm Frenzy.” And on the pampered pet end of the spectrum, chicken beauty contests and costume competitions have become a thing. One chicken owner even took her ailing chicken to her chiropractor for soothing treatments.

But more beneficial for the long term are the enhancements that come with experience.

With many Chicago area owners now entering their fifth (or more) year of chicken ownership it’s meant an evolution of everything from coops to flocks, as well as more mentorships blossoming as new households add chickens to their back yards.

In Barrington Hills, both Susan Sanfilippo and her sister-in-law Renata Sanfilippo are in the process of enlarging their coops and their flocks. The Sanfilippos are working with their homebuilders to match their coop expansions to the architecture of their homes. Susan’s expansion includes a much larger run for the birds. Renata’s soon-to-come rebuild will enlarge the coop and include a much larger run, as well as a fountain for a growing flock of ducks.

“Backyard chickens isn’t just a trend,” Sheyka concludes. “We’re in this for the long haul.”