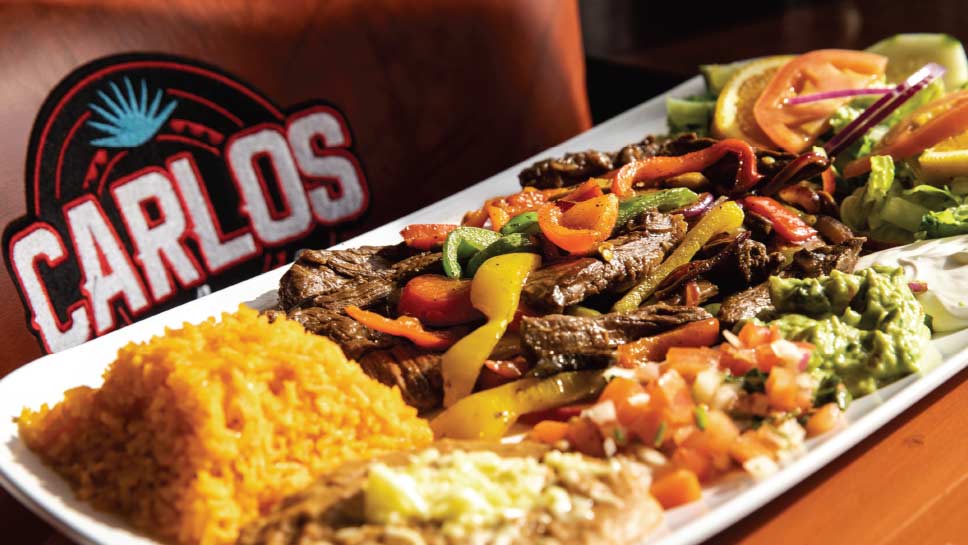 This new entry to the Lake Zurich dining scene brings an air of coastal authenticity to the local Latin dining scene. PHOTOGRAPHY BY ROBIN SUBAR

There are burritos in this world, and then there are the Godzilla-sized burritos that come rolling out of the kitchen at Carlos #4 Mexican Cuisine and Seafood in Lake Zurich. These are some serious wraps served on giant rectangular platters so large that the wait staff can only carry one out at a time, gripping each platter with two hands out of fear that their sheer weight might buckle their wrists.

These burritos come stuffed with the sort of fillings you won’t find at Chipotle—think cochinita pibil or steak and shrimp with mushrooms. Then again, everything on Carlos’ menu has been supersized to otherworldly levels. You can order margaritas the size of a punch bowl. Bubbling hot stews come in cauldron-sized mulcajete. And sprawling fish platters boast so much shellfish they redefine the term “seafood tower.”

Forget the small plate revolution. Carlos’ menu was designed to be the inverse of a graze-and-nibble tapas affair. Instead, it’s a family-style Mexican feast that leans on the same lush color palate as a print by Frida Kahlo or Diego Rivera. Avocado greens. Chipotle reds. Golden mangoes. And deep crusty black chars.

In recent years, a number of restaurants have tried to make a go of the cozy little parcel of land at 500 Ela Road, but none have tried to woo diners in quite the same way as owner Carlos Pulido. With three other Carlos locations already spread across the Chicago area—thus, why Lake Zurich is called #4—Pulido seems intent on ensuring every one of his customers will A) find their favorite Mexican specialty and B) exit knowing they’ve been given their money’s worth of grub. 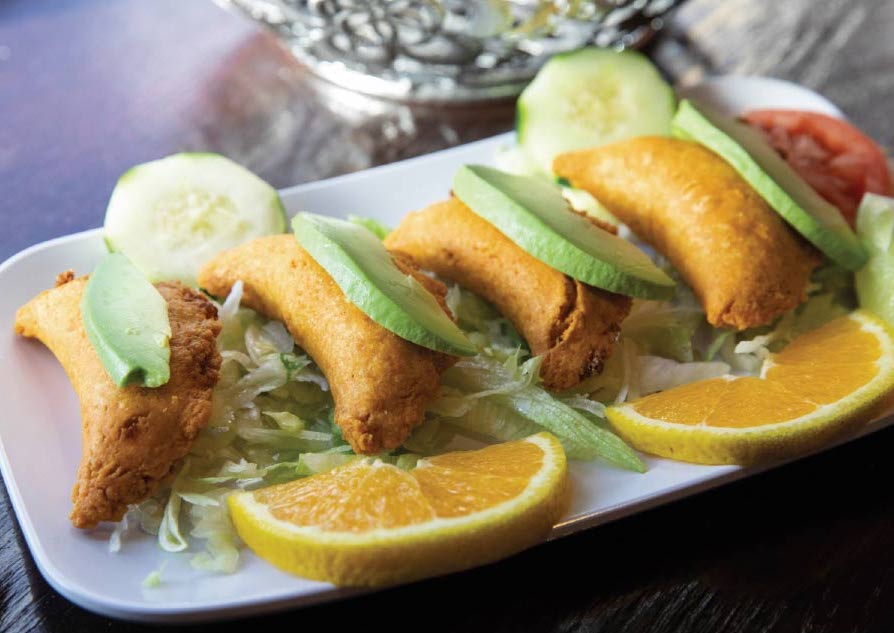 Because everything is cooked fresh, there can be some lag time during busy evenings, but when the food does arrive, it’s worth the wait. A cookbook full of Tex-Mex and traditional Mexican comfort foods have been crammed onto the menu. Tacos. Fajitas. Sopes. Chimichangas. Tortas. Salads. Enchiladas. Tostadas. And that’s just from the first spread of Carlos’ voluminous menu.

The appetizer list, for example, boasts simple, clean and ultra-fresh takes on plenty of classics—including simple but satisfying cheese quesadillas fanned around the house’s ultra-creamy guacamole as well as a hefty empanadas made with a dense and flaky dough. 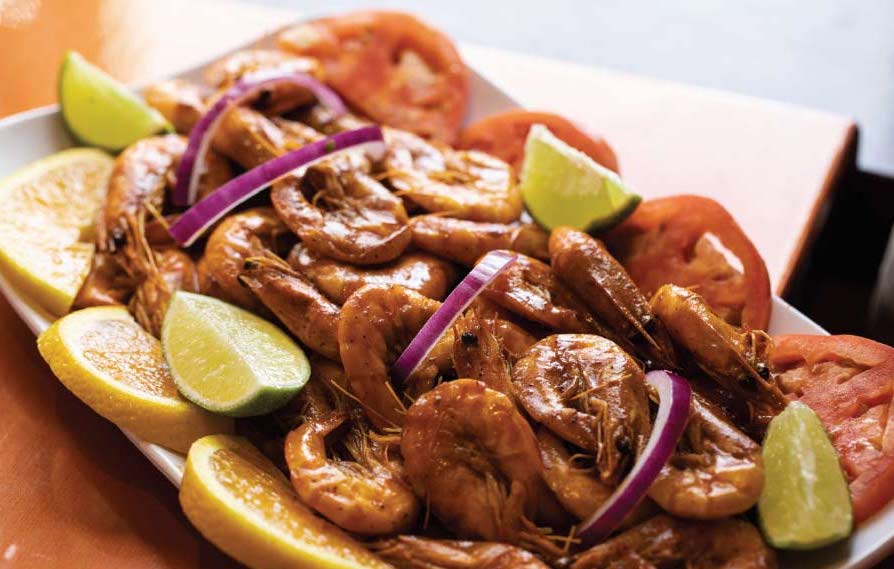 The best of the menu appears to draw its inspiration by the Pacific coast of Mexico. Grilled and steamed seafood filets can be marinated in a number of sauces from a delicious yet mild Veracruz tomato sauce to a complex but spicy garlic guajillo pepper sauce.

But no evening at Carlos would be complete without ordering at least one of the house’s shrimp platters, which come piled high with giant shell-on butterflied shrimp, including the option to dress them in Nayarit’s famous huichol sauce—a vinegary, chile-rich sauce that’s every bit as complex as any mole.

The real surprise, however, may be the quality of Carlos parilladas combo platters, which compile a mélange of calamari, scallops, and other crustaceans on a giant silver platter. After being grilled, the mix is simmered down in a zesty tomato-based sauce, which not only tenderizes the seafood but infuses the same garlic-meets-chili notes you’ll experience in the house’s fine salsa. 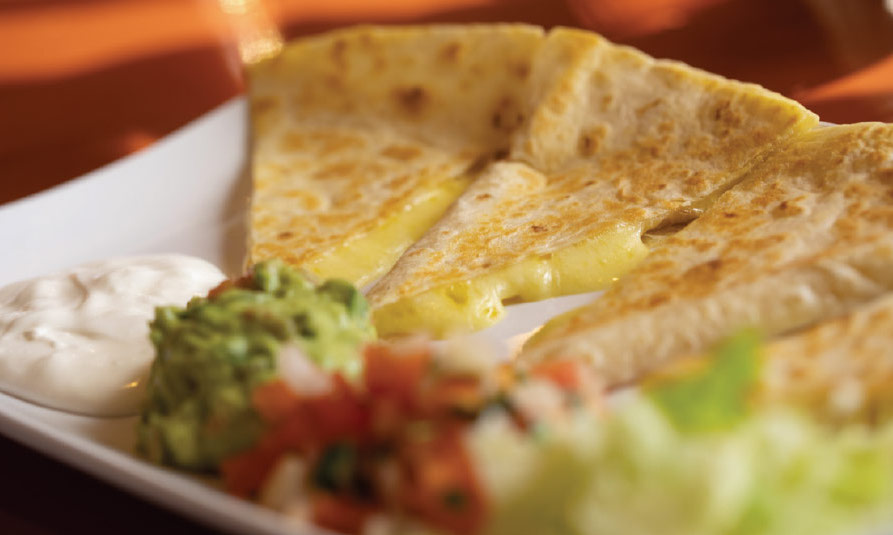 Ditto, in terms of value, for the house fajitas, which are served with a colorful array of yellow, green, and red peppers along with seasoned onions and mushrooms. Each order comes with a spread of Carlos’ smart sides, including beans, rice, pico de gallo, guacamole, and sour cream. And if there’s still room on someone’s platter—unlikely given the size of these dishes—consider the house grilled short-ribs, which are tender and juicy.

Given the sheer size of the menu, it’s impossible to survey even a tenth of it on a single visit, but this much is undeniable: At a time when landlocked Mexican fare has taken center stage, Carlos #4 gives diners a rich—and bountiful—glimpse into the nation’s equally delicious coastal delights.