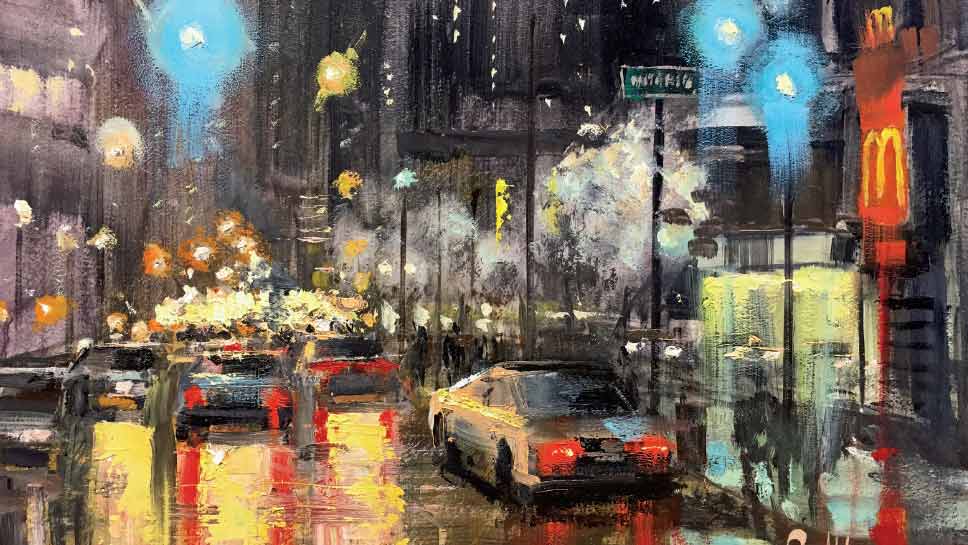 Octogenarian and local fine artist Lee Radtke is just getting started on his bucket list.

Lee Radtke knew at an early age that he loved to draw—a lot. He started out sketching his own imagined cars of the future. Much later in life, he would paint exotic cars, freighter boats, and cityscapes. But first came education and life.

Unlike many would-be artists who go on to practical careers in business or other non-creative fields, Radtke chose an art major while attending high school in the Logan Square neighborhood of Chicago, where his art teacher Mrs. Adams encouraged him. He also took summer classes at the Art Institute of Chicago and then went on to earn a bachelor’s degree in product design at the Institute of Design.

“I liked creative challenges, and all of this was a good background for getting into design,” says Radtke. He parlayed his talent and education into a successful self-employed career in commercial design. “My job was to present to a client what a product was going to look like—from refrigerators to portable radios, anything having to do with manufactured products for the general public—I’ve done them all,” he says. He also did quite a bit of conceptual design for retail stores (about 300 in total) in many of the area’s large malls, sketching and drawing renderings of storefronts and interiors. “I’d give the clients various optional layouts, including detailed drawings of construction and even designing the fixtures.” 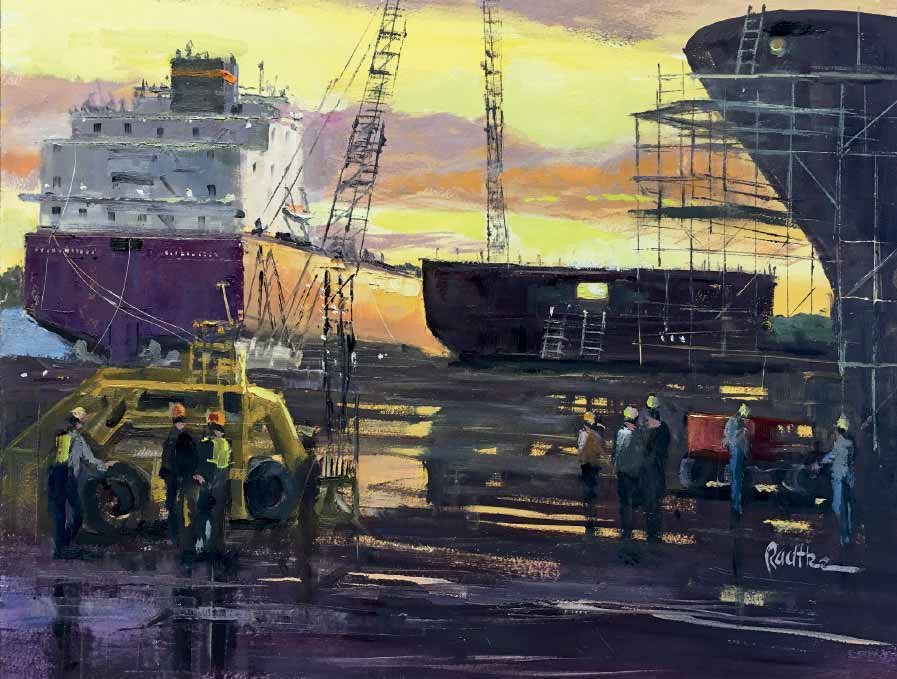 Radtke married his wife Barbara nearly 60 years ago and raised their two children in nearby Lake Zurich, where they’ve lived for 40 years. And, after retiring in 2000, he decided to pursue fine art.

“I started to draw again more seriously and to paint,” he says. “While I never had any training in fine art, it was always on my bucket list. I started out painting with the Plein Air Painters of Chicago, meeting at a different location every Saturday morning. That’s where the passion developed”—along with his knack for and talent in impressionistic oil painting.

“I prefer oil painting because it is very forgiving; you can scrape off or paint over,” Radtke explains. He painted a lot of cityscapes at first, iconic Chicago locations ranging from the Art Institute and Millennial Park to Market Street, Humboldt Park, Bucktown, and Lincoln Park. “But I was not satisfied with one subject matter,” Radtke explains. “I like to try other things and challenge myself.” That’s where the exotic cars and Sturgeon Bay ships come in. 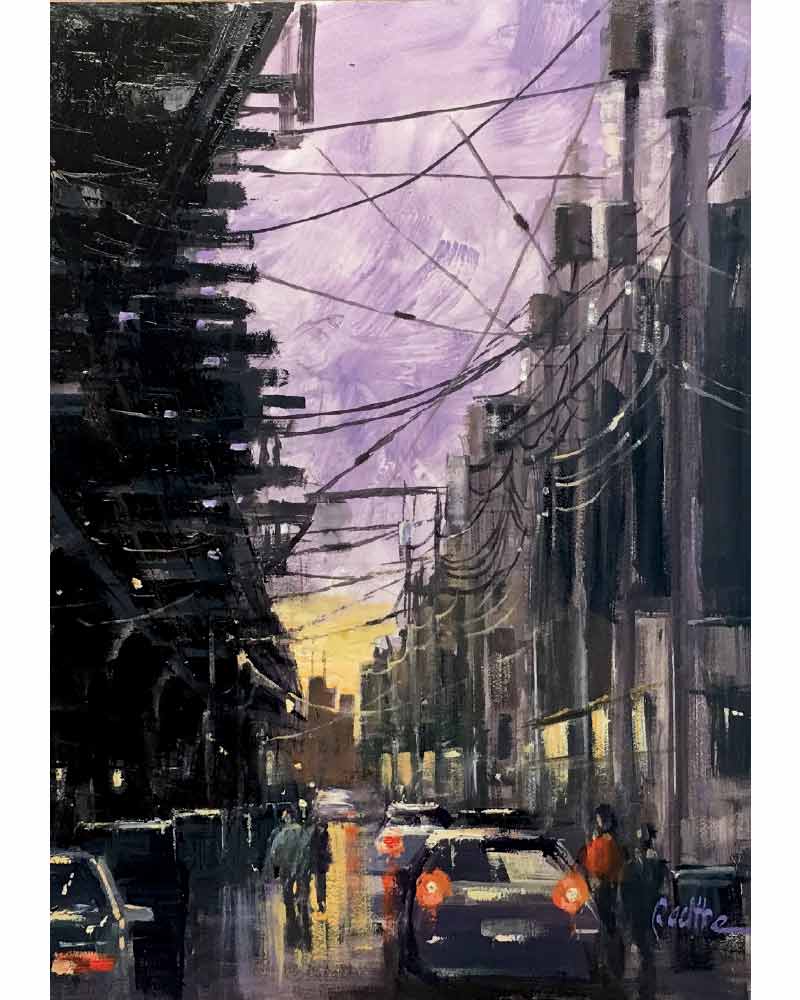 “At a local antique car show, I did paintings on the spot of various antique cars, then I moved on to the more exotic cars, like Lamborghinis and Ferraris, painting a series of car paintings that were displayed in the Midwest Motors showroom for a time.”

He also happened to paint one or two large freighters while up in Door County, then started to do more. “Painting the boats fit my skill and my passion well,” he says. So much so that he went back up to Sturgeon Bay one winter, took pictures of a number of boats that were in dry storage, and created a whole collection of his “big boat” paintings. The series earned him an invitation to show 25 of his lake freighter pieces at an exhibit at the Maritime Museum in Sturgeon Bay, which ran from March through October. Three of these pieces also made it into national shows.” One was with the American Impressionist Society (AIS) last year in Park City, Utah. The next one was at Steamboat Springs with Oil Painters of America that just ended in September; and another is currently on exhibit with the AIS national show show in Fish Creek, Wisconsin, in Door County. Diane Morino from Barrington Cultural Arts Center where Radtke is a member, calls him “one to watch.” 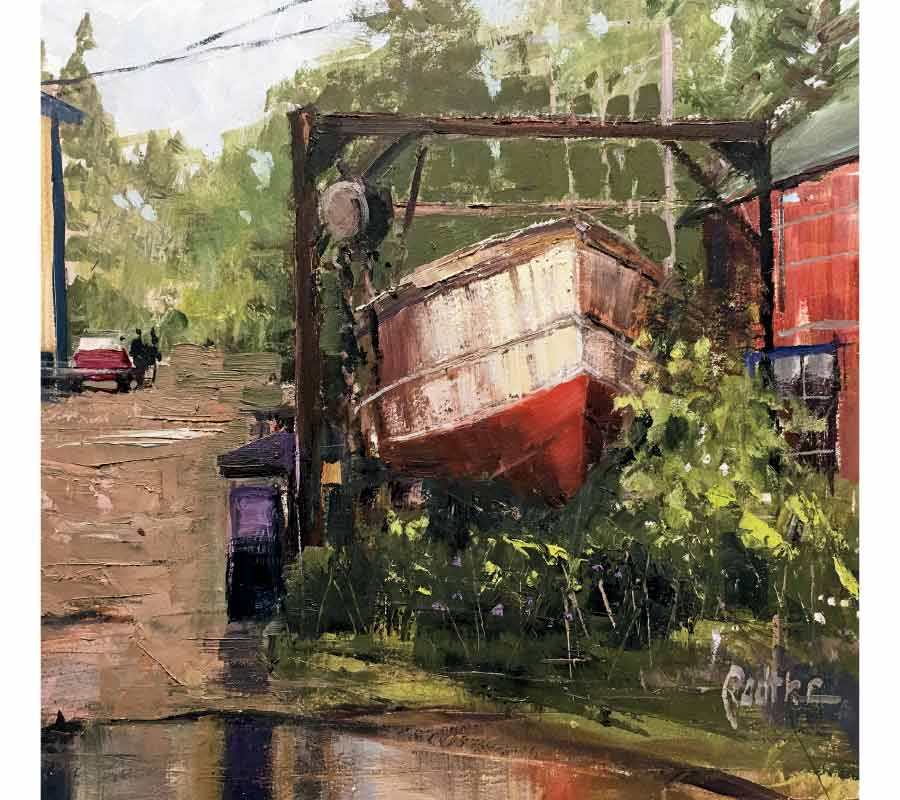 “It’s been an exceptional year,” he says with pride. Radtke is also proud to call himself a member of numerous arts organizations, both local and national: Oil Painters of America; American Impressionist Society; Plein Air Painters of Chicago; Barrington Cultural Arts Center; and Lake County Art League, where he paints “plein air” with the Lake County Art League under the guidance of Chris Tanner who scouts locations such as the Fox River Marina in North Barrington, the Civil War reenactment site in Wauconda, and area forest preserves.

Radtke has shown at numerous other shows including: Art in the Barn, Barrington; Art in the Park; Prairie Crossing Art Fair; 57th Street Art Fair and Old Town Art Fair in Chicago; Art on the Square Lake Forest; OPA Salon Show and Eastern Regional Exhibition of Traditional Oils, both in 2017; and AIS 2017 Small Works Show and the 18th Annual National Juried Exhibition in 2017. He also has many Door County paintings on display at Door Guide Publishing in Sister Bay, Wisconsin. 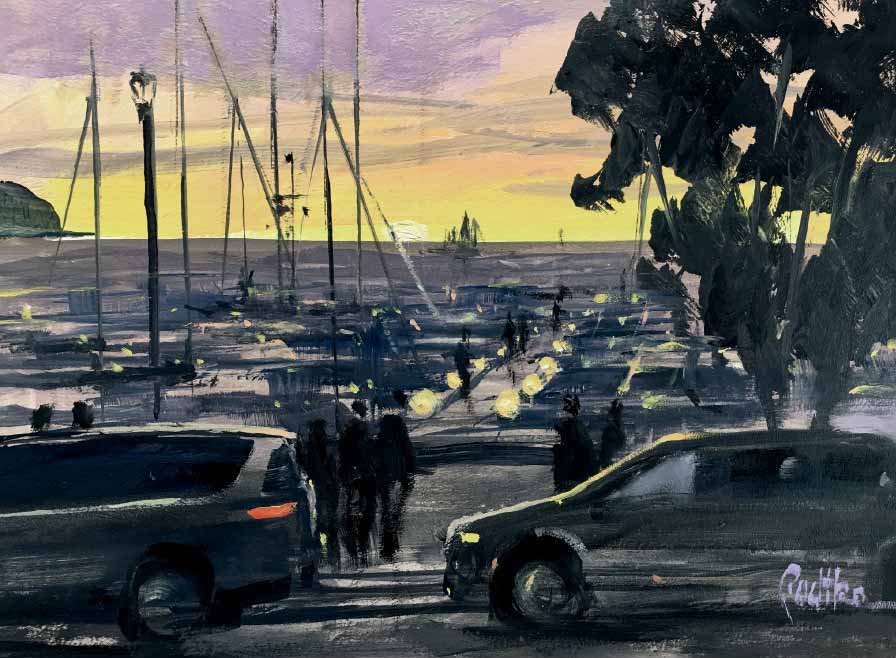 He has also won numerous awards. Most recently, he earned First Place (in the Wet Paint competition) at the 2018 OPA Regional Salon in Traverse City, Michigan in June. He was also named Quick Paint Honorable Mention at Woodstock Plein Air in 2016; 1st Place in the Historic Category at Cedarburg in 2015; and Honorable Mention at Cedarburg 2016, and Best of Show at Art in Nature in 2016, among others. 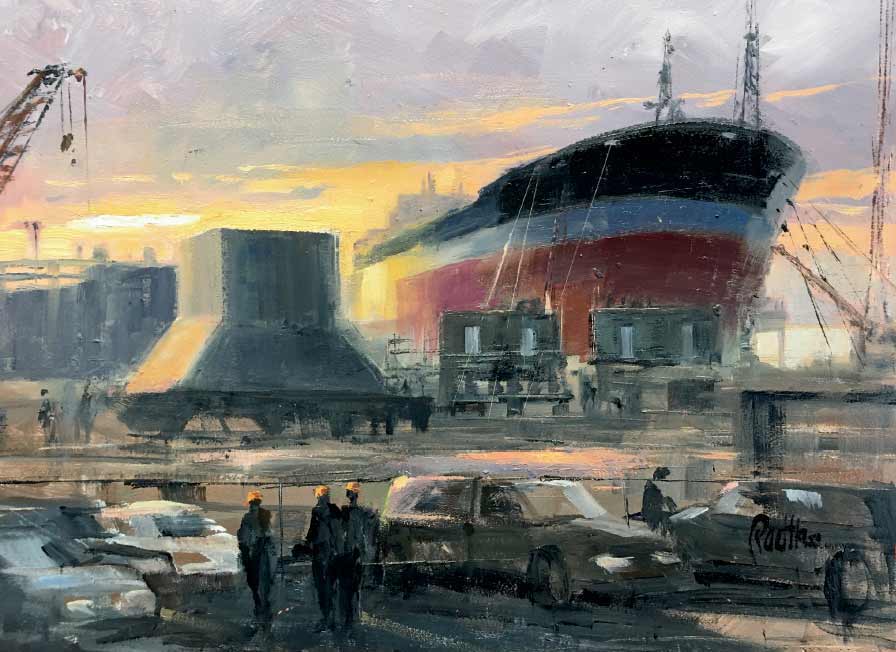 Still, the octogenarian who loves to paint remains modest: “My skill as an oil painter is still evolving, and I learn a lot just by observing and listening and doing. But I am becoming much more confident in what I do.”