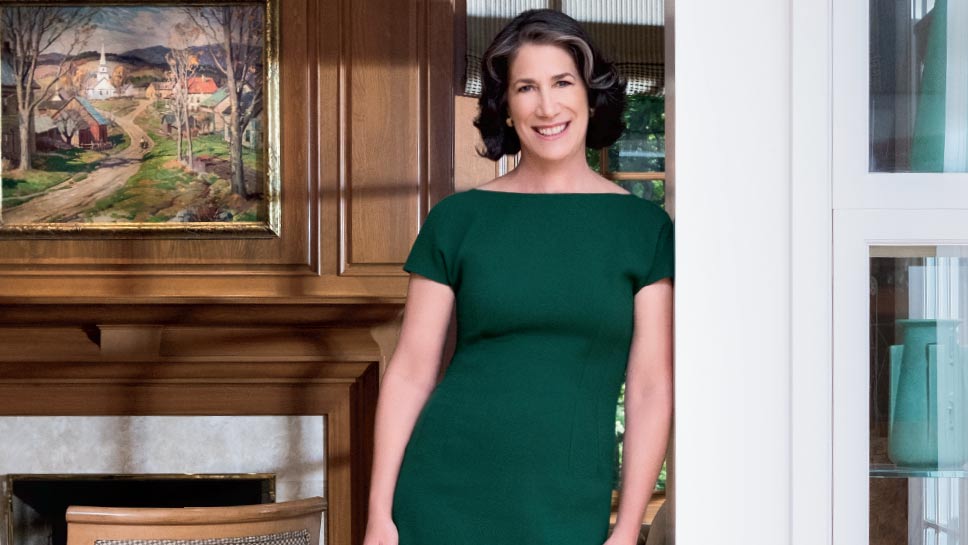 Catching up with Diana Rauner. PHOTOGRAPHY BY FRANK ISHMAN

The 23-year-old Wall Street analyst sits across from a man at a table in a settlement house in New York, circa 1984. The analyst is a Yale University graduate and a first-day volunteer tutor, eager to teach, committed to helping a human’s stock rise. Her tablemate is an ex-offender.

The woman learns the man, also 23, can’t read. “The young men I tutored were working long hours, and they were gracious, quiet, determined,” recalls the analyst, now known as First Lady of Illinois Diana Rauner. “Someone my age, unable to read? That blew my mind. It was a transformative moment for me. You don’t need a Ph.D. to connect the dots between not knowing how to read and becoming involved in the criminal justice system. That experience at the settlement house opened my eyes to the issue of educational inequality, and I knew then that I would find a way to address it.

“I don’t know if I changed the ex-offenders’ lives,” Rauner, a Winnetkan since 1996, adds, “but I know they changed my life.”

Rauner found herself visiting the settlement house for the first time 34 years ago, in part, because of her parents’ enduring enthusiasm for volunteerism. Two-time cancer survivor Laura Mendley, now 86, was a regular volunteer at her New York synagogue during Rauner’s formative years. She continues to help people cope with their breast cancer experiences as a Reach to Recovery volunteer. Mark Mendley, 90, was active in Boy Scouts of America, among other organizations. Volunteering as a financial arbitrator still thrills him.

“My parents,” the 57-year-old Rauner says, “served on school boards, were active PTA participants, loved doing things for others. I watched them serve; I admired them. I still admire them. Who wouldn’t? They’re curious about things, and they still get excited about learning. Isn’t that great? They’re role models for life. They inspired me, in my 20s, to get out there and start volunteering.”

Rauner applied to Stanford University’s business school, writing, “I want to run a nonprofit someday” on her application. She earned her MBA there. “Someday” happened some eight years ago, when Rauner, who holds a Ph.D. in development psychology from the University of Chicago, was named president of Ounce of Prevention Fund, a Chicago-based nonprofit. The mother of six and grandmother of one splits her time at home in Winnetka and at the Illinois Executive Mansion in Springfield and typically works 60 hours per week for the fund. Ounce of Prevention Fund’s mission: Give children in poverty the best chance for success in school and in life by advocating for, and providing, the highest quality and education from birth to age five.

In other words, chip, chip, chip away—in the early going, in this country—at the number of youngsters on track to becoming 23-year-olds who can’t read. Ounce of Prevention Fund set a goal in March to provide access to high-quality care and education to a quarter of U.S. children born into poverty by 2023.

Or 1.3 million children. “That’s a big goal, one that might seem daunting, but we’re going for it,” Rauner says. “It’s a privilege and a pleasure for me to work alongside talented, passionate colleagues on an issue of such great importance to our nation.” Rauner also serves as a life trustee on both Kohl Children’s Museum and National Louis University. She co-chaired the Kohl Children’s capital campaign when the museum—“The place where awesome lives”—moved from Green Bay Road in Wilmette to its current location at Patriot Boulevard in Glenview in 2005.

Another museum she’d like you to visit doubles as a home. Her home, in Springfield. The Illinois Executive Mansion underwent a three-year, $15 million (privately funded, all of it) refurbishment and reopened in July. Governor Bruce Rauner and Rauner lived in it before and after the construction. The mansion, Rauner says, has stories to tell, interesting and moving stories.

“We’re thrilled with the renovation,” Rauner says. “We’d promised people that we would live in and restore the mansion, but honestly, until we went inside [in 2015], we didn’t know how bad its condition was. It was a metaphor for the state of Illinois at the time—if you don’t maintain your roof, water will leak in, and the building will rot all the way to the basement.”

Rauner, a competitive tennis player in high school, reached the pinnacle in another sport at Yale. She took a crash course in fencing, as a freshman, from the school’s highly regarded coach and helped the Bulldogs capture a national championship in her junior season. Rauner served as team captain and earned All-America status in her final season.

Illinois’ First Lady lunges herself—make that, throws herself—into gardening these days, along with piano lessons. Both activities relax her. She resumed tickling the ivories 15 years ago, at Music Institute of Chicago in Winnetka. Music to her ears today includes the sound of a plane landing in New York, home state of her parents. Her New Year’s resolution in January was to visit her mother and father at least once a month. The philanthropist in Illinois hasn’t broken it; her favorite philanthropists in New York have counted on at least 12 get-togethers with their youngest of three children in 2018.

In 2014, shortly after her husband was elected the 42nd Governor of Illinois, the Ounce of Prevention Fund president heard some strong words from her six children. Heartwarming words, too.

“They told me,” Rauner recalls, “Don’t you dare quit your job. We’re as proud of you as we are of Dad.”