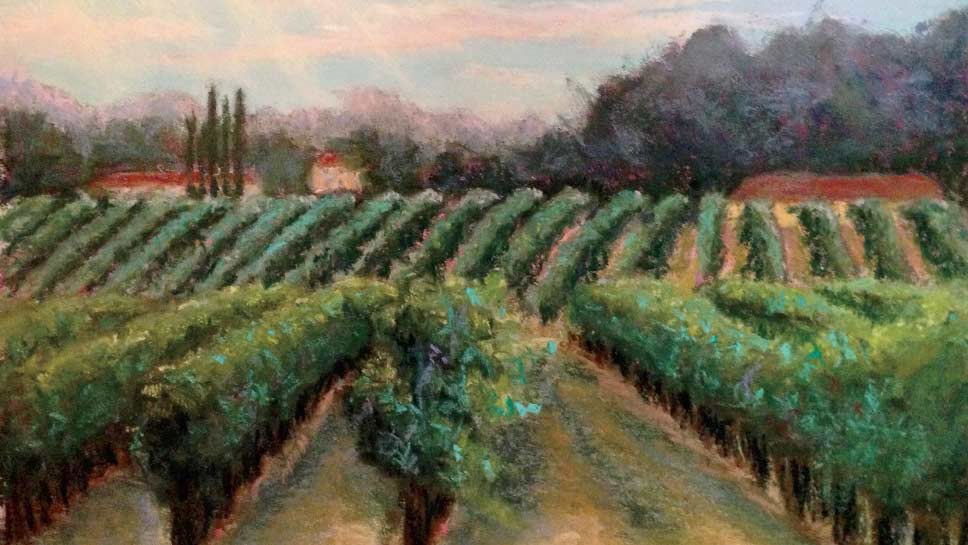 Barrington artist Judy Skulborstad finds her inspiration in the beauty of nature and life. “Cahors Vines,” 12×14, pastel on paper.

When she was in high school, Judy Skulborstad went on a class trip to see a large Renoir exhibition at the Art Institute of Chicago—and her life was forever changed. She already knew she loved creating art, but that day she really “saw” the light and colors that Renoir and other impressionists captured in their paintings.

“It was like taking your first bite of chocolate, or your favorite treat, and thinking, ‘wow!’,” says Skulborstad. “I never paid that much attention to dappled light on surfaces and people before. I loved viewing Claude Monet’s series of hay stacks paintings, among other series of his, which are the same subject or scene painted at different times of the day and seasons, and show how light changes. I was awed and inspired by all of the impressionists’ work.”

For as long as she can remember, Skulborstad has had a passion for drawing, colors, and nature’s beauty, and she began channeling that passion through her paintbrush. “I was part of a big family, and our entertainment was going hiking in the woods,” she explains. “My mother would encourage us to ‘look at the sky, the clouds, the color there, the trees, etcetera.’ It really resonated with me, because I am a visual person, so I started to notice and look.” 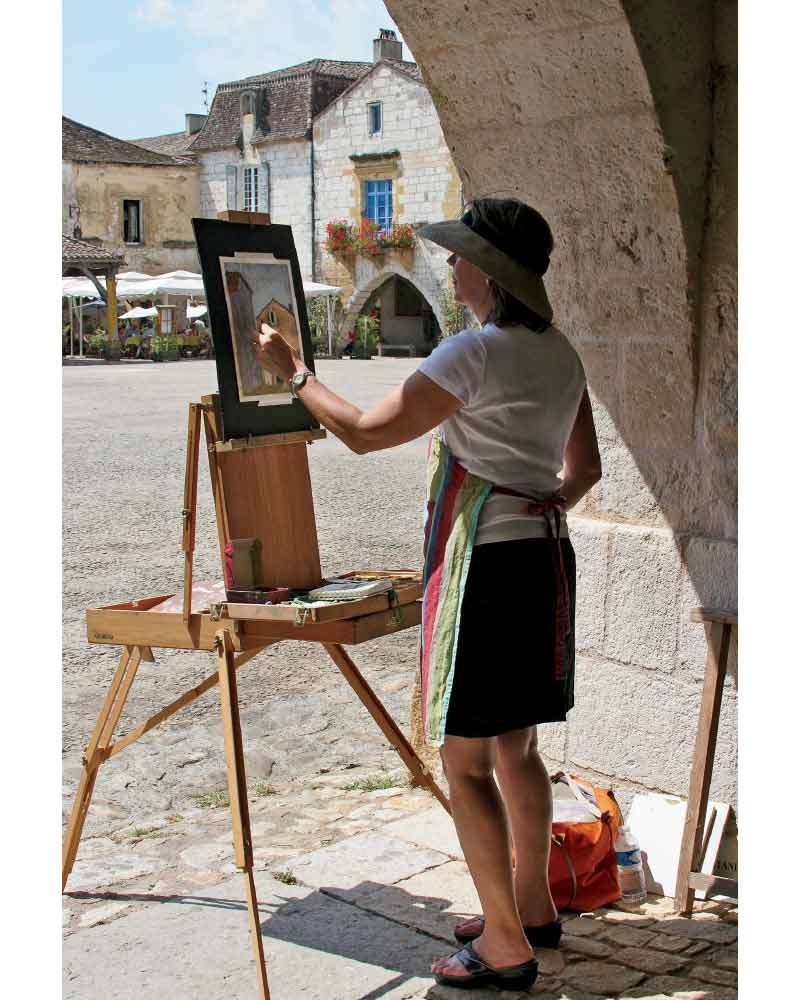 Serendipitously, Skulborstad also attended Rolling Meadows High School, which was new at the time, and happened to have a state-of-the-art art program. “The arts must have been fully funded then,” she laughs. “I jumped in, and the art department exposed me to new things.” In its sky lit classrooms/art studios, Skulborstad was exposed to many different disciplines—sketching, drawing, etching, printmaking, lithography, jewelry making, and painting.

“I was drawing still life at 14,” she says. One of the teachers who made and impression on Skulborstad and helped solidify her artistic aspirations was Bruce Preo. “He was so encouraging and he challenged us! He was the first teacher to tell us that ‘seeing’ and being very keen with observation skills are the most important things to be successful in drawing.” Preo gave Skulborstad and her classmates a lot of opportunities to draw from interesting still life set-ups and models. “He would have student models dress up in funny things like goggles and skis and posing with a trombone,” she says. “I was in class with some amazing students who have been working artists since school.” A high school trip to France (she also took French classes) exposed Skulborstad to another culture and the birthplace of Impressionism, broadened her horizons, and fueled her artistic hunger. “I love France—the architecture, historical places, museums, fields of sunflowers and lavender, vineyards, and small towns.” 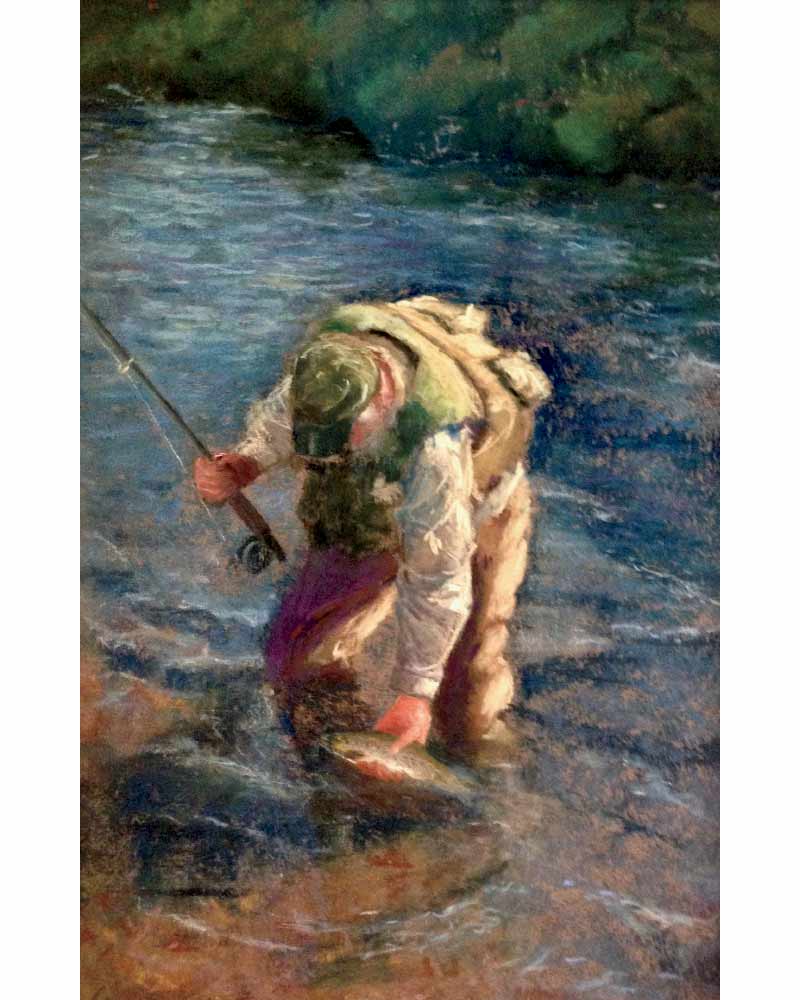 After high school, art took a backseat to pursuing a career in sales and marketing. Fortunately that career took Judy to a job located on Michigan Avenue (with the National Association of Realtors) not too far from the Art Institute of Chicago where she maintained her membership. Her career took her on trips all over the United States but when she was working downtown she made it a point to visit the Art Institute. “I was still visually in touch with the art world. I would go visit my ‘friends’ first, my favorite paintings, and then I’d go see whatever exhibit was happening at the time”, she laughs. “ I still do the same thing now when I visit the Art Institute, and Singer-Sargent, Sorolla, and others have been added to my favorites list. It’s like going to a candy store for me.”

Then came marriage, children, and a move to Barrington Hills 33 years ago. Art would have to wait a bit longer. “We had horses at home. I was riding at the time and our daughter was in Pony Club. I was taking care of the family and the animals.” She dreamed of taking classes at the Art Institute downtown someday. “But then a friend reminded me that we have this little art school right in town,” she says. So she enrolled in a class at Kaleidoscope.

“The first day I did that was like reconnecting with an old friend and picking up where we left off,” she says. “I didn’t even realize how much I missed drawing—to sit down and get so tuned into what you are observing and drawing.” Skulborstad jumped into drawing classes first, then moved into oil painting, sculpture, and pastels—currently her primary focus.” During this time, Skulborstad discovered the “Member Sketch” classes on Saturday mornings in the galleries of the Art Institute, which she took advantage of. 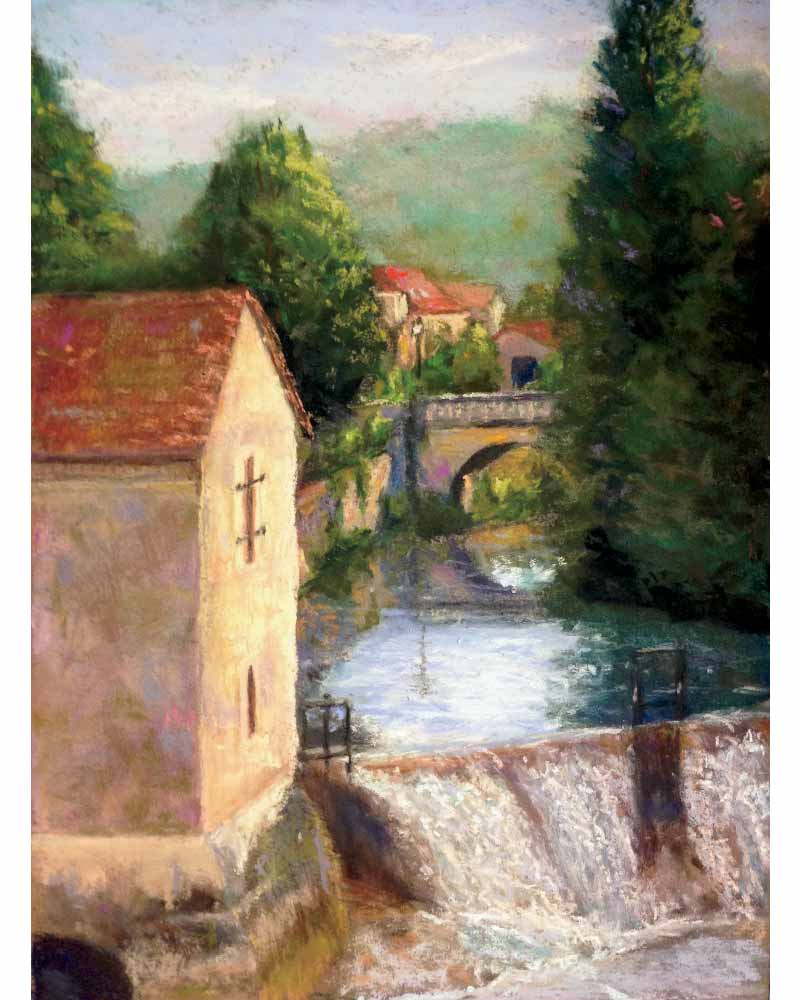 Since then, she has taken several of Master Pastelist and California artist Sally Strand’s “Color of Light” workshops, including one at the Palette & Chisel Academy of Fine Arts in Chicago, and also studies with Chicago artist Kathleen Newman at the Old Town Art Center or outdoors in downtown Chicago. She also has participated in workshops with other master pastelists. Trips to France in 2013 and 2018 to paint with Sally Strand were influential and inspirational to Skulborstad’s work.

Skulborstad has exhibited in many group shows, including one at Palette & Chisel and had her first Solo Exhibition in October 2014 at the historic D.H Burnham Assoc. designed Railway Exchange Building on Michigan Avenue. Her artwork is hanging in the penthouse of that building and in The Barrington Cultural Arts Center Gallery, as well as private collections across the United States. Judy is an associate member of the Pastel Society of America and a member of the Chicago Pastel Painters. She is also a member, and currently co-chair with Barb Ross at the Barrington Cultural Arts Center. 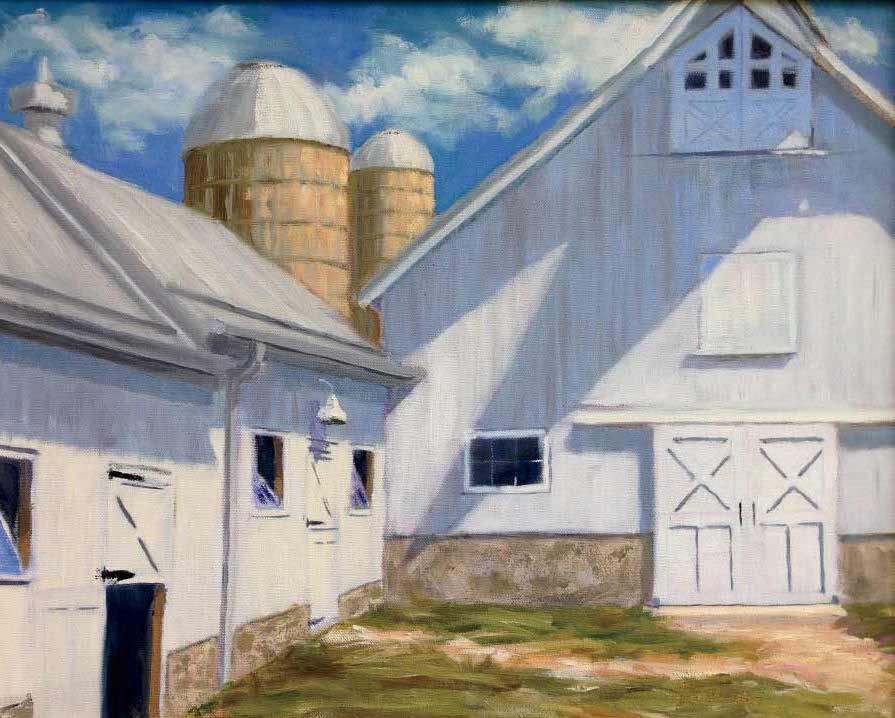 Recently, Skulborstad was invited to participate in Third Thursdays at the Barrington White House with a solo exhibition on November 15. Her future plans and ambitions include traveling to Europe again, perhaps doing more sculpture, and doing a two-person show with Ross.

But what matters most to Skulborstad is this: “In the process of pursuing this passion of translating into a visual language things that inspire and move me, it is so rewarding to have my work resonate with others. Often, when they find a story of theirs in my work, or I create paintings for them from the stories they have shared with me, I realize the importance of art in our lives.”