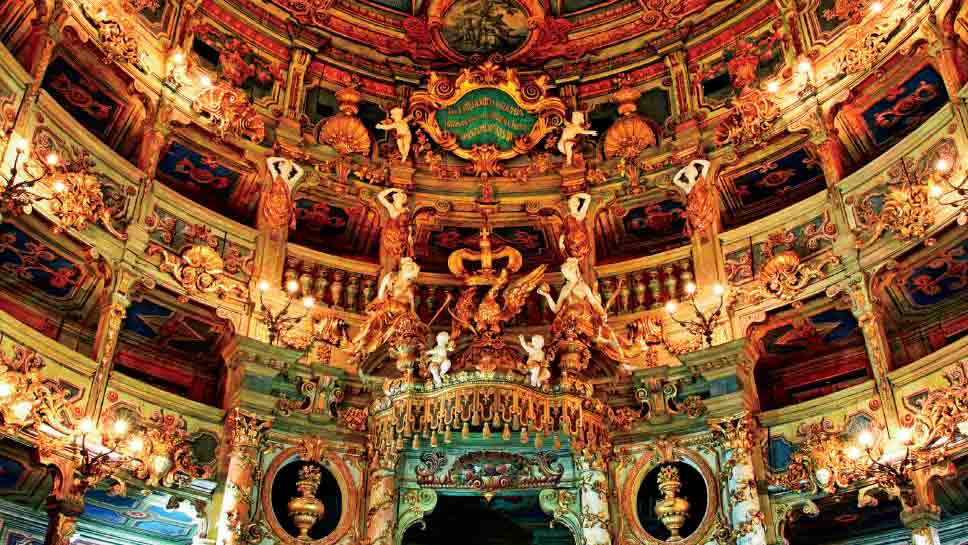 Visit Bayreuth, Germany on a spring or autumn day, and it might seem almost a stage set, waiting for performers to arrive. But come summer, its cobbled streets and market squares—strung with handsome 18th and 19th century buildings—flow with music lovers, Richard Wagner devotees making a pilgrimage to the renowned Bayreuth Festival. Founded in 1876, the festival has welcomed the greatest conductors and singers, from Toscanini, von Karajan, and Barenboim, to Birgit Nilsson, Gwyneth Jones, Johan Botha and Placido Domingo (who conducts this year’s final production, Die Walküre).

First developed in the 12th century, the Bavarian city one experiences today bears the imprint of the Margrave Friedrich of Brandenburg–Bayreuth and his wife Wilhelmine, the sister of Frederick the Great. Although a key administrative center, the town wasn’t much to write home about when the couple arrived in 1735. Margravine Wilhelmine, in particular, set about changing that. One of her finest projects was an intimate opera house, with a restrained facade fashioned by court architect Joseph Saint-Pierre and an explosively Baroque interior created by leading theater designer, Giuseppe Galli Bibiena. Constructed entirely of wood and canvas, the auditorium is a show in itself, a gilt-kissed chamber of garland-wrapped columns, dancing putti, and urn-adorned niches. Interestingly, when Wagner set about realizing his dream of his own theater, he visited the theater, but decided that—lovely as it was—it didn’t quite fit his ambitions. A UNESCO World Heritage Site, the Margravial Opera House recently emerged from a six-year restoration and is open for tours (schloesser.bayern.de).

Although Wagner passed on the Margravial Opera House, he was taken with Bayreuth, and with a grant of land and a financial assist from King Ludwig II (the serial palace-builder most famous for the fairlytale-like Neuschwanstein Castle), he was finally able to realize his long-held dream of a theater designed to accommodate his mighty vision, The Ring of the Nibelung, four myth-driven dramas that stand as the Everest of the operatic canon. 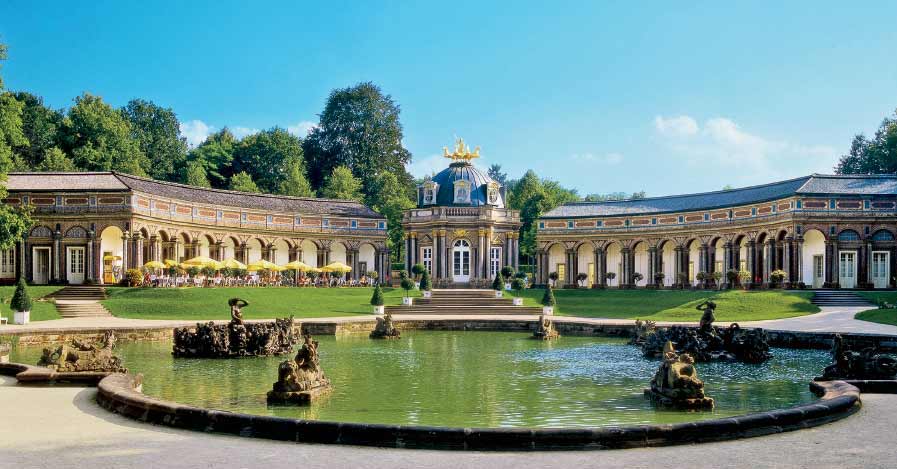 The Hermitage view from the great basin to the Temple of the Sun with the symmetric lateral Arkadenba.

Following, in part, a plan Wagner pinched from architect Gottfried Semper, the Festspielhaus (Festival Hall) features a massively deep stage with an orchestra pit tucked underneath and covered by a hood. The hall is not air-conditioned and because they are unseen by the audience, the musicians forgo the usual tux and gown for T-shirts and shorts. When the curtain falls, they head out immediately to an adjacent canteen to cool down with a drink. In addition to visiting the theater (bayreuther-festspiele.de/en/tickets-service/guided-tours/), die-hard Wagnerians will also want to make a stop at Haus Wahnfried, the Richard Wagner museum, a complex which includes the composer’s residence, galleries showcasing historical costumes and stage designs, and the adjacent home of Wagner’s son Siegfried, where Hitler was entertained (wagnermuseum.de/en).

Bayreuth is no Versailles, but it’s not too shabby in the palace department. Situated in the heart of town, the stately home of Friedrich and Wilhelmine (begun in 1753) comprises not only the imposingly formal rooms one would expect, but some real curiosities, including the walnut paneled Palm Room, with its gilt fronds and dragons flying across the ceiling, and spaces adorned with the over-the-top stucco work of Jean-Baptiste Pedrozzi, extravagant renditions of flowers, leaves, and vines (schloesser.bayern.de). 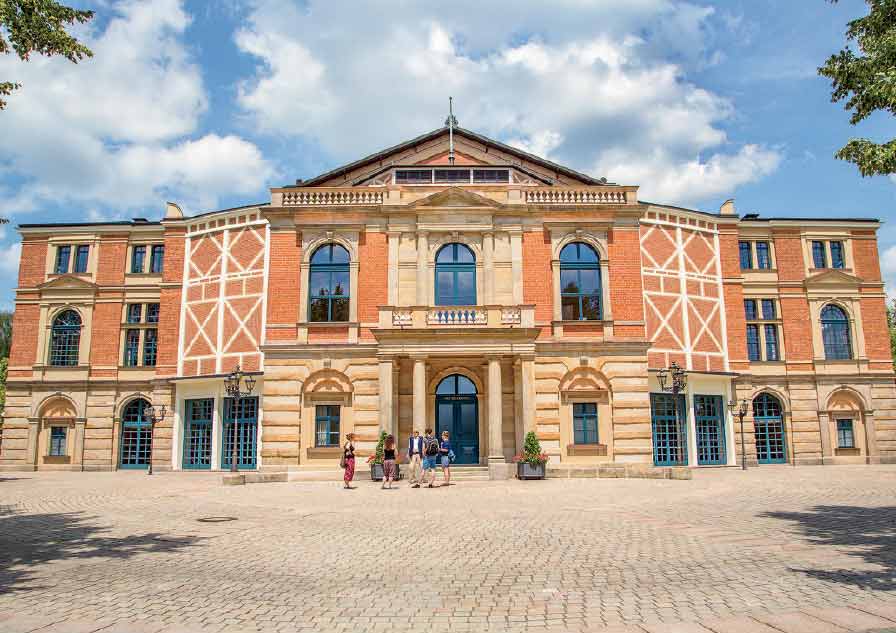 Wilhelmine played a key role in determining the look of the palace. And when it came to the couple’s country digs, she had a hand there, as well. Situated not far from town, the Hermitage had been a princely retreat since 1715. Wilhelmine enhanced the property with a crescent shaped orangery studded with stained glass and quartz and topped with the busts of Roman emperors, an open-air theater built to mimic a Roman ruin, various water features, and extensive gardens (schloesser.bayern.de).

Compact as Bayreuth is, seeing the sites can’t be done on an empty stomach. When hunger strikes, a great daytime destination is the craft brewery and restaurant, Liebesbier (liebesbier.de). Situated in a quiet residential district and exuding a steampunk-meets Mid-century modern vibe, Liebesbier features an enormous U-shaped bar, a relaxed dining room with a loungy nook, and a massive patio. The menu rides on salads, sandwiches, burgers, and steaks. And with 21 offerings on tap and a bottle list that runs to 80 pages, beer lovers will be hard-pressed to go thirsty here. 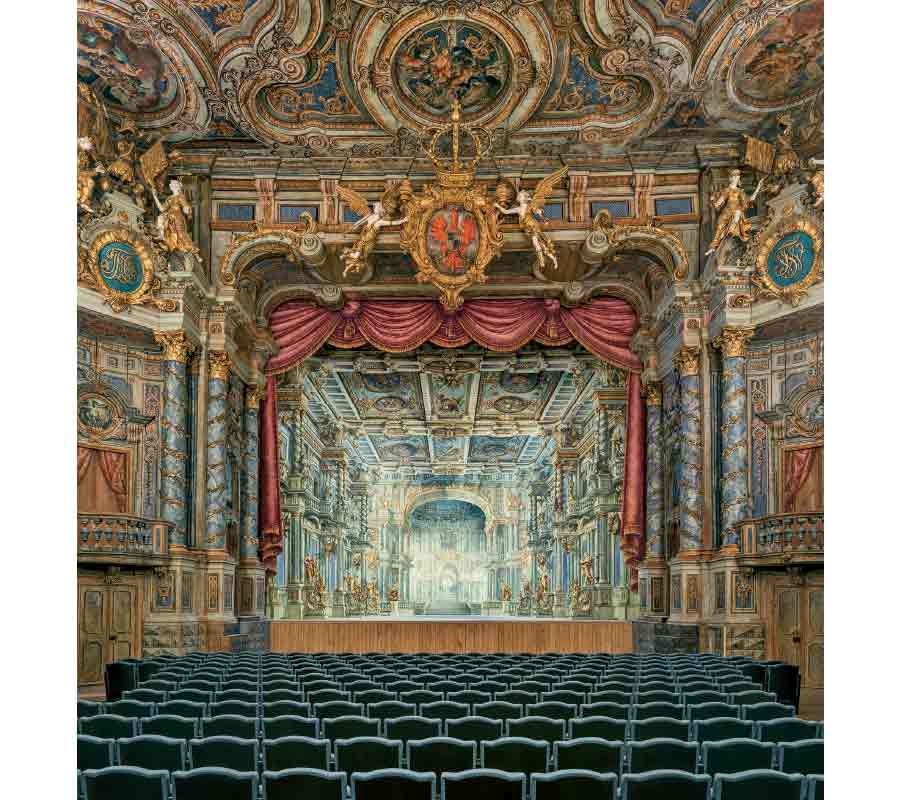 For a taste of traditional food in an old Bayreuth environment, spend an evening at the rustic, candlelit Gaststätte Wolffenzacher (wolffenzacher.de/), where white aproned waiters go to and fro carrying plates of braised beef, dumplings, pork fillet, sauerkraut, and sausages. With its paneled walls, heavy old sideboards, and a rearing wooden horse—ears cocked and eyes bright—this place is, like Bayreuth itself, utterly gemütlich!