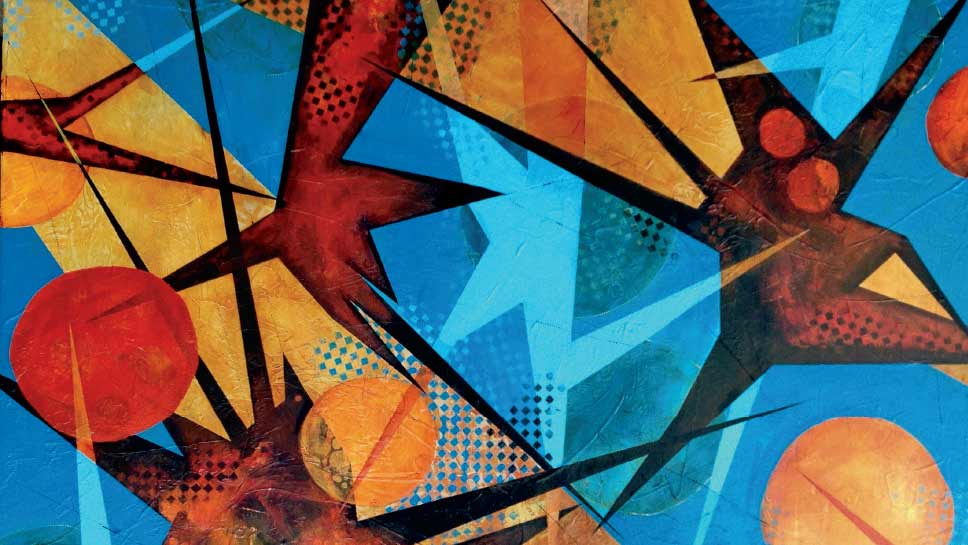 Barb Rydz Ross shares her lifelong and circuitous pursuit of an artistic life.

When she was in fourth grade, Barb Rydz Ross’ teacher, Sister Agnes, asked her to do a very special project—to create, with her drawings, a large banner that would hang across the classroom. While this would be daunting for most fourth graders, Ross sharpened her pencil and got busy drawing.

“Sister Agnes recognized I had some artistic ability,” Ross says, “I was always drawing; I was always ‘that artist’ in the classroom.” For this mural-of-sorts, she started with a big bird on a branch, and as she continued across the banner, it morphed into a farm theme with gardens, animals, trees, and flowers. “I saw things from different angles, and I kept at it always,” she adds.

In high school, she had a special art teacher who worked with a group of students (including Ross), and her interest grew. She went on to study fine art in college even though her father thought she should be a teacher. Ross’ parents were immigrants from Poland (she was born in Belgium) and concentration camp survivors. Her father was trained as a teacher and lived to be 104 years old. Her mother was a seamstress who died at the early age of 47. “Because they were immigrants, they didn’t know the system very well,” explains Ross. “If I had known a little more about what was out there, I would have done commercial art.” 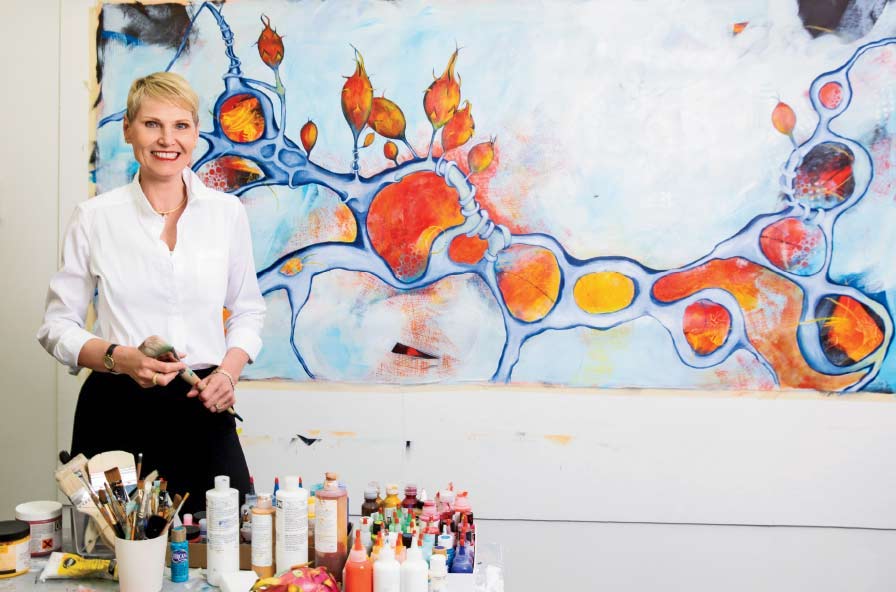 Ross would take a more circuitous route to becoming a full-time artist. After college, she married and had children. Prior to settling down in Barrington in 1991, her family moved around the world for her now ex-husband’s job—New York, London, Hong Kong, Frankfurt, Germany. While these exotic cities inspired her artist’s eye and imagination, when it was time to move again, Ross says, “I decided that the kids were so settled; they loved the schools here and had good friends. Moving had been hard on them. So, we stayed and they flourished here in Barrington.” It should come as no surprise that her children all inherited their mother’s creativity. Daughter Veronica Roth is the young woman who wrote the Divergent series that helped define a young adult genre. Her son Karl is a singer songwriter, and her other daughter, Ingrid, is a photographer.

While she raised her three children as a single mother, though, Ross had to put her pursuit of art on hold while she worked in human resources for 23 years. As soon as her children went to school full time, she enrolled in a class at the Art Institute of Chicago.

“When you start, you try everything,” says Ross. “I thought I needed to develop my drawing skills, so my first class at the Art Institute was drawing,” says Ross. “From there I wanted to learn pastels, and my friend mentioned Kaleidoscope in Barrington, so I enrolled in a pastel class there.” 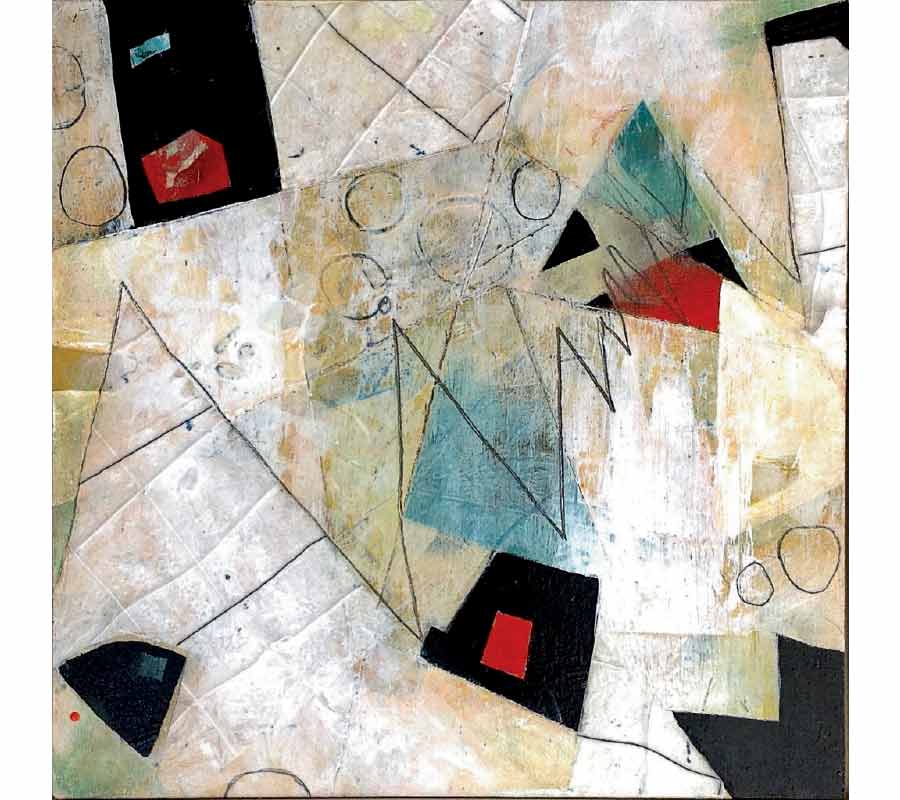 She’d also take some classes at Harper College, enroll in workshops with accomplished artists whenever possible, take a critique class now and then, and do intensive art weeks during the summers before earning her certifications in drawing and painting at the Art Institute. When she eventually remarried, to her current husband Frank, who has a financial consulting business, Ross was finally free to focus on her passion: art.

“My art took off. I was more financially secure and I had more time. And then I did collage,” she recalls. “It was really exciting. I became a pack rat, collecting brown paper bags, newspapers, magazines. I’d go to garage sales and find things there.” She eventually moved on to acrylic painting, but she still incorporates collage into her large-scale works. And by large, she means really large. Ross is currently working on 107-inch abstract paintings, which require (on average) ten different layers of paint.

“First I start on the floor, and throw paint right away. I cover the whole white canvas with paint, let it dry, and then hang it on the wall,” she says. As she adds more layers of paint, she might leave some of the original paint visible through the layers. She might glue some papers for texture and pattern (the collage aspect). “A piece this size takes about three months to complete. My current project is a mess, but it will come together,” she laughs.

Fortuitously, she didn’t graduate to the larger paintings until after she and her husband had built her art studio (with skylights for the best light) on their Barrington property. “I used to paint in my kitchen and clean up every night,” she remembers. But now, her life lends itself perfectly to pursuing her artistic passion. “I spend some time on the computer, walk around Honey Lake every day for my meditation time in the morning, and then go into the studio. So much of my work has come from my morning walk. I don’t always have an idea in my head when I start a project. I work intuitively and things evolve. I love things other people might not think are beautiful, like thorns and spikes.” Ross also visits art museums all over the world for inspiration whenever she travels. 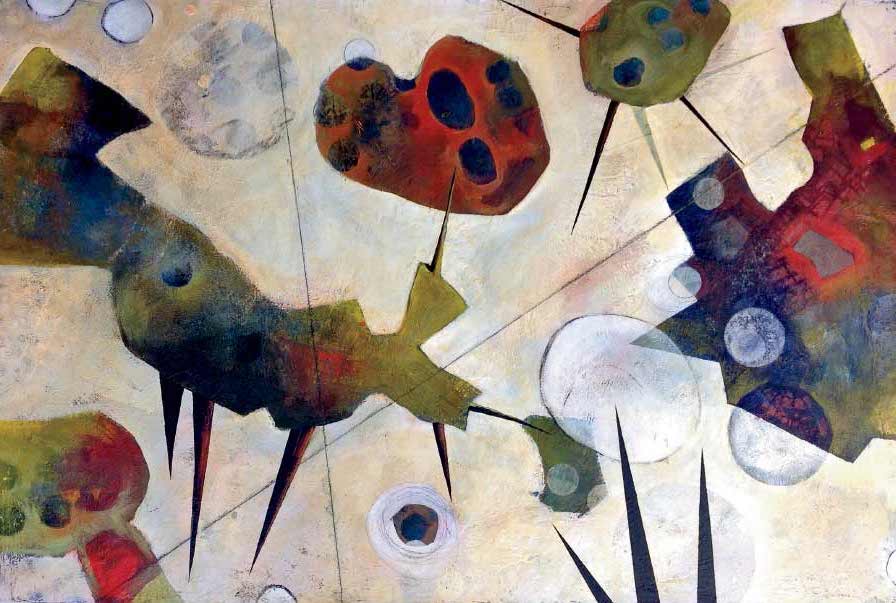 Outside the home and her art studio, Ross stays involved in the local art community. She’s been an active member of Barrington Cultural Arts Center for some time, recently assuming the role of co-chair. “We started a whole community thing at BCAC, growing from a very small organization to 46 members. We’d like to take the organization to another level, to help those with special needs, go into schools and senior living homes and bring art to them.”

Ultimately, while the artistic process is a solitary one, Ross says, “The thing about artists is that you have to have a place to show your work.” Ross has exhibited in Chicago at the Merchandise Mart, at the School of the Art Institute of Chicago, and in New York City at the Jacob Javits Center. Her work can also be viewed on the website of Xanadu Gallery (xanadugallery.com). Four of her larger acrylic paintings are permanently hung in the lobby of One Arlington Plaza in Arlington Heights. One of her collage paintings appears in the book, Incite 2 Color Passions the Best of Mixed Media. She participates in the rotating art exhibits at the Ice House Mall and BCAC’s satellite galleries, and is working with Judy Skulborstad on putting together a two-person show in Barrington. Ross has been actively involved in the annual Barrington Art Festival over the years, as well, both as an artist and a judge.

“I work abstractly, intuitively, with an overpowering need for balance and connection,” says Ross. “Art calls to me every day.”