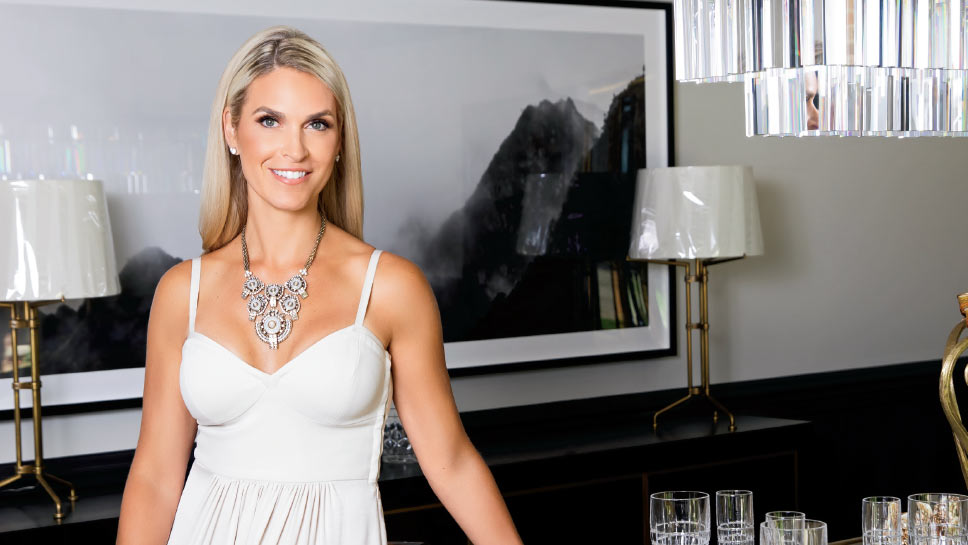 Lisa DiMucci of Barrington talks frankly about losing her husband Sal and her mission to raise awareness of the danger and effects of brain trauma in athletes. PHOTOGRAPHY BY ROBIN SUBAR

Just over two years ago, Lisa DiMucci got the news that no wife or mother is ever prepared for. Her husband Sal had been in a car accident that would prove fatal. He was 35 years old; Lisa was pregnant with their second son. For several years prior, he had been telling his wife that there was something not quite right with him—caused by years of playing tackle football. But there were no tests to diagnosis or prove this.

Two years after his death, there is no longer any doubt in Lisa’s mind. A post-mortem examination of Sal’s brain by Boston University’s Chronic Traumatic Encephalopathy (CTE) Center confirmed that he did indeed have Stage 1 CTE—a degenerative brain disease found in athletes, military veterans, and others with a history of repetitive brain trauma. Sal started playing tackle football with the Barrington Broncos when he was 8 years old. He excelled in the sport, playing through high school at Loyola Academy and earning a full-ride on a football scholarship to the University of Wisconsin.

Now, as an advocate helping to raise awareness of the dangers of CTE, Lisa sits on the Family Advisory Board of the Concussion Legacy Foundation—a nonprofit organization raising awareness about the very real dangers of contact sports to give people the knowledge to make informed decisions as well as provide some hope to those who have lost loved ones. On its website, she shares (in her own words) her highly personal, and alarming account of the years leading to Sal’s death. We’ve excerpted some of her story here:

Sal DiMucci during his football years

I met Sal in 2008, when he was 27. I was in medical school and he was contemplating sitting for the LSAT and applying for law school. As our relationship continued, he started to tell me that he felt like something was wrong with his brain. He would also say he felt like he was going to die young. I heard him, but I didn’t really listen until much later. I just thought he felt that way because he’d lost his own father to a heart attack when he was only 16. And neither of us knew enough about brain injuries, let alone CTE, to understand what might be going on with him. We dated off and on until we finished professional school, and he was still functioning at a high level. High enough to finish law school and to work in an important role at his family business. When we married in 2013 and had a baby on the way, Sal became more serious than ever about his suspicion that he had brain damage. Sal told me something was wrong with his memory and concentration, and I could see that he was struggling with his moods and behavior. He read everything that he could get his hands on about brain trauma associated with football, but he had come to rely on ADHD medication to concentrate. He hated that he had to take Adderall to accomplish simple tasks, but by that point he needed it get anything done.

Sal’s symptoms gradually got worse. His moods swung high and low, almost like bipolar disorder. He struggled more with substance abuse issues as time went on. I couldn’t understand the changes, or why one minute he would be normal and then the next he’d be depressed and getting wasted, seemingly without reason. “I think better,” I remember hearing him explain. In the moment, while I was trying to raise a baby, manage a household, and deal with this man who would be fine sometimes and then completely off at other times, I was not able to process all the changes. But in hindsight, his words make more sense. Sal knew his brain was damaged, and he was trying to cope.

In the eight years that I’d known Sal he was never the type to drink and drive, but the toxicology report later confirmed that Sal was over the legal limit. Sal was driving home from dinner when he struck a tree and was thrown from the car; his two acquaintances walked away with minor injuries. I couldn’t make sense of the accident, or his risky behavior. I still can’t. Not completely.

Thinking back now, Lisa remembers Sal doing research and making her promise to donate his brain to Boston University—someday. “He wanted and needed me to know,” she recalls. “I didn’t fully understand why it meant so much to him.” Now, armed with Sal’s diagnosis and additional knowledge she has gained through her advocacy work, Lisa is convinced that, “Sal’s struggle was real.”

As a single mother with two young sons (ages 22 months and 4 years) still trying to cope with her own loss, Lisa has also become an advocate for legislation to protect young children from the dangers of contact sports. In March, she traveled to Springfield to join a group of people advocating for passage of the Dave Duersen Act (House Bill 4341), which would prohibit any child under 12 from participating in organized tackle football. Athletes who begin playing contact sports at younger ages are at greater risk for CTE. Several published studies show that exposure to head impacts before age 12 is associated with worse outcomes than starting after age 12. If passed into law, Illinois become the first state to ban organized tackle football at the youth level. Proponents of the bill argue that fewer years of tackle football will lower the risk of CTE later in life.

Duerson’s family has put its support behind the bill since the two-time Super Bowl winner (he played for the Chicago Bears from 1983–1989) committed suicide in 2011. His death was later linked with CTE after he left a note asking that his brain be studied by researchers; it was determined that he also had CTE.

Others in the group that day included Tregg Duerson, son of Dave Duerson; Boston University CTE researcher Dr. Robert Stern; former San Francisco 49ers linebacker Chris Borland; Concussion Legacy Foundation CEO Chris Nowinski; and Liz Nicholson Sullivan, wife of Gerry Sullivan. The former NFL offensive lineman started playing football when he was 8 years old, played eight seasons with the Cleveland Browns until he was in his 30s. He now suffers from dementia and shows all of the signs that come along with the degenerative brain disease CTE. 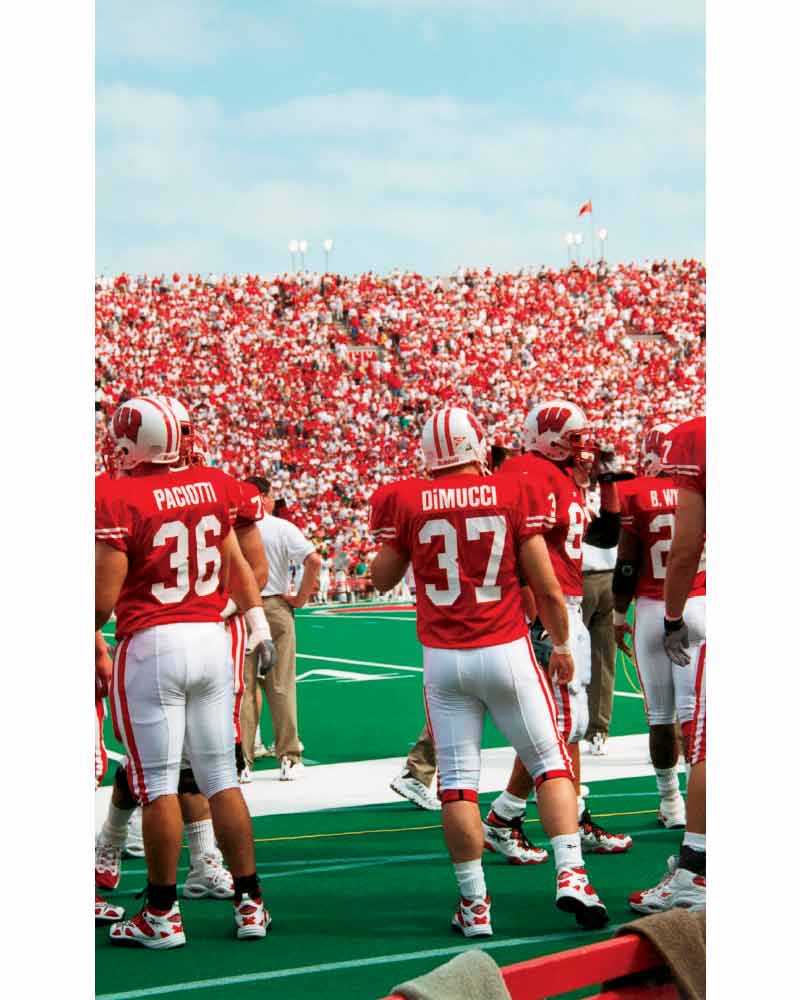 But progress is being made—slowly. “We did pass the bill out of the mental health committee on an 11-9 vote,” says Lisa. “We were successful on the first attempt to get it moving.” The Dave Duerson measure now heads to the House for a full debate and vote.

The controversial 2015 movie, Concussion, brought the issue to the big screen. Hall of Fame quarterback Brett Favre publicly announced on Megyn Kelly Today in April that he is an advocate for concussion research in sports. He has been quoted as saying, “You have to believe that every time a kid is tackled … that he or she is doing detrimental things to his or her brain that may be irreversible. That is really scary.” BU’s CTE Center continues to make strides, conducting state-of-the-art research on CTE, including its neuropathology and pathogenesis, clinical presentation, genetics and other risk factors, biomarkers, methods of detection during life, and methods of prevention and treatment.

Lisa hopes that others won’t have to suffer like her family has. “I’m in the process of editing a book I’ve been writing, called Head to Heart, because I really want to inform people how detrimental this condition is,” she says. “I don’t know where it’s going to take me, but the way I look at it, I am continuing Sal’s legacy and the work he was trying to do to bring this disease to peoples’ attention. He gave me the tools. He made me promise to have his brain donated. And I feel like I’m still with him when I talk or write about it.”