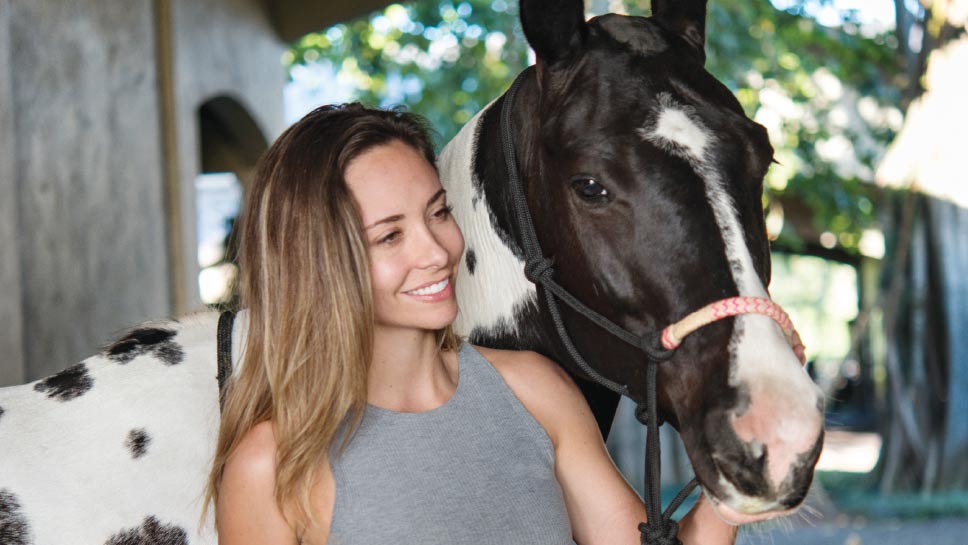 In the first of a new regular column in Country magazine, Wynstone native and polo player Pamela Flanagan extends her passion for horses to help those who need it the most. She shares the story of how Stella became a part of her family. PHOTOGRAPHY BY IRINA KAZARIDI

Mahatma Gandhi once said that we should “be the change that (we) wish to see in the world.” For me, a lifelong equestrian and polo player, the change I wish to see comes in the form of the three R’s—rescuing, rehabilitating, and repurposing horses in danger.

It’s a journey that started in October 2016 with an online ad and an adorably awkward paint pony.

She was designated as “lot #743.” Young and allegedly sound, I knew that hidden beneath her mud-spattered exterior was a flashy little filly. When I saw that she was listed for only a couple hundred dollars, I called the number on the ad to find out more. I learned she was listed at just above her meat price of $0.50/pound.

It was a heartbreaking reminder of a reality in horse culture that we don’t hear enough about. Nearly 150,000 U.S. horses are sent to slaughter every year to be processed and sold for human consumption. Old, young, injured, sound; this statistic from the ASPCA carries no requirements. The USDA documented that 92.3 percent of horses sent to slaughter are in good condition and able to live out a productive life.

After learning of this little filly’s grim fate, I quickly made her the newest member of the Flanagan clan. She was no longer just a number; she was part of the family and, as such, she needed a proper name. Her markings closely resembled those of her newly acquired “sister”—a black and white boxer named Bella, and thus we named her Stella.

Stella’s start in life may have not been perfect, but she now has a bright future ahead. When I rescued Stella, she was 3 years old and slightly underweight, but to me, she was perfect. She had little experience, and lacked almost all basic skills, but none of that was a concern. What I valued was her sweet demeanor, her playful spirit, and our immediate bond.

After purchasing her, she was sent to a quarantine facility to regain her health, and to protect her future pasture mates from any illnesses she may have been exposed to while in the kill pen. After nearly three weeks in quarantine and a clean bill of health, Stella was sent to a pasture in Texas to rest, relax, and to spend the next three months getting fat and happy.

In mid-February 2017, Stella spent 30 days with Joshua Hill, a friend and expert horse trainer who believes the best thing for a horse is a soft hand and a strong connection. By mid-March I had her shipped to Chicago where we began our journey together. We spent most of March and April riding in the arena—working on basic skills such as leg yielding, backing up, responding to the seat, cantering from a halt, lead changes; at the end of each session, I would do my best to desensitize her to various stimuli.

My goal was to have a well-rounded, bomb-proof pony. Soon enough, she was stick and balling in the arena. By June, she began stick and balling on the outdoor field and played in several green horse chukkers. In an effort to continue her desensitization training, I would often introduce her to new situations—tarps, loud music in the arena, and a pack of playful pups joining us during stick and ball work and trail rides.

Stella played her first tournament game last August 13, a Women vs. Men’s Tournament held at Arranmore Farm & Polo Club. There were more than 200 people, with tents, music, and even flying Lipazzans. She performed better than I could have ever expected and won honorable mention for best playing pony.

Stella’s story and her continuing progress has helped me not only advocate for repurposing unwanted horses, but more importantly she has helped me to lead by example. This year alone I have rescued six horses, all with different stories, but all originally bound for the same unfortunate fate. All six of my rescues have turned out to be sweet, young, sound horses and I am grateful to have them in my life.

This cause is now my passion, and I am determined to spread the word to get others involved. There are many ways to make a positive impact, even if you’re not able to rescue, rehabilitate, and repurpose a pony in need.

One alternative is to get involved with an established rescue organization. There are several rescue organizations around the country focused on taking in neglected horses and retiring older horses. Supporting a rescue by volunteering, fostering, or “sponsoring” one of their horses is an incredibly honorable and meaningful way to give back. It is a great option for those who want to help, but may not have the time, resources, or experience to have a horse of their own.

Those who do have horses can help by remembering to care for them into their old age. The only situation more heartbreaking than seeing a horse in need of rescue is seeing one of your own horses in need of rescue. It is essential to have a plan for their retirement. If they are turned out somewhere, check in on them periodically. Be careful giving your horse away to people claiming to have a good home; often this is how older horses enter the slaughter pipeline.

To protect any of my rescue horses from falling into the wrong hands again, I mark them with a special freeze brand that symbolizes my mantra—to “rescue, rehab, and repurpose.” I do not want to hide the fact that these horses are rescued horses that came from bad situations. Instead, I want people to see that these formerly unwanted horses have been repurposed and to recognize the great potential that lies within these muddied misfits.

My goal over the past year has been to bring awareness to the thousands of horses in need—to do away with the stigmas suggesting they are all old, injured, or crazy, and to promote rescuing, rehabilitating and ultimately repurposing discarded horses. Stella has helped me to not only work on attaining my goals, but to do so by leading by example.

For a long time, my polo related goals were to better my skills and to play all over the world. After rescuing Stella, my goals have expanded. I hope to continue playing polo, but to also give back to the equine athletes that make this sport possible. Stella, the once skinny little mud-spattered filly sparked something inside of me, and I will forever be grateful for the impact she has had on my life and my equine aspirations.

Ask any polo player what their favorite part of polo is, almost all will respond, “the horses.” Horses have been good to us so it is important to return the favor. Be a voice for those who don’t have one.

Anyone interested in getting involved in horse rescue is encouraged to contact Pamela directly at [email protected] You can also see and follow the stories of all her rescue ponies on her Instagram account, @pamela_alina. For more about Irina Kazaridi’s equestrian photography, visit irinakazaridi.com.