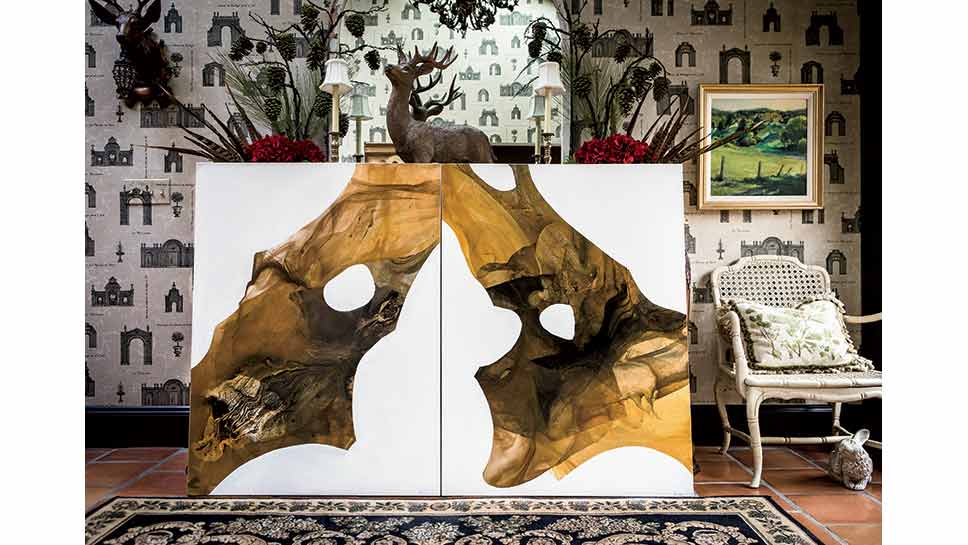 More than two decades ago, a six-year-old named Eva Carlini walked into a paint-strewn workshop at the Kaleidoscope School of Fine Art in Barrington hoping to get messy. She wanted to get her hands dirty—to press a brush against a canvass until the paint clumped into tiny mounds of pure color. And she yearned to hold a piece of earth in her hand—wet slippery clay—and spin it around until it hardened into something solid, with both dimensionality and volume.

None of her art teachers at Kaleidoscope ever told her what not to do, only that she should listen to the creativity inside that little heart of hers and unshackle it for all the world to see.

Which may be why Eva Carlini, who now has commissioned paintings and sculptures across Chicago, made her return to Kaleidoscope late last month for a pop-op exhibit that includes at least six of her pieces and the debut of a new sculpture.

Anyone familiar with the lush landscapes that carpet and flow around Barrington will see traces of home in Carlini’s works, which are as bumpy, multidimensional, and ridged as a topographical map.

Eva Carlini’s “Sound” acrylic on canvas painting is on display at her parents’ Barrington Hills home with family dog, Flower.

They’re meant to express dimensionality, as often a dozen or more layers of paint are applied to her canvases as well as the occasional smear of plaster and spackling. The results capture some of the mysteries of nature, especially the dynamic interplay between earth, wind, and water.

Look at Carlini’s piece Gold Horse and you can see the mix of amber and stone, as well as the multitude of layers that sheath the canvas. Paint was splashed. Watered down acrylics were run. And the canvas was flipped around, until a shape both irregular and distinctly natural appeared.

Carlini says her style stems in part from her childhood, when she’d spend hours playing imagination with her sister, Diana. They’d run and study and then create anew, transforming what Mother Nature laid down around them into a personal fantasy of what they wished it to be.

“I think what draws me to painting and sculpting is the amount of control it gives me,” says Carlini. “It’s a blank slate, so I don’t plan it. I want to capture what I feel at the spot, which is very peaceful for me.”

Consider one of Carlini’s other pieces, a stark black and ghostly white piece called Doves, and you’ll see that control. It took her a full year— as well as 20 to 30 layers of paint—to re-create the precise texture she was looking for. 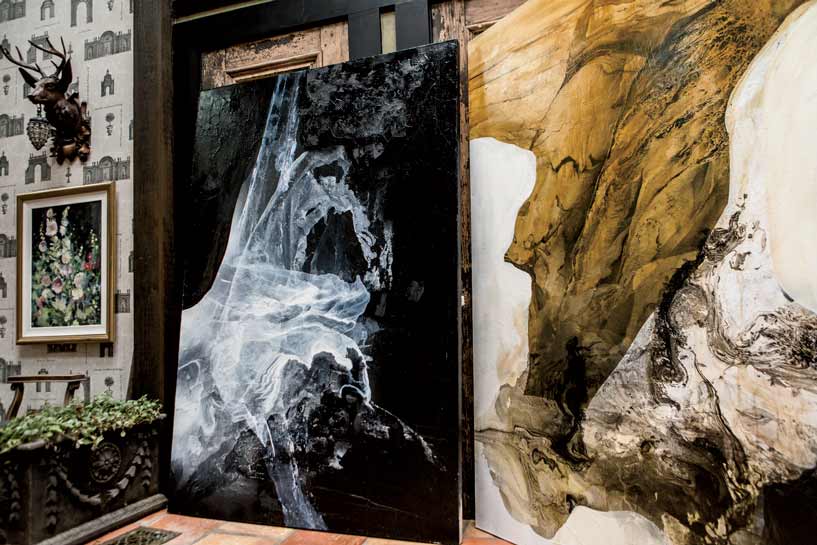 Pieces shown are in acrylic on canvas.

As Carlini’s star has risen, she’s been asked to take on a number of interesting projects. She once agreed to be part of a cooperative art event where she and a fellow artist took turns finishing each other’s pieces. And last September, she was commissioned by Canvass Chicago to complete a 17-foot mural in just two days.

But for the moment, she’s focused on how her return to Kaleidoscope might inspire a new generation of artists to fill canvasses and sculpt shapes according to their own desires.

“My advice is to practice as much as you can— to spread out and not worry about making a mess,” says Carlini. “We learn so much from the messes we make.”

Carlini’s exhibit will run through Sunday, May 25.

The pop-up gallery at Kaleidoscope School of Art is located at 316 W. Main Street in Barrington, 847-381- 4840, kaleidoscopeschooloffineart.org.