When Donn Ziebell of Lake Barrington turned 83, he figured it was a good time to pay a tribute to Jean, his high school sweetheart and wife of 53 years.

He lost her on Nov. 2, 2009, after an all-too-long illness at then-Good Shepherd Hospital in Barrington. “They treated her very well,” he says of those hard days.

To commemorate her loving life and gentle acceptance of his occasional artistic eccentricities, he donated two of his 5-foot by 7-foot oil paintings to Advocate Good Shepherd’s pediatric ward in August. After much negotiation, planning, and measuring, the massive whimsical paintings were mounted on two walls (there aren’t many single walls that could accommodate both). The administrators and pediatric nurses attended, as did the Catholic chaplain for the blessing of the art.

“We are extremely grateful to Mr. Ziebell for donating his artwork to our hospital,” said Jeanette Wagner, MSN, RN, and manager of Advocate Good Shepherd’s pediatric unit. “Because they are so large, children are able to walk up to them and look at them from eye-level, which is something they can’t do with most paintings. We are thankful for Mr. Ziebell’s creativity and generosity.”

He fully hopes that children will stop and be delighted by his unpredictable, eclectic mix of sky, mountains, children and castles. One of the paintings, “Running in Scotmany,” has everything that should attract kids—a castle, children and cows.

“It’s a seriously good-looking picture,” he says. “Kids would look at this, and it would set their imagination and dreams going. Children are very visually minded.” 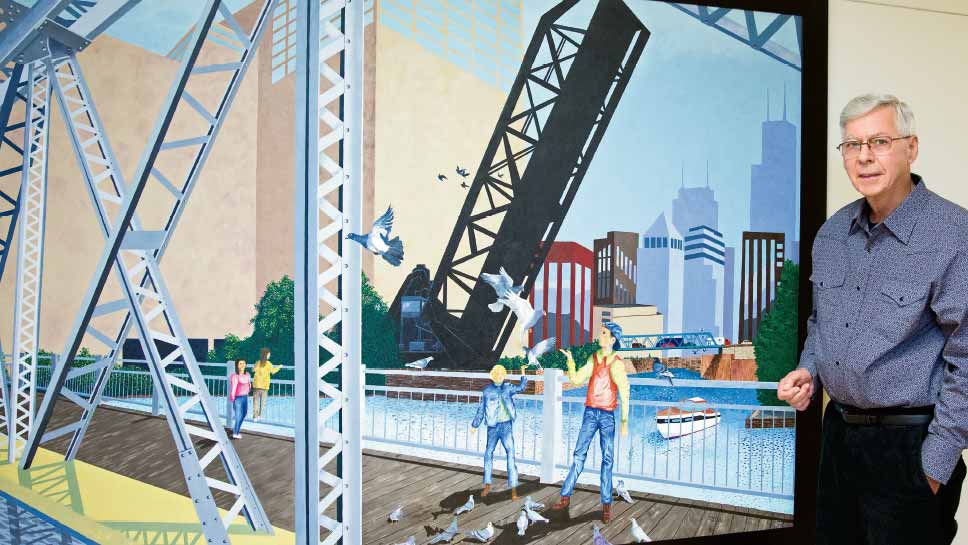 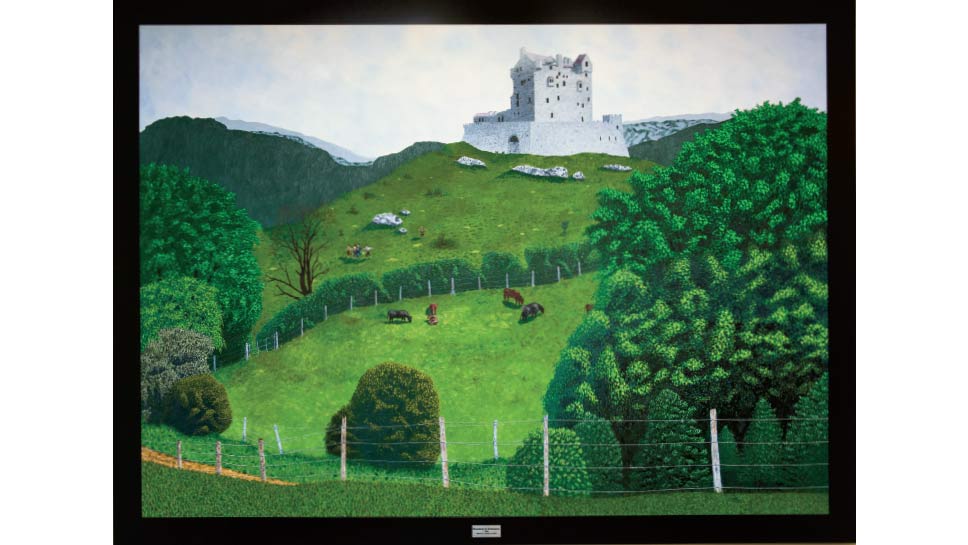 His other donation is “Kinzie Street Bridge Angels,” a Chicago urban-motif fantasy in which strolling youngsters coax the pigeons to land and be fed by hand. Think of it as architecture meets Tolkien meets Gustav Klimt.

Jean might be bemused, as she was on the day she encountered one of his big-canvas works. Some Ziebell canvases are bigger than almost any human. And, as it once turned out, bigger than most doorways and stairs.

“I leaned it against one of the walls in the upstairs bedroom to paint, and when I was finished, I realized it would not fit down the stairs,” he recalls. “So she offered to pick it up, and slide it through the window out to the roof while I ran down the stairs, out the front and up the ladder. When I got up there, she had hold of it on the (tilted) roof.”

The painting was delicately wrestled down the ladder. In return, Jean exacted a promise he’d never again paint one of his giant canvases in any room outside the downstairs den. He acceded.

As to financial value of this donation, Ziebell’s work routinely has been displayed in galleries and juried art shows for 50 years. “I guess they were worth maybe $4,000 each, although asking an artist to appraise his works makes you a little crazy.”

Ziebell says he learned everything about oil painting from his father William in 1955.

Donn was studying to be a metallurgical engineer in college then.

“When I came home on a break in my junior year, I told my dad I was so tired of books, and wanted to do something with my hands. I said I’d like oil painting,” he explains. “My only instruction from dad was simple but difficult. Paint the farthest things first, and then gradually come closer and closer. That’s the sum total of my experience in training.”

In between painting dozens of canvases, Ziebell was a metallurgical scientist and a writer of multiple books. His Gorky, Russia….First Man In tells of his 1990 invited visit to Gorbachev’s closed city to teach capitalistic business.

“I didn’t know then it was an experiment,” he says.

Donating his remaining art now is Ziebell’s subtle acknowledgment that time does not wait for dawdling planners.

“So the last time my three kids and grandchildren were together, I gave them an inventory of 128 items in our house, and told them to pick what they wanted.”

Their enthusiasm was muted. But his daring enthusiasm never flags. Jean would have understood, as she always did. It’s the Tolkien in his soul.