More people need to know about Franco’s Pescheria. Walking by, you definitely understand that it’s a fish market. Beautiful cuts of fresh fish are displayed over ice in a market deli case. Just beyond the case, however, is a brand new dining room where it serves exquisite lunch and dinner options.

The bedrock of its philosophy is the freshness and diversity of seafood options. Never frozen, out of the water less than 24 hours, everything that is brought to the table is incredibly tasty and inventive. All of the fish comes straight from the deli case, sliced and deboned after it’s ordered, adding a little extra time to the preparation but well worth it for the quality of its offerings.

Their Raw Bar menu speaks to its sushi-quality fish selection. The Le Ceviche del Giorno (Chef’s Ceviche of the Day) during our visit had cubes of red snapper and a salsa-like mixture of chopped cilantro, avocado, red pepper, red onion, and lime juice. The red pepper and onion keep it light and zingy with a meaty chew from the fish and a bright citrus thread. Fryer-fresh house made tortilla chips further the salsa impression and act as the perfect crunchy conveyance for the ceviche. 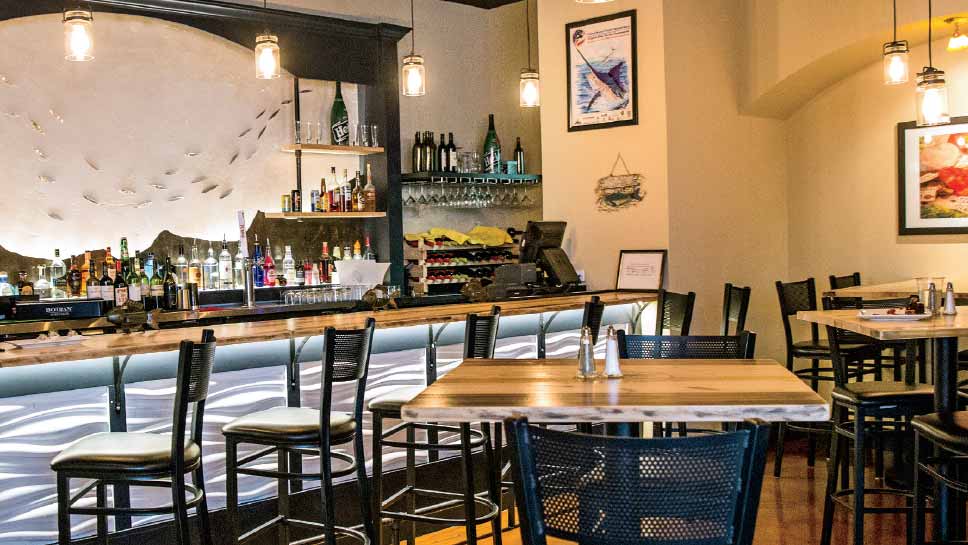 With the opening of their dining room, Franco’s Pescheria goes from a favorite fresh seafood market to an elegant dinner date destination. PHOTOGRAPHY BY ROBIN SUBAR 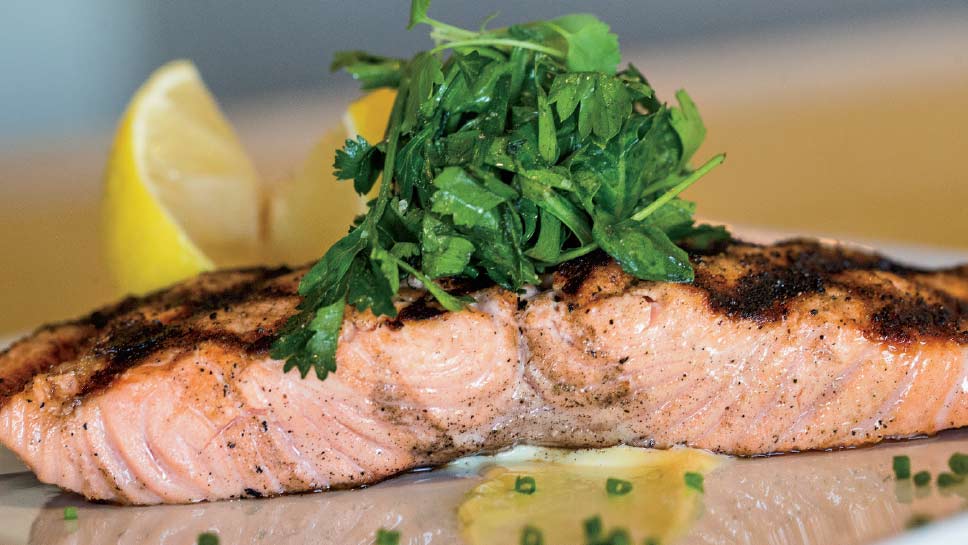 Also from the Raw Bar, the Uova Facita di Tonno (Tuna Stuffed Deviled Eggs) were one of the highlights of our night. The smoked tuna salad has been a hit for awhile, sold from the deli case in the front. It’s made of brown sugar creole-seasoned albacore tuna smoked over cherry or apple wood, combined with cubed apples, carrot, and cumin mayo. For the restaurant presentation, it’s scooped into hardboiled egg whites over a smear of chilled yolk sprinkled with paprika. It’s a lovely reinterpretation of classic deviled egg, creamy and fruity with a textural crunch from apples and a satisfying tuna chew.

We can’t leave the appetizers without mentioning the oysters. They have a daily selection of hot and cold oysters served over salt. The classic Ostriche Rockefeller (Oysters Rockefeller) are topped with a warm, melted concoction of spinach, cream, Pernod, tarragon, parmesan, and panko breadcrumbs. They had the rich, creamy depth of alfredo sauce eaten straight off an oyster shell. For a cold oyster option we sampled the Ostriche Messicane (Mexican Style Oysters) with chopped onions, tomato, peppers, with a big slice of jalapeno sitting on top. The bright flavors of all the vegetables bring out the naturally fresh flavors of the oyster. 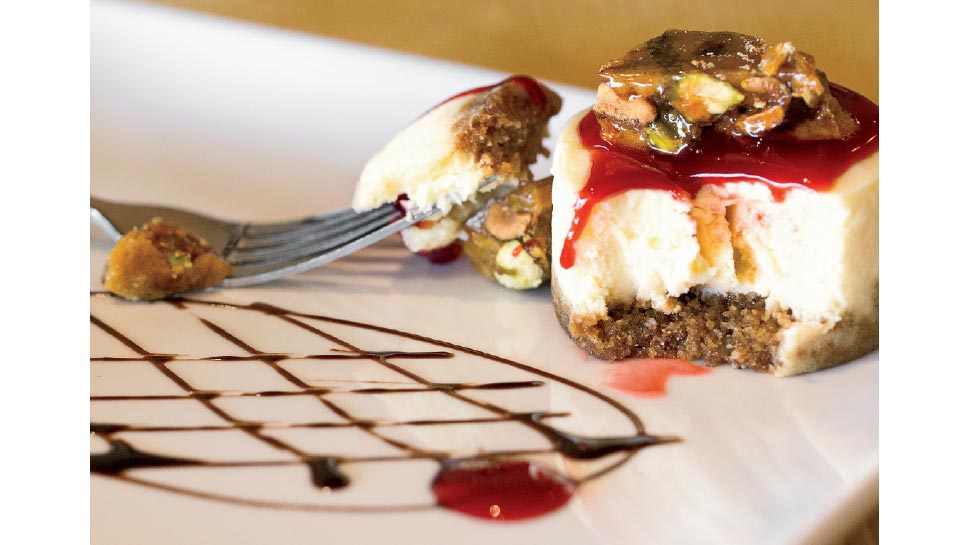 The main event was the Cattura Fresca (Fresh Catch), where we each picked one of the fish out of the case based on the 18 daily selections. We chose the types of fish; whether we wanted it broiled, fried, or grilled; and our server talked us through the flavor profiles of the eight different sauce options and what might pair nicely with the fish selection. We also chose the cut— the standard is eight ounces—but they offer as small as a four-ounce and as large as a whole fish.

Our first fresh catch was an Ora King Salmon from New Zealand, vibrantly pink with a nice sear to the outside keeping the center sushi medium-rare. Keeping with that theme, we paired it with wasabi sauce that delivered a lovely kick to each bite, and it was topped with parsley, arugula, and a slice of lemon to squeeze over everything. This particular fish was one of their organically farmed options.

The Hawaiian Monchong, when served fresh is also a delicate shade of pink. Some people might think there’s been a mix-up because Monchong that comes out of the freezer loses its color, so it’s more commonly seen as a white fish. With the same grilled-to-tender aspect in the preparation as the salmon, the natural flavor of the Monchong was incredibly delicate, almost floral. We opted for it served over a pool of their calabrian chili aioli sauce, which added a lovely spice factor that slowly builds over the course of the dish. 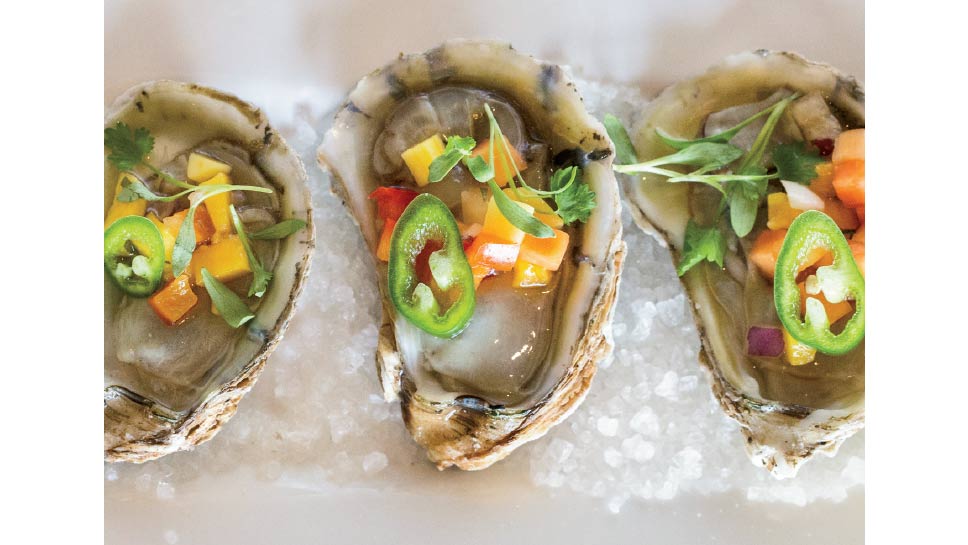 The dessert offerings come from Whisk Bakery out of Wauconda, and we tried two perfectly petite cakes, each no bigger than a cupcake. The Cheesecake was a miniature version of the classic covered in a light strawberry sauce, very decadent with a touch of fruity sweetness. The Flourless Chocolate Cake was covered with a thin layer of chocolate fondant, it’s hard to believe that so much dark chocolate flavor can be packed into such a lovely little package.

From the fish market case to every flavorful dish that came to our table, Franco’s Pescheria is a wonderfully unique night out unlike any other place we’ve been.