Motor Werks Auto Group Founder and Chairman Paul Tamraz has a story to tell, and its main characters are former Chicago Bears tight end and head coach Mike Ditka and a janitor who worked at the team’s headquarters, Halas Hall, in Lake Forest.

Tamraz, sitting behind the desk in his roomy office at Motor Werks of Barrington, inches forward, clearly excited to set the scene and describe its moments for a visitor at the crack of his workday.

The 73-year-old’s friendly eyes grow friendlier and begin to dance. 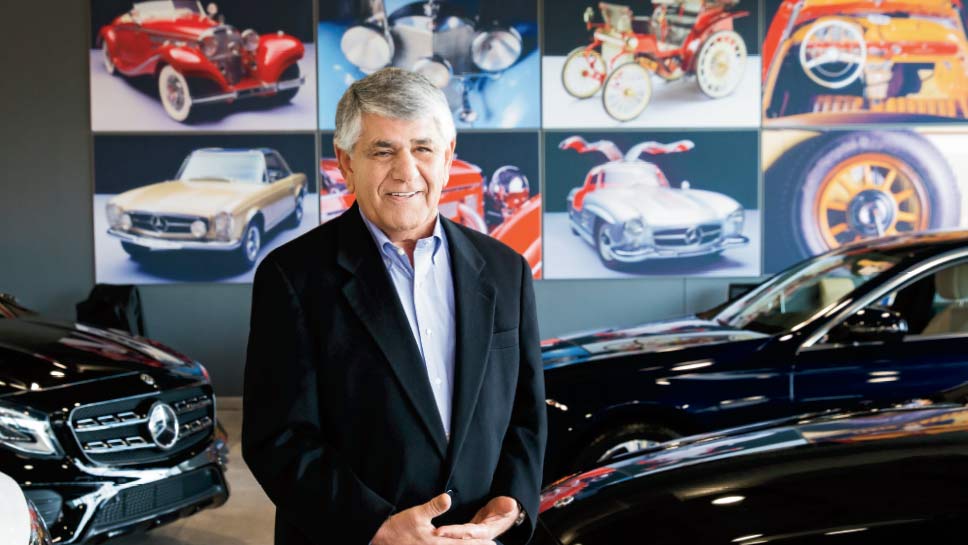 “Mike Ditka had invited me to his NFL Hall of Fame induction [in Canton, Ohio, in 1988],” says Tamraz, a co-trustee (with Robert Krebs) of The Mike Ditka Hall of Fame Assistance Trust Fund, founded in 2004. “We’re at this table. I look around and see Mike’s delightful wife, Diana, (former Bears GM) Jerry Vainisi, Ed O’Bradovich and other former Bears. Big, big names, famous people to me; I recognized practically all of them. Then I see this man, in a tuxedo. I’d never seen him before. I asked someone at our table, ‘Who is that’?”

It was a Halas Hall janitor.

“Mike Ditka,” the Barrington resident adds, “had invited him to be a part of his big day. How ’bout that? Isn’t that something? The janitor had traveled to Ohio on a motorcycle and rented a tuxedo for the ceremony. That’s the kind of man Mike Ditka was and still is. He’s done many wonderful things for the city and for people—for so many people from so many places.”

The Chicago Bears’ 1985 Super Bowl championship team bludgeoned opponents with its 46 defense. Forty-six also happens to be the number of years Paul Tamraz’s name has essentially been synonymous with Motor Werks. It started in 1971 with a couple of dealerships (Mercedes-Benz and BMW) in one store at 206 North Cook Street in Barrington.

The Hoffman Estates’ sites feature Jaguar, Land Rover, and Sprinter dealerships, among others.

“This business is the kind you can’t run without wonderful, committed people in each department,” says Tamraz, whose son-in-law, Mick Austin, serves as Motor Werks Auto Group CEO/president, and whose daughters (with his wife, Nancy), Megan Austin and Nicole Daniels, oversee many of the auto group’s philanthropic endeavors.

“It’s always been a thrill for me, for all of us here, to have the opportunities to sell such brands to car customers in Barrington and its surrounding communities. I love this business, I love the people who work here, and I love this community. I’m the luckiest guy in the world; I must be.”

Tamraz, of Assyrian descent, grew up in Flint, Michigan, as the son of Alex and Sarah and the brother of three sisters. Alex worked at a Buick factory. Paul Tamraz was elected class president at Flint Central High School and played quarterback for the football team.

“I wasn’t any good,” he says, chuckling. “The coach told me to play quarterback, so that’s what I played.”

He majored in business at Michigan State University and completed a sales internship with the Chicago Tribune in between his junior and senior years.

“That experience with the Tribune was great, quite valuable,” says Tamraz, who worked in sales for the newspaper for five years after college, before forming an agency (Jordan Tamraz and Caruso Advertising) with two others. “I knew, while I was in college, I wanted to land a job in either Chicago or New York City.”

While living in Long Grove, Tamraz entered the automotive sales industry with his purchase of an AMC dealership in Olympia Fields. His round-trip commute: nearly 125 miles.

That got old. Fast.

He then launched Motor Werks, in 1971, at the Cook Street location. Years later, Tamraz and his landlord, Al Borah—“Mr. Borah,” always “Mr. Borah,” to Tamraz—developed a strong mentee-mentor relationship. Borah, who died at the age of 83 in 1990, was a land developer for more than 40 years in the Barrington area, served as chairman of the Illinois Industrial Commission, and worked (from 1946-48) as assistant sheriff to former Cook County Sheriff Elmer Michael Walsh.

“Mr. Borah was a smart man and a visionary,” says Tamraz, a grandfather of five (ages 13-22) and a part-time resident of Naples, Florida. “He knew everybody in Barrington and everything about Barrington. He also helped me with the auto mall concept.”

Among Tamraz’s passions away from the office is playing gin with his good friends. He doesn’t play as much golf as he did decades ago, but that doesn’t stop him from telling another story about another sports luminary, this one taking place outdoors, nowhere near Canton, Ohio.

Tamraz had joined three others for a round of golf at a pro-am in Hawaii.

“The pro in our foursome was a golfer named Tiger. Ever heard of him?” Tamraz begins. “There must have been 4,000 people, at least, lined up on both sides of the fairway. They were not there to see me hit my drive.”