Recently a friend emailed me about a scene he observed outside the window of his kitchen in the early morning:

There is this Downy Woodpecker that has been roosting each night in the wren house not 15 feet from my observation platform (the oak rocker at the back picture window). Have seen him sneaking in there many times as daylight fades. Had not ever seen him emerge though. Did he actually spend the whole night?

However, this morning just before sunrise there he/she sat in the slightly enlarged birdhouse opening blinking and checking out the morning. Definitely preparing to launch for another day. Best of all was that as I watched his “face” through my binoculars, the little guy actually yawned. Was it an actual yawn? Was he just stretching his jaws? Maybe he was simply showing off.

Regardless, I felt privileged to be witness. Here I am only an hour into this winter day and already two more of life’s most vexing questions answered: yes, the Downy may spend the night at the wren’s house, and he may indeed yawn at dawn.

The delightful message prompts me to give a fuller account of this species.

At just over six inches from tip of beak to tip of tail, the downy woodpecker (Picoides pubescens) is the smallest of the woodpecker family found in North America. In the Barrington area, the downy is a permanent resident. It lives here year ‘round, as opposed to woodpeckers that migrate such as the northern flicker and yellow-bellied sapsucker.

Like all woodpeckers, downies nest in tree holes that they drill and excavate with their beaks. The bills and heads of all woodpeckers are specially constructed to absorb the repeated shock of jack-hammering; special bones act like an internal bike helmet. Once it penetrates the hard bark, the woodpecker chisels away at the softer cambium and pulp layers, tossing and carrying off beakful after beakful of inner tree, until it has fashioned a cavity several inches deep. Soft wood chips are left to lie at the base of the cavity to cushion the four to five eggs laid there by the female. Both she and her mate will incubate them for just less than two weeks before they hatch and the parents go into over-drive bringing their offspring succulent insects for nourishment. 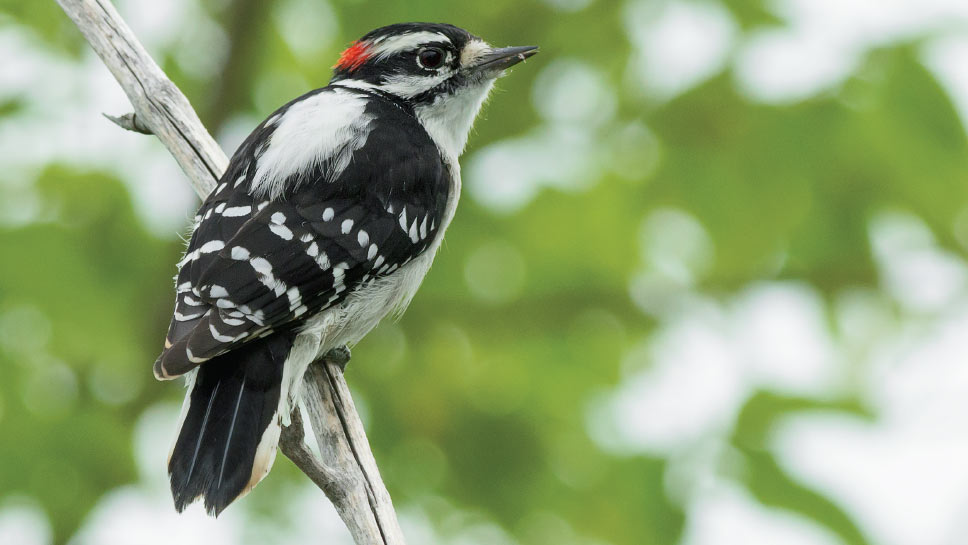 We take a closer look at the downy woodpecker.

In wintertime, downy woodpeckers can be easily spotted—at bird feeders (they especially love suet cakes), prospecting for insects in tree bark, hammering at plant swellings called galls which harbor insect larvae and eggs. While you can expect to see downy woodpeckers most often in woods and treed landscapes, it’s not uncommon to spot them in open fields as they peck at galls on goldenrod stems.

It is easy to distinguish between the male and female: he has red feathers on the back of his head, she does not. It is not so easy to tell the difference between a downy and its slightly larger look-alike, the hairy woodpecker. The best clue is bill length. The bill of the downy is much shorter than the width of its head, while that of the hairy roughly equals the head width. Their calls are different, too. The downy’s “pik” is not as strong or sharp as the call of the hairy woodpecker.

Watching downy woodpeckers is satisfying occupation, whether it’s their characteristic rise-and-dipping flight; their comical, jerking courtship movements in early spring; nest excavation; or foraging for insects. I cannot guarantee that you’ll spot a downy “yawning” at the entrance of a wren house, but I am confident that you will find efforts to find and watch the species a rewarding experience.