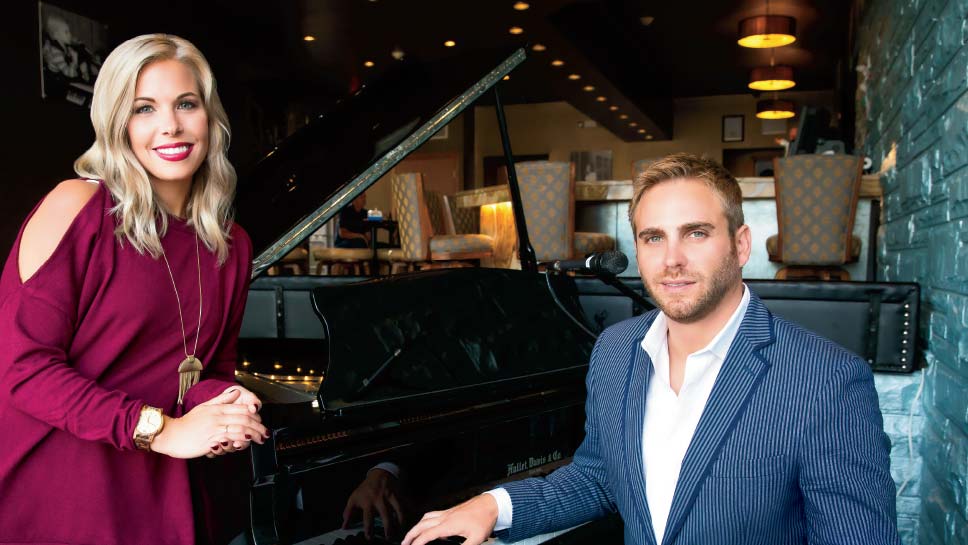 Music industry executive Chris Bauman and his wife, Lisa, are bringing a taste of city life to Barrington. We sit down with the couple to hear how they met and what might be on the horizon. PHOTOGRAPHY BY ROBIN SUBAR

That’s right. The enterprising business man who brought a new retro-style piano bar to Barrington and his “stay-at-home-lawyer” wife have been so busy working and raising their three young children that the Academy Award-winning Hollywood blockbuster managed to escape them. Meant to see it, but didn’t.

That’s OK. The minute they start telling you their own show business love story, you realize these two dreamers don’t need to. Besides, their version has a happier ending.

“She met me and fell immediately in love,” he says, laughing. “Love at first sight.”

“I met you and didn’t hear from you for three years!” she protests, juggling baby Havana on her knee while the adorably mischievous middle child, Blair, finds herself a snack in the family’s Lake Barrington home.

Both parts are true, sort of.

Bauman, a Glenview native, was a young entrepreneur working on an M.B.A. in Valparaiso, Indiana. Had a girlfriend at the time, but was captivated by a young East Coast law student, also attending graduate school in Valparaiso. The two had a conversation neither would forget, friended each other on Facebook, but then time passed before they saw each other again—three years to be exact.

“Then Chris messaged me on Valentine’s Day,” Lisa says, smiling at her husband as the story continues to unfold.

Chris was starting to make a name for himself in concert promotions and talent management. A little band called The Lumineers (as in, the one that recently opened for U2 at Soldier field) was scheduled to appear at a SXSW Music Festival event in Austin, Texas.

“I had to drive down there unexpectedly,” Chris explains, “so I call her and say ‘are you up for an adventure?’”

She was. The couple’s first date was essentially a road trip to coordinate an 800-person show for The Lumineers in Austin that year, which was followed by an appearance at Lollapalooza the next.

“So that’s how we fell in love,” Chris says, getting out a snack for the couple’s oldest—7-year-old Landon who is just arriving home from school on a recent fall weekday afternoon.

The rock and roll life Chris was leading only ramped up as he got more successful, and the couple got married and settled in Chicago. There was some glamour, of course, but it also came with a lot of late night gatherings that were no longer conducive to raising a family, once Landon was born.

“It was time for a change,” says Chris, explaining that while his career was important, family needed to come first. “I had been doing that for a long time and thought it would be better if I was less accessible.”

The obvious choice for moving to a suburb was Chris’s native Glenview, where he grew up. But something didn’t feel right there. They stayed a few years and then discovered Barrington.

Lisa, who put her law career on hold to raise the couple’s three children full-time, says the school and church community she has found here is just what they were looking for. Growing up in a suburb outside of Boston, the idea of having woods and trails and natural beauty in her backyard is a new and welcome concept. As such, the couple’s home in Lake Barrington is decorated and designed with their children in mind—with plenty of toys and play equipment to play and explore. On the day that we visited, there was even a giant tent set up in the backyard, just for fun.

“I love it here,” she says. “I’ve made so many friends and there is such a network of support for parents. We could not be happier.”

Meanwhile, Chris has been quietly working to bring a taste of the city music scene to Barrington.

“I’m not going into the city as much these days. If an artist comes into town and wants to meet for drinks, I ask them to schedule a breakfast meeting instead,” he explains, dropping a hint. “But soon, there may be more reason to come to Barrington.”

The first part is hardly a secret. A year ago, Chris unveiled Shirley’s Piano Bar in downtown
Barrington—fulfilling a dream he’s had most of his life to create a small, moody club to hear great live music and name it in honor of his piano-playing grandmother, Shirley. But he’s also hard at work on an exclusive “invite only” recording studio where visiting celebrity artists can drive up and cut new tracks in the serenity of Barrington.

“I’m trying to bring a taste of Nashville and that old Sun Studios feel to Barrington,” says Chris. “There’s more, so stay tuned, but I can say that the response to Shirley’s has gone beyond all our expectations.”

Our afternoon with the Bauman family ended at Shirley’s with their own version of the La La Land closing scene, only better. Lisa and Chris are happy and attending to customers, many of them faithful regulars. Landon plays on the floor with Blair and points out that Havana’s crawl gets quicker and quicker. There is music playing and black and white photos of Chris’s musician relatives on the walls.

“We have really found our place here,” Chris adds. “It really is turning out to be the best of both worlds.”