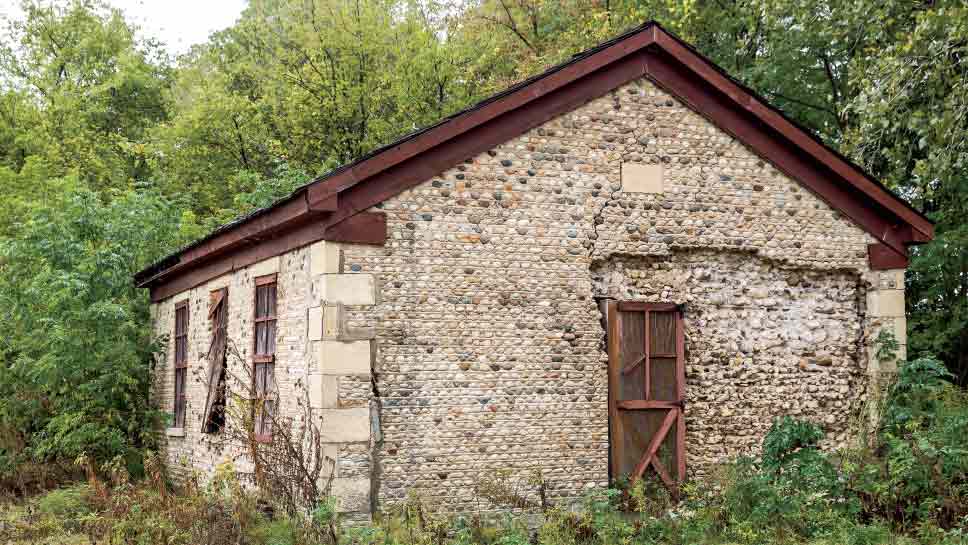 A quest for a little stone schoolhouse. PHOTOGRAPHY BY ROBIN SUBAR

Once upon a time, as the story goes, the prairie pioneers west of Barrington wanted to plant the permanent flag of civilization, and they figured no better testament than a stone schoolhouse.

It would be sturdy, functional, and more or less permanent as prairie pioneers understood the concept.

That was 1855. E.E. Dickinson was reputedly the head of the first school board. So his name would adorn the carved stone nameplate above the front door.

But the one-room primary Dickinson Schoolhouse that housed 76 years of “readin’, ’ritin’ and ’recess” along the rural backroads between West Barrington and Algonquin is long gone now. History and time swallowed it up, as it did most old buildings long untended and unnoticed.

Or did it? Maybe it was razed long ago as punishment for obsolescent uselessness. Maybe remnants still exist. Who knows? We set on a quest to see what we could find.

As with any investigation, seeking historical proof of an old building’s existence is complicated if you must rely on documents, histories or even eyewitnesses.

The instant the presses roll, a history book’s assurances might be irrelevant. A fire, or age, or a wrecking ball might doom the building with almost no warning. Old buildings fall down and are then pillaged by human scavengers.

A handful of Lake County historians and naturalists say it’s there, if you only know exactly where to look. Some say they’ve seen it, but years ago.

So we went looking for Dickinson School ourselves, thoroughly believing it might not exist. We sought road signs or notations in published maps. We employed GPS. Who can misplace historical features if the seeker has GPS guidance?

So down Algonquin Road (Highway 62) we headed west, keeping alert for historical markers. Dickinson stood somewhere near the “fork in Algonquin Road and Highway 25” we had been assured by a local naturalist. But which prong of the fork? Intersecting highways produce four forks. We’d forgotten to ask.

So we drove west past the intersection, keeping “eyes peeled” as our parents used to suggest. Nothing. Then south on Highway 25 nearly to Carpentersville. Nada. Then north toward Lake Cook Road. No luck.

Houses, businesses, gas stations. No old stone schoolhouse, or even decrepit masonry rubble where it might once have stood.

From old drawings, we knew how it appeared originally. It was roughly 24 feet by 40 feet, built of cobblestones, and topped originally with a bell tower cupola over a boxed gable roof. Three tall rectangular windows lined each of the long sides and a tall, narrow doorway bisected the front wall.

We stopped and asked various merchants about the old schoolhouse. It’s really historical, we assured them. Never heard of it, was the common reply.

Then we perused space satellite maps produced for the U.S. Department of the Interior and the U.S. Geological Service. They indicate Dickinson School was at Latitude: 42.1319695 and Longitude:-88.2573029. The companion map showed that site to be farther south on Highway 25 at the Helms Road intersection.

Momentarily defeated (did Conquistadors feel this way when they couldn’t find El Dorado?) we headed north and then turned right at the Highway 62 stoplight. We picked up speed east, back toward Barrington.

And then, for no reason besides mindless gawking, we swiveled our head to look at fall foliage, and caught a flash of unexpected light reflecting from the woods just to the right of us.

In fact, that solo rumination was exactly the conversation that May Theilgaard Watts had with herself in 1953. She and three explorer friends had gone looking for the school on a car road trip, too.

Watts was a legendary Illinois Prairie naturalist, botanist, and philosopher whose Reading the Landscape of America features a chapter on her finding the little schoolhouse. Dickinson had been as ignored in1953 as it was in 2017.

We u-turned and pulled off the road.

We exited the car.

Buried in deep thickets of wild prairie plants and new-growth elms and oaks, the little stone fortress was camouflaged by its natural mottled brown and gray coloration. It meshed subtly with surrounding foliage.

There is a moment of hushed breathlessness when you find an ancient artifact. True, we were not Napoleonic soldier Pierre Bouchard discovering the Rosetta Stone in 1799. That discovery unlocked a 14,000-year linguistic mystery. We had merely found an old schoolhouse. But, still, you take your profound moments when you can.

Except for old age—and the West Barrington police who used the building briefly in the 1970s as an outpost—Dickinson remains remarkably intact.

When historians noted Dickinson was a “cobblestone” building, they did the architecture an injustice.

The stones of this building are bigger-than-fist-sized glacial rocks, bonded permanently with lime cement and seemingly impervious to anything but Gamma rays. There were rumors that local historians had toyed with moving the entire building to preserve it elsewhere. Indeed, the building once sat 100 yards to the west, but was moved to its current spot in the 1940s atop a better foundation.

That was a giant feat because Dickinson might weigh as a much as a nuclear aircraft carrier.

Peeking inside the boarded windows, we see tables and chairs, perhaps left from its police substation era. Chipminks live there now.

When Watts’ troupe found Dickinson, there were signs of its school days: paper remnants, and a “blackboard” that was primarily a thickly painted section of wall. By testing lichen growth, trash remnants, and school materials left on its last day when the school’s contents were auctioned, Watts’ explorers figured the school had gone dark in the early 1930s.

The Watts explorers included a teacher who assessed this school taught Palmer-method writing with its 15 rows of perfect capital As. Teen-aged girls, fresh from two weeks of Teacher Academy training, were the customary instructors in the 1800s.

Dickinson remains an almost monolithic boulder constructed of 10,000 smaller rocks. It does not appear to be going anywhere in this millennia. Or the next.

For generations who absorbed academic citizenship there, Dickinson was their own Rosetta Stone that unlocked their vault of knowledge.

E.E. Dickinson’s carved nameplate still greets you at the door.