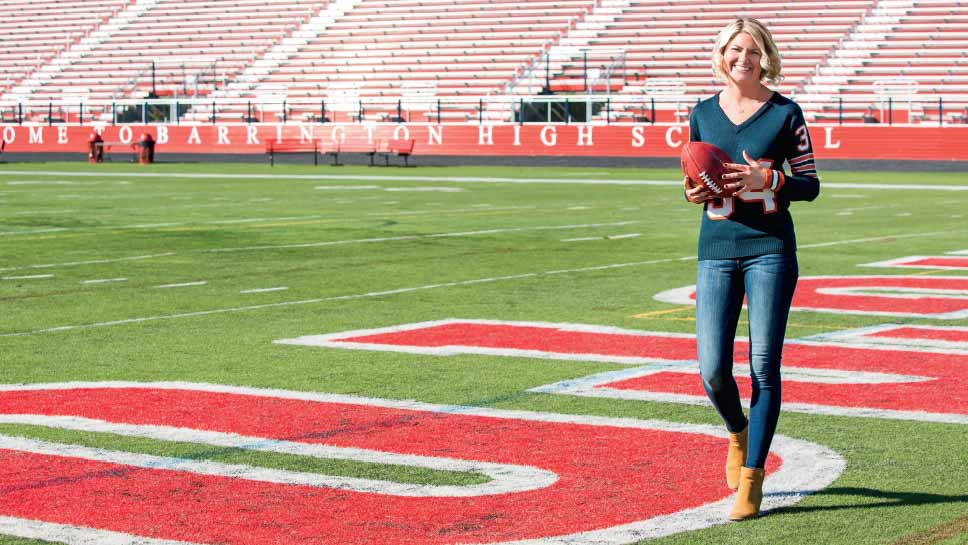 Barrington native Katie Teuber may be living her dream as a content producer for the Chicago Bears, but her life goals go beyond capturing touchdowns. We find out how she turned her broadcasting experience at Barrington High School into a career, and the touching video tribute she made about her sister’s cancer journey. PHOTOGRAPHY BY ROBIN SUBAR

First impressions might be that Katie Teuber is just cosmically lucky. But you’d be wrong. She just works harder.

If you’re a fan of the Chicago Bears, the Chicago Cubs or even the Chicago Fire, you know Katie Teuber without recognizing the name. If you’ve seen the televised Inside the Bears, Gameday Live, and Gamenight Live on FOX 32 Chicago, that’s her behind the camera. If you’ve watched Jumbotron replays at Wrigley Field of Kris Bryant smacking mammoth home runs, that’s her freelance video and editing on display.

She’s a content producer who melds video, sound, lighting, and drama to tell stories. “Yes, first I see myself as a storyteller,” she says.

And her work shows up everywhere in Chicago.

Katie Teuber worked hard. She saw a path. She took it. No easy roads. Just devoted work and passionate talent. Her dedication is sweat equity in her life.

She is a Barrington-born, Barrington-schooled, Barrington-matured rising sports media star in Chicago—who burns most intensely because she avoids standing in front of high-resolution video cameras. She never wanted to be on screen. Instead, she’s the anonymous story-telling voice you never hear; the face you never see; the narrative director whose editing nuance never shouts. She has not only mastered digital technologies but the art of subtlety.

Teuber’s been that hidden wizard behind the lens ever since 2007, her junior year at Barrington High School where the BHS-TV student broadcasting program took flight under Jeff Doles. He remains a mentor and friend. She visited Halas Hall’s media center in high school. She could not get enough of the experience. “I knew I had to get involved,” she says.

Teuber learned how to work hard from her father. “He grew up middle-class on the Northwest side of Chicago,” she says. “Dad delivered papers, flipped burgers and pumped gas to pay for college. Then he founded a successful company. He’s always been an inspiration.”

She was 18 when she spent Friday night’s video recording Barrington High football games. Now she does the same for the Bears who were her lifelong idols. She was a dynamo at DePaul University where she crammed four years of TV production education into two class days each week, all so she could grab every available internship opportunity. That’s hard work.

She produced online video news for the Chicago Tribune.

But she could not escape her dream, or her dream team. So when she walked into Halas Hall four years ago and applied for a job, she was shocked they said “yes.”

The affirmation was no accident. Her demonstrated skills fit perfectly inside the new Halas Hall media fortress, among the most advanced in-house multimedia facilities in the National Football League. The 40,000-square-foot addition features state-of-the-art TV and radio studios.

Teuber works in a media glitter palace that easily equals Chicago’s TV industry outlets in size and sophistication. Halas Hall is a one-industry town with its own media infrastructure, and Teuber is its town crier. She produces highlight videos, press conferences, documentaries, community pieces, commercials, news segments, and interviews. “We even produce our own preseason games,” she says.

But her technological muscle and storytelling artfulness aside, some days Teuber cannot believe she actually works for the Bears—with the Bears—every day. She’s loved them ever since she was a second-grade soccer player in Barrington.

“I like (offensive tackle) Kyle Long the best. He’s my favorite. He is a funny guy,” she says of her regular interviewees. “While I have had the privilege to work a wide range of jobs in the media industry, working for the Bears has been a once in a lifetime opportunity. I pinch myself every day when I walk into the doors of Halas Hall, because it still seems too good to be true. I love doing what I do so much, and it never feels like work.”

If anything, a job in the Bears organization feels like being part of a big family, Teuber explains.

“It doesn’t matter if you’re a coach, player, or videographer, everyone feels like they are a part of the team,” she says. “My goal is to one day hold that championship Lombardi Trophy and be a part of a Bears Super Bowl winning team.”

Interestingly enough, Teuber’s first inspired video work in high school had nothing to do with sports. She collaborated with her sister, Sherrie, on a revealing, heartfelt examination of facing cancer with candor and courage.

“Just weeks before my freshmen year at Barrington, my sister Sherrie (then 27) was diagnosed with Stage IV Hodgkin’s Lymphoma, which put a tragic standstill to my life,” she explains. “My family had never been associated with a tragedy of this degree. Throughout the year, my sister struggled with multiple relapses, a major femur surgery, and sepsis. She ultimately had to get a stem cell transplant, which ended up saving her life. Sherrie was always, and still is, an open book when it comes to speaking about her cancer. This open and honest dialogue with her helped me capture not only her story, but also helped inspire those with cancer around her.”

Her video of that interview—Every Day I Wake Up and I Just Say Thank You—was nominated for a Chicago Emmy.

Sherrie’s cancer has been in remission for a decade, and she is a stay-at-home mom to twin boys. The video is a subtle, uninterrupted multi-angled conversation that shows Sherrie’s courage and Katie’s reserve as a storyteller.

It reflects a future media professional with several levels to her game. It’s become the work of her life.

So perhaps Katie Teuber had a bit of cosmic good fortune on her side. After all, she landed her dream job before age 30. But that does not seem surprising in hindsight.

Katie Teuber already had learned the most useful skill of all. She learned to make her own luck.