Then welcome to Halloween hauntings on dark, brooding Cuba Road just north ofBarrington. This is Ghost Central, if any of the 60 years of stories are true or even plausible. The Vault withholds judgment.

But stories about Cuba Road’s spirit realm are resilient. Though three folklore authors have profiled the place, stories exhumed from The Vault are usually spawned unfiltered from eyewitnesses. This place has legends about every variety of 15 devotee-recognized types of apparitions, except Ichabod Crane’s headless equestrian.

Likewise, if you’ve a taste for gaseous orbs of trapped psycho-kinetic consciousness or burning long-ago razed “insane asylums” that appear and then vanish in the darkness, then step right up to Cuba Road. There’s always one screaming victim inside a disappearing burning building.

Cool, right? On the other hand, if ghosts scare the bejeebers out of you, turn back before it’s too late. Save yourself. 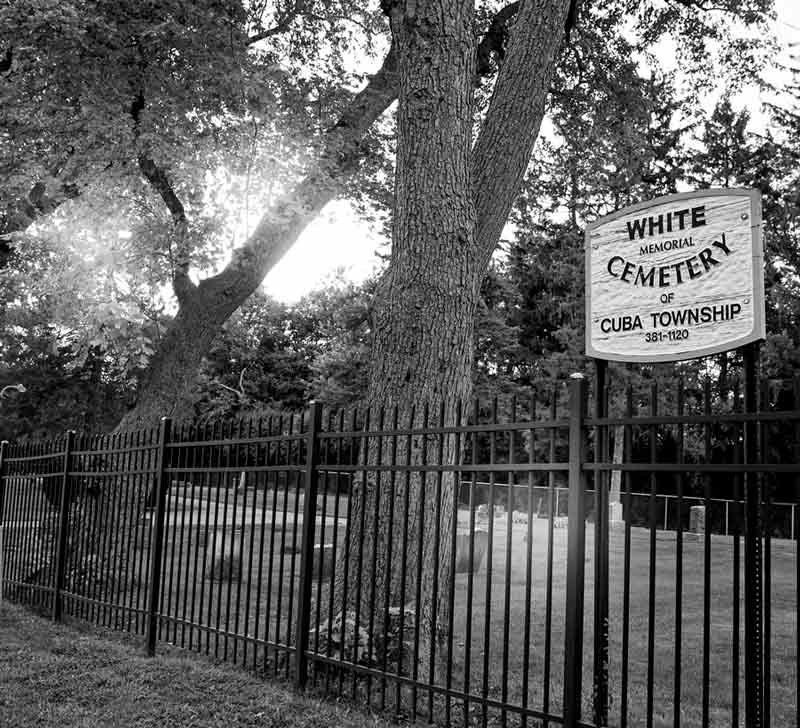 Oh, by the way, at night it’s also home to least 20 reputed ghosts. We are going there because it’s almost Halloween. If you wish to experience the march of transient souls on All Hallow’s Eve, there is no more spookily busy place than Cuba Road.

“I’m not interested in the truth or falsehood of ghost stories or haunted places,” he said. “Ghost stories, which are a type of folklore, are culturally significant and can teach us a lot about our history and beliefs. Belief in ghosts is somehow part of the human experience, at least in our culture. I’ve visited hundreds of supposedly haunted places and never saw anything unusual, but who am I to discount the experiences of so many other people?”

For the record though, Priscilla Rose wishes you’d just stay away. As official Clerk of Cuba Township and member of the governing board of its cemeteries, Rose has battled cemetery vandals for 21 years, in addition to thrill-seekers and the innocently curious.

The White Memorial Cemetery, hub of Cuba Road’s peripatetic parade of the paranormal, is her official domain. She guards the little rectangular plot. Some of its 100 permanent residents were Barrington pioneers born in the 1700s.

“First, it is a cemetery and respect is due those interred there. Be respectful. That is my paramount goal,” she says. “People can believe in ghosts if they want. Just stay out of the cemetery. People with loved ones there deserve to know they are resting peacefully.”

But visitors and vandals don’t stay away. That’s why Rose had security cameras installed, locks the iron gates at dark, and summons Lake County deputy sheriffs to stand guard every Halloween.

Rose ain’t ’fraid of no ghost, but ghost-chasers do aggravate her.

“Never seen one (ghost) in 33 years, and I live in the neighborhood,” she says. “People who live here have’t seen anything either. But they do get pretty tired of all the people who show up looking for ghosts.”

Hard evidence about the ephemeral might be elusive. However, something does seem slightly askew about Cuba Road. That’s especially true at dusk and dead of night, when lack of street lights and rising methane mists from the marsh might exacerbate the macabre.

Authors and folklorists Ursula Bielski, Scott Markus and Kleen all have profiled the road, cemetery, and the stories that blossom from them. Real crimes from decades ago become grisly ghost stories with little prodding.

“They metastasized into a general feeling of dread centered on abandoned houses along the road,” Kleen said. “Teens used several of these abandoned houses to drink and hang out and probably told stories to scare each other.”

These reports are less careful scientific studies than repeated tales by eyewitnesses who’ve been scared silly. “Every time we get some press, some wacko climbs in his car convinced he can see a ghost at midnight,” a longtime resident told the Chicago Tribune.

Aside from luminescent orbs near the cemetery, the most consistent phantom are vehicles. Says Kleen: “Some motorists have reported glancing in their rearview mirror, only to be startled by the appearance of a burly man dressed in 1920s attire, puffing on a Cuban cigar. Others swear they have been tailgated by a truck or a black car that shines its headlights into their rear windshield and then vanishes.”

The theory? Maybe Capone henchman on a midnight bootlegger run.

But Rose has answers for some phenomena. It’s now widely understood by police that Cuba Road is a double-dog-dare rite of passage for Chicago teens. The test involves teens zooming cars and pickups down the road at night without headlights.

Rose also has a theory about the luminescent orbs, other than natural methane/CO2 combustion. Swamp gas can mimic spirits.

“I was there one night and saw the orbs,” she said. “I got out of my car, and approached them. It turns out they were my car’s headlights shining on a white fence.”

After two decades of this battle, Rose often has been angry and exasperated at ghost-hunters. But she’s never been spooked. So if you trespass this Hallow’s Eve, consider yourselves warned.