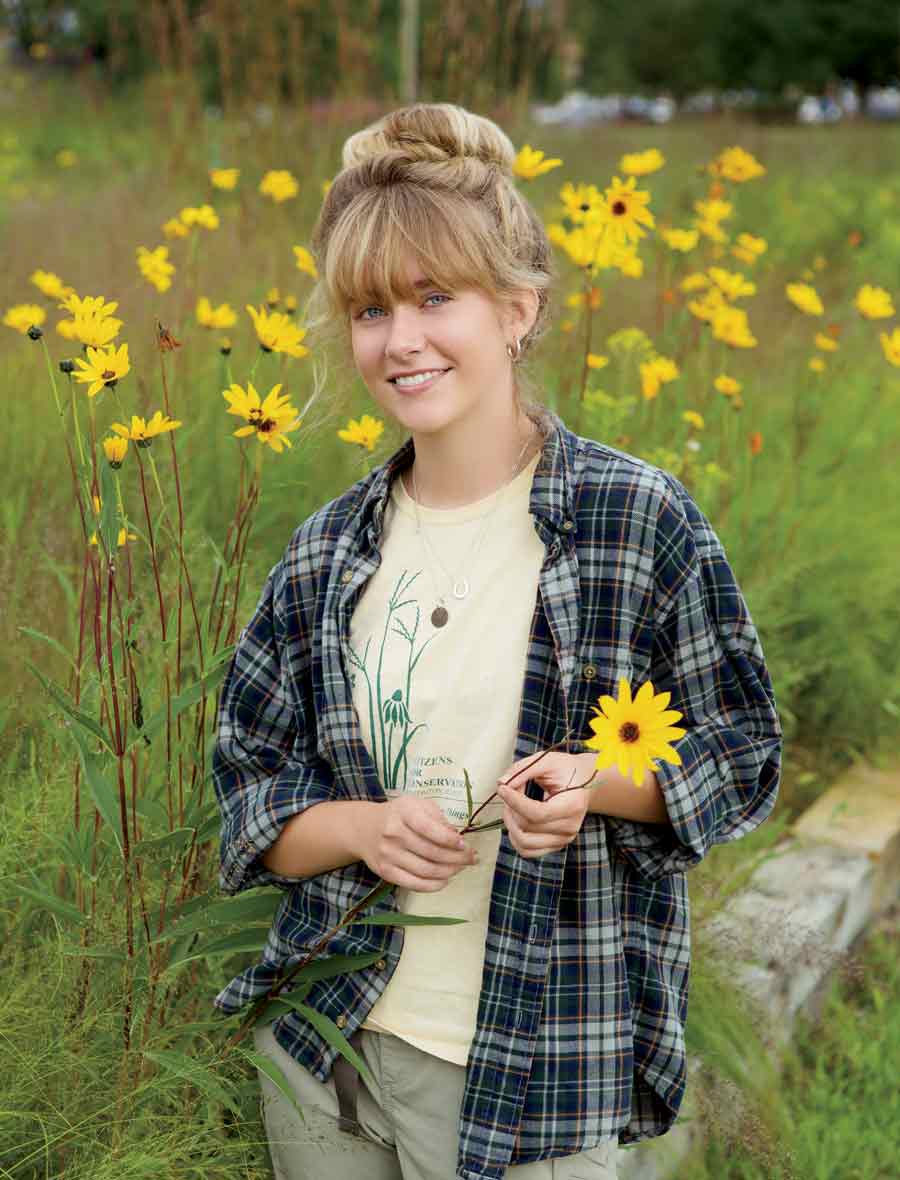 Barrington High School graduate Lizzy Hucker headed off to college this fall with an eye on a career that protects the planet Earth. Photography by Ian McLeod

Lizzy Hucker already has learned the first immutable lesson of the natural world: Life is transitory and surprisingly rare, so treasure what is precious in the now.

The future is an unpredictable expeditionary exploration. No guarantees.

So, be brave and go explore. The Barrington High School graduate will use that lesson — among many others — this fall as a freshman at the University of Wisconsin in Madison. She will launch what she plans will be a bachelor’s degree, masters, and eventually a doctorate in conservation biology.

Hucker has serious ambitions. She wants to repair a planet damaged by human indifference. She already has put that ambition in motion as a volunteer for Barrington’s Citizens for Conservation (CFC). CFC Is literally a grassroots organization designed to restore the land and train the explorer’s wildlife spirit.

As a Badger, she will be 120 miles up the yellow brick road from mom, Dr. Dympna Coll, a gynecologist/obstetrician at Advocate Good Shepherd Hospital and dad, Rick Hucker, a lawyer, raising Lizzy, plus her younger brother and sister.

She also must leave behind her best non-human friend. Nellie is a yearling Nelson’s Milk Snake to which she feeds deceased mice by hand. No, the stories about this red-and-black-ringed breed splurging milk from cows is an ancient but apparently false rural myth.

Mom will be in charge of Nellie for the next few years while Lizzy pursues her dreams. Mothers are amazing.

“My dream job would be reintroducing endangered species to their native ranges while educating the public on ways to coexist with wildlife,” Lizzy says. “I guess some goals … would be to take a stand for endangered species and also change how people take wildlife and the natural world for granted.”

It’s not hard to see that dream has been inspired by Barrington High AP biology teacher Erin Tantillo, and then nurtured by a friend she has lost.

When Barrington nature conservation mentor Tom Vanderpoel died suddenly on August 8, the heartache reverberated through the community and, even more intensely, the Citizens for Conservation family in which Hucker shared. He was 66, and was among the organization’s spiritual bedrocks for 40 years.

Barrington is famous for civics-based natural conservation devotion because of Vanderpoel, and fellow advocates like him. His life left a profound mark on Barrington’s landscape, both biological and spiritual.

Vanderpoel’s loss struck Hucker as an emotional thunderbolt, as it did the hundreds of young volunteers he had led and inspired over the years. But his death also imbued her with a refocused resolve. She was sure of her future before his passing, but now more committed than ever.

“I have learned so much from all of my fellow volunteers at CFC,” she said. “There is a strong sense of camaraderie between all the volunteers, and I feel really lucky to have become involved in such a competent and accomplished organization. Although it is hard to single anyone out, I would say that I learned the most from Tom and Gail Vanderpoel. Gail is a retired teacher who has used her own love of nature and gift of teaching to educate kids at CFC’s youth education camps. Her dedication to teaching is really inspiring.”

“Tom was so knowledgeable about everything from native birds to trees and he was always happy to share his knowledge with anyone who asked. Although I only knew Tom for three years, I am thankful for all that he taught me and am so grateful that I got the chance to know such a wonderful person.”

Hucker was always a lover of natural open spaces and encountering CFC’s ardent activism was a perfect fit. Plus, her family home is filled with plants she’s grown. This is her thing.

“In school the AP environmental science and horticulture classes were great because it showed me all the other students who believed in the same things I did,” she adds. “You could tell the teacher (Tantillo) was very passionate about the topic.”

“Ever since I was little, I was always drawn to nature. I was fascinated by wildlife and loved exploring the outdoors,” Hucker said. “As I grew older, I began to look for ways to put my interest in nature to use, which is when I began volunteering with Citizens for Conservation…since I began volunteering with CFC, conservation has become an important part of my life.”

She loves the 430 acres over 11 properties that CFC lovingly manages and reshapes to their ancient natural order. “The plant I love there most is the prairie trillium. I love where it grows in the woodland. It has three dappled leaves with a dark red flower.”

Plus, she adds for emphasis, “The area is full of snakes. I love them.”