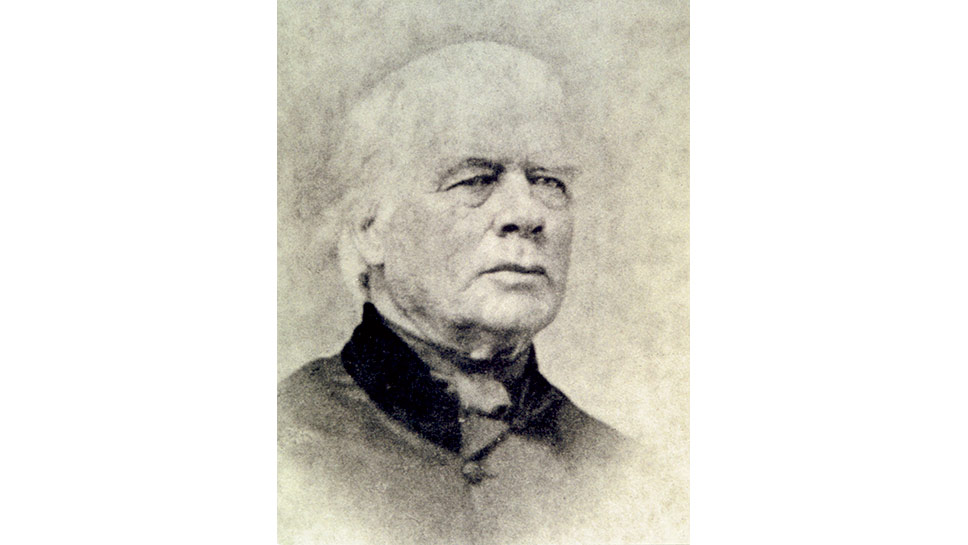 His nomenclature is all over Barrington but who was the real George Ela? An inquiry raises questions, and a latent mystery.

Ever wonder where the name Ela came from? Barrington has an Ela Road, an Ela Street, an Ela Township, an Ela-Vernon High School, an Ela Public Library, and an Ela Historical Society. The man behind the name served in every civic office from postmaster to police magistrate to state representative in the early part of the 19th century. He owned Barrington’s first grocery store, sold whiskey for 25 cents a gallon, and built what would become Barrington’s first commercial building. And they were all the same George Ela.

According to local history records, the one and only George Ela (he had no natural-born heirs) left New Hampshire in 1835 with $1,000 (a gift from his father) and headed west to Illinois. He invested several hundreds of his father’s dollars at the government land office in Chicago and gained title to more than 400 acres along Lake Cook Road west of Quentin Road. A few years later he moved to what is now Deer Park.

But who was this one man who left such an enduring legacy?

That’s a tantalizing mystery because, although active as a business entrepreneur, George Ela was not a writer of ideas or chronicler of personal exploits. There is no record he ever corresponded romantically to either of his wives—Mary or his eventual widow, Caroline.

“I think he kept his affections to himself,” says David Hammer, the pre-eminent Palatine historian who knows more about Ela than anyone around.

So we dove into The Vault and went hunting for the real George Ela. All paths lead to Hammer who has compiled a massive chronological dossier of his life. Hammer even re-enacted a civic-spirited Ela during Barrington’s Sesquicentennial.

“He was sturdy and rugged and honest, and able,” Hammer says. “Also frugal. He was a careful man and unpretentious. Overall an independent man. I believe these were virtues he learned at home (in New Hampshire). When you walk into the wilderness without a strong backbone, then nothing comes of anything you do.”

When Ela died on December 12, 1882, Hammer’s studies suggest everyone believed Ela was rich. But if the private Ela remains veiled even to an expert like Hammer, the financial magnate Ela is even more mysterious. Widow Caroline eventually claimed in court that his estate was worth only $1,500, all of which went to expenses. Even in 1882, that’s paltry pickings for a titan.

Ela left no will and spawned no heirs, thereby touching off an angry decade-long probate war between his widow and adopted daughter, Delia. Court filings suggest Delia believed George was rich and insinuated the widow Caroline was hiding the loot.

Delia’s attorneys couldn’t, and she eventually got nothing but hard feelings. Could Ela’s missing riches have been buried somewhere on his 400- acre farm 135 years ago?

“It was a great mystery even then,” Hammer says. “After owning so much, his estate was just a shadow of its former glory. There’s no good explanation, other than perhaps he wasn’t so careful as a businessman. Many people might have owed him money (from mortgage loans) but couldn’t pay.”

As to “buried treasure,” Hammer says that’s always attractive to Silas Marner hidden-gold buffs. “But very seldom does anyone ever do that. Plus, his little farm is mostly forest preserve land now, and the district would not allow anything to be taken out.”

Even his nuptial romances are unrevealing. Two years after his first wife died, he married Caroline from Chicago. Both had the same surname—Hazeltine. Were they sisters? Even Hammer doesn’t know.

The only truly revealing detail comes on page 656 of 1914’s Historical Encyclopedia of Illinois. It notes of staunchly Democrat partisan Ela: “He was a man of much force and marked ability. During the Civil War, he was once arrested for disloyalty, but on the appeal of loyal neighbors, he was speedily released. Thereafter, though not a staunch supporter of the administration, he was very discreet.”

Did Lincoln do something to peeve Ela? There is no documentation on record anywhere to indicate what this “disloyalty” may have been. What does remain is a name that secures one man’s legacy in the Barrington area for generations to come.