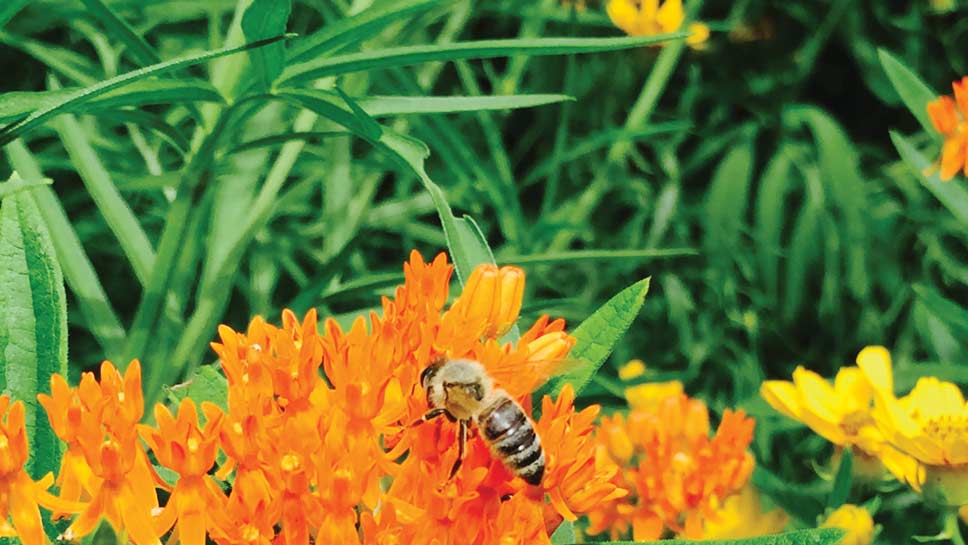 A little more than a decade ago, commercial and hobbyist honey beekeepers in the U.S. began noticing worker bees disappearing from their colonies, leaving behind the queen, eventually leading to the death of the hive.

The syndrome, known as colony collapse disorder, is a concern because honey bees are important pollinators of crops in the U.S.

The government and scientific organizations began searching for answers. The disorder has been linked to disease, pesticide poisoning, stress from transporting bees, habitat changes where the bees feed, or perhaps a combination of all of these.

It was an important awakening—a reminder that nature not only exists for its wonder and beauty, but also can provide humans with basic needs, such as food. One fact sometimes overlooked about the honey bee, Apis mellifera, however, is that this species is not native to the U.S. Latest genetic studies show that honey bees came from an ancient line of bees in Asia that nested in cavities, and were brought to Europe and Africa, where they quickly spread.

Eventually, they were brought to the U.S., where they also quickly spread.

Though humans have worked to control non-native species like buckthorn to maintain native ecosystems, it makes no sense to turn back the hands of time to a day when honey bees are not part of the avifauna of North America.

But the focus on honeybees needs to be widened to think about native bees.

These are in decline as well largely from habitat loss and pesticide use, according to Heather Holm, author of Pollinators of Native Plants. Scientists are discovering crops like blueberries are pollinated by native bees.

Just this year, the U.S. Fish and Wildlife Service listed a native bee—the rusty-patched bumblebee—as a federally endangered species. Its decline is linked to habitat loss and disturbance as well as diseases and pesticides.

The bee pollinates crops such as cranberries and apples as well as wildflowers, and has disappeared from 87 percent of its historic range, according to the Xerces Society. Scientists are blaming a fungus that came from Europe as well as habitat loss, pesticide use and climate change.

Historically common, the rusty-patched bumblebee is native to eastern North America including the Chicago and suburban region, typically found in parks and gardens as well as woodlands, grasslands, and agricultural fields.

Another group of native bees are the solitary bees, which don’t nest in colonies, but rather lay eggs singly in the ground. These are tiny bees that wouldn’t hurt a fly. Not a lot is known about these solitary bees, but scientists are learning that these bee species also help pollinate crops, trees and wild flowers—and their numbers are likely declining, too.

In spring 2015, the Obama administration created a plan to improve the health of bees and other pollinators. The continuation of that plan remains unknown. Meanwhile, Lake County residents are working to help native bees as well as honey bees. Different colony collapse disorder management techniques are being tested at the College of Lake County where a new apiary has recently been installed.

People can help save bees by creating appropriate habitat in their own spaces. Native bees forage at different times throughout the growing season, so planning a garden that blooms non-stop from spring through late fall makes sense.

About 40 percent of invertebrate pollinator species, including bees and butterflies, are facing extinction, according a United Nations report. It’s time we started paying attention to the bees.