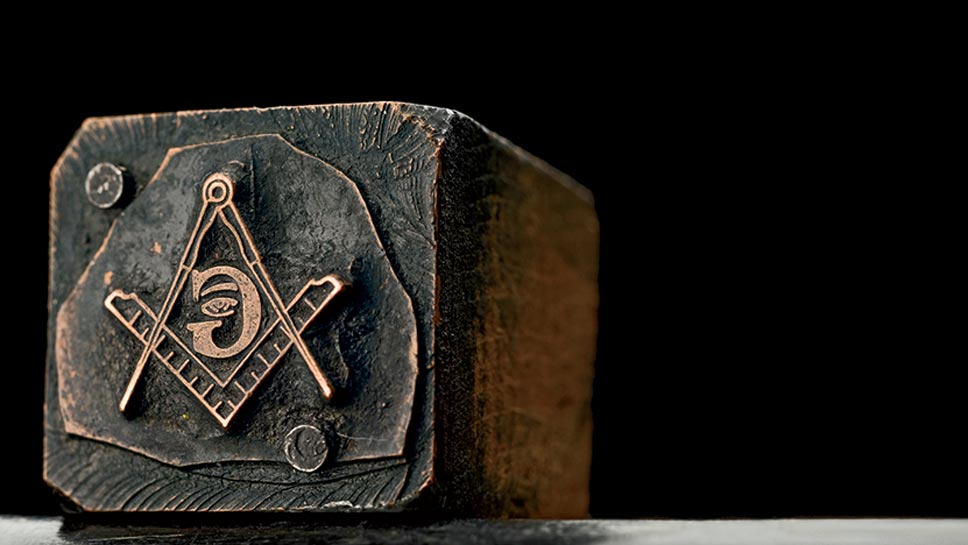 Is it a secret society? Does that Masonic symbol we all carry in our pockets on the dollar bill contain hidden clues about the universe? Were the Knights of Templar involved? None of the above actually. Founded in the 13th century, Freemasonry is the oldest, largest, and most charitable fraternity in the world. But throughout its storied and enigmatic history, Masonic structure and teachings have remained a mystery to many. Thus, a series of myths and misconceptions about the fraternity have arisen—some inspiring Hollywood movies and blockbuster novels. What we do know for a fact is that nearly every president of the United States has been involved in Freemasonry on some level, along with astronauts, world famous artists, painters, composers, musicians, and actors. Roy Rogers was a Mason, along with John Wayne, Johnny Cash, Harry Houdini, and Louis Armstrong. Who are these men, and why does this centuries-old fraternity of brotherhood mystify us still? With Barrington Mason Lodge No. 522 celebrating its 150th anniversary and the rededication of its Masonic Lodge on Cook Street, we embarked on an exclusive report about the profound impact Masons have had—and continue to have—on the village we share.

When the fraternity known as the Freemasons was founded in the middle ages, it was simply that—a group of free stonemasons who gathered together to use the tools of their craft to identify themselves as a band of brothers united for the common good. As such, the square and the compass became symbolic not only for their trade, but for what the images meant to the brotherhood’s devotion to the moral truths of service and self-improvement.

How Freemasonry evolved into such a staggeringly influential force over the centuries is not always clear. Some even connect early Masons to the infamous Knights Templar. What is clear is that for every Freemason you meet in the 21st century, there will likely be a deeply rooted story about how that allegiance came to be, and what the organization means to them.

Long-time Barrington Hills resident Richard J Stephenson—founder of the private merchant bank, International Capital & Management Company, and Cancer Treatment Centers of America—is a sixth-generation Mason, a 33rd Degree Scottish Rite Freemason, and a proud 44-year member of Barrington Lodge No. 522. He still remembers the day he asked his father about the group, which as a youngster, seemed mysterious and almost otherworldly.

“I said ‘Dad, tell me more about that ring you wear’,” says Stephenson in an exclusive interview with Country magazine earlier this summer. “Is it a secret society?”

“No,” his father gently told him. “I’m a Freemason, and it’s a private organization, not secret, with a mission to do things that improve the prior condition of men.” For an 18-year-old, it was daunting to hear.

“In my smart-alecky way, I said something to the effect of ‘oh Dad, I’m not going to be interested in joining a secret society,” Stephenson says, adding: “My father passed away before I became a Freemason. There may have been many regrets my father harbored about me, but the inability to see clearly enough the light that awaited me when I joined his esteemed fraternity would surely be at the top of that list.”

Part of that light was knowledge. It was discovering all the work the Masons have done over the centuries to uphold a moral code and create a culture of liberty for all. Stephenson, who describes himself as a Libertarian, says the process of unlocking the mysteries of Masonic culture was personally transformative.

“Men don’t go to war. States go to war. Men get into struggles and disagreements but they don’t wander far from where their families lie,” he explains. “So the Masons began to think about these things in the context of their world, and began to strive toward liberty.”

It is no wonder then that so many iconic documents and symbols for liberty in the United States alone have some tie to Freemasonry-from the U.S. Constitution to Mount Rushmore to the Statue of Liberty (designed by artist, sculptor, and Freemason Frederic August Bartholdi). George Washington was a Mason, as were 15 signers of the Declaration of Independence and 28 signers of the Constitution—including John Hancock himself. So was Gustav Eiffel, who in addition to his famous tower in Paris, built the Statue of Liberty as a gift from the French Freemasons to the people of New York.

What Stephenson finds most fascinating about the Eiffel story is that government officials at the time didn’t even want to accept a statue that is now an icon for all that America stands for.

“But it wasn’t intended by the Freemason folks to be for the government. It was for the people,” he explains, recounting the tale about how fellow Mason Joseph Pulitzer help fund a permanent pedestal for the statue through an 1886 “penny drive” in his New York Times newspaper. “He said to the youth of America, if you send me a penny, we’ll save up money over time. In exchange for you sending me the penny, I will print your name on the front page of the newspaper.”

That kind of service for the greater good is an example of what Masons have done, and continue to do today.

“Freemasons have been the community glue in every little hamlet of this country, operating faithfully to the moral code and taking care of their communities for centuries,” says Stephenson. “Barrington Lodge No. 522 does just that here in our village, contributing quietly and without fanfare. From the football field to the Barrington White House, we are out there meeting the needs of people in the community.”

Bob Mayo, a long-time member of the Barrington Lodge who worked with Stephenson at the CTCA before retiring in 2015, says that becoming a Freemason has had a “significant impact” on his life.

“I have been the recipient of many simple acts of kindness by members of this brotherhood,” says Mayo, explaining how he followed in his Catholic father’s footsteps to join the fraternity. “Conversely, I have reciprocated with efforts to make other people’s lives or their environment better.”

“My grandfather was very involved in San Diego and that was really my first exposure to it,” says Sauer. “When I reflect on it, I first think of my grandfather being involved. But the more I get to know about this brotherhood, I realize this is the way he conducted his life and it’s the way that a gentleman should conduct his life.”

The symbol-laden tenets of Freemasonry promote that brothers should meet “on the level,” act “by the plumb,” and part “upon the square.”

“Being honest, humble, trustworthy, and straightforward with your brothers and with humanity is what it’s all about. That’s something we need more of in the world today,” adds Sauer, who says he is impressed by the number of young members joining Barrington Lodge No. 522. “I’ve been involved in many service organizations and this is one of the first that has attracted men in their 20s who are younger than me. These are people who want a brotherhood that makes you a better man. It is very enriching for me to see that in my generation, men who hold each other accountable and are servant leaders in their own way—in business and other capacities connecting and meeting on the level.”

As part of Barrington Lodge No. 522’s 150th anniversary celebration, Sauer had the Illinois House of Representatives craft a special certificate of recognition to be presented to the Lodge to commemorate this milestone. He recently presented that dedication to brother Peter J. Curielli, who serves as assistant secretary.

Peter Yankala, owner of Phillips Men’s Wear, Barrington Lodge member, and unofficial photographer for the brotherhood, says he is humbled by the group’s history.

Because while world-famous figures like George Washington and Benjamin Franklin were Masons, so were some of Barrington’s founding fathers—including George Ela, Arnett C. Lines, and Wright R. Catlow, who brought Catlow Theater to the village in the 1920s. The Barrington Lodge has also counted prominent businessmen among its ranks, including Michael H. Miller of M.J. Miller Jewelers; Jon C. Stickney, Sr., president of Barrington Bank and Trust; and the late William R. Rose, owner of Rose Packing Company.

“One hundred-fifty years of community service in Barrington that started out with a few members named Catlow, Ela, and Lageshulte has quietly grown to donate and fund programs in the community along with state and local initiatives,” says Yankala. “It’s a proud tradition.”

For Stephenson, the journey continues as his own sons and son-in-law have joined the ranks of Freemasons around the world, making them the 7th generation to uphold the values of Freemason doctrine.

And clearly, he no longer thinks of Masonry as some cryptic, obsolete “secret society.”

“Freemasons are not only the largest organization among men, but also the most philanthropic in the history of the world. Nationwide, the lodge structures provide $3 million a day, 365 days a year, as a part of our official Masonic activities, and the members give much more,” he says, adding, “We are servant leaders, and we are moral code bound. We improve ourselves, our families, and our communities.” 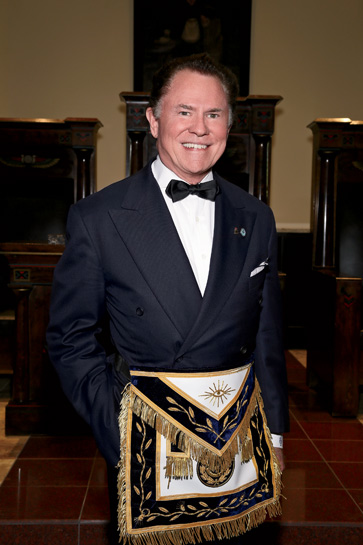 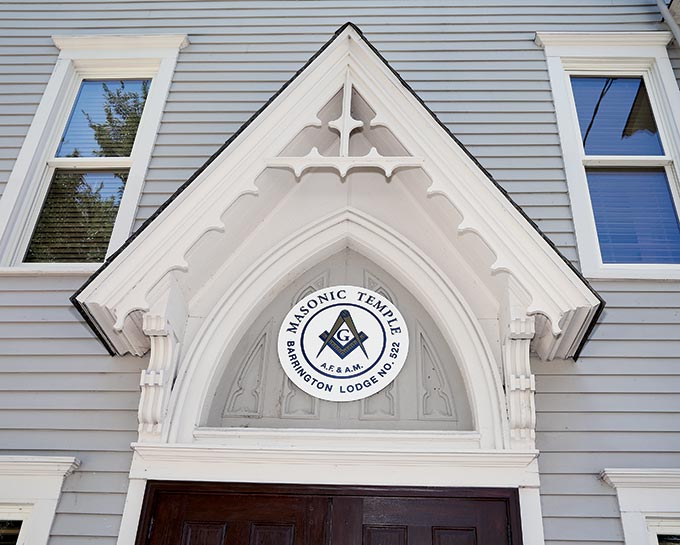