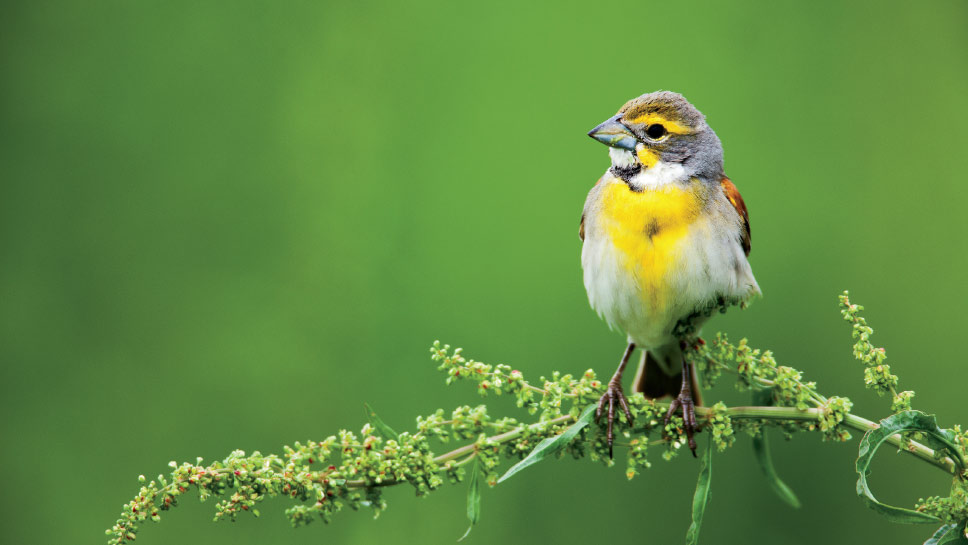 The elusive dicksissel keeps birders guessing when it will make its seasonal appearances in the prairie.

For many migrant birds that nest in the Barrington area, it’s easy to predict where and when they’ll appear for their annual sojourn. Year after year, different habitats attract the species associated with them. Great egrets, great blue herons, and red-winged blackbirds return to wetlands. Brown thrashers, gray catbirds, eastern towhees come back to shrub lands. Eastern pewees, blue-gray gnatcatchers, scarlet tanagers reclaim breeding territories in oak woodlands, while bobolinks, meadowlarks, and Savannah sparrows do the same in prairies.

One grassland species, however, defies forecast for its breeding ground. The dickcissel (Spiza americana)—definitely a member of the prairie bird tribe—keeps birders guessing about where it will nest each year and when it will show up. I remember the excitement I felt several years ago when a handful of dickcissels nested in the prairie restoration near our home. I expected they would round out the prairie bird population that graces that site every summer.

But although one or two showed up briefly and gave me hope, they did not nest there again. I have heard similar stories from birder friends.

One local site that has attracted nesting dickcissels more often than not is Galloping Hill, located just north of Penny Road and part of Cook County’s Spring Creek Preserve. On a scheduled bird walk there June 9, I mentioned the possibility of dickcissel sightings as we gathered in the parking lot beforehand, adding that I had not heard them a week earlier. But as soon as we crossed Penny Road, we heard the unmistakable strong stutter of a dickcissel and soon had it dialed up in the telescope. By the end of the walk we had seen and heard a dozen or more of the striking birds, chattering away from plant stalk tops.

The dickcissel looks a bit like a small eastern meadowlark. It sports the same colors but in different arrangement and intensity. Like the meadowlark, the male dickcissel has a black V on a yellow breast, though the V is not so neatly defined as the meadowlark’s and the yellow is not so brilliant and widespread.

Nonetheless the dickcissel is a handsome bird, with chestnut wing patches, a strong white and yellow eyebrow, and stout gray bill. It always strikes me as a confident bird, even an exhibitionist, as it perches atop plant stalks and belts out its ch-ch-ch-ch! While the meadowlark presents a more horizontal, pointed profile, the dickcissel stands upright and seems to stretch as it vocalizes.

Unlike most grassland birds that make their nests on the ground, the dickcissel fashions its nest just above the ground or in a small tree. It has a fairly wide tolerance for grassy habitat of all kinds—hay meadows, prairies, roadsides, pastures. Also unlike bobolinks, Henslow’s sparrows, grasshopper sparrows, and eastern meadowlarks, the dickcissel has not seen precipitous decline in its numbers.

It seems reasonable to look for dickcissels in non-urban places. But last summer, I was riding a bike south from McCormick Center on the Chicago lakefront and heard the familiar chatter; soon I was spotting dickcissels in all directions and on a July hike watched parents feeding young, right in view of the Chicago skyline.

I became aware of locally breeding dickcissels only five to 10 years ago. Every summer I anticipate their appearance but never know for sure where they will pop up. It’s clear that a good number of them have established breeding territories at Galloping Hill this year.

So if you’d like to see this unpredictable summertime visitor from Central and South America, that’s a good place to visit with binoculars in the next few weeks.