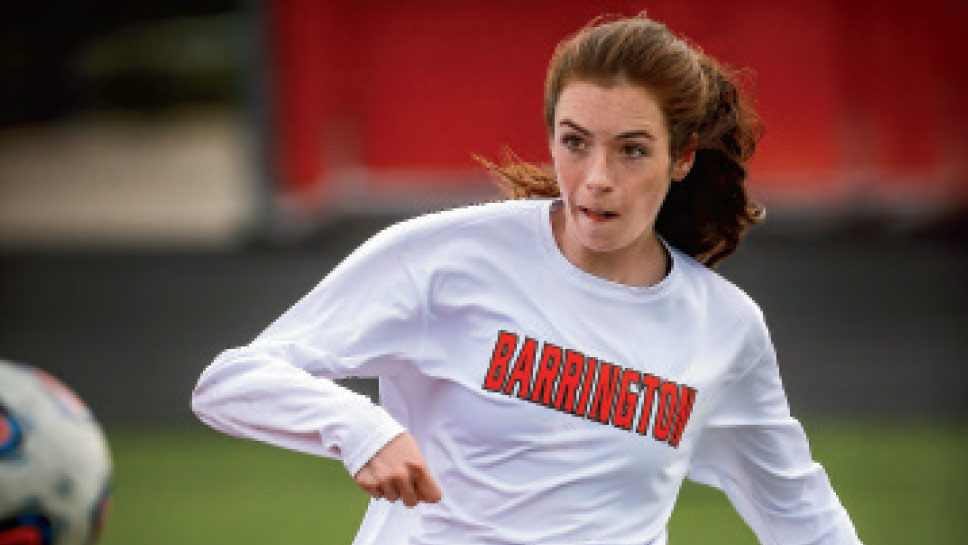 Start with their training.

Batliner often runs with older sister Becca, a cross country and track athlete for the University of Missouri. Sometimes they’re joined by their sister and three brothers.

During her offseason, Spinell goes on runs spanning five to seven miles—just for fun.

“I’ve always been interested in running a marathon,” Spinell says. “Definitely in the future, when I’m not really playing soccer anymore, I could better prepare.”

This marks the end of their long journey as soccer teammates. They and several other Fillies have been together since age 10 with the FCX Soccer Club. Batliner will play at DePaul University and Spinell at Miami University in Ohio.

“Our games are a lot different but very similar in a way. We both bring a lot of energy. We like to run a lot,” Batliner says. “It’s crazy to think about. We’ve been teammates from fourth grade along with a lot of the other girls, which helps a lot with team chemistry.”

Although usually on opposite sides of the field, they often find ways to connect.

Spinell plays outside midfielder and has a knack to make the most with restarts. Sometimes the recipient is Batliner, an outside defender who isn’t shy to join the attack or get her head on a cross.

They are part of a veteran group that captured third in state in 2015 and sectional titles as juniors and freshmen.

“I think (Batliner) is one of the best right backs in the state of Illinois. There’s nobody I’ve seen really get up and down the field like her,” Barrington coach Ryan Stengren says. “Spinell has really earned everything’s she’s gotten. She was good as a sophomore, made incremental steps junior year, and now she’s fantastic.”

“I got right out of it as soon as I could,” Spinell explains.

Spinell began as a forward but gravitated to outside midfield to capitalize on her running forte. Batliner plays center midfield for FCX but has primarily remained on the back line.

“That’s kind of just where I was placed,” says Batliner. “I love running so on the outside I can still get up into the attack and just play lock-down defense as well, both aspects.”

They’re also invaluable leaders. Last season’s 1-0 super-sectional loss to Huntley only fueled the seniors’ determination. The official pre-season started Feb. 27, but they helped the players organize training on their own.

They began in November.

“Batliner and Spinell command attention of the team. It’s really like having assistant coaches around,” Stengren says. “They talk to the team a lot.

They know the vibe. I ask them repeatedly to take care of things. They help create the culture and mindset that we have.”

Attendance was never an issue. The Fillies even added speed and agility training with Kevin Barcal, founder of Breakaway Athletic Training. Spinell has trained “religiously” with Barcal since she was 8.

“Everyone was dedicated. Everyone stayed committed. It was very easy to gather more and more to do it,” Spinell says. “It’s obviously helping with explosiveness, speed, and endurance.”

When extra motivation is necessary, they only need look at their wrists and the initials GFG—Goals for Gramps.

Bob Steib died Nov. 1, 2015—one day after his 84th birthday—after being diagnosed with mesothelioma in 2010.

“That’s one of my favorite memories because he was so positive and always made you feel so special,” Batliner says. “Before every game we write GFG with permanent marker just as a visual reminder that’s how we want to play.”

Batliner verbally committed to DePaul as a sophomore. She wanted to remain local and likes the business school. Two brothers also live in Chicago. Spinell has two older sisters who attended Miami. She regularly visited the school watching her cousin play for the men’s hockey team.

On and off the soccer field, their runs of success should continue.

“You’re actually running for a purpose (in soccer), to try and score goals,” Batliner says. “It’s taught me how to be a leader and social skills because it’s a lot of communication. It’s definitely played a role in shaping who I am.”

“I’ve really developed my character through soccer,” Spinell said. “I’ve learned to work with other people. Most of all, it’s created a work ethic and drive to want to accomplish things.”