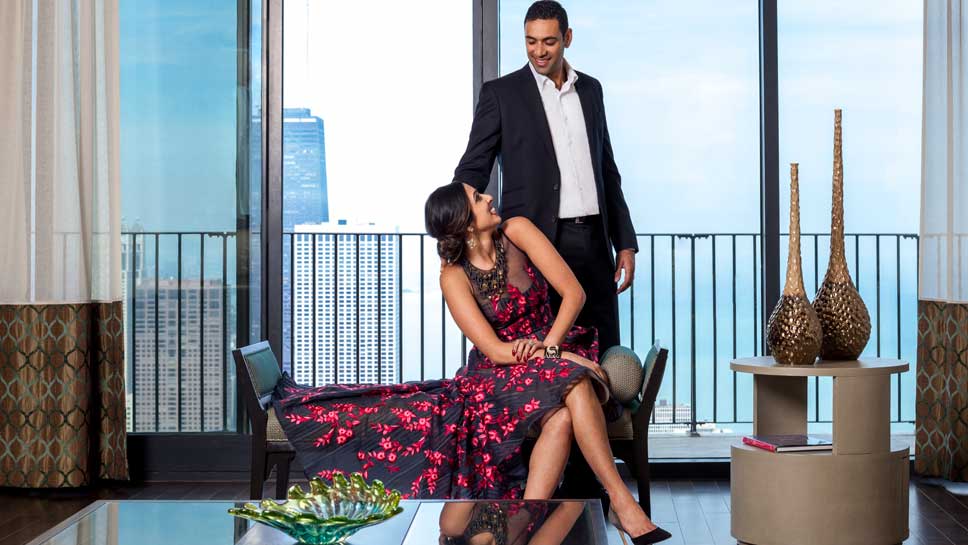 Badal and Sonia Shah in the family penthouse. Sonia is wearing a gown by Marchesa Norte, available at Neiman Marcus. Photography by Frank Ishman/Makeup by Kelly La Banco/Styling by Theresa Alleva/Hair by Jamine Bruessard

Sonia was 8, and still a little bit shy, when her family moved to South Barrington. Shortly thereafter, she began attending Grove Avenue Elementary and made new friends in the neighborhood. It was then that she met the boy next door.

“It was ever so convenient to be living next door to a charming, handsome Indian boy,” gushes Sonia Shah in a recent interview, just weeks before celebrating a 10-year wedding anniversary with that “boy next door.”

“We spent our formative years in South Barrington, and I realized I had a crush on him by the time we got to 8th grade,” she says.

On the hazy spring morning that we met Sonia, she was at the Shah family’s penthouse in the Aqua building in downtown Chicago. She and husband Badal also own a townhouse in this building as they divide their time between life in Barrington Hills and his business in the city.

We welcomed the opportunity to showcase some of the hottest town and country looks for summer, as seen on these pages. But we also couldn’t resist hearing more about the couple’s love story, and how close family ties and the South Barrington community resulted in a happily ever after ending little girls only dream of.

Pardeep and Sushma Bhanot moved Sonia and her three siblings to South Barrington in 1991. She was the middle child, with an older sister, Rina; a younger sister, Shelly; and brother Jay. Badal was also the second born in his family with an older brother, Aakash.

“We had a lot of classes together and even shared the same fifth grade teacher,” Sonia recalls. “He teased me a lot in middle school. I realized I had feelings for him when he didn’t ask me to the 8th grade dance, something I’ll never let him forget.”

“I didn’t know she wanted to go!” he protested affectionately when he stopped by the penthouse on a lunch break. Our shoot took place just days after selling his business TurboAppeal to Paradigm Tax Group.

Sonia says one of the things that made them close then—and effectively cemented their union for life—is the close relationship between the two families.

“They have always been very close friends, which made everything easier,” Sonia explains.

So how did they go from childhood sweethearts to power couple with two adorable children?

It’s a story straight out of Hollywood.

“The first time he asked me to be his girlfriend, it was freshman year of high school,” Sonia explains,

The couple dated on and off throughout their years at Barrington High School but parted ways when they went off to college.

“We went to separate schools but stayed in touch the entire time,” Sonia explains. “We quickly realized that distance made the heart grow fonder.”

As soon as Badal got back to the Chicago area, they started dating again, and things moved quickly from there. In fact, he soon began dropping clues.

Sonia Shah enjoys a penthouse view in a Rosie Assoulin melted rainbows skirt, available at Chalk in Evanston, paired with a tank by VINCE and necklace by Oscar de la Renta, both available at Neiman Marcus.

“He took me on a week-long scavenger hunt with one clue leading to the next,” Sonia explains. “He faked me out a few times, but eventually proposed on the boardwalk by the Shedd Aquarium, overlooking the Chicago skyline. The boardwalk is significant to our relationship because it was the first place we ever talked about a future together. We were just 17 then!”

The couple was married June 30, 2007 at the Renaissance Hotel in Schaumburg with nearly 600 people in attendance. It was a fairy tale day for Sonia.

“My favorite moment was hiding and watching him come in on a white horse,” she says. “It had been such a long time coming. Seeing him reminded me how right it felt to be taking the next step as husband and wife.”

Today, a decade into their marriage and two children later, Sonia and Badal Shah still spend quite a bit of time gazing at the Chicago skyline from the very same boardwalk where their love story began in marriage.

But they are also busier than ever. 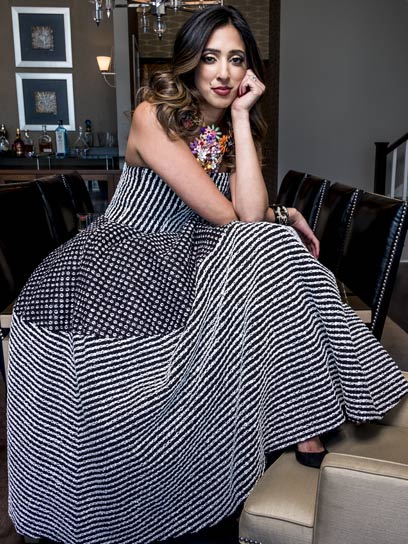 Sonia Shah’s strapless gown is by Christian Siriano and her necklace is Preen by Thornton Bregazzi, both available at Chalk in Glencoe.

“This creative outlet could not have come at a better time for me as my children are both in school full-time now, and I have ideas that are unique to me and my experience,” she explains. “After years of listening to others share their stories, lessons learned, and experiences, my sister, best friend, and I pulled together a team of diverse women who are all experts in their own right to tap into all aspects of being a woman. We have brainy chicks, trendy chicks, party chicks, beauty chicks, and savvy chicks. There really is something for every woman.”

Meanwhile, Badal’s May sale of TurboAppeal to Paradigm has him now joining the executive team as chief marketing officer.

“He is excited about the opportunity as a national market leader to support more homeowners and commercial property owners with their appeals across the nation,” Sonia explains. “Badal’s role will focus on expanding the TurboAppeal brand while also positioning Paradigm as a tech-enabled service provider, the only such firm in the nation.”

These activities mean the Shah family is spending more time in town than country lately. However, Sonia says that could all change when the children get older.

“We share so many fond memories of Barrington,” she adds. “It’s absolutely a place we would raise our children.”

From the outside looking in, the couple appears to have the perfect relationship, but nothing comes without hard work. What keeps them happy together after all these years?

“Communication,” she adds. “And always having each other’s back.”