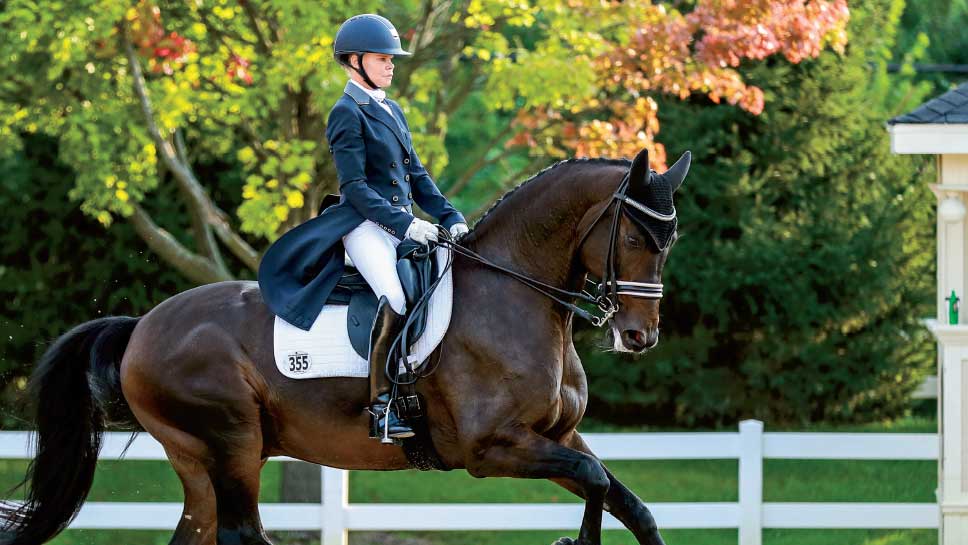 How Barrington Hills resident Adrienne Pot and her horse Something Special defied the odds—and a fear of music—to win the Midwest Regional Grand Prix. PHOTOGRAPHY BY JOHN BORYS

On September 24 of last year, Barrington Hills rider Adrienne Pot directed her 17-year-old gelding, Something Special, onto the manicured grounds of Lamplight Equestrian Center in Wayne, Illinois to participate in one of the most celebrated equestrian competitions in the Midwest: the U.S. Dressage Foundation Region 2 Championships.

She sat tall in her saddle, almost impossibly linear and straight, as she had countless times before in competitions just like these. Over the years, Pot had taken home multiple regional championships as well as Grand Prix national wins, the latter representing the pinnacle of the sport. She had never, however, won a regional Grand Prix championship before. Neither, it should be noted, had her horse, Something Special. But something felt different this time. Getting to a regional dressage championship is no easy task. The events bring together the best qualifying horses and riders to compete for top honors and national rankings.

Although winning this competition wouldn’t represent the apex of her career, it did have special meaning to Pot—not only because of where she, herself, had come from but what she’d gone through with her horse to get here.

It takes many years to train a horse to compete for a Grand Prix. But that’s precisely what Adrienne Pot has dedicated herself to doing since she was 13 years old.

Dressage is, after all, a unique sport. It’s ballet on horseback. Most people have glimpsed elements of dressage even if they haven’t recognized its formal name, as performances by the Spanish Riding School in Vienna, Austria, with their elegant white Lipizzan stallions, is an example of classical dressage. In more formal terms, dressage is a competition in which judges evaluate the systematic progression of the balance and agility that a horse can achieve. It is divided into various levels, culminating in the need for a horse to perform difficult movements and figures.

Each movement or transition between movements is given a score between zero and 10, with 10 being the highest score. Musical freestyle dressage is divided into levels as well, but the rider is given artistic license to show them in any order as long as specific requirements are fulfilled. In this way, the horse and rider can show off their skills and enhance the performance with the music of their choice. Much like in figure skating, the music should set the stage, mood, and personality of the combination—with both the rider and the horse flowing in rhythm to the music.

The first time that Pot met her future dressage partner, the 17-year-old gelding, Something Special C, she knew she’d met a horse brimming with potential. There was something in the way that Something Special C carried himself —he had very expressive gaits and his hind leg, particularly at the canter, was amazing and expressive, with great scope and reach— that made her think this horse might be ribbon material. He was a Dutch Warmblood gelding from the Barrington Hills stable of James and Elizabeth Bramsen, a horse that looked, physically speaking, like it belonged in the winner’s circle.

A mahogany bay, with promenade dabbles on his hindquarters, Something Special was an elegant horse with a very sleek body style, bright eyes, and an intelligent expression.  When Pot climbed aboard Something Special, things felt right. The horse allowed himself to be guided, to connect with his rider, which is essential in any dressage competition. He had an elastic quality to his movements, which instantly drew people’s attention whenever he was in motion.

And yet Something Special possessed one major weakness. He was deathly afraid of music. Pot, however, believed it was a handicap that could be overcome, as she’d been working with horses since she was young.

She’d received her first horse, purchased for her by her father, when she turned 13 years old. She wanted a fire-breathing steed, but he got her a horse that, in his words, “wouldn’t kill her.” Never mind, she thought to herself, “This is my horse.”

Pot had a spirit of her own back then and was known to tie binder twine like a bridle on a horse and jump them over water troughs. It was enough to scare any adult, but she was having fun and showing real potential as a rider. In the process, she learned how different horses think and how to properly gain their trust so that both could gallop forward toward new adventures and competitions with confidence and enthusiasm.

Meredith Manor in Virginia provided her formal education in equine management and training, which proved to be a springboard to her dressage career. In time, she would purchase a mare named Aspen, who she trained and competed with. Aspen was not only a top mover in dressage but produced several foals for Pot and her husband, Rick Geissler. This mare would hold such a special place in Pot’s heart that she’d name her home in Barrington Hills “Aspen Manor” in her honor.

Some very special horses helped Adrienne along this journey, including Gawalt, Chicago, and R-tistik (to name just a few). But she knew there was something equally unique about Something Special as well.

In order to soothe the horse’s nerves in regards to the sounds of music, Pot worked with Something Special all winter and summer. Pot and her team started playing music very softly outside his stall at feeding time, when he received his daily carrots. Then they slowly raised the stakes, playing music when he was groomed and then very quietly when he was working. If Pot and her team sensed even the slightest flinch of fear or apprehension, the music was instantly turned off. Eventually, Pot was able to slowly increase the volume up to competition level.

He was—and to some degree still is—very suspicious of other music and very sensitive to sound. During his normal schooling his ears were uncovered, but during the completion, Pot and her team decided that he should wear a noise-cancelling ear bonnet to help him concentrate.
Meanwhile, Pot worked closely with Something Special like she had with other horses: The challenge was to develop and show proficiency using invisible aids as much as possible (legs/seat /hands) to enhance the natural beauty, athleticism and power of Something Special’s natural gait.

Choreography in freestyle dressage is of utmost importance for a high score. The rider guides the horse across and around the arena through highly trained movements set in time to music. The horse’s footfalls must move in time to the beat of the chosen music. Listening to the rider’s aides, the horse must “dance” through the competition, moving along curved and straight lines at a walk, trot, and canter, sometimes crossing sideways at steep angels and changing direction when the music changes.

In time, the two were able to achieve the type of fluidity and mutual trust that is needed to compete in the Grand Prix—and became true partners, an inspiration to watch.

When Pot and Something Special began their traditional dressage routine at the regional Grand Prix in September, they had a feeling that a good day lay ahead, but the more music rich freestyle still lay in the future. The duo’s freestyle routine had been choreographed and designed by Karen Robinson using music from the movie The Grand Budapest Hotel. The choice of music held special meeting to Pot as she’d first heard the score while watching the film with the gelding’s owner, Elizabeth Bramsen.

There were concerns, of course, as Something Special had a tendency to want to piaffe (trotting on the spot) right away, but during a freestyle, a halt is required at the outset of the program. 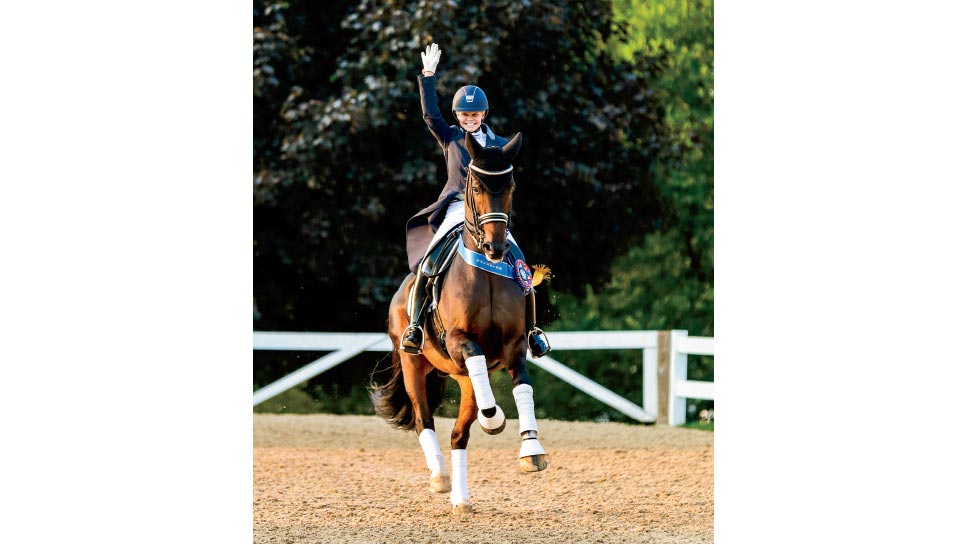 “It took an endless amount of practice to halt him in his regular work,” says Pot. “He wanted to start dancing (piaffing) right away. It took lots of praise to achieve this with the music playing. That was my only worry as I went into this competition. I knew if he halted, we had it!“

During the Grand Prix, Something Special proved his rider correct. As music from The Grand Budapest Hotel soundtrack crackled to life—a selection that included cuts from Alexandre Desplat’s pieces “Mr Moustafa,” “A Prayer for Madame D,” and “Night Train to Nebelsbad,” Something Special moved in perfect time with the music. He created rhythmic moves during the passage and pirouette stages. When the awards ceremonies commenced at dusk, horse and rider enjoyed a double victory, winning both the Grand Prix and the Grand Prix Freestyle.

In the end, Pot’s response was to reflect attention back to her horse. “I have been honored to ride such an athletic, talented and ‘special’ horse,” said Pot. “I am looking forward to more competition in the future. This sport is a never-ending challenge in the pursuit of perfection. And of course, we are in it for the love of horses!”

In the future, Pot hopes one day to join a United States team and vie for the gold on one of equestrian’s biggest international stages, but her more immediate events lie in the Midwest. Look for her at the 2017 Regional Dressage Young and Developing Horse Dressage Championships at Lamplight Equestrian Center on August 24-27 and at the Regional Dressage Championship in Batavia, Ohio, on September 14-17.