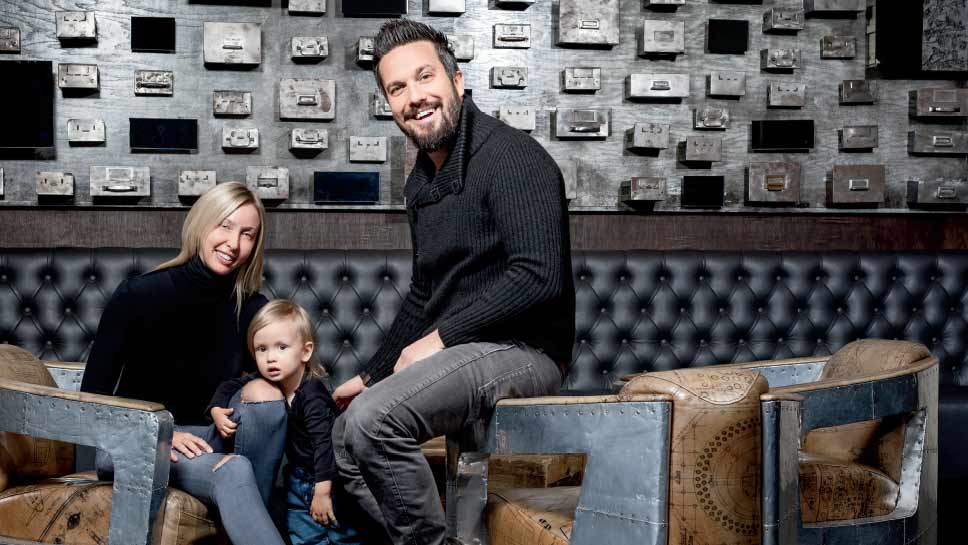 When Top Chef finalist Fabio Viviani met Barrington native Ashley Jung, it was love at first sight. Today, the happy couple is putting down roots in the community she grew up in—one he says reminds him of his native Tuscany. PHOTOGRAPHY BY FRANK ISHMAN

You’d think that any love story involving Fabio Viviani—the Top Chef “season five” contest who began attracting the attention of female foodies from coast to coast in 2008—would have to be achingly Italian. There’s bound to be, you figure, some scene that plays out beneath a Veronese balcony. Or some meet-cute by the Trevi Fountain. Or a proposal, on bended knee, under the Tuscan sun.

This is a guy, after all, who looks like he can trace his bloodlines straight back to the Montagues and wields that raffish Old World grin of his like it was a Venetian stiletto.

He’s built a national following by talking about romantic things in romantic ways. He doesn’t just talk about Italian cooking; he rhapsodizes about it. Nor does he seem to have a problem, either in interviews or TV, occasionally letting his ego run free. Whenever he makes something it’s bound to be described as the best—the best meatballs, the best cheeseburger, the best piece of cheese. But he also projects a certain old-fashioned fearlessness in taking risks.

Which might explain why he decided to catch a flight from Italy to the United States on September 20, 2005, even though he’d already built something of an empire of restaurants back home. And why he’s managed in less than a decade in transforming himself into a one-man culinary brand, complete with 16 restaurants, a production company, and his own wine label.

So it might come as a surprise that when he first laid eyes on Ashley Jung—a successful real estate agent from Barrington—words absolutely failed him. They’d first crossed paths at a cookbook-signing event in 2009, at a time when both he and Ashley were unavailable. Then came a few interactions along the Chicago event circuit before his first big chance, when he spied Jung from across the room at a mutual friend’s party in 2013.

“She was tall, blonde, beautiful,” says Viviani. “I said to myself, ‘This girl is out of my league.’”

But then, in typical Italian fashion, bashfulness turned to brashness and soon he was giving himself an impassioned pep talk as to why he was worthy of a discussion.

“I have an accent. I can cook. And,” he told himself triumphantly. “I’m from Italy!”

Once the conversation began, it never stopped. “We just clicked,” says Jung. There was one problem, however, which Jung wanted to address right away. Fabio was living in California at the time, irregularly dropping into Chicago to scout for new restaurant locations. Was he actually thinking about moving here?” Jung asked.

A bit of an Italian white lie perhaps, but Jung got the point. “I actually decided to move here literally 17 minutes into the conversation,” says Viviani. “I was star struck.”

Fortunately, the initial challenges of a long-distance relationship didn’t phase either party. “Both of us are very busy people with so many different things going on,” says Jung, “so it wasn’t an issue for us. It was like a honeymoon every time we saw each other, and when we were apart, we were texting and calling each other.”

But when Viviani decided to move to Chicago in 2013, there was the question of where they would live.

This much was certain: Jung didn’t want to leave Barrington.

She’d been born and raised in the area, as had been her father before her. When her father passed away 22 years ago, Jung’s mother stepped up and took over the reins of the family real-estate business. And now that her mom was suffering from the devastating effects of ALS, Ashley not only felt a pull to keep her family’s business alive but to take care of her ailing mother at home in Barrington, a place where she could find peace and comfort.

Although Jung talked up the practical merits of Barrington to Viviani, including its natural beauty and its proximity to the expressway and airport, she didn’t quite know what to expect until he visited the area. But when Viviani got a look at the place, he was immediately struck by how much the open spaces and natural grandeur of the area reminded him of an American version of his native Tuscany. “There’s nothing like being able to walk out your house and see fields and land. For me living downtown is half of a nightmare because I work downtown. I want to live in a place where I can rest in peace.”

And thus in 2013, Viviani packed up his things and moved in with Jung. Although both were extraordinarily busy with their respective careers, the more Jung spent time with her new love the more she realized how different the public Viviani was from the private Viviani.

If on TV, he’s an unabashed culatello ham, who seems not only at gravitate towards the limelight but thrive in it, at home he appears to be the complete opposite. Mellow. Quiet. And dare it be said? Downright obliging.

“It’s become kind of a joke but he never says, ‘no’ to me. If I need to go out with my girlfriends, he says, “Go and have fun.’ If I need to do something for the business, he says, ‘I’ll take care of things.’

Sure, he remains the top toque in the family kitchen, who is capable, Jung says, of whipping up miraculous meals with only the slimmest of ingredients. But there’s never been, from day one, any kind of artificial fawning about his cooking. If it’s good, Jung says so. If it needs some salt or the dish seems a little one note, she’ll tell it like it is.

“About 99 percent of the things he makes are amazing,” says Jung, who is still blissfully head-over-heals in love with his lemon chicken, “but I’m a tough sell. I’m not afraid to give him a few pointers when he needs them.”

What Viviani hadn’t worked up the courage to do, until 2015, was formally propose. Even though they’d both been married before, he wanted to declare his feelings for her in some kind of memorable way. So he did something only Fabio Viviani would do. He wrote her a poem—he calls it a “rant”—filled with inside jokes about their relationship.

“It was terrible,” says Viviani. “Probably I would have failed at the poem test but who cares? It was cute; she liked it. She said yes. That’s all that matters. She was charmed by the accent. How could you resist the accent? Impossible.”

Soon thereafter came the couple’s first child, Gage, who changed both of Jung and Viviani’s life for the better and further validated their decision to live in Barrington. “I like the fact that my son can play in the grass,” says Viviani.

And although Jung is the primary caregiver for little Gage—“she’s the best that I could ever ask for,” says Viviani—Ashley has been surprised at how hand’s-on Fabio has become with his little one. “He’s very modern. Whenever he is at home, he takes care of the baby 100 percent of the time. He’s very accommodating.”

But baby duties haven’t stopped Viviani from continuing to try to expand his empire. He’s got a few points on the map picked out, but one spot in particular has got him excited recently: his new home town of Barrington.

Viviani is ready for Barrington, but the question remains: Is Barrington ready for Viviani “Listen, the action goes wherever I am,” says Viviani. I don’t need to be in the action. I am the action. When I show up the action begins. You just wait and see.” 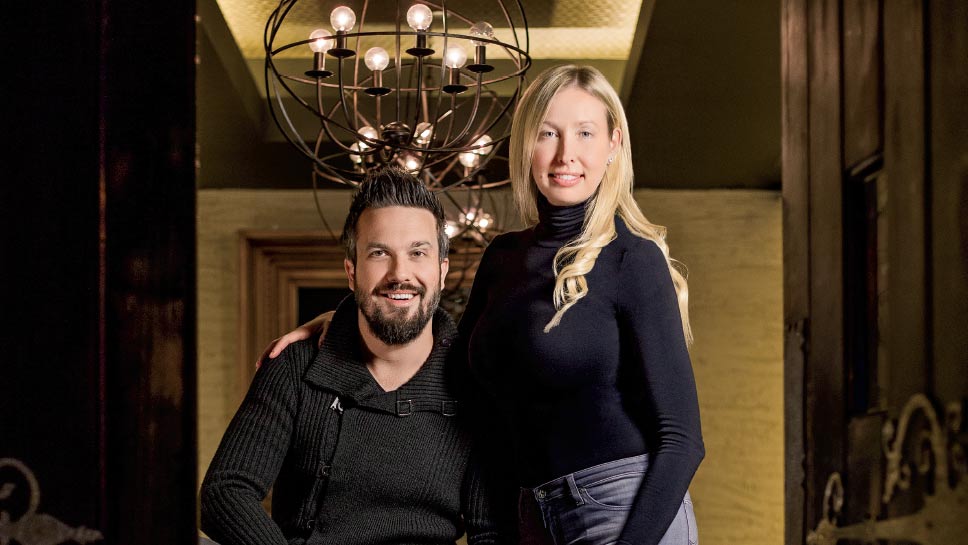 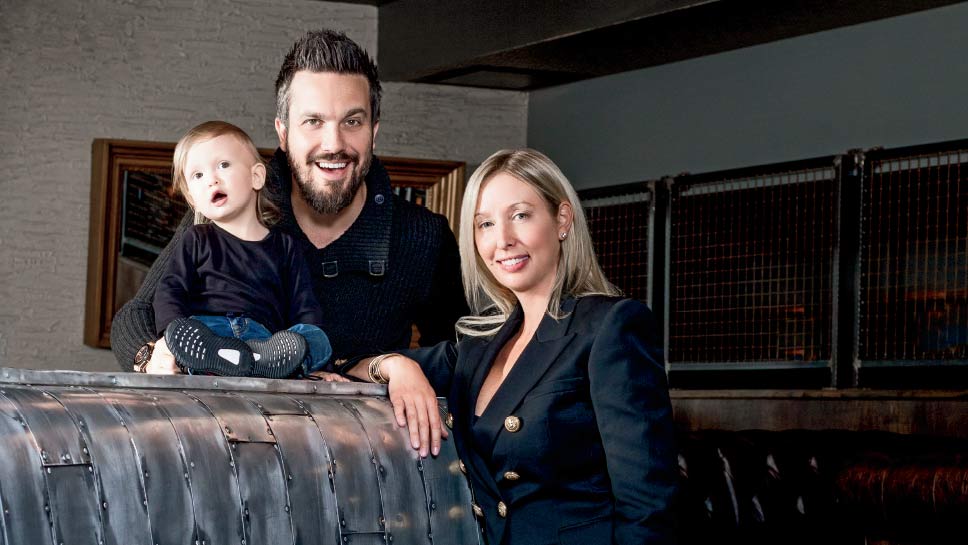