One of the top 10-year-old hockey players in Illinois has already played hockey in Canada — the hottest of the sport’s hotbeds in the world — nearly as many times as he has celebrated his birthday.

Barrington resident Luke Brierley, a fourth-grade student at North Barrington Elementary School, has earned another opportunity to skate in the Great White North. The left-handed defenseman was named last month to the Chicago Jr. Blackhawks Brick team, which will play in the prestigious Brick Tournament July 3-9 at the Edmonton Mall Ice Palace in Edmonton, Alberta. 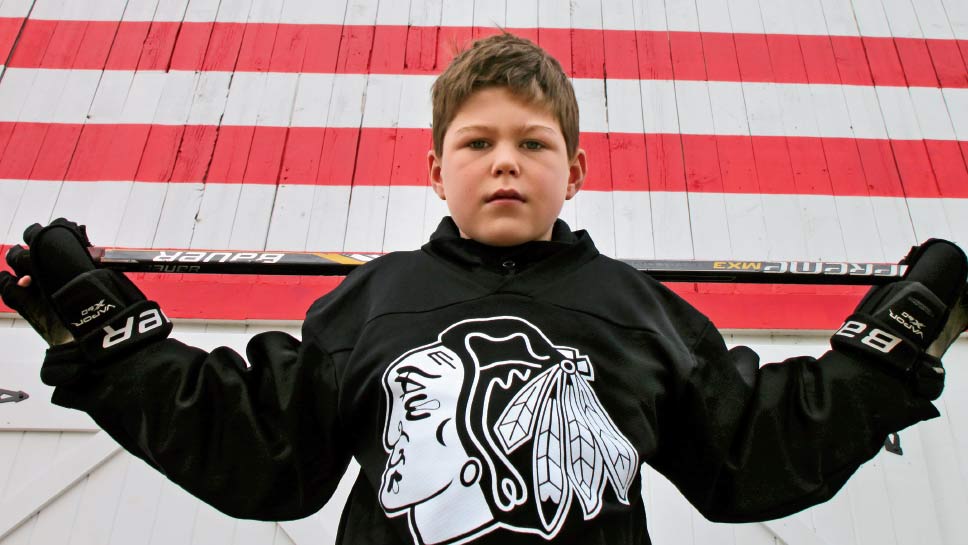 A North Barrington Elementary School fourth grader was recently named to the Chicago Jr. Blackhawks Brick team, putting him on the fast track to future success.

The field features seven teams from the United States and seven units from Canada.

Brierley’s favorite Blackhawk is captain Toews, who wears No. 19 — the jersey number Brierley dons when he suits up for the Highland Park Falcons’ Squirt Major club.

“A leader, a hard worker, and he’s skilled,” Brierley says of Toews, a center, a three-time Stanley Cup winner, and one of the classiest players in the National Hockey League (NHL). “He likes assists and wins, especially wins.”

Brierley is the shiny product of the Barrington Red Wings, a Mite hockey team that called Barrington Ice Arena in Lake Barrington its home rink until the arena closed last summer; it is scheduled to reopen in late spring or early summer, notes Brierley’s father, Jeff.

“The Red Wings program, under the direction of Steve Martins, was the perfect program for our kids [Luke and Drew, 7] at the time we moved from Chicago to Barrington, about five years ago,” says Jeff Brierley, who was a 6-foot-4 basketball player at Hobart College in New York, and whose 5-foot-10 wife, Trish, played softball and soccer while growing up on the West Coast. “The community and its young hockey players enjoyed a ton of ice time — something a lot of communities can’t claim. And the Barrington kids, because the number of players who signed up wasn’t huge, got a lot of attention from coaches.”

Luke Brierley’s typical hockey workout at home takes place in the garage, where he whacks 250 shots on days when he doesn’t practice with his Falcons teammates (at Hot Shot Ice Arena in Lake Bluff) or battle in a game as a shutdown defenseman with a burgeoning set of offensive skills.

“Luke has good hockey sense with a high hockey IQ,” says Ryan Taylor, the director and head coach of the Chicago Jr. Blackhawks Program and a former two-year captain on hockey teams at Lake Forest College. “He can do it all, from being responsible on defense to being effective as part of an attack. I remember in one game he created a turnover from his spot on defense, moved the puck up to a forward, skated hard to catch up to the rush, received the puck, and then took a hard shot.

But don’t think for a second that the 4-foot-3, 80-pound Luke Brierley is a 24/7 hockey fanatic since he first skated at the age of 2. His latest straight-A report card adorns the refrigerator at home; he runs around and wields another stick as a middie in lacrosse; pure joy grips him whenever he grips a Nerf gun; he likes to listen to music by Bruno Mars and Twenty One Pilots; among his extracurricular activities at North Barrington Elementary School is Drama Club actor; and he loves to read books—ask him anything about Among the Hidden, a young adult novel by Margaret Peterson Haddix.

The boy has serious balance in his life.

“What I love to hear from Luke’s teachers and coaches more than anything else is, ‘Your son is such a happy kid,’ ” says Jeff Brierley, whose father, Jim, serves as a youth hockey coach in New York, and whose brother, Dan, was drafted by the New York Rangers of the NHL. “I’ve heard Luke is coachable, a good listener who takes feedback and implements it pretty quickly. From his teachers I’ve also heard how eager to learn and how inquisitive he is.”

Luke Brierley and his Chicago Brick Jr. Blackhawks teammates were scheduled to begin training in early April. One of the team’s assistant coaches is former Chicago Blackhawks defenseman and captain Adrian Aucoin. Stops along the road to the Brick Tournament in Edmonton include tournaments in Chicago, Toronto, and Winnipeg, as well as practice sessions at the University of Notre Dame and the USA Hockey Development facility in Plymouth, Michigan.

Representing Barrington and the Blackhawks organization, all while wearing Blackhawks threads in the birthplace of hockey—it’s a big deal.
The perpetually happy kid has a good reason to be happier these days.

“Hockey is a fast game, and that’s what I like most about it,” says Luke Brierley, who began the second decade of his full, well-traveled life on Feb. 7. “There are too many stops in action in football and in baseball.