When Nick Sauer was 4, he remembers seeing then Vice-President George H. W. Bush visit St. Viator High School in Arlington Heights and the effect his speech had on the crowd. On the car ride home to Lake Barrington that afternoon, Nick wanted to know all about the man he’d seen and the meaning of the gathering he’d watched from his father’s shoulders. 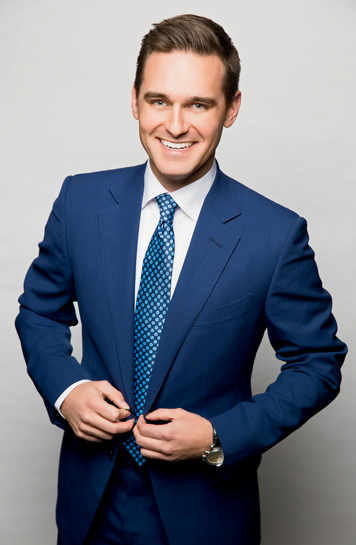 Something about that moment stayed with him and influenced decisions he would make from Station Middle School government all the way to the elected office he now holds as Illinois State Representative.

It happened on Dec. 30, 2016—even earlier than he anticipated after the previous representative resigned. With a quick ceremony and photo shoot, Nick Sauer was sworn into the Illinois House of Representatives for District 51, which includes parts of Barrington, Lake Barrington, North Barrington, Tower Lakes, Lake Zurich, Hawthorn Woods, Deer Park, Long Grove, Vernon Hills, Mundelein, Green Oaks, Mettawa, and Libertyville.

It’s very fitting that Sauer would serve the Barrington area as he credits the culture here as largely responsible for fostering his desire to get involved.

“A community trailblazer, friend, and mentor of mine, Sam Oliver says, ‘If someone in Barrington identifies a problem on Monday, by Wednesday there’s a nonprofit to fix it,’” Sauer says. “Growing up here, I was exposed to leaders and problem solvers, like Sam, who were determined to get things done. My parents were also an amazing example and were involved in community organizations, parent groups, and various leadership roles. As a little guy growing up in Barrington, I witnessed and was shaped by our community’s culture of activism and involvement.”

That involvement started at a young age.

His student government activities in middle school carried over to Barrington High School and into college at the University of Denver—where he double majored in public policy and history.

After graduation, he joined the president of the university’s campaign for governor. This first job out of college exposed Sauer to fundraising, outreach, and volunteer coordinating.

It was a crash course in the non-policy side of politics.

As he moved to Washington, D.C. during the George W. Bush administration to work in the Department of Commerce, he received more helpful words that shaped the path that eventually brought him back to Barrington.

“A friend who had worked in D.C. told me, ‘Nick, the first day you get to D.C. you’re going to be a tourist, you’re going to visit every single monument, and you’re going to be in awe,’” Sauer says. “It was absolutely true. He then said, ‘When the day comes that you’re not looking at the monuments in awe anymore, and you just live there, leave.’ One day I did. I realized Washington, like Springfield, is a work destination and an impressive seat of government, but it’s not a home and government is not a career. It’s a calling. So I decided to come back to Barrington and get involved in the family business.”

Sauer is still involved in the business that his father Bruce built almost 30 years ago, Scarsdale Marketing, which markets and sells for one of the nation’s largest cabinet companies. Nick and his younger brother, Adam, have a second business, Sauer Kitchen Solutions, where they design high-end custom kitchens.

“In small business life, I have seen first hand how our economy, as well as government, affects working people, inspires entrepreneurship, and influences job growth and production,” Sauer says. “The needs of workers, job creators, and families are what drive me professionally and politically.”

These are the concepts that pulled Sauer into public service. In 2009, he was elected to the Barrington 220 Board of Education, overseeing the budget for School District 220.

In 2012, he was elected a Lake County board member, responsible for a budget of just under $500 million. He also served as vice chairman of the Planning and Restoration Committee as a Lake County Forest Preserve commissioner, applying the forest preserve budget to restoration, expansion, and trail development.

Last year, Illinois Governor Bruce Rauner appointed Sauer to serve as a director on the Illinois Tollway Authority Board, managing a budget of more than $1 billion to expand economic development and improve the Illinois system of toll roads.

Now, he leaves all of these political positions behind as he heads to Springfield.

“My number one focus is to save our state,” Sauer says. “Illinois is my home and it’s home to my family and many of my friends. Our state faces some serious challenges, but we have great opportunities as well. I’ve been given a chance to make a difference. I want to do everything in my power to move our state in a better direction and inspire others to call Illinois home.”