Last year, Dr. Sangita Trehan was looking into moving her practice to a bigger space, but when she ended up in an existing practice in Barrington, one of a well known dentist, she felt it was almost fate.

“Sometimes in life things are such a big coincidence,” she says. “I drove by this place all the time and always thought it was such a great location. The day I walked in and looked at it, I knew it was the practice I wanted.” 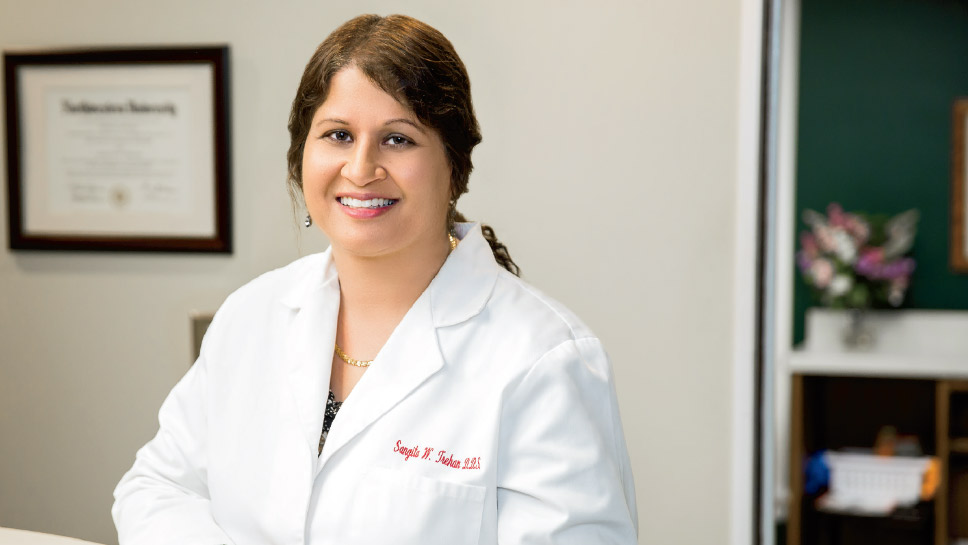 The place she’s referring to was Dr. Richard Hogan’s practice. He had been working in Barrington for 36 years when he decided to retire and sell. Meanwhile, Dr. Trehan had been running a practice on South Cook Street and was hoping to expand to a larger location in Barrington. When her broker called her and said there was a new practice for sale, she never guessed it was Dr. Hogan’s, which was in her dream location.

Since moving in last May, the two practices have merged, and all of Dr. Hogan’s staff has stayed on—including his wife who is a hygienist.
“The continuity of care has been really wonderful,” Trehan says. “The staff had been here for 36 years, so they have formed lasting relationships with the patients. We blended the two offices together, and my staff and patients from the previous office love the new location.”

Dr. Sangita Trehan, known as Sandy to her friends, graduated from Northwestern University Dental School in 1994, then went on to do continuing education in New York. She was certified for Orthodontics in 2000, and Invisalign in 2007. She’s been in the Barrington area for about 10 years now, and it feels like home, which is something she tries to make her practice feel like too. The building used to be a house before it was converted into a dental practice. There’s even a fireplace in the waiting room.

“I really love the homey feel of it,” Dr. Trehan says. “Patients tell me they like the feeling when they walk in the door too, which is important to me.”

Her goal is to make patients feel comfortable, especially as going to the dentist isn’t always a fun task.

“There are very few women dentists in the area, and many of the patients have told me that sometimes it’s nice to have someone with a more gentle touch or smaller hands,” Dr. Trehan says. “Patients have been really happy with the transition, and I’ve been so pleased to have been welcomed so warmly into the practice.”

“I’ve been very pleased with how the existing patients have welcomed me into this established practice,” she says. “It’s been very nice to know people are happy with the transition.”

Trehan Dental specializes in both general and cosmetic dentistry, including Invisalign and Zoom! Teeth whitening. Though combining the practices brought a wealth of new patients, Dr. Trehan is always hoping to help more people feel confident and comfortable with their smile.