Emary never got a photo with the all-time Olympics gold medal leader. However, she was in the right place following Phelps’ 100-meter butterfly. 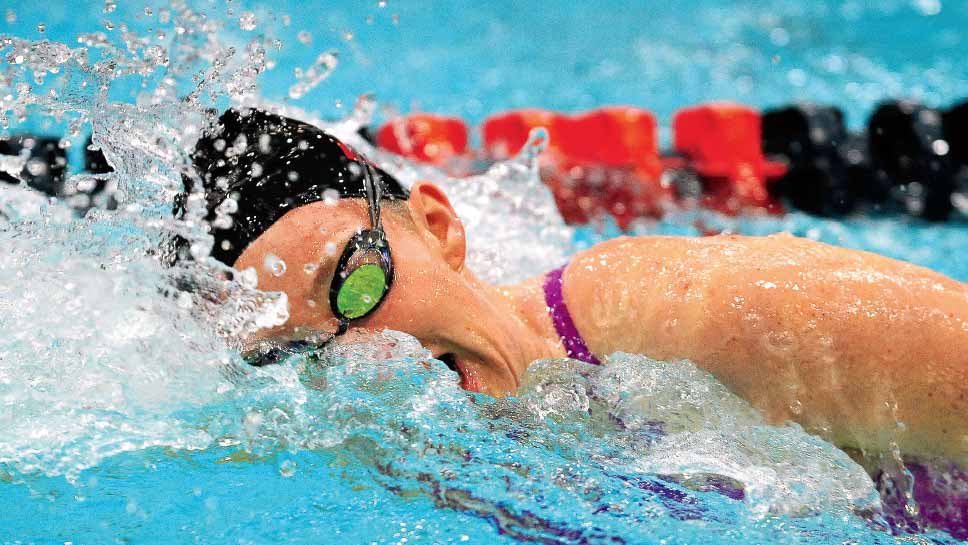 “After the race, I’m in the picture on Instagram,” says Emary, explaining that she had her back to the camera but was standing beside a bearded Phelps. “I’d love to sit down and have a conversation about his career and the journey he’s been through.”

When she competes, Emary almost always is in the picture.

In November, she earned her second first-team, all-state medal for the Fillies in the 500-yard freestyle with another top-six finish at the Illinois High School Association state meet.

Swimming was the only sport Emary pursued growing up in Florida. She returned to the area in sixth grade and has been coached since seventh grade by her father, Rob, head coach of the Barrington Swim Club.

“I just really like how when you’re having a bad day, you can go to the pool and get away,” Emary says. “It’s kind of like a relief. I get so involved in workouts. It’s like my own world.”

Emary has benefitted from great role models. This season, she was needed as a leader for Barrington’s young lineup.

“Leadership is not as easy as people tell you it is,” says Emary. “I wasn’t happy with my 500 at all because I had better hopes, what I went last year.”

As a sophomore, Emary tied for fifth (4:54.31) after taking seventh in 2014 (4:58.65). She became Barrington’s second multiple top-six state finisher in the 500 free with 2016 graduate Kirsten Jacobsen—a four-time state champion in the event and three-time champion in the 200 free.

Following years of training together in high school and club, Jacobsen is a freshman swimmer for the University of Arizona.

“Jacobsen definitely helped to push me because she’s so much faster than I am,” Emary says. “She wouldn’t really talk about races. She’d always go in kind of nervous. I feel like that’s how I go into races, no goofing around.”

Rob Emary was a four-year NCAA Division III All-American at Wheaton College from 1987-90 and won the 200-yard butterfly national championship in 1988.

As a youngster, Emary remembers wanting to join her father at “da pool.” Their relationship hasn’t really changed since he became her club coach.

“He rarely talks about swimming outside of the pool. What happens in the pool stays in the pool,” adds Emary. “Sometimes he’ll be joking around and say, ‘Hey, I heard your coach wasn’t so nice to you today.’ “

“Once a workout is done, it is done. We don’t talk about it on the way home,” Rob Emary explains. “Growing up, I watched some athlete and parent/coach combinations and tried to find that balance of supportive parent as well as her coach.”

Emary was born in Highland Park. She was 10 months old when the family moved and Rob became a head coach in Florida. Magdalena is a first-born female name in her family for four generations. Rob’s grandmother immigrated to the United States from the Netherlands following World War I.

Brother Dan is a Barrington freshman and on the swim team. Maggie enjoys Saturday grocery shopping with her mother, Kim, the family’s “non-swimmer.”

“I like to go to Sam’s Club and get the free samples,” Emary says.

She seeks to qualify in the 800 free for the 2017 FINA World Junior Swimming Championships in August in Indianapolis. Her lifetime-best 8:54.52 is chasing the 8:49.99 qualifying standard.

For major high school events, Emary’s events often are the 500 and 200 free and two relays. Emary rarely swims the 100 back because it immediately follows the 500 free. She got another chance at the Mid-Suburban League Meet and won in 57.43—a school-record by .83—and the 200 IM.

The Fillies captured every swimming event on all three levels—a wonderful sendoff for retiring head coach Jim Bart.
“That 100 back was our plan all along,” Emary says. “Bart was great at always knowing what we needed at certain times. He always looked out for us.”