When you’re passing it from the street, you’d never guess what’s waiting for you inside Amore Mio. The entrance is small, tucked into the middle of a shopping center, and consists mostly of a sign above a single door. But the regulars are devoted to the delicious, authentic Italian food waiting inside and the history of family tradition that owner-chef Antonio Barbanente has brought to Hoffman Estates from, as he puts it, “the heel of the boot.”

The minute we sat down, we were greeted with a plate of the house Bruschetta, one for each of us. It arrives alongside a napkin wrapped basket of warm crusty bread to every table alongside the customary bottle of olive oil and bowl of grated Parmesan. The Amore Mio Bruschetta pares the dish back to the essentials and, in doing so, highlights the freshness of the ingredients and the beautiful, mouthwatering simplicity of toasted Italian bread topped with slabs of sliced Roma tomatoes, shredded basil, and a sprinkling of Paremsan cheese, with a hit of garlic and olive oil. 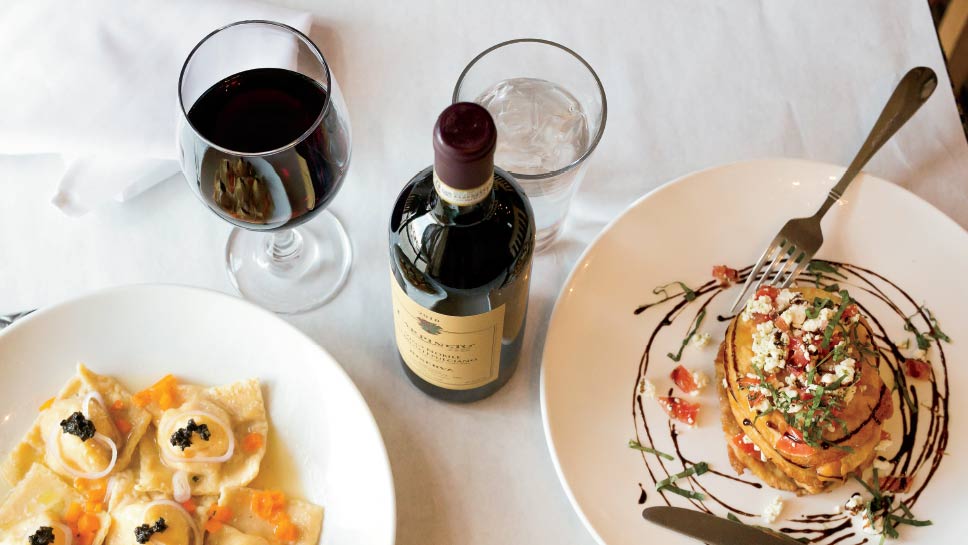 From the Appetizer menu, the Eggplant Tower takes slices of eggplant, pan-crisp crunchy at the edges with warm and chewy centers, and layers them with creamy goat cheese, fresh chopped tomatoes, and basil, all atop a lovely drizzle of balsamic vinegar. We cut into it like a cake and polished off slice after slice. Eggplant perfectly absorbs the flavors it’s paired with and the decadence of the goat cheese against the pops of flavor from the vegetables and herbs make this irresistible.

One of the special appetizers on the night of our visit was the Shrimp and Calamari Salad, with the seafood flown in from Sanibel Island. The shrimp and calamari are prepared and then chilled, served over sliced DeCarlo artichoke hearts from Puglia, Italy; garlic; and lemon parsley vinaigrette. This is the polar opposite from the Eggplant Tower, cool and sharp, with the lemon, garlic, and artichoke combining in a vinegar sting that emphasizes the gentle flavors of the seafood. This, with a glass of white wine, is a great way to settle into a heavier meal.

The wine list is a point of pride as well. Barbanente knows 75 percent of the winemarkers on his list personally. He travels to Vinitaly, the largest wine exhibition in the world, every year to meet the makers and walk the vineyards. There’s a nice selection of Vini Rossi Al Bicchiere e Vini Bianchi al Bicchiere (red and white wine by the glass), but don’t miss checking out the Tuscan reds by the bottle, if not for right now, at least for reference. We were recommended the Carpineto Vino Nobile Riserva from Montepulciano in southern Tuscany and found it lovely and dry, dark enough to complement the incoming pasta but light enough to not offend the seafood.

Inevitably, the homemade pastas are a must. Though Amore Mio represents the classics on their constant menu, we chose the Homemade Ravioli stuffed with ricotta and black truffle mushrooms with shallots, mustard, roasted yellow peppers, basil, and oil. Barbanente stuffs this particular Ravioli with imported Savini Tartufi black truffles, from a family that’s been in the Tuscan truffle business for four generations. The truffles provide a deep, rich flavor bolstered by mild ricotta cheese folded inside homemade pasta with just the right al dente chew. The roasted yellow peppers bring a nice garden zing to the dish.

On the subject of gardens, we sampled the fresh flavors of the Nicolino salad, invented by Barbanente’s father, Nicola. Mixed greens are the base for bursts of sweetness from white raisins and roasted candied walnuts. Crumbles of Gorgonzola cheese deliver a dark bleu aspect, and a housemade balsamic honey vinaigrette fills each bite with a light sweet flavor. During the summer, many of the vegetables on Amore Mio plates originate right down the road from a one-acre plot tended by Nicola on the family farm.

The Beef Braciole was another item off of the evening’s specials menu. Quoted at being 95 percent traditional, the braciole is a nice cut of beef pounded flat and topped with garlic, basil, and Parmesan cheese; rolled up; and slow cooked in a red wine tomato ragù sauce. It’s accompanied by a serving of Amore Mio’s potato gnocchi. Together, the decadent, dense beef against the addictively chewy dumplings are an exercise in appetite. It’s incredibly delicious and extremely filling.

Dessert was a family affair as well. We had the Homemade Cannoli, with a shell made by Barbanente’s father and the filling made by his mother, Francesca. Another example of beautiful texture contrasts, the crunchy shell conceals a sweet, creamy ricotta filling, like a super dense vanilla pudding but a little less sugary. There are mini chocolate chips threaded throughout and a drizzle of chocolate sauce dappled across the top. Not exactly traditional, but we Americans like our cannolis a little sweeter.

From the first course to the last, our night at Amore Mio felt like we were welcomed into a warm Italian home for an evening of cooking perfected over generations of loving tradition. 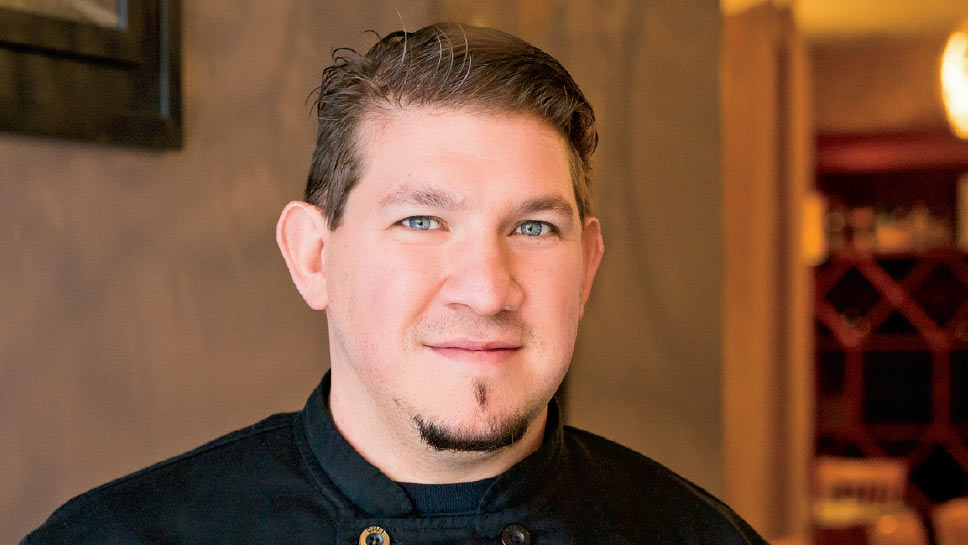 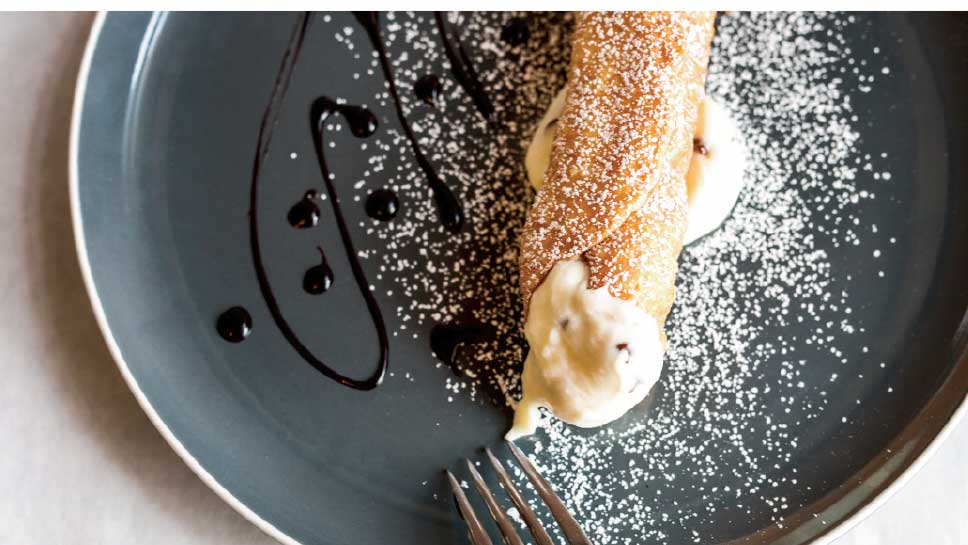