When your name is Dr. Stacie Stephenson, no two days on the calendar are ever the same—and that’s just the way she prefers it. Married to Richard J. (Dick) Stephenson, founder of Cancer Treatment Centers of America (CTCA), she’s found herself as his partner in life, business, and charitable work.

The CTCA was where the Stephensons first met. Stacie had a thriving, independent, integrative medical practice in Indiana when CTCA asked her to come and speak to a select group of the organization’s researchers. It wasn’t long before they were recruiting her to join them full time. “I truly wasn’t interested in being part of a traditional corporate environment,” she recalls. “But then I realized the platform that CTCA was offering me and the opportunity I would have to impact thousands of lives.”

Stacie had been practicing integrative medicine for years—the merging of eastern and western medical practices—when Dr. Mehmet Oz emerged on the scene and made such methods more mainstream. Today, she serves as the Chairman for Functional Medicine at CTCA. “While I miss the one-on-one interaction with patients, I know the work that I’m doing now is helping many more than I could see in private practice.” 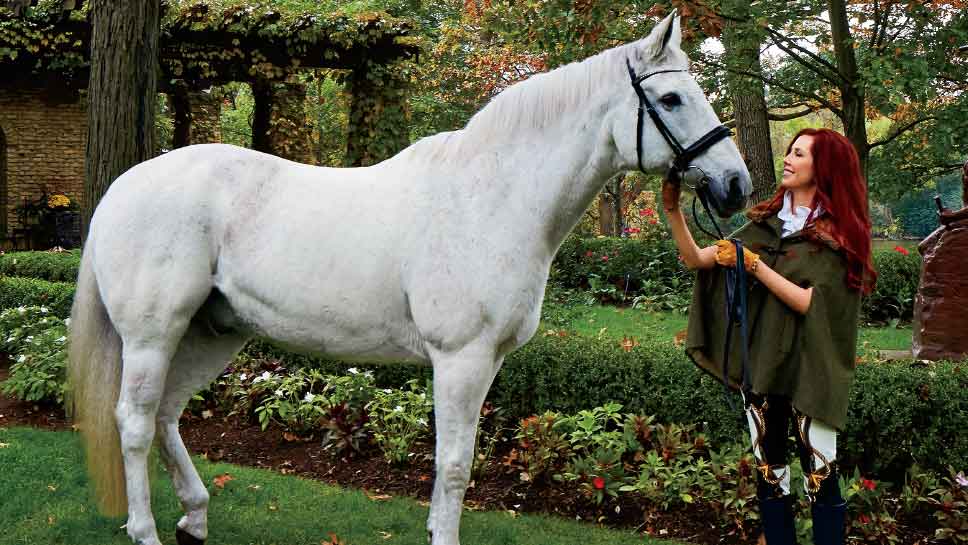 Barrington Hills’s Dr. Stacie Stephenson offers a sneak peek at her life at Tudor Oaks and explains the philanthropic passions she shares with her husband. PHOTOGRAPHY BY ROBIN SUBAR AND KENDALL MCCAUGHERTY FOR HENDRICH BLESSING

CTCA has a non-profit arm called Gateway for Cancer Research. “In the last 12 days, we’ve hosted three charity events,” says an understandably tired Stacie, on the heels of a two-day fundraising celebration for Gateway for Cancer Research’s 25th anniversary. Chairing this annual event for the first time, Gateway raised a record high $4.2 million for clinical trials for cancer patients. Ninety-nine cents of every dollar raised is directly applied to a clinical trial that helps a patient at his or her bedside.

“We’re so proud and overjoyed that we were able to achieve this goal,” says Stacie. “We’ve never chaired this gala together before—and to do it in this anniversary year and have it be so successful is a great feeling. Our hope has always been to have Gateway in the top handful of charities in Chicago. While Dick and I lead and guided this event, we had an army of people who came together to make it happen.”

To kick off Gateway’s evening gala at Navy Pier, the Stephensons hosted the organization’s most important donors at their Tudor Oaks home for a memorable evening, which included performances from multi-award winning musician, record producer, composer, songwriter, and arranger David Foster, as well as the four Tenors.

“It was something out of a movie to have these people at our home,” she recalls.

Inviting guests into their private Tudor Oaks sanctuary shines a light on the significance of Gateway to the Stephensons.

“Dick and I are very tightly connected to Tudor Oaks,” she says, in spite of also having homes in Michigan, Colorado, and Arizona. “It houses so many of our favorite things. Life just feels easier and more simple here. We’re very protective of our privacy, but when we can collaborate with a charity that has the same mission we do—we love to open up Tudor Oaks.”

Tudor Oaks, located on 140 acres of rolling green pastures in Barrington Hills, is an English Tudor estate renovated by Stephenson’s husband. By definition, an English Tudor is intimate and cozy—but under her careful direction, Stacie is maximizing the home’s light and warmth.

“Dick has restored a home that adhered very closely to what makes a Tudor what it is. Everything was a bit dark and heavy before,” she explains, “but that’s not who we are or what our lives are about.” So Stacie turned her attentions to the rooms where people tend to gather most—the sun room and dining room—and her renovation process began.

“The sun room overlooks the water and is filled with the most beautiful, natural light,” Stacie says, offering that she prefers clean lines—but nothing terribly contemporary, always favoring more traditional fabrics and furnishings. “By choosing light colors like whites and greens, it just expanded this room into a space that is very comfortable and inviting.”

It was also important to the Stephensons to have a functional dining room that could meet their needs when they entertained large groups. “In this room, it is really all about the details. Even though it’s a large room, I still want our guests to feel as if they are part of an intimate dinner party.”

As much as Stacie loves these rooms inside her home, it’s the nature outdoors that has her heart. An avid rider, Stacie recalls that some of her happiest moments are riding her horse Steely Dan, or enjoying a romantic carriage ride with her husband.

But her favorite space on the property is the gazebo, one of the estate’s newest structures. “It wasn’t until after we were married, and I was often found in the gazebo, that I heard this story,” says Stacie. “I was told that Dick became consumed with the idea of building the gazebo, constantly on the contractors to get it completed, because he knew he was going to meet someone who would love to be out there. It truly is my favorite place to watch the horses being exercised on the trails, to see the swans sailing, and to enjoy the quiet. This is where life is its most wonderful.”