Dr. Stephen Rivard, founder of Illinois Vein Specialists in Barrington, was working in vein care before vein care was mainstream. He has been at the forefront of vein diagnosis and treatment since 2006 and was among the first in the Country to be board-certified in venous and lymphatic medicine. Dr. Rivard receives most of his patients from doctor and patient referrals, often from other local doctors whose own patients may be experiencing leg pain. “They know me,” he says, “and often send their patients to me to help with diagnosis.”

For generations, varicose veins were seen as more of a cosmetic problem and fodder for comedians’ punchlines, like this one from Woody Allen: “I once went to a masquerade party wearing boxer shorts. I have terrible varicose veins, so I went as a road map.” But it’s no laughing matter to Dr. Rivard (who has himself heard more than his fair share of you’re so “vein” jokes directed at him). “In prior years, veins were ignored,” he states. “Most of us thought that the blood’s arterial flow was what was significant and that the veins were the passive capacitors. Good quality vein care was not really introduced until the last 10 to 15 years with the advent of ultra sonography. This, combined with endovenous laser ablation has allowed us to understand the anatomy of the veins in the legs and to treat precisely the veins that are broken.” 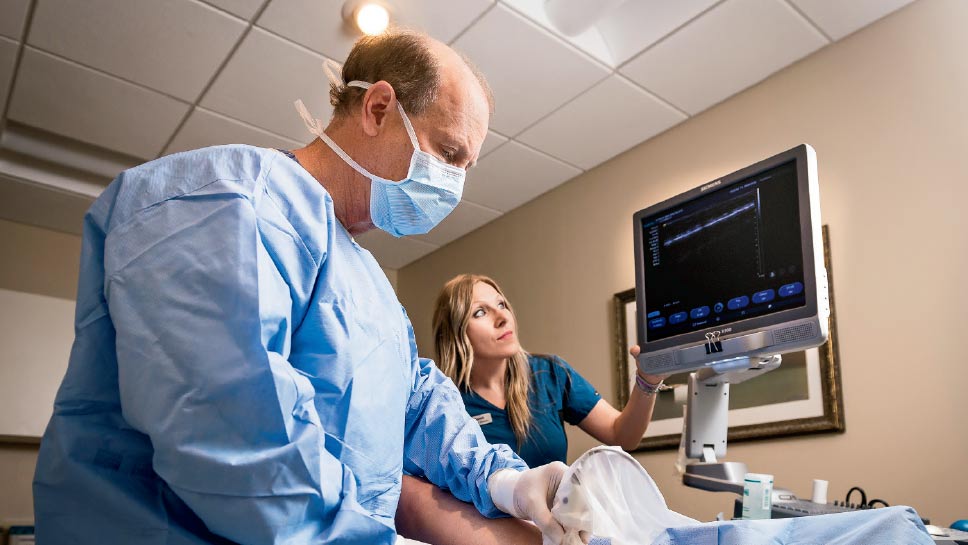 Illinois Vein Specialists is leading the way for the treatment of varicose veins.

What is vein disease? It causes veins to malfunction and not efficiently return blood back to the heart for oxygenation. Blood pools and falls backward through broken vein valves causing the veins to swell and stretch. This creates chronic venous hypertension inside the leg. These veins can swell and push against other tissues and create additional inflammation and pain. Furthermore, wounds may heal more slowly and cell function may be impaired.

The most common symptoms for patients are swelling, aching and throbbing in their legs, Dr. Rivard says. Tingling and numbness can also be indications of poor circulation.

A mistake many people make regarding vein treatment, Dr. Rivard observes, is that if the varicose veins are not painful, they will ignore the problem. “That’s like saying if you have a cavity and don’t feel it, don’t worry about it,” he says. “By the time it does become painful, you may need a root canal. It’s the same with varicose veins. Left untreated, the condition worsens. I have a 95-year-old patient who came to me with open ulcers in her ankles from poor circulation. She had driven herself once a week for wound care over 30 miles away for the last 12 years. She came pleading to see me seeking help. Despite her age, we performed laser therapy on her broken veins. Now, three months later, she is 96 and no longer has pain and her wounds have completely healed. I saw her today and she is thrilled.”

Another common misconception about vein treatment relates to women who are pregnant, Dr. Rivard explains. “Expectant mothers have been told to wait until after they are finished getting pregnant to get varicose veins fixed as they will only recur, but there is no real truth to that. When we perform vein treatment, we expect it to be a permanent fix. If the woman were to have this procedure done before getting pregnant, they may never have to deal with the discomfort associated with varicose veins and pregnancy.”

Educating people about vein disease has been a priority for Dr. Rivard, the result being that he is seeing younger patients than he did when he first started. “The take-away from that is that people are learning at an earlier age that they can get something done and are seeking care earlier in their life,” he said.

Where once the average age of his patients was the early 70s, he is now consulting with patients who are several decades younger, belying the common myth that varicose veins is a condition that mostly afflicts older people. “It’s a genetic phenomenon,” Dr. Rivard says, “and while it may not manifest itself, it can start early in life. My youngest patient is 15-years-old. “

Another common misconception or myth about vein treatment that inhibits people seeking treatment is that this is cosmetic and their insurance will not cover it. Dr. Rivard estimates that 90 percent of his patients are covered have some or most of their treatment paid for by their insurance.

Dr. Rivard spent almost three decades in emergency medicine before changing his focus to vein treatment. “This is an exciting and comparatively new field,” he says enthusiastically. “It’s like being on the ground floor of exploration, and that has been fun and fulfilling for me.”